A Boulder building developer is launching an unusual experiment to save energy and test new models for the next generation of offices. Incoming tenants in a $40 million pair of office buildings set to open soon must sign “net zero” leases.

Energy efficiency has become a standard goal for new construction, but the plan for this development is different. Boulder Commons will try to produce as much energy as tenants consume. A net zero lease lays out how much electricity, or plug load, a renter can use from month to month.

Traditionally, there have been few economic reasons for office tenants to keep their energy use down. Many building owners divide up their energy bill amongst tenants, so there’s little incentive to watch the thermostat. But the Boulder developer, Morgan Creek Ventures, will use track energy use and charge tenants accordingly.

“What is replicable about this model is that this can appeal to tenants who don’t care about sustainability,” said Cara Carmichael, manager of Rocky Mountain Institute, an environmental nonprofit. RMI is the first tenant in the new office buildings.

Net zero leases are rare. But they’re part of an increasingly popular arrangement between tenants and landlords called a green lease, which can save energy — and money. And there’s a lot of room for improvement. Commercial office buildings use about 20 percent of all energy consumed in the United States. Many older buildings are far from energy efficient. 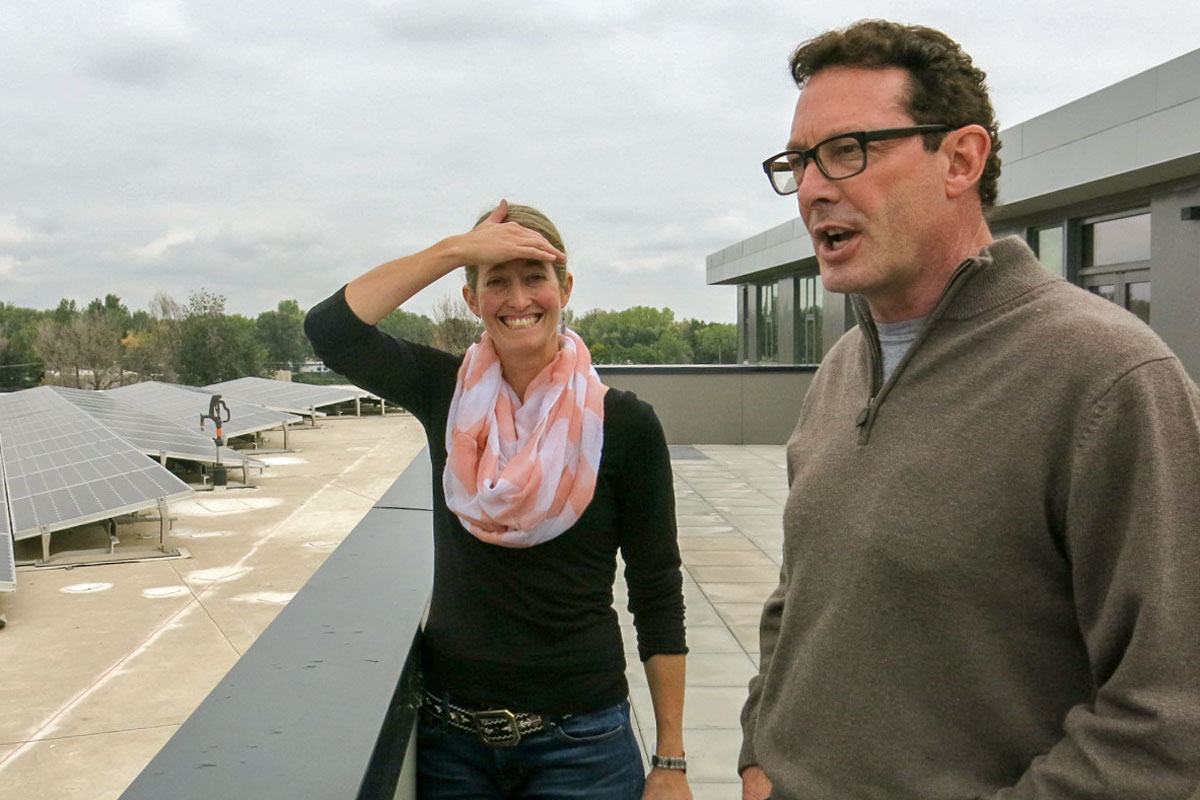 That’s not the case with the energy-efficient new buildings in Boulder, which will host a hair salon, restaurant, coffee shop and traditional office tenants like a law firm. Solar panels on one of each buildings’ walls are the only thing that hints at the extreme energy-saving measures going on inside: triple-pane windows, extra building insulation and extremely efficient heating and cooling systems. The campus also sports bike racks, electric vehicle chargers, green moss plant displays, natural light and mountain views.

“Something sustainable used to look a little weird and awkward and stand out,” said Andy Bush, founding and managing partner of Morgan Creek Ventures. “Now it looks normal and exciting.”

Bush said the project cost as much as 20 percent more to build. But the company plans to operate the building for years — even decades — to reap the rewards of lower than average tenant turnover and cheap energy bills. 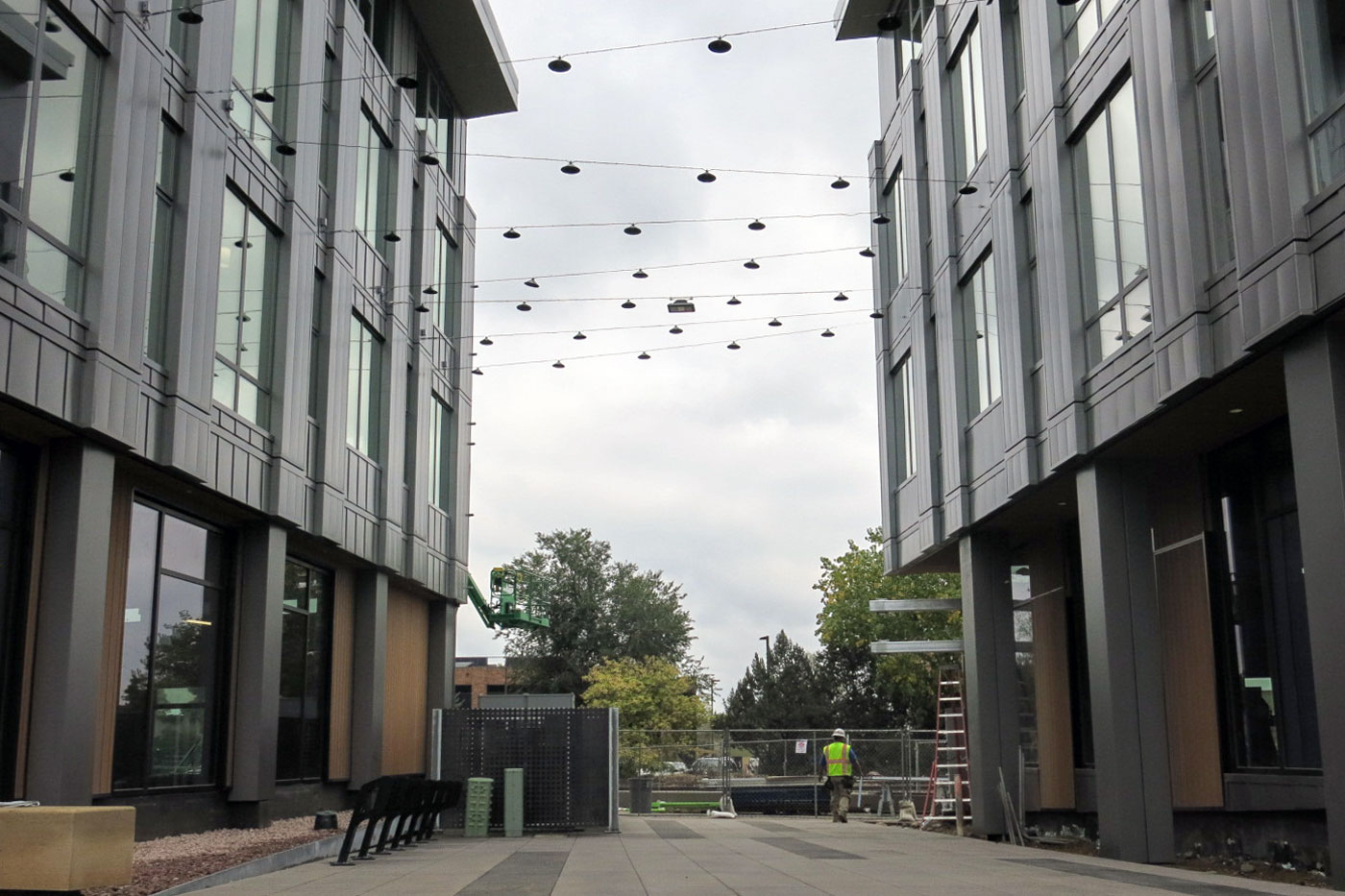 Around RMI’s office space very few lights are in use. Carmichael explains that extremely efficient LED lights are part of the strategy to keep them within their energy budget. So are automatic controls that shut off lights in conference rooms.

In its five-year lease, Rocky Mountain Institute will pay more in base rent compared to its last location. But Carmichael expects to pay less every month in energy expenses. If RMI exceeds its allotted energy use, they’ll have to offset their use with Renewable Energy Certificates. Those are a kind of energy commodity that supports green energy.

In exchange RMI gets an office space with more natural light that’s comfortable, and could be more productive. It also gets financial incentives from Morgan Creek Ventures when workers don’t use parking spots. A pilot project pays workers an extra $75 a month if they walk, bike or ride the bus to work.

Net zero office buildings are popping up, albeit slowly, across the country. The highest concentration is in California, which set a goal to have all new office buildings be net zero by 2030.

Sharp Development Company owner Kevin Bates specializes in revamping old buildings into net zero offices. He says the work can cost up to 30 percent more than a traditional remodel. But the longer he holds onto the buildings, the more they pay off. Through trial and error, he’s learned how to make the business work.

“We’re not doing our seventh one because we’re losing money,” said Bates.

Another prominent example is Seattle’s Bullitt Center. Since 2013, the building met its net zero energy goals in the cloudy Pacific Northwest city. Some years it even pushed energy back onto the grid.

Bullitt Center Communications Director Brad Kahn said the building is successful in part because it has detailed conversations up-front with tenants about their intended energy use. Leases with a hair salon and coffeeshop didn’t pan out because of their higher needs for energy.

“After four years of operations, the Bullitt Center is net positive energy in the cloudiest major city in the lower 48 states,” said Kahn. “If we can do it here in Seattle, I’d like to put a challenge to the city of Boulder to leave us in your dust.” 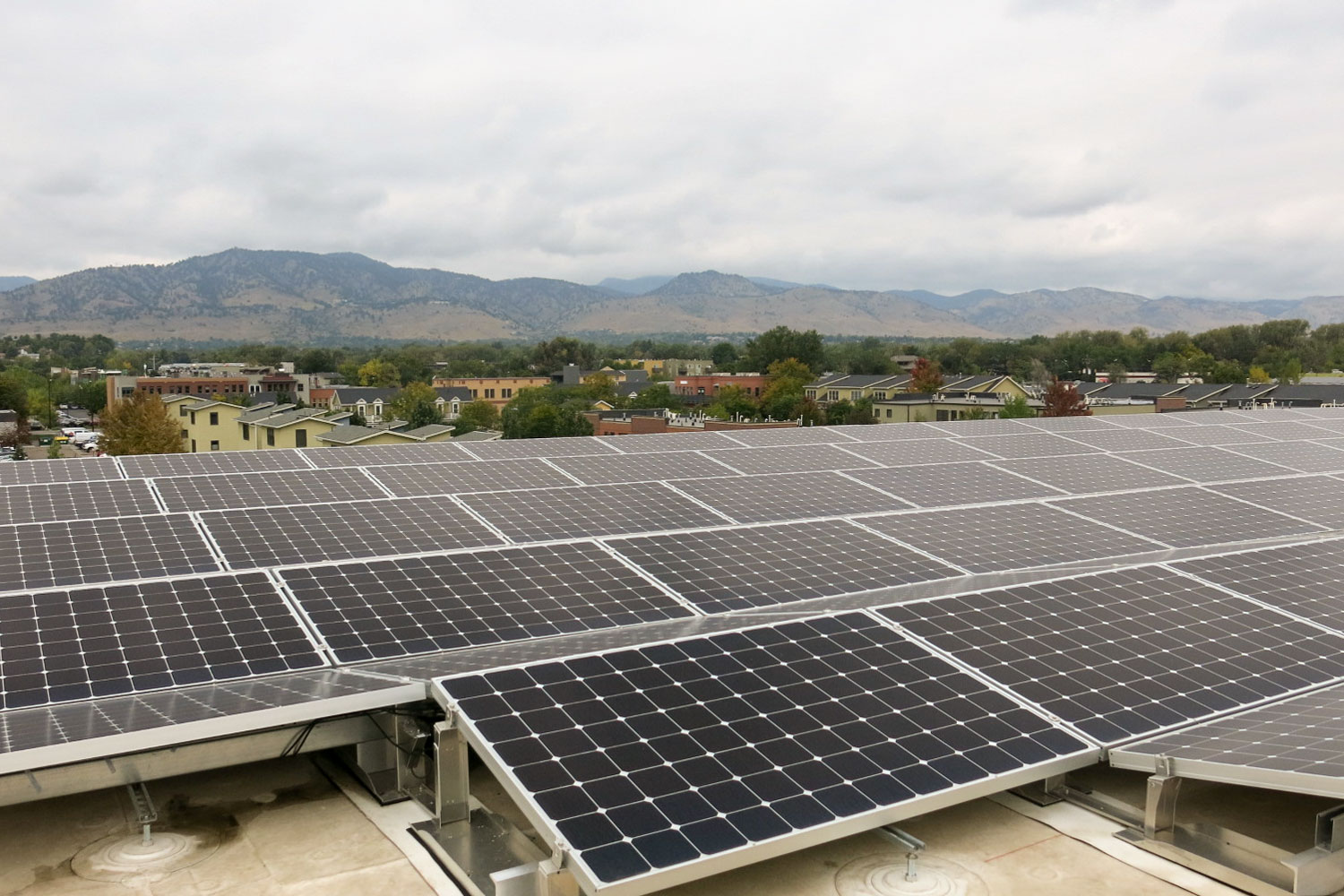 Boulder Commons developer Andy Bush is hopeful about his hair salon and coffeeshop tenants fitting into the net zero strategy. He’s run the numbers. The Boulder building is expected to generate more solar electricity thanks to Colorado’s sunny weather, which will help offset additional energy use from energy-hungry shops.

So will the investment be worth it?

“The real challenge was, how do you put [all the building pieces] all together?” Bush said. “Now it’s, how do we monitor and show it actually does the things that we hoped it would do?”

Bush will have one advantage. Rocky Mountain Institute has already written about the net zero lease experiment and plans to release case studies this December. At that time it will also release a companion report that compares energy and cost savings at Boulder Commons.