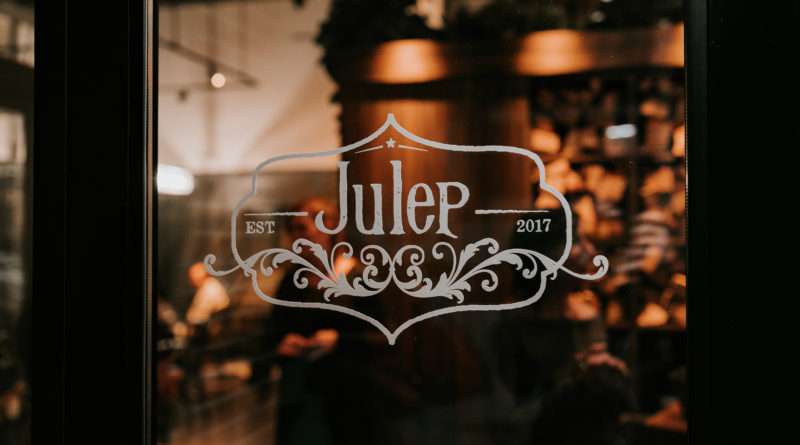 On Wednesday, January 31, Julep Restaurant debuts Southern sophistication and a history-driven concept to Denver’s RiNo District during their soft opening. Kyle Foster, co-owner and executive chef at Julep, is the former chef/butcher at Rebel Restaurant and Colt & Gray in Denver, and Katy Foster, co-owner and spouse, is also the proprietor of Stir Cooking School, located in the nearby Highlands neighborhood. Although they’re vastly familiar with Colorado’s taste buds, they both hail from below the Mason-Dixon Line and have plans to integrate more of their family heritage into the local cuisine.

To stimulate the creative development of the menu the Fosters took trips to Louisville, Kentucky; Charleston, South Carolina; Memphis and Nashville, Tennessee and Dallas, Texas to reacquaint themselves with and to reassess the flavors they grew up on.

“Julep’s menu honors the traditions I learned from my mother, who was born in Savannah, Georgia and my great grandfather, a Kentuckian,” says Mr. Foster. “We use his techniques, recipes and stories to keep the family traditions alive.”

Julep’s kitchen also incorporates the rustic concept of a wood-burning grill as a means “to get back to the primordial instincts of cooking,” says Mr. Foster. “The unique flavors you obtain from cooking over wood adds something special.”

As we enter, the industrial new build diffuses the warmth and elegance of true Southern hospitality as floral wallpaper reflects white and yellow highlights and gas-lamp-like sconces adorn the walls. The layout of the main dining area is homey, yet contemporary, and the bar is backed with rich wood juxtaposed against deep, moody green subway tile, reminiscent of the Louisiana wetlands. An upstairs mezzanine offers an exclusive window view of the kitchen below that lends to a hip fusion of urban entertainment and rural reception.

“We wanted it to be nice, classy and refined,” says Mr. Foster. “But also, inspired by dinner at grandma’s house.”

The night begins with a classic New Orleans’ cocktail, a sazerac, made with rye whiskey. Next, a name we won’t soon forget and the house favorite cocktail, the ‘Cat’s Pajamas’, a take on a Paloma with tequila, grapefruit, lime and honey. Both drinks play with the novel energy and rustic lighting to create a captivating sense of escapism.

The kitchen brings out tantalizing appetizers with smokey cornmeal hotcakes and andouille sausage topped with the “holy trinity” (onions, bell peppers and celery) that draws influence from French cooking techniques.

We sample a plate of bbq-style, deviled snails that receives an unexpected and complimentary textural distinction from a base of rice grits topped with Saltine crackers. Bands of delicata squash are fried up like onion rings and justifies an elevated comfort food dish with fruity and tart notes from the jezebel sauce. The grilled squid veers over the top as our favorite for it’s rich consistency that reaches trifecta status with a Meyer lemon mojo and squid ink sofrito.

More drinks arrive courtesy of Luke Ramos, bar manager at Julep, as he presents a sorghum old fashioned with a sweet syrup, black walnut bitters and a Belle Meade bourbon base. Then a down-and-dirty ginger julep that comes across as spirit-forward, built with Buffalo Trace bourbon.

Like wide-eyed children in a candy shop, we see hearty vegetable dishes draw out from the kitchen with a light broccoli plate that makes our body happy with parsnips, blood oranges, a cured egg yolk and benne seed. The Tokyo turnips provide a good contrast of firm to light textures with a West African influence that exudes through the use of thyme vinegar, peanuts and cayenne. The grilled raddicchio is a standout dish with an eclectic combination of pear brown butter, chestnuts, a poached egg and breadcrumbs. We break the yolk stirring in the golden color to create a creamy dressing atop the reddish-purple leaves making it a viable option for brunch, lunch or dinner.

The progressive evening encompasses even the acoustics as we notice the music turns more tranquil and serene providing a sonic experience that compliments our drinks and our conversation.

The cocktails continue with an ‘Uptown Sour’ made with Cointreau, lemon, egg white and Elijah Craig bourbon and the ‘Pep Rally’ that combines Prairie Organic gin, lemon, pimento syrup and bitters.

A trio of delightful entrees cuts through the evening’s prior flavors to take center stage. The rabbit and Andouille gumbo harnesses a traditionally spicy kick and the juniper and rosemary rubbed Colorado lamb provides an exceptional and substantial main that can convince anyone that yes…you truly do love lamb. A rutabaga and onion tart is sweeter than we’d imagine with nuance caramel notes from the roasted root vegetables.

All at once, in a grand sweep of indulgence we receive the sweet potato crème brûlée with a sweet potato custard, broiled sugar topping and sumac. The banana trifle is made with brown sugar bread pudding, layers of dulce de leche, candied walnuts and dark chocolate. And the pineapple upside-down cake perks up with a scoop of house made pink peppercorn ice cream. Although all three offerings are fantastic the brûlée and trifle rank highest for us as they convey only a preferential hint of sweetness.

Other dishes that top the list for our future consideration are the bologna sandwich that comes with butterbean chow chow and the Southern go-to sauce, sugar-free and notably tangy Duke’s mayonnaise, created in South Carolina in 1917.

“I grew up eating fried bologna sandwiches and a lot of diners in the South traditionally serve it,” says Mr. Foster. “The bologna is pork and beef based and the loaf is made in-house.”

We’re also intrigued by the pork and oyster sausage with malted barley and hopped celery with inspiration from a recipe that dates back to 1885.

“The malted barley, which is used to make beer, is cooked like traditional baked beans,” says Mr. Foster. “The pickled celery includes an influence from cascade hops providing a citrus-bitterness.”

As the evening winds down we opt for a nightcap in the form of a hurricane (rum, lime, orange and passionfruit juice) after we witness another patron order the festive drink. It looks like a vacation that you don’t want to end and captures how we feel about the essence of the whole experience at Julep.

The eccentricities and scope of flavors is unlike many other Southern restaurants and we can only describe our visit as an opportunity to escape to the unexpected to discover the exceptional. Occasionally when history repeats itself we acknowledge it as a negative concept, but at Julep it’s a thorough re-imagination of tasteful, homegrown cooking.

“This has been a labor of love for us and we are thrilled to open Julep Restaurant to the public,” says Mr. Foster. “Our ‘family to table’ concept is an homage to my Southern roots, bringing simply good food and cocktails to Denver’s culinary scene.”