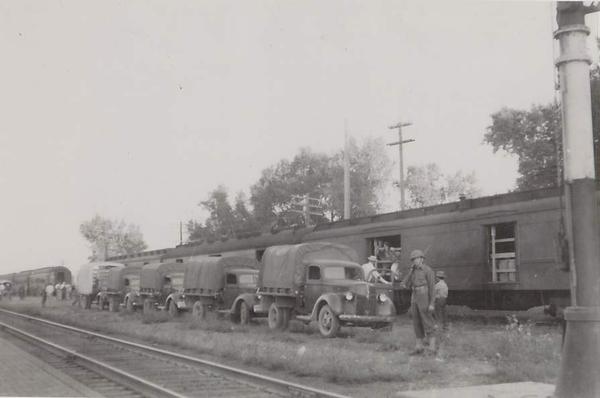 Courtesy of the Amache Preservation Society Internees arrived in 1942 by train from California to Colorado. 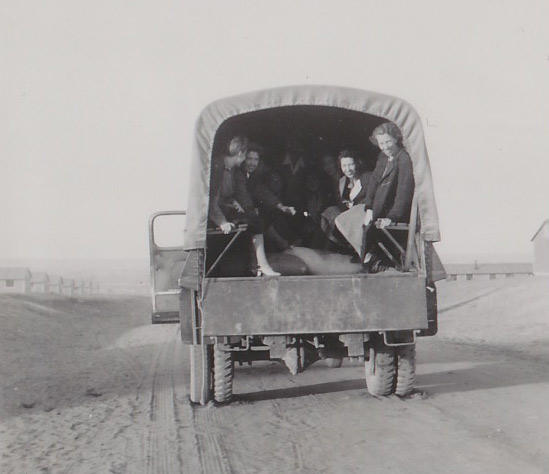 Courtesy of the Amache Preservation Society Trucks took internees from the train to Amache, outside Granada, Colorado. 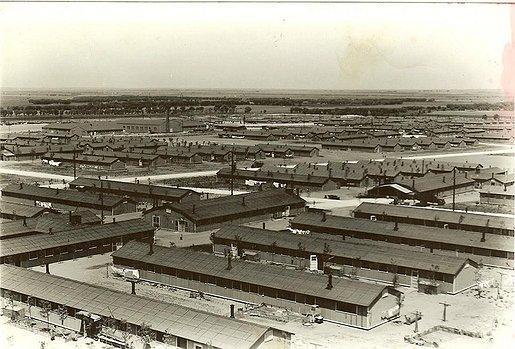 Courtesy of Mitch Homma, the Homma & Wada Family Collection Amache, officially known as the Granada Relocation Center, as it looked when internees moved in. 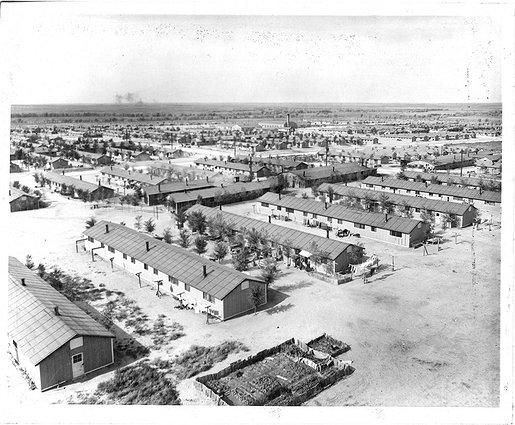 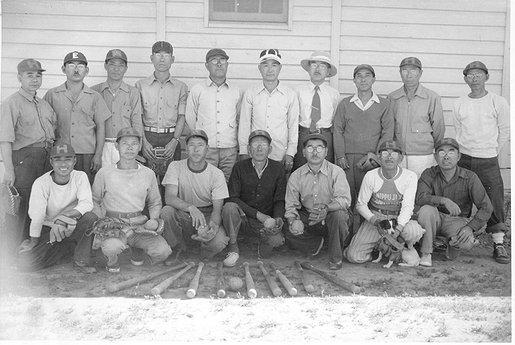 Courtesy of Mitch Homma, the Homma & Wada Family Collection Internees of all ages played sports, including baseball and football. 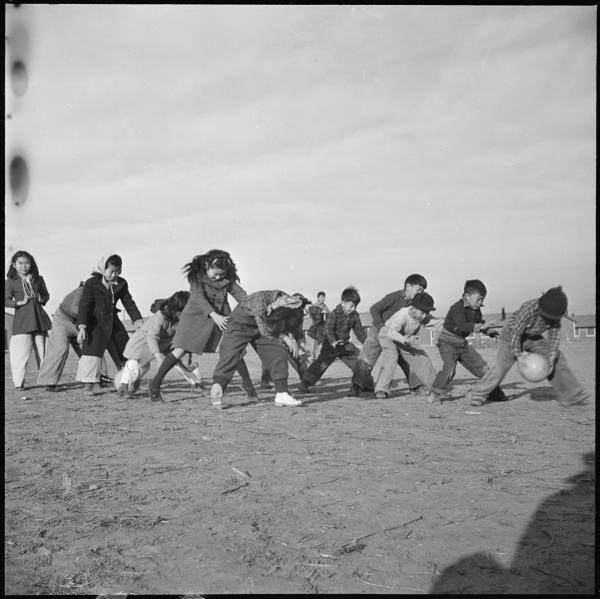 Courtesy of the Amache Preservation Society Morning recess at the elementary school. 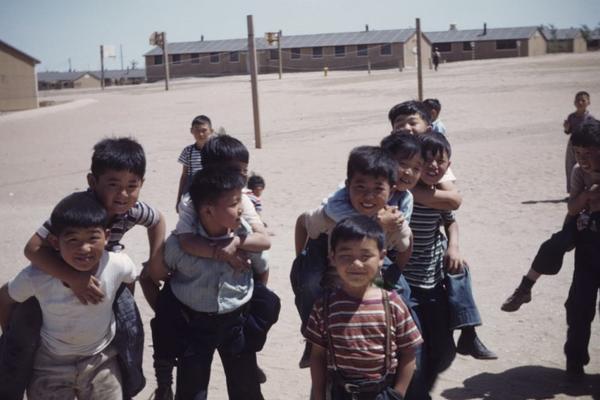 Courtesy of the Amache Preservation Society School children at Amache. The boy scout troop had more than 200 members. 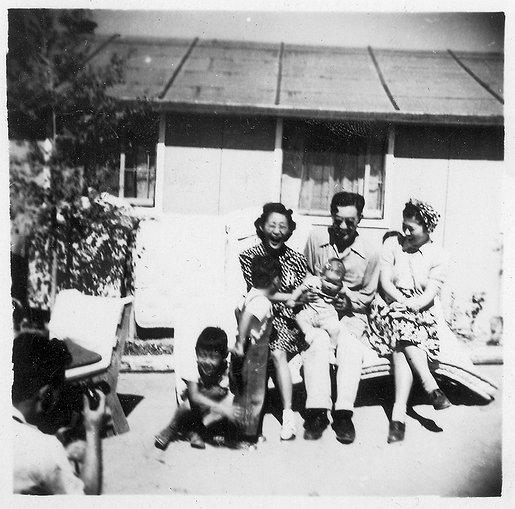 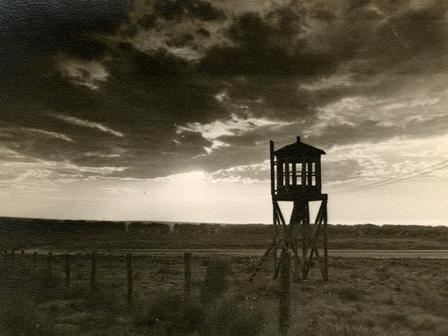 Courtesy of the Amache Preservation Society Guards watched the perimeter from a number of towers. 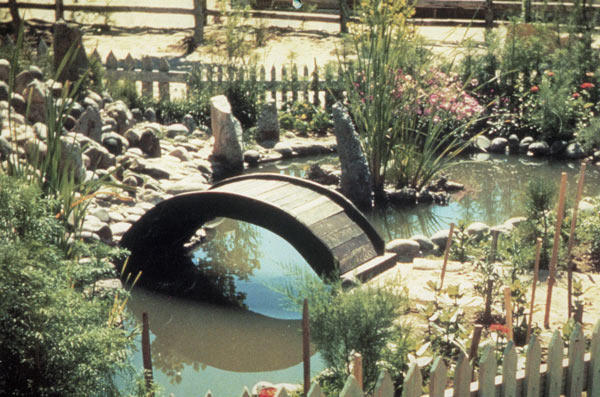 Courtesy of the Amache Preservation Society Residents planted gardens and built koi ponds outside the barracks.

In the spring of 1942, official posters went up across the West Coast and Arizona. All people of Japanese ancestry had one week to report to assembly centers. Ultimately, more than 100,000 Japanese-Americans were forcibly imprisoned in internment camps, many of them located in the Mountain West. This week is when we remember those camps and the people who lived in them.

One of them was a 13-year-old boy named Minoru Tonai.

First, he and his family were moved into converted horse stalls at a racetrack outside his hometown of Los Angeles. A few months later, they boarded a train for Colorado. They’d been ordered to keep the shades pulled down, so they couldn’t see much outside along the way.

Finally, trucks drove them down dirt roads and dropped them off at a place called Amache. These days, it’s a bare, windy hill outside Granada, Colorado, punctuated by a water tower and a small cemetery for people who died there while interned. Other than that, it’s just dirt roads, dying trees, and tumbleweeds the size of armchairs.

But back then, it was a military camp with row upon row of quickly assembled barracks, surrounded by plains as far as the eye could see.

The 13-year-old was not pleased.

“He said he was mad. And he just said it was ugly and it was horrible,” says John Tonai. That 13-year-old who arrived at this site almost 80 years ago was his dad. At about the same time, Tonai’s mom had just arrived at a different camp, in California.

Tonai is a photography professor with the University of Northern Colorado and he’s spent years visiting and photographing former camps.

“It's a unique shared history that we have that other people don't have. It's a very small part of what happened in America that most people don't get,” he says.

The government wanted Japanese-Americans away from the coasts and from important military sites. So they built 10 of these camps, many of them out in the plains or desert, surrounded by barbed wire and guard towers armed with machine guns and searchlights.

When Tonai's relatives -- his dad, grandparents, aunt and uncles -- moved in, their barrack had a few cots, a bare light bulb and a potbelly stove for heat. The bathrooms didn’t even have dividers between the stalls yet. And there there wasn’t a single tree in sight.

The internees took care of that pretty quickly, planting Chinese Elm tree saplings all around camp.

“I think just to make it look less austere, because imagine -- it was just flat ground,” says Tonai.

No one knew how long they’d have to stay here. But over the three years of its existence, the site held over 7,300 internees.

“It was a city. It functioned like a city. It’s just there was barbed wire and guard towers,” says Tonai.

In fact, it became the tenth largest city in Colorado.

Boy scouts raised the American flag every day at the elementary school. Young men went off to war to fight for the country that had imprisoned them. Residents built koi ponds and grew vegetables. There was even a tofu factory and a silk screen shop, where internees printed recruitment posters for the U.S. Navy.

But Tonai says making the best of a bad situation didn’t erase the pain of being labeled an enemy.  His relatives were full of shame and anger, he says, “That they were locked up. That they were different. That they were considered potentially an enemy.”

Internment was hard on everyone, but at least the kids could go to school. Tonai’s grandfather had been a fisherman and a grocer. He didn’t have much to do out here in the dry plains. So instead, he started trapping birds and hunting rattlesnakes.

“He’d kill the rattlesnakes, cut off the rattles. And when I was younger he gave me one whole skin, a bunch of rattles and a couple of their fangs,” says Tonai. He also started carving figurines out of wood, art that’s now referred to as the art of gaman, which means to “bear the seemingly unbearable with patience and dignity.”

It was three years before the war ended and Tonai’s family returned to California to start rebuilding their lives. When they did, Tonai’s grandfather brought a memento with him.

“He dug up a cactus and put on a little little vase and took it to L.A. with him,” he says.

It was a scraggly little cactus, about the size of a fist.

“It had to be really special to my grandfather for him to care,” he says, “But to me just doesn't make sense, maybe because it came from such a bad place.”

Tonai says for as long as his grandfather lived, he barely ever mentioned "camp," but he kept that little cactus alive, prominently displayed at the front of the house. These days, Tonai says the news keeps reminding him about that piece of history.

“I remember the first time I saw the ‘America First’ slogan and I thought, ‘Are we returning to that kind of attitude?’” he says, to that particular brand of fear and nationalism that led to his family’s imprisonment.

It turns out, others may be thinking the same thing. For years, Americans of Japanese descent have made annual pilgrimages to visit one of the bigger internment camps -- Manzanar, in California. Lately, they’ve started inviting along their Muslim neighbors.