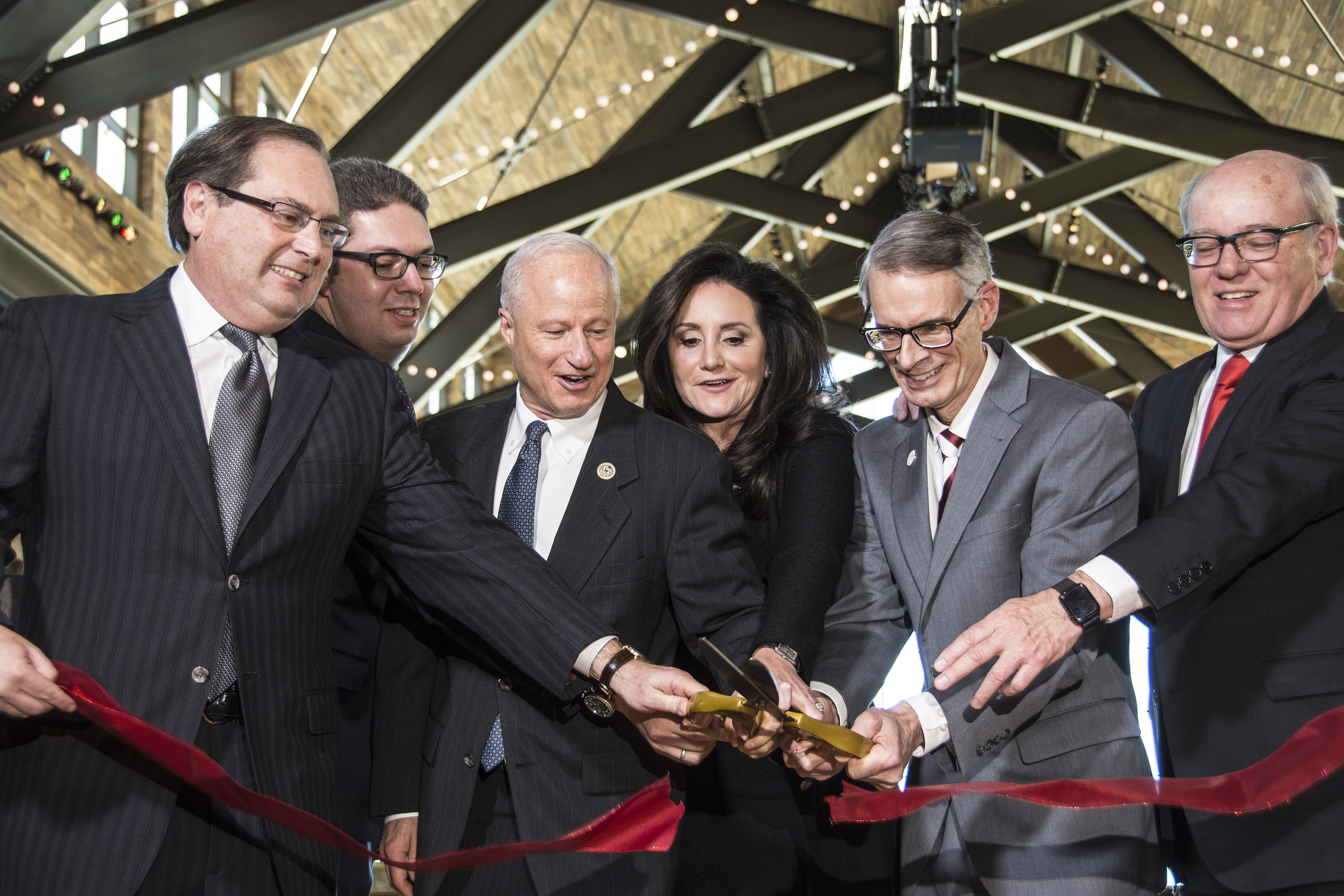 There was fanfare accompanying its debut, but before that it had angered downtown Denver hotels, survived numerous legal challenges and cost hundreds of millions in tax incentives.

“There were folks who did not want to see this major project become a reality,” said RIDA Development CEO Ira Mitzner. “And yet, and yet, because of this project, because of each and everyone of you, there will be half a million people visiting this great state who would not have come.”

He said more than 80 percent of bookings would not have chosen Colorado, a nod to criticism that the project would divert from downtown.

The enormous structure comprises a convention center and resort, and like other Gaylord concepts, it’s designed to be self contained — convention-goers never need to leave the property. That’s probably a good thing, because it’s about a 40 minute drive to downtown Denver. The surrounding area is a mix of open fields, apartment buildings and single family homes.

Inside the hotel there are 1,500 guest rooms, 485,000 square feet of convention space, indoor and outdoor pools with water slides and a “lazy river,” among other amenities.

“It’s kind of like Bass Pro Shops... meets a hotel,” said Janet Hale, an airport employee who drove over to check out a project she’s seen under construction for about three years.

The Gaylord Rockies Resort required a combination of almost $400 million in incentives tied to future revenue, mostly from the city of Aurora, and more than $80 million from the state. Opponents, including downtown Denver hotels, fought to stop the project, arguing it would cannibalize convention center traffic, taking one case dealing with state incentives all the way to the Colorado Supreme Court.

There are conventions that mostly travel to Gaylord-branded properties. Proponents have long argued it would grow the overall market, rather than detract from downtown.

“I assure everyone in the great state of Colorado that you’ve made a wise investment in your partnership here with Marriott and Gaylord brands,” said Bonnie Godsman, CEO of GAMA International, one of the first large convention guests to book at the Gaylord.

It will bring thousands of financial professionals to the region, a number that is too many to fit in convention space downtown.

The project’s lifespan lasted through three Aurora mayors, noted Bob LeGare, the current mayor, who said he first heard of it almost a decade ago. His predecessor, Mayor Steve Hogan died of cancer before the project finished and will be honored with a plaque in the hotel.

“So for Aurora, Adams County, the state of Colorado, this Gaylord Rockies investment is just off-the-charts phenomenal,” he said . “It’s going to bring people here to see the great community, and we’re going to have a wonderful place for people to gather to see out beautiful city and state.”