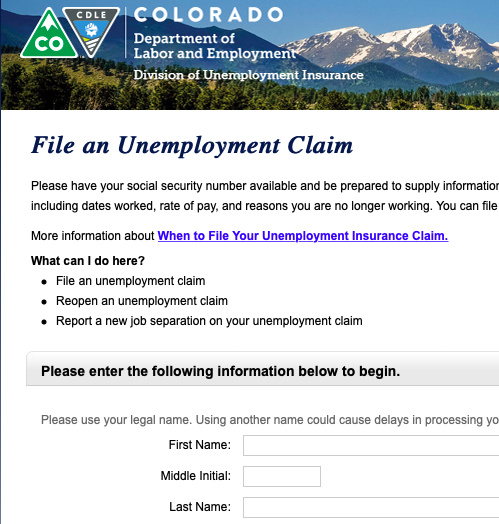 Since the partial government shutdown began last month, almost a fifth of the unemployment claims filed in Colorado have been from federal workers.

Data from the state Department of Labor and Employment shows that more than 2,300 federal workers have filed unemployment claims as of January 17th. Of those claims, four percent have been filed in El Paso County, two percent in Pueblo County and one percent in Fremont County. Jefferson County, on the west side of Denver, has the highest number of claims filed so far, with 22 percent of the state’s total.

Earlier this week, El Paso County sought to reach more than 2,400 food stamp recipients who needed to complete “redetermination” documentation in order to continue receiving their benefits next month. Because of the partial government shutdown, benefits from the Supplemental Nutrition Assistance Program or SNAP are being distributed earlier than normal. Despite the county’s effort, close to 60 percent (1,471 out of 2,400+) of those recipients have redetermination files that remain incomplete several days past the deadline. A representative from El Paso County said that’s nearly double the usual number -- in a typical month, about 35 percent of the redetermination files are not returned.

The county is encouraging families who did not submit their redetermination paperwork by the deadline to do so ASAP, and definitely before the close of business January 29. Redeterminations will be processed, and they will receive food assistance if funds are available, according to the county. New applications should also be submitted before close of business on January 29. Completed applications, including interviews, that are processed by then may be eligible for prorated amounts of assistance, to make up for missed benefits in January and February.

As the shutdown continues, the USDA is relying on a provision in the stopgap funding measure that expired on December 21, 2018, allowing the federal government to make certain payments within 30 days of that expiration. The move provides the $4.8 billion needed to cover February SNAP needs. In addition to extending funding for SNAP, the USDA also announced that funding for the Special Supplemental Nutrition Program for Women, Infants and Children or WIC will also continue through February.

According to El Paso County, there is no information available about March food assistance. Households receiving Food Assistance are encouraged to stretch their food dollars as far as possible.

Community resources for those affected by the shutdown

If your business or organization would like to be added to this list, please send an e-mail with details to news@krcc.org.