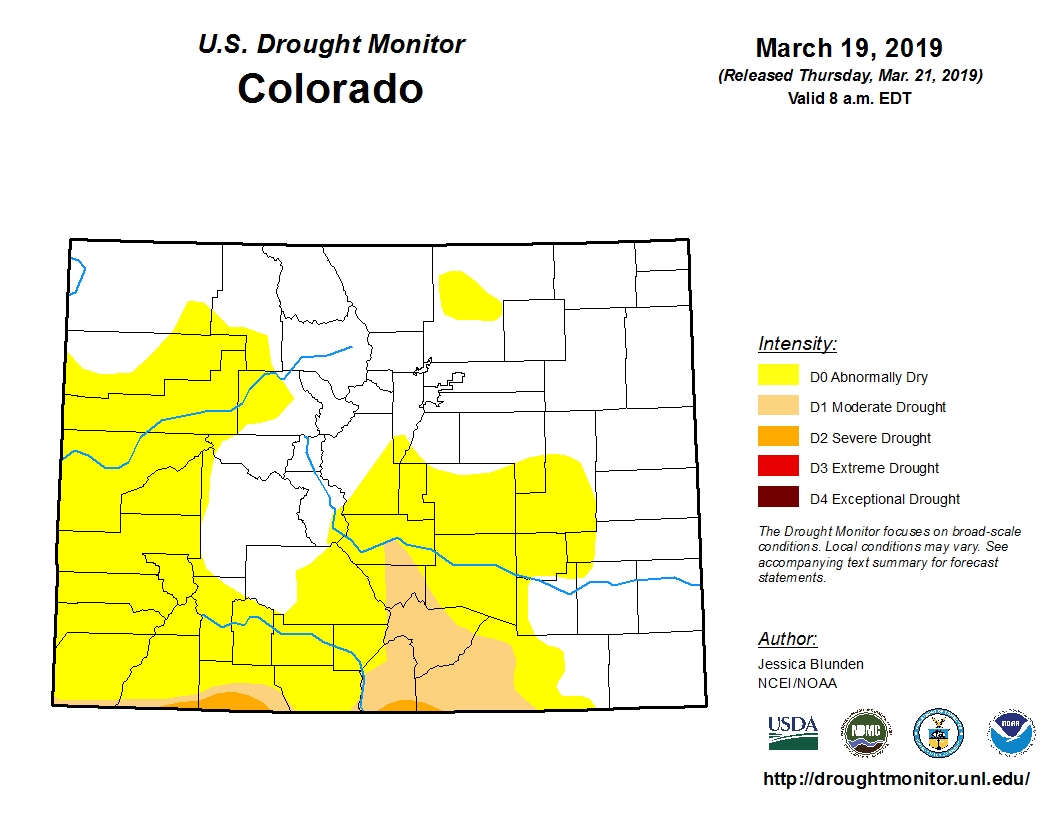 What a difference a snowy winter makes. Thanks to the recent storms, drought conditions in Colorado are consistently improving and the state may be drought-free by the end of spring.

The U.S. Drought Monitor reported Thursday that more than 50 percent of the state is free of drought conditions. That’s a rapid improvement compared to last fall when more than half the state was under “severe drought” or worse. Last week, before the historical “bomb cyclone” rocked the state, only 17 percent of Colorado was drought-free.

State climatologist Becky Bolinger said the storm was key to the improvement, especially along the Front Range and in the Eastern Plains.

“A lot of the area saw an inch total of precipitation for the week, which is a really good amount,” she said. “As you go further south and into areas that have been in more severe drought, improvements were partially due to a lot of the precipitation that fell last week.” ​

Bolinger said the San Juan Mountains in southern Colorado have been consistently getting “a regular pumping of moisture.”

“It’s not one specific storm but (an) accumulation of the many storms that we’re seeing that have led to these huge improvements,” she said. “This was really the winter we needed. A spectacular recovery from what we had last year.”

Increased snow and rain in February and March caused the snowpack in the state to be at least 126 percent above normal. Copper Mountain has already set a snowfall record with 88 inches of snow.

The National Oceanic and Atmospheric Administration reported this winter has been the wettest on record for the lower 48 states.

It’s likely Colorado will have no drought conditions marked on the map over the next few weeks with the precipitation forecasted this spring, Bolinger said. The state will only see further improvements as the snowpack melts.

“We have a lot of extra moisture that’s just waiting to melt and recharge all those systems that were heavily drawn down from the drought last year,” she said. “We're confident that we’re going to see a lot of the reservoirs fill again.”

The state is in a good position to avoid an extreme wildfire season because of all the moisture Colorado has received.

“A total switcharoo from last year,” she said. “It’s quite amazing to see and I’m looking forward to seeing maybe no drought on that map very soon.”