Welcome back to street sweeping season.

And yes, for many that time of year is rung in with the sound of groans as many in Denver and elsewhere lament an onslaught of yellow-enveloped tickets.

It really is an onslaught: Last year, Denver issued more than 160,000 tickets totaling more than $8 million in fines.

But street sweeping is not about ticketing. It's actually an exercise in environmental maintenance.

Patrick Potyondy asked CPR’s Colorado Wonders project what the deal is with street sweeping, and how long the city has been at it.

The deal, simply put, is pollution control. Each year, Denver Public Works collects enough street gunk to fill Coors Field nine-feet deep. In numbers, that amounts to over 77,000 cubic yards collected in 2018, weighing in at over over 155,000,000 pounds.

Without street sweepers, much of this could end up in the air Denverites breath, or in watersheds after rain washes it into stormwater systems.

While the bulk of the material Public Works has collected is run-of-the-mill dirt, there are plenty of compounds within the collected masses that could cause concern. 2018's haul included almost 650,000 pounds of petro hydrocarbons, a type of chemical related to oil; 300,000 pounds of nitrogen, which comes from cars, power generation and farming in the region; and about 95,000 pounds of phosphorous. Copper, lead, zinc, chloride and mercury were also represented, though in lower concentrations. 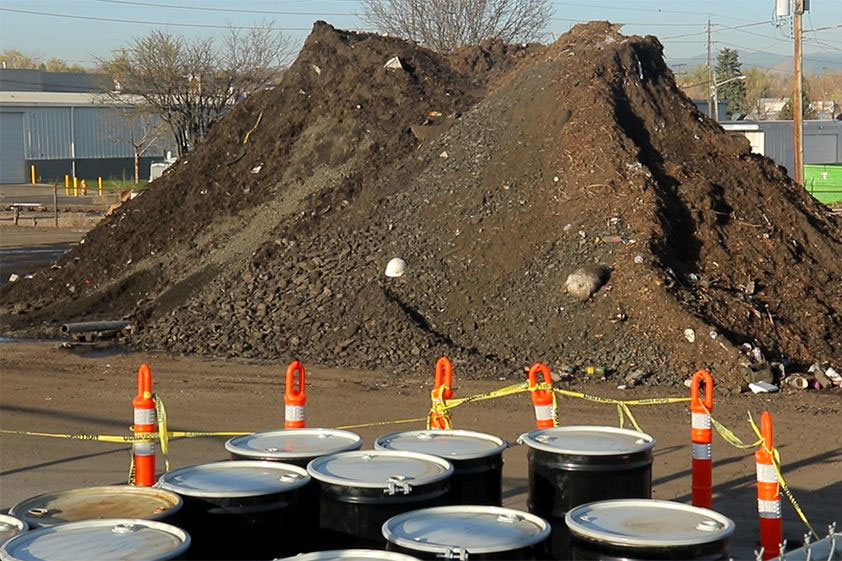 Brad Cox, a stormwater system manager with Denver Public Works, said most of this stuff comes from vehicles on the road. There's a lot of friction within a car or a truck's internal mechanisms, so debris from brake pads and tires are likely culprits.

Denver's 2018 sweep season resulted in the highest mass of material collected since 2012. It's nearly doubled since then. Public Works says that's partially due to more efficient sweepers on the city's streets.

Colorado has seen growing numbers of cars on the road in recent years, and with many of those in the metro area, it's likely that trend plays into increases in street pollution too.

Beyond these sweeping efforts, the city is also working on some projects to install "green" storm drain systems that use gravel and plants to filter what the sweepers miss before that material might hit rivers and creeks.

While sweeping is pretty effective, the clean-up is limited when cars are left on the roads, since much of the stuff sweepers aim to clean is found nestled right at the curb. Hence the tickets tucked under your door handle.

Public Works views street cleaning as a collaborative exercise between drivers and their sweepers, though they do use the threat of a ticket as incentive to keep the brushes spinning.

The general sense around Public Works is that Denver began sweeping in the early 1900s. We found photos in their archive that shows horses and even Model T-looking cars pulling street sweeping apparatuses.

One image of a horse-drawn sweeper is labeled as "1899?" and could point to earlier origins.

For any Denverites out there looking for some guidance on when to move your car – you know, for the sake of the environment – Public Works has worked up a handy map to keep you in line.