Several years ago, art teacher Jessica Ruby started to notice something concerning at the end of each class she taught.

“I would give them their art and they would walk by my trash can and throw it away on their way out of my room,” said Ruby, who teaches at Pete Mirich Elementary in Weld County School District RE-1. “I thought, ‘What’s happening? What’s making them do this?’”

Research and reflection led her to the realization that she was usually following a set plan: Her students all made the same thing as she instructed them on how to do it.

“There was no room for creativity,” she said. “Everything was preplanned for them. There was a moment where I realized, ‘Oh, these are my ideas and not my students' ideas.’”

This is common in art classrooms, Ruby said. But it’s not how artists work. She decided to overhaul her whole approach.

Now, instead of a predetermined project, students in Ruby’s class choose one of multiple art stations to work at: metal embossing, bookmaking, pottery, sculpture, photography, fiber and painting. Sometimes there are temporary stations, like origami. Each is relatively cheap to set up and students are free to pick whichever they want each day.

Ruby circulates and helps when needed.

The result is less orderly than her old classroom, but students get a chance to dig deeper into their own projects. Tyler Dalgliesh, a 4th grader at Pete Mirich, loves the book making station.

“I’ve already completed my first book,” he said. "But it’s not published.”

His first book is about “all the llamas and sheep I’ve ever thought about” with creative twists like a story about the “majestic llama,” a king llama with rocket boosters for hooves.

In The Chaos, A Lot Of Learning

Beneath the boisterous appearance, there’s purpose and order. Ruby taught her students “studio habits of mind” and different steps such as stretch, explore, persist and reflect. They’re modeled on the steps that artists follow to guide their art. In the process, students develop essential skills – and play.

“It's important to have students play because they're still learning something valuable about that material and things that they can do,” she said. “It opens up parts of you and your process to new things.”

The kids relish the freedom to be creative. Third-grader Alexis Rocha Loya remembered art class at her old school.

“I felt down, I just wanted to make something different than what the teacher was making,” she said. Then when Rocha Loya entered Jessica Ruby’s class, she was taken by surprise. “This is like some new world than that other school,” she said. “It’s not like normal teachers where they say, ‘Class, we’re going to be learning to do this today and you have to do this.’”

The Philosophy Of Disorder

Creativity is on the decline in children in the United States, according to the Torrance Tests of Creative Thinking. Those tests, which have been administered for decades, have found a decline in creative thinking scores among students since 1990.

Those findings helped spur Ruby’s classroom overhaul. She based her approach off a rubric for teaching art called TAB – teaching for artistic behaviors. The nationally recognized philosophy focuses on student choice: Students are artists, tasked with coming up with art problems to solve and pushing through difficulties by collaborating with classmates. They determine what the purpose and meaning of their work is. For example, students may focus on how to improve a skill or create a gift, not make a masterpiece. They also learn to reflect on their work and the work of their classmates.

Ruby was also drawn to a TED talk by Cindy Foley, executive deputy director for learning and experience at Columbus Museum of Art, called “Teaching Art or Teaching to Think like an Artist?” It focuses on creating art classrooms where curiosity reigns and teachers help students “develop the capacity to think creatively and the capacity to make connections.” 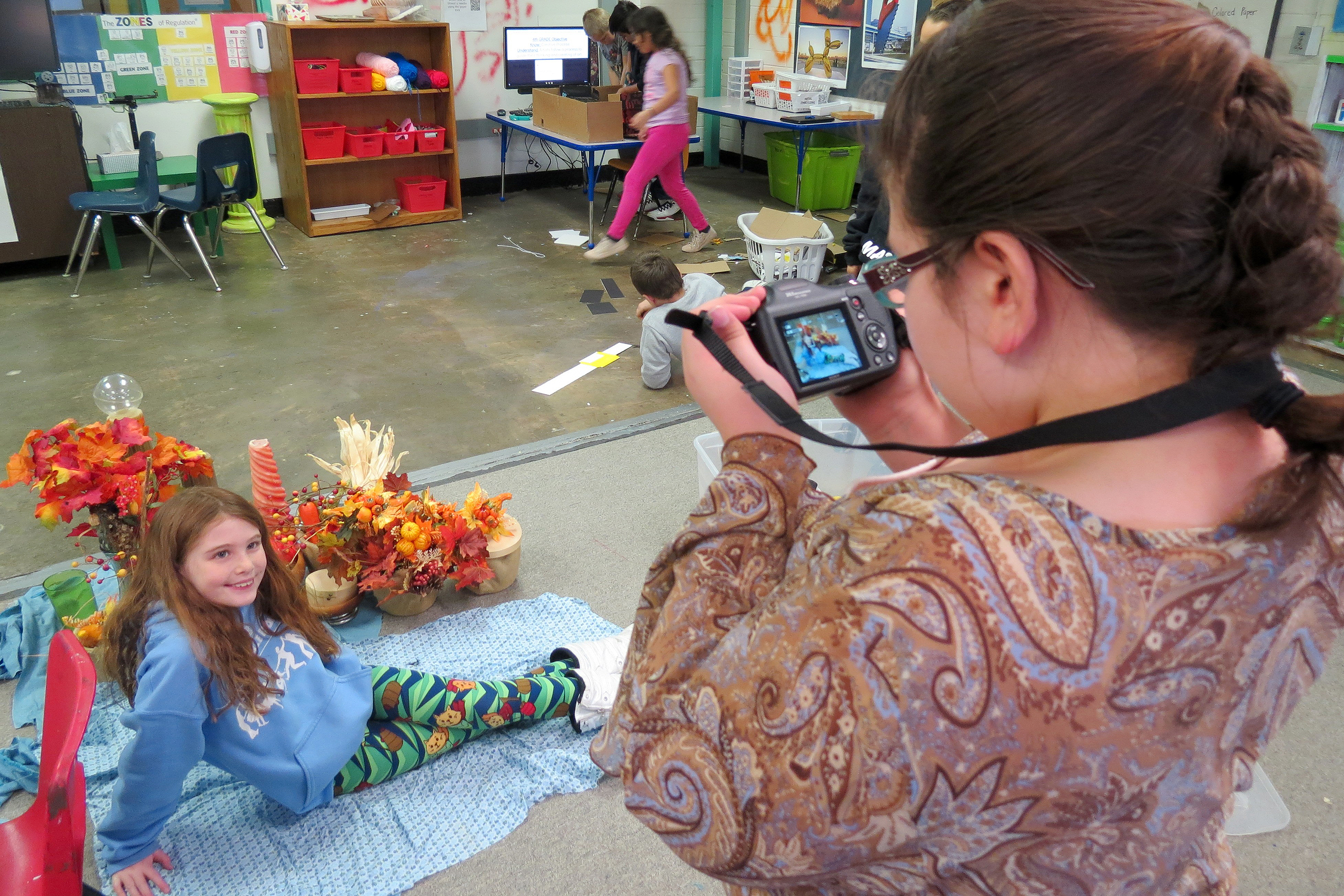 Ruby encourages her students to notice the finer details in the world around them and in the art they’ll share, beginning with a short discussion about what they want to communicate to their viewers and how they will convey it through art.

“Maybe you think about what colors you want to use because colors bring different moods,” she said. “Maybe you want to bring awareness to a topic.”

She showed them a short video of an art installation by French artist Paulo Grangeon as an example. He crafted 1,600 papier-mâché​ pandas to bring awareness to the world’s remaining wild pandas.

The students then discussed how Grangeon positioned the pandas in different installations and whether art is permanent or temporary. Each student read over their individual feedback from Ruby, on their own ideas.

Edgar Rivera wanted to create a plane. Ruby shared a video on one approach he could take.

It’s “not really the type of planes I’m going for but still it’s cool,” Rivera said.

The video got him thinking: It seems too complicated for him to do but he got to work on his own version. Feedback for another student interested in warplanes includes some paintings by Pablo Picasso. Ruby asks the student to think about the question: How do artists record or convey ideas about war?

At the end of class, after the kids clean up, they have reflection time. One artist answered questions from his classmates on how he made the piece, why he chose the material they did and what they like about it.

Many in Ruby’s classroom say art is one of their favorite classes since it lets them follow their passions and reflect. Jacob Isler said he feels calmer when he leaves the art class.

“I get to express my feelings – sad, mad – in the way that just lets them go,” he said. “It’s really fun to just draw and get to do stuff in our own way.”

Instead of kids throwing their art in the garbage, her students now bring all kinds of materials from home, full of ideas of what they want to create.

Her advice to other teachers: Start relinquishing some control and you’ll be surprised.