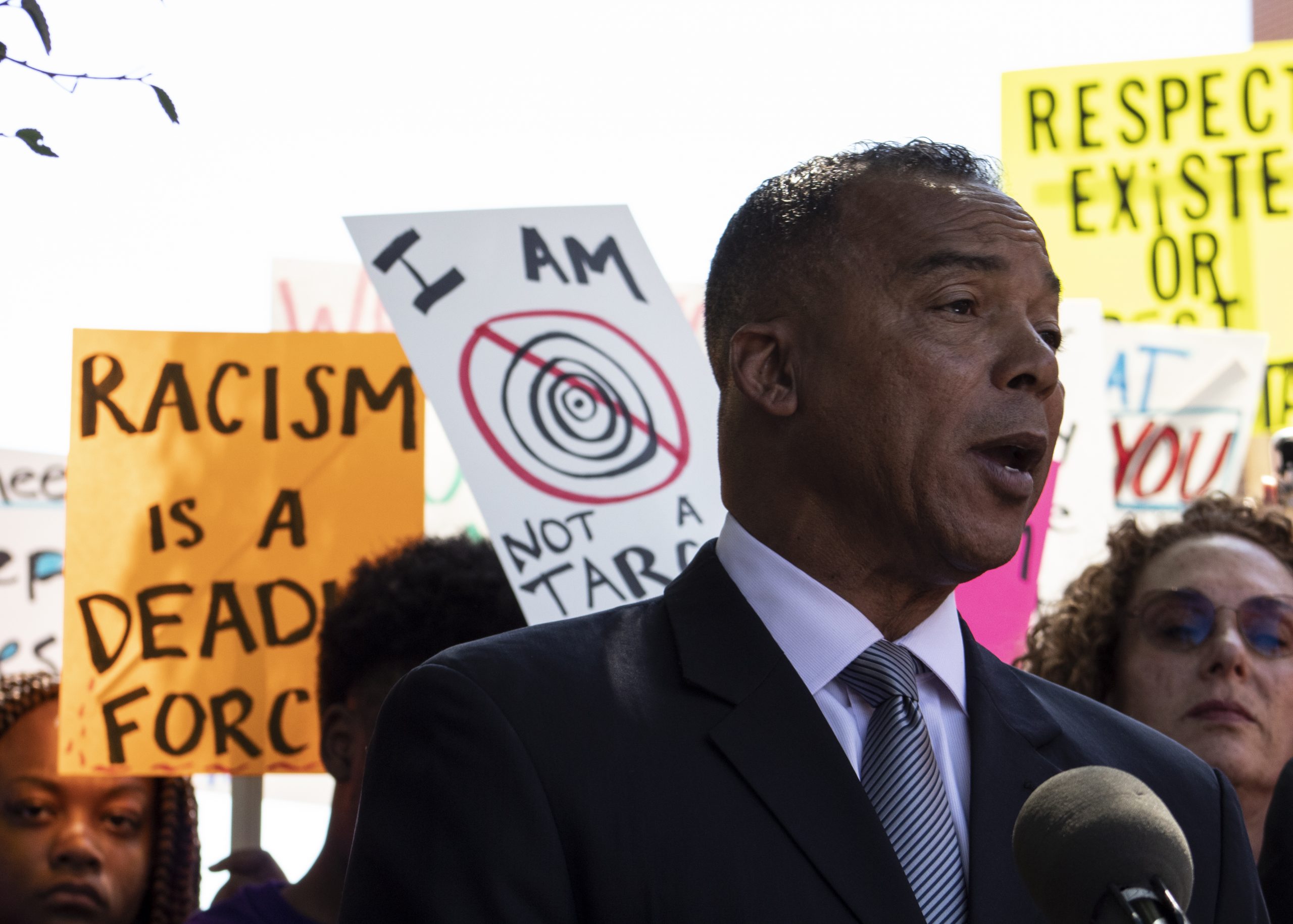 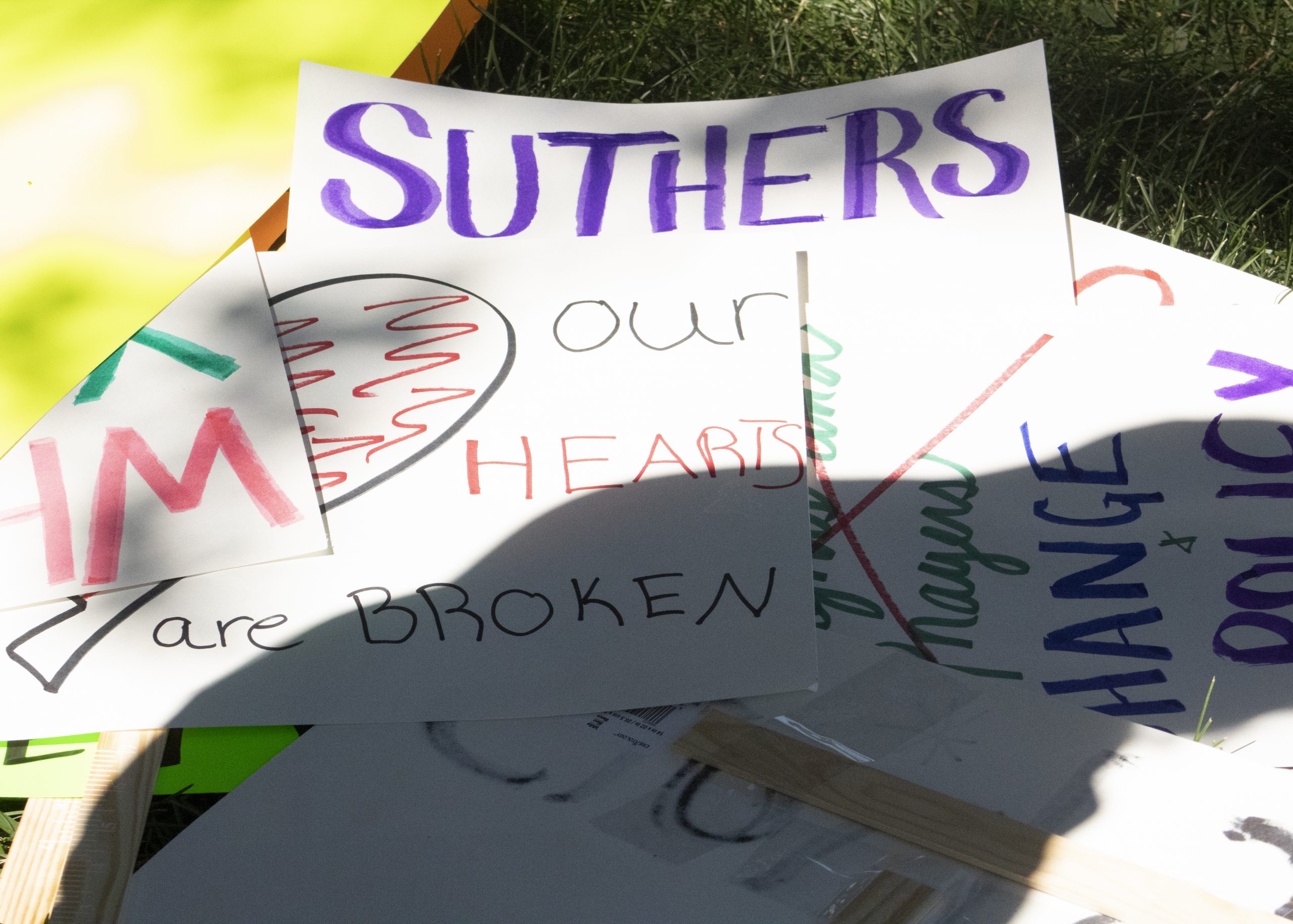 Abigail Beckman / 91.5 KRCC Signs at the press conference showed solidarity with the Bailey family and called out a lack of confidence in Mayor John Suthers. 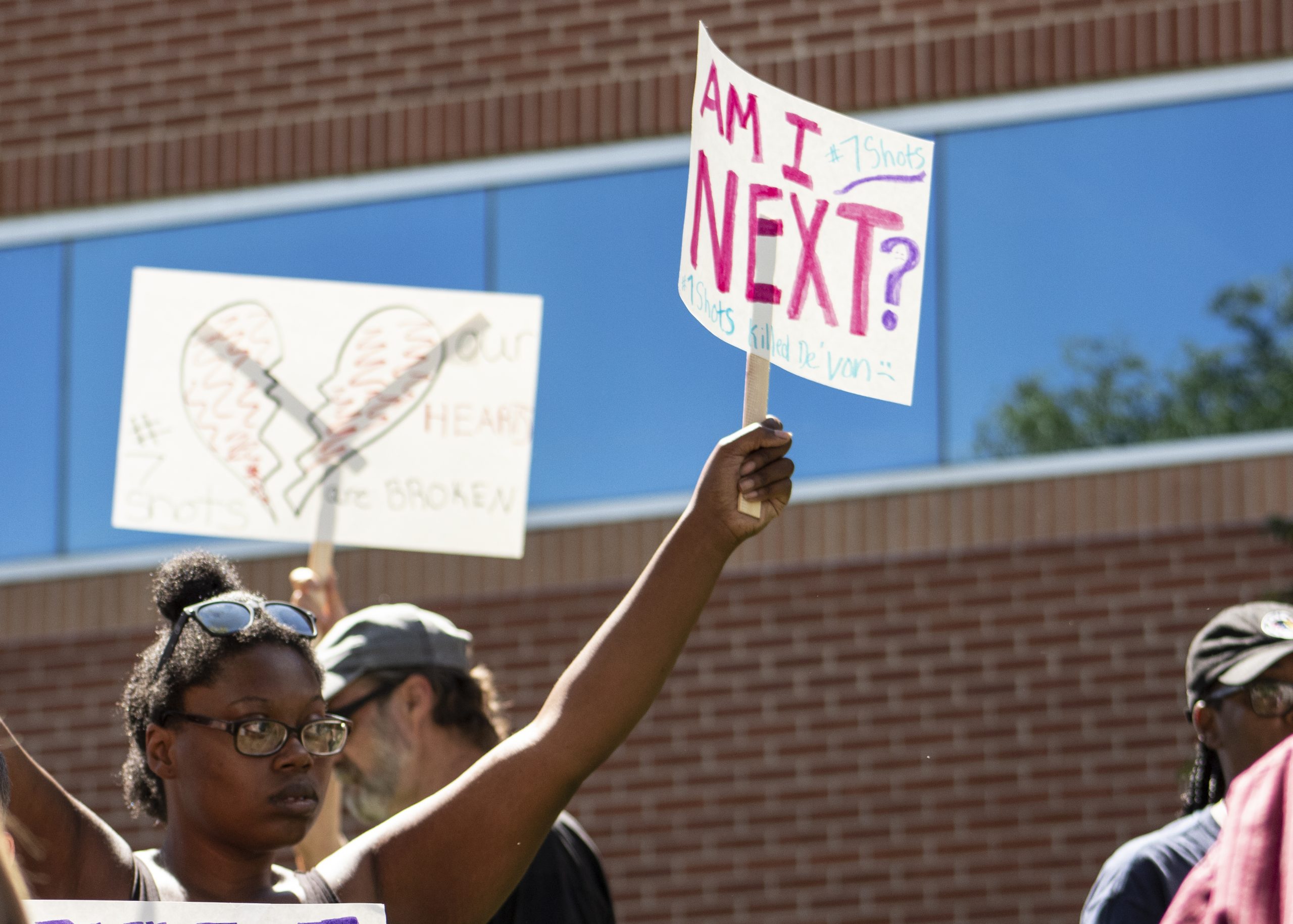 Abigail Beckman / 91.5 KRCC A young woman raises a sign that reads "Am I Next?"

The family of De'Von Bailey is calling for an independent investigation into his death. The 19-year-old was a suspect in a robbery when he was shot and killed by the Colorado Springs Police Department on August 3.

At a press conference downtown Tuesday in front of the CSPD Operations Center, Bailey's family called for transparency and justice. Reverend Promise Lee spoke on behalf of the family saying they don't trust Mayor John Suthers or the Colorado Springs Police Department.

"We do not trust the process of investigation in this case," said Lee. "Regardless of how you try to sweep this under the rug you will not be successful."

He said the family didn't come to the press conference to bow their heads and pray, "especially with our backs to the police department," referencing allegations that Bailey was shot in the back as he ran from the police.

Instead, Lee said, they came with a list of demands.

Those demands include that the state attorney general take over the investigation, which Bailey's family says will eliminate any possible conflicts of interest in the current case being conducted by the El Paso County Sheriff's office.

"History will remind us - and if we were wise, we would listen - friends cannot be trusted to investigate friends," said Colorado Springs-based pastor Terry Thomas.

Under state law, a separate agency must investigate officer-involved shootings, so the current situation is considered normal protocol. The El Paso County Sheriff's Office has not yet responded to a request for comment, but a spokesperson with the office told the Gazette that the investigative team is sworn to act fairly and professionally.

Thomas said the family has been patient, but the time has come for someone else to be brought in to investigate.

"We all know how this movie ends," he said. "But it could be that we all [have been] raised for a time such as this to say, 'No, not on our watch. Not on our city. And it must stop now.'"

Bailey's father Greg remained calm despite being interrupted by a number of people unaffiliated with the press conference heckling the gathering. He said "all lives matter" and that the family is only looking for justice.

"I never even thought I would be here right now," she said. "...This matters for everybody who has a child in their life. [You] never think it could happen to you, because I thought that. We have to fight for justice so no one else has to feel this pain of not seeing their child anymore."

Amanda Southerland and her son Jace attended the press conference to show solidarity with the family. Southerland expressed her frustration with the shooting.

"As a mom of a child of color, it could've been my son. We raise them the best that we can, but we can't control the choices they make as adults," she said, speaking of the desire to protect her child.

9-year-old Jace held a sign that read "Don’t Shoot Our Kids." He earnestly questioned the rationale of Bailey's death.

"They shouldn’t have shot him seven times," Jace said quietly.

Bailey family attorney Darold Killmer said it has yet to be determined how many times Bailey was shot, as the autopsy report has not been released. The hashtag #7shots has been repeatedly referenced by demonstrators in regard to Bailey's death.

Many in attendance repeatedly demanded for more information, including the immediate release of all police video from the shooting. Killmer said the city has promised they will get it, possibly by the end of the week. The Sheriff's Office has previously said they expect to turn over their findings to the District Attorney by Friday, after which the city has said it expects to release body camera footage.

"The legacy of De'Von Bailey will be when we turn the corner," he said. "We're going to hold the police accountable."