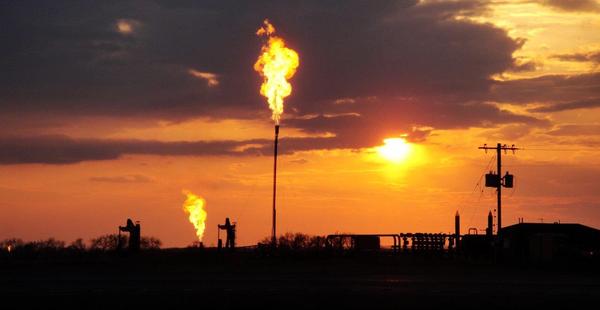 Over the last few years, oil production has spiked in the U.S., with help from states such as Wyoming and Colorado. And the boom brought a nearly 50 percent increase in natural gas flaring between 2017 and 2018, according to the Global Gas Flaring Reduction Partnership, which is managed by the World Bank.

The increases are concentrated in the Bakken and Permian oil fields in North Dakota and Texas, respectively. Both states dwarf Wyoming, which ranks third nationally in the amount of natural gas flared.

Flaring is the act of burning off excess natural gas when it can't economically be stored and sent elsewhere.

The Trump Administration has taken steps to roll back the primary federal regulations around flaring. Wyoming and Colorado have some state rules, but Jon Goldstein, with the Environmental Defense Fund, would like to see more.

"Oil and gas companies will continue to invest resources on getting oil to market until they're forced to get that gas to market and not just flare it, burn it off. It'll take regulation to incentivize that," Goldstein said.

Phil Flynn, an analyst with the PRICE Futures Group, a consulting firm, believes the flaring increase is a short-term problem.

"We're going to look back at the flaring in retrospect as growing pains in an industry that's revolutionizing the world," Flynn said.

In addition to rolling back rules around flaring natural gas, the Trump Administration's also working to relax the regulation of methane, which is essentially unburned natural gas that can escape during production and distribution. Methane has 80 times the heat-trapping potency of carbon dioxide over 20 years.

Have a question about this story? Contact the reporter, Cooper McKim, at cmckim5@uwyo.edu.

This story was produced by the Mountain West News Bureau, a collaboration between Wyoming Public Media, Boise State Public Radio in Idaho, KUER in Salt Lake City, KUNR in Reno, and KRCC and KUNC in Colorado.