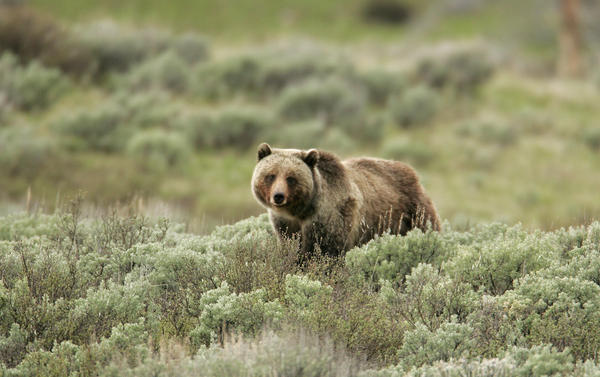 It's known as the Night of the Grizzlies. Over fifty years ago, two women were killed by two different grizzly bears on the same night. The repercussions of the incident can still be seen in the way bears are managed today. But it also gave birth to a powerful myth—it's dangerous for women to spend time in the woods while menstruating.

Back in the early 1980s, Caroline Byrd worked on a seasonal trail crew with the U.S. Forest Service. Most summers she worked just outside of Yellowstone National Park. And for a few of those seasons, the crew was made up entirely of women.

"When people would run across us on the trail, they were always like, 'Wait, you're girls!' and 'We'd be like, yeah, uh huh, we are!'" Byrd said.

It was a really powerful experience for Byrd; one that meant a lot of hard work.

"Here we were out in the wilderness for 10 days at a time," described Byrd. "Doing really hard manual labor that's super satisfying…clearing trails, using a cross-cut saw, and a double bit ax, and a polaski."

In 1983, she stayed on late, doing end-of-summer stuff like cleaning up campgrounds and marking timber to be cut down. And because it was fall, it was hunting season.

"And that's when we ran across this hunter's camp," said Byrd. The hunter had left groceries inside a wall tent, and had returned to town. While he was away, a mama bear and her cub had ransacked the camp. Bear encounters were rare at the time since the number of bears in Yellowstone's ecosystem was low. That's why a special agent came all the way from Colorado to investigate.

"He was aghast that women were working in the back country where there were bears," said Byrd. "And we were like 'no, that's not the issue!' The issue is this hunter left his food, and bears got into it."

That's when the U.S. Forest Service told Byrd and the three other women on her crew that they would no longer be able to work in bear country while they were on their periods.

"Why are we getting restricted like this when this has nothing to do with the fact that there are women on a timber crew working in bear country?" Byrd said. The women were outraged. So they wrote to the Equal Employment Opportunity Office in Denver, and the policy was rescinded. But where exactly did the idea that menstruating women are at a greater risk in bear country come from? That goes back to one fateful night in 1967: the Night of the Grizzlies.

He said the attacks caused the National Park Service to rethink how to deal with bears. The idea was to get bears feeding on native foods instead of human food hand-outs and garbage. Gunther said that meant converting garbage cans and dumpsters into bear-resistant designs, installing food storage boxes in roadside campgrounds and hanging poles for backcountry spots, as well as strictly enforcing regulations that prohibited hand-feeding beers, something once regularly seen in the park. But the Night of Grizzlies also sparked speculation.

"Having two fatalities in just one night was just so rare that people were groping for a reason, and one theory that came about was menstruation might have led to these two fatal bear attacks in Glacier," said Gunther.

Only one of the women killed was on her period, though. And yet, the theory stuck. That's why decades later Caroline Byrd and her female colleagues were told they couldn't work in bear country while they were menstruating. And why in 1988 as a graduate student in environmental studies Byrd tried to debunk the myth.

"I ran a whole statistical analysis of is there anything out there that shows that bears react differently to women than to men? And it came out really strong that no, bears do not respond, or react, or in any way change their behavior based on the gender of the person they're encountering," Byrd said.

This lack of definitive evidence remains true today. But so does the myth. And it's possible Yellowstone's website may not be helping. A page that's dedicated to menstruating women in bear country cites Byrd's statistical analysis. It even breaks down the stats for bear-inflicted human injuries in the park.

For instance, between 1979 and 2018, 50 people were injured by bears within Yellowstone, 39 of those were men, while 11 were women. And out of those 11, none of the women were on their periods. As such, the website indicates, "the bear-inflicted human injury data from YNP does not indicate any correlation between bear attacks and menstruation."

But the website also says women can take precautions if they're concerned, like using tampons instead of pads.

"I do feel like the way it's worded on the website is problematic," said Margaret Seelie, a reporter that has written about the bears and periods myth.

Another study included on the website is from the late 70s. It tested how polar bears would react to menstrual blood in different scenarios, including how a caged polar bear reacted to a used tampon versus other odors. But both Byrd and Seelie said the research methods were flawed. Seelie also said including the study on the website perpetuates the misconception.

"It's continuing to support and promote the myth that polar bears or bears are attracted or affected by menstruating women, which is different from a blood soaked tampon."

Seelie is an avid hiker. Before her own reporting, she was pretty sure that being out in bear country while menstruating was dangerous.

"It's also part of the menstruation taboo that is in our culture, and this weird fear of menstruation and of menstruating women," she said. But Seelie explained fears like this keep women out of the woods, and that becomes an issue of quality of life.

Caroline Byrd agreed, that you shouldn't have to stay home if you're on your period.

Have a question about this story? Contact the reporter, Maggie Mullen, at mmullen5@uwyo.edu.