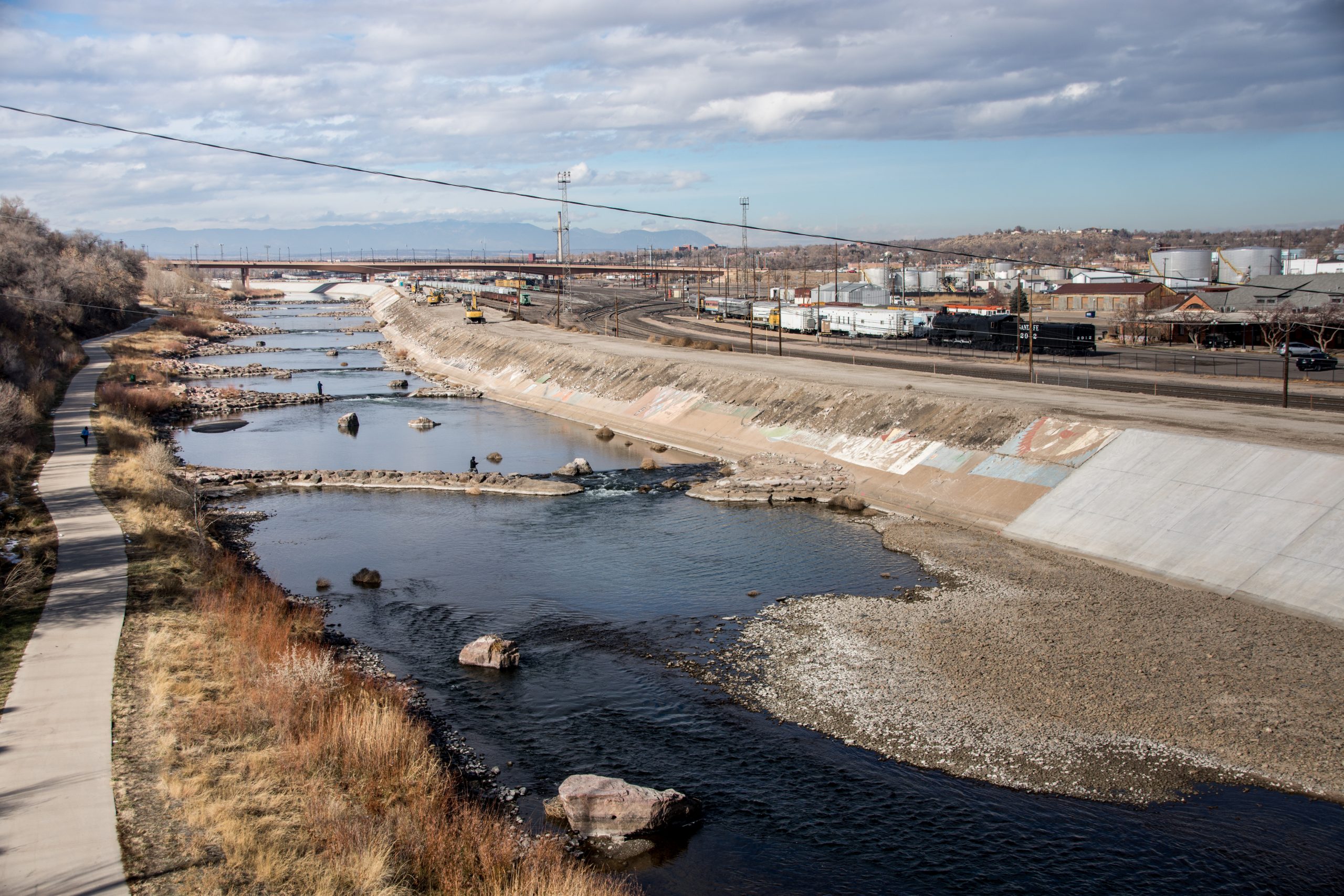 Shanna Lewis / KRCC The last section of the Arkansas River levee in Pueblo will be resurfaced this winter. Here, the old surface containing the mural is being taken down, while the new surface is clean. Planning for new art is underway. 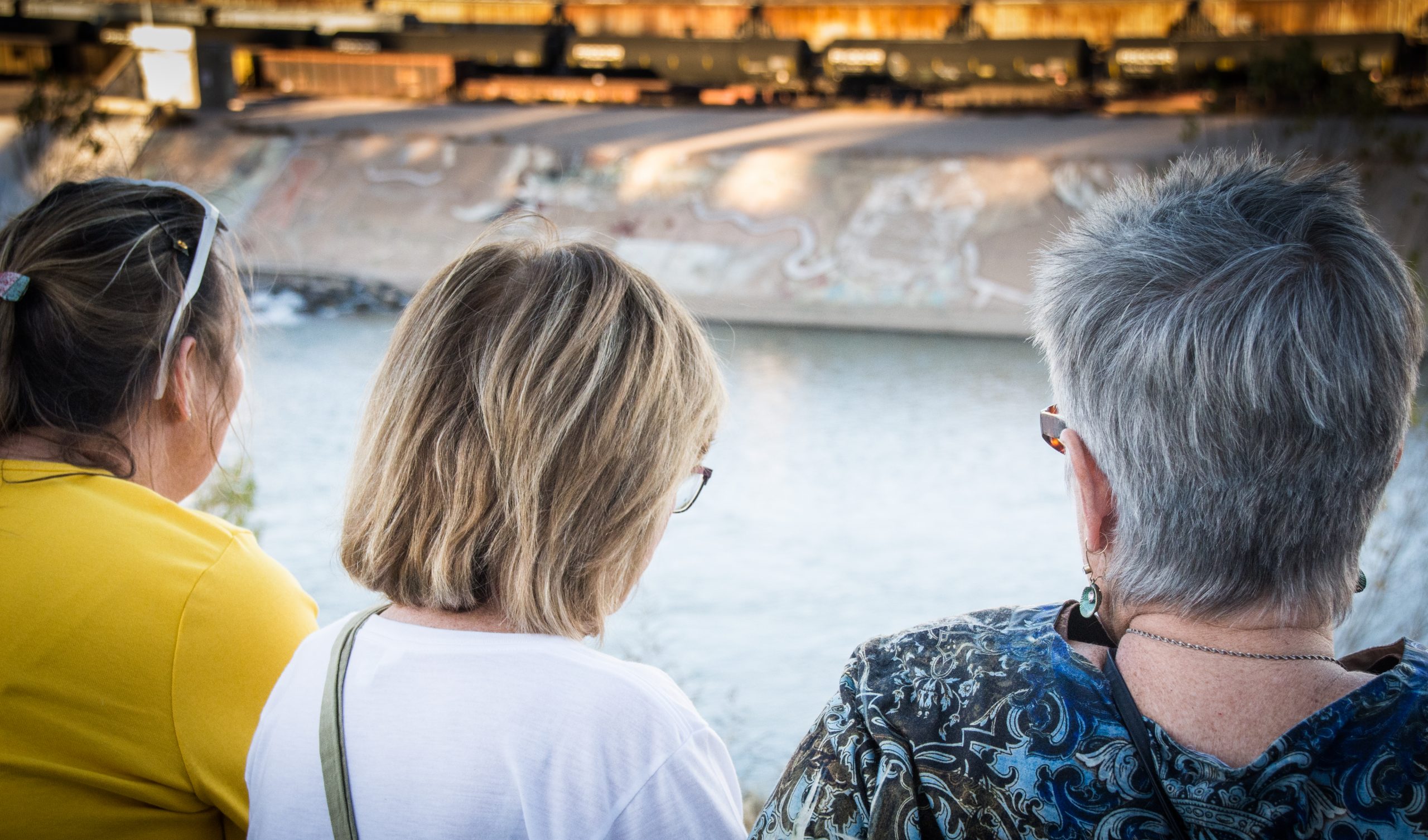 Huge paintings once lined most of the 2.8-mile long levee that helps protect downtown Pueblo from flooding along the Arkansas River. But they're being destroyed during repair work that started on the levee five years ago.

Artists began painting on the levee in the 1970s. Back then it was considered vandalism, and the first mural went up in the dark.

Eventually the Pueblo Conservancy District, which oversees the levee, decided not to fight the muralists and asked Cynthia Ramu to help coordinate the artwork that ultimately claimed the Guinness record for the world's largest outdoor mural.

Now, artists are gearing up to paint new murals on the levee's blank canvas.

Ramu, an artist and teacher in Pueblo, is part of an advisory committee that helped create guidelines for new murals. The guidelines cover quality, maintenance and safety, as well as suggesting broad Pueblo related themes.

"It's different now," says Ramu, who also worked on some of the original murals. "It's more formal. It's kind of more sterile."

As part of the new process, there's also a partially refundable $100 application fee. More than a dozen artists have already submitted proposals to paint on the levee and the district has approved eight, ranging from nature scenes to geometric designs.

Others will seek to paint during the warmer weather next spring, like Pueblo artist Joan Smadley.

"Well, I'm going to be 70 next year," said Smadley. "And I'm going do it. Even if I have to superglue myself to the side of that levee."

Puebloan Lorenzo Estrada was among the last people who painted on the old mural in 2014. At that time, he says he knew the levee and artwork would be destroyed, and he didn't know how dedicated he was. He says it's different for him this time around.

"I know now that this new part is here, it's just going to be 100 percent heart," he says.

Estrada may do the first paintings on the new concrete. Along with planning his own design, he's been contracted to paint local school logos on the levee near the community's Dutch Clark stadium.

Yet while work is ramping up for some artists, the district turned down a few applications because it said they were incomplete or didn't fit the guidelines. At least one local artist has called that censorship.

Ramu says there are people who are unhappy about the district's oversight. "A lot of people don't want to conform," she says.

She says she hopes those who were turned down will revisit the proposal with the advisory committee and the district. Ramu says she understands the frustration that artists have with the district's control of the artwork, but also sees why management is necessary.

"They are the gatekeepers of making sure that's a safe place," says Ramu. "And that it's not defaced. And I'm not saying right or wrong, but at the same time, it can't be a free for all."

She also thinks the first new murals will set the tone for future paintings.

"I can feel this aura out there," Ramu says. "There's all these lightning bugs, you know, around Pueblo of people that are thinking about these ideas. This whole town is watching that wall over the next couple months to see what's going to happen."

Ramu also thinks that Pueblo can win back the Guinness record. It'll be a while though, because it'll take of hundreds of individual murals joined together to form one long artwork along the banks of the Arkansas River.

Edotir's Note: We originally misspelled Lauren Lehmann's name in the caption in the photo slideshow at the top of this page. It has been corrected.