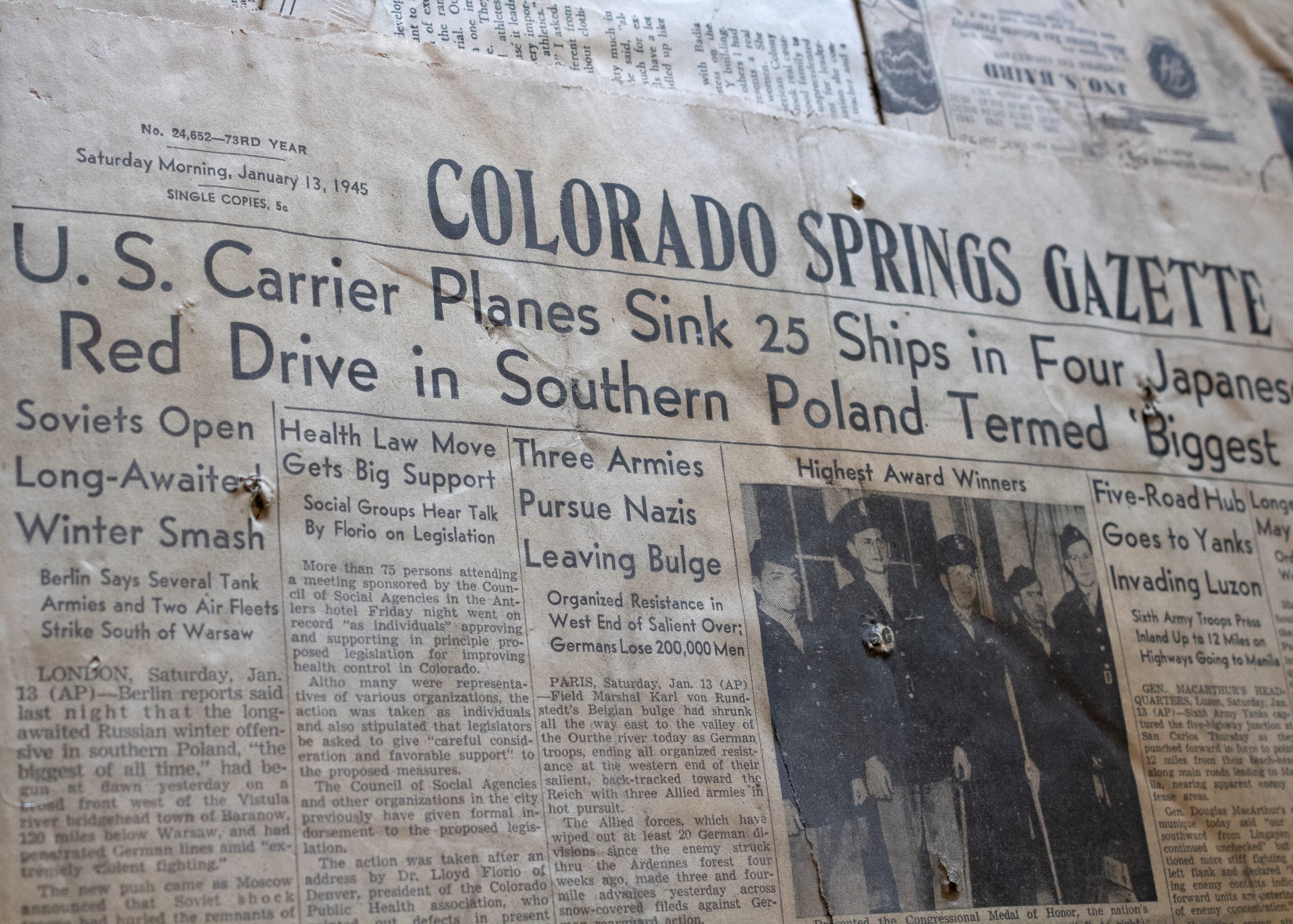 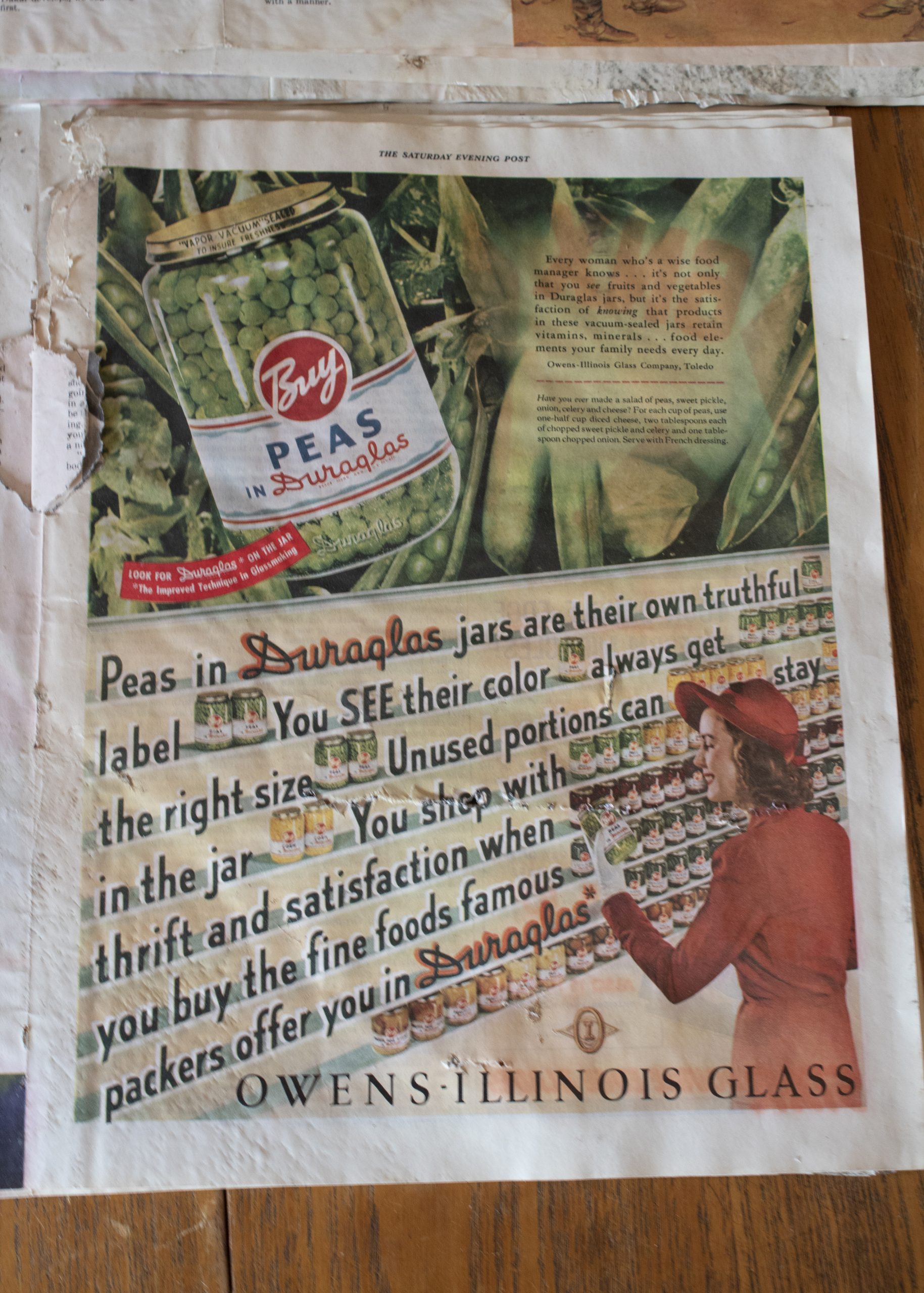 Abigail Beckman / 91.5 KRCC An ad for peas, still bright with color, despite being under the floor of a Colorado Springs home for nearly seven decades. 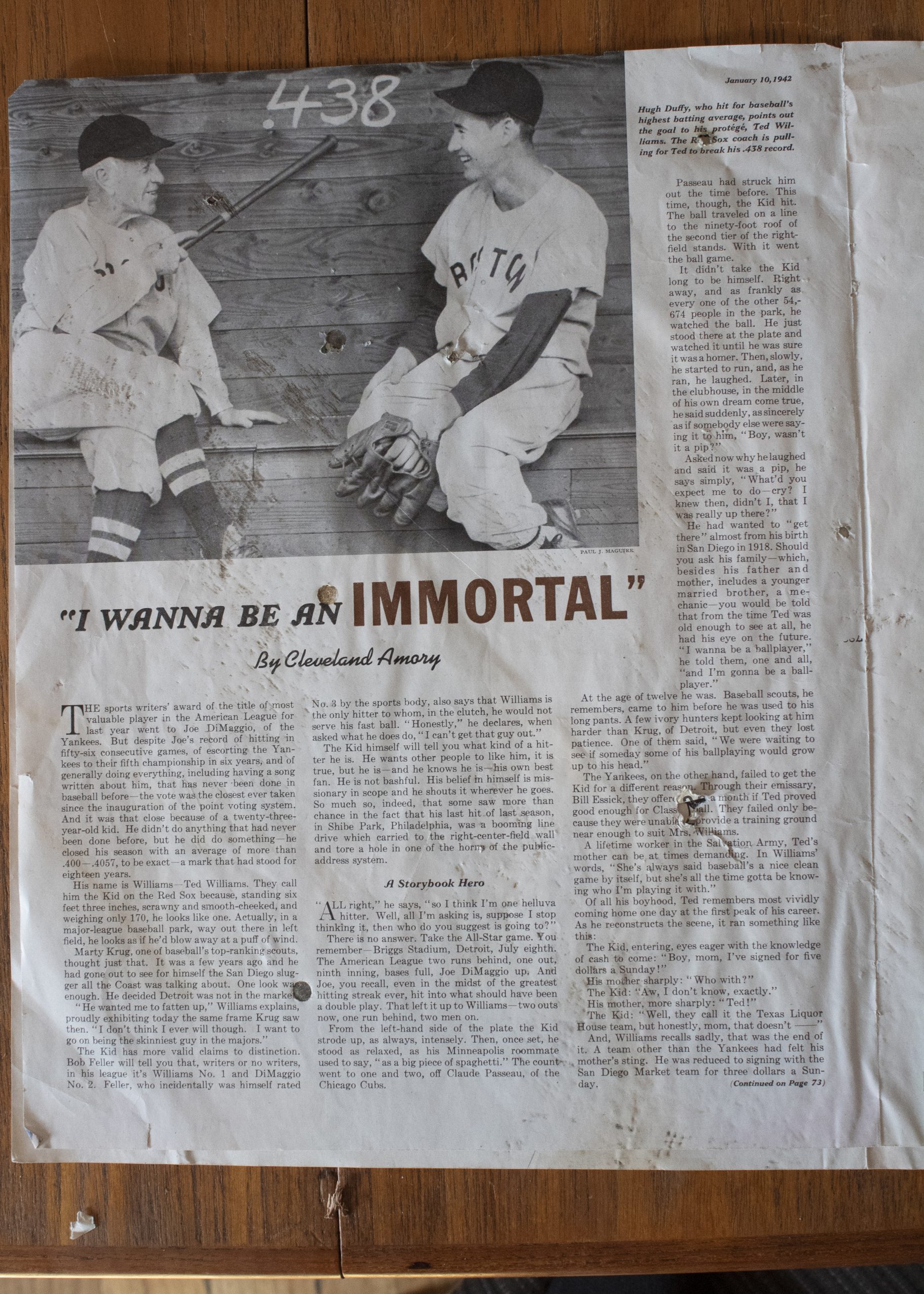 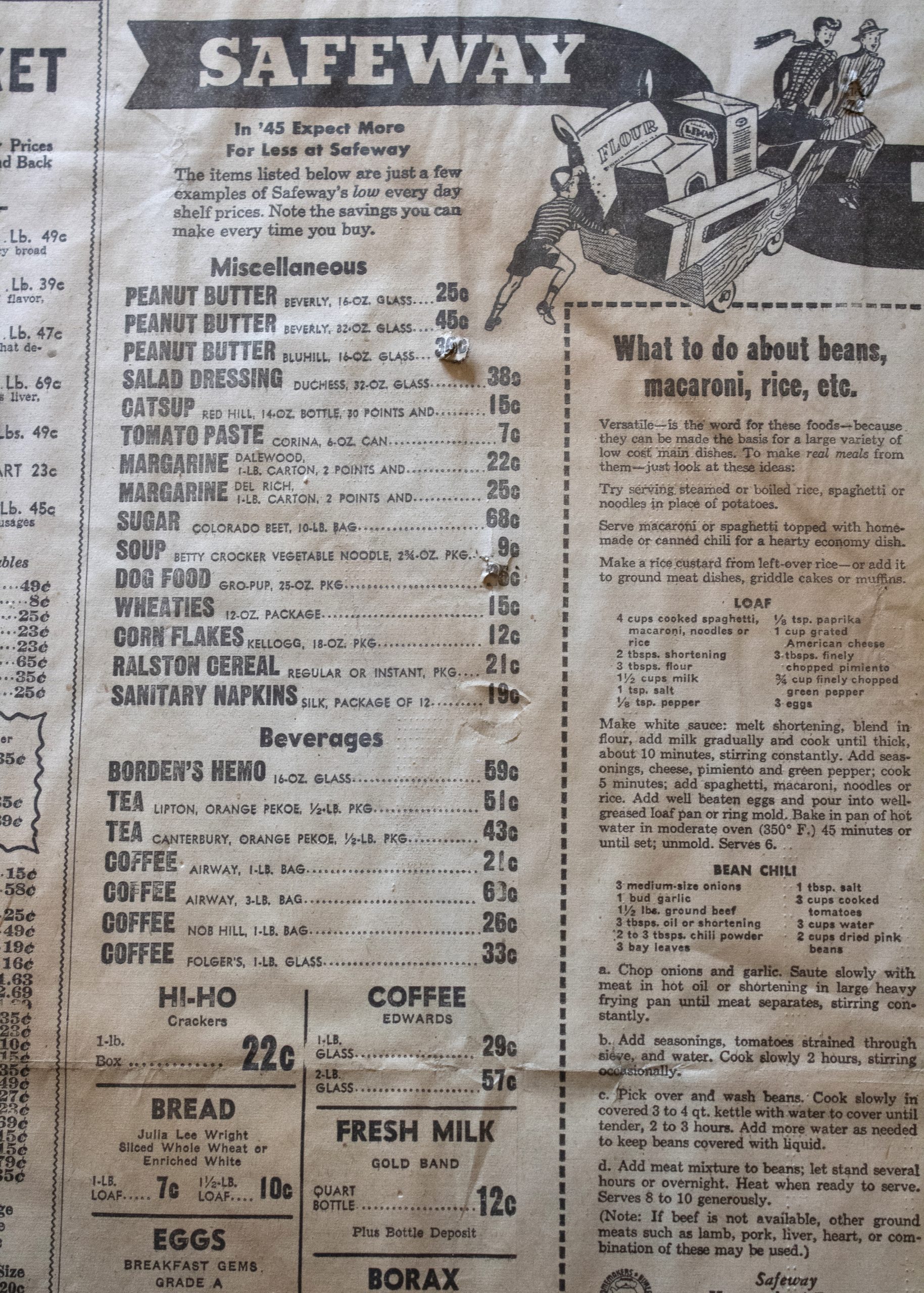 Abigail Beckman / 91.5 KRCC An adverstisement lists the prices for items at a local Safeway grocery store. 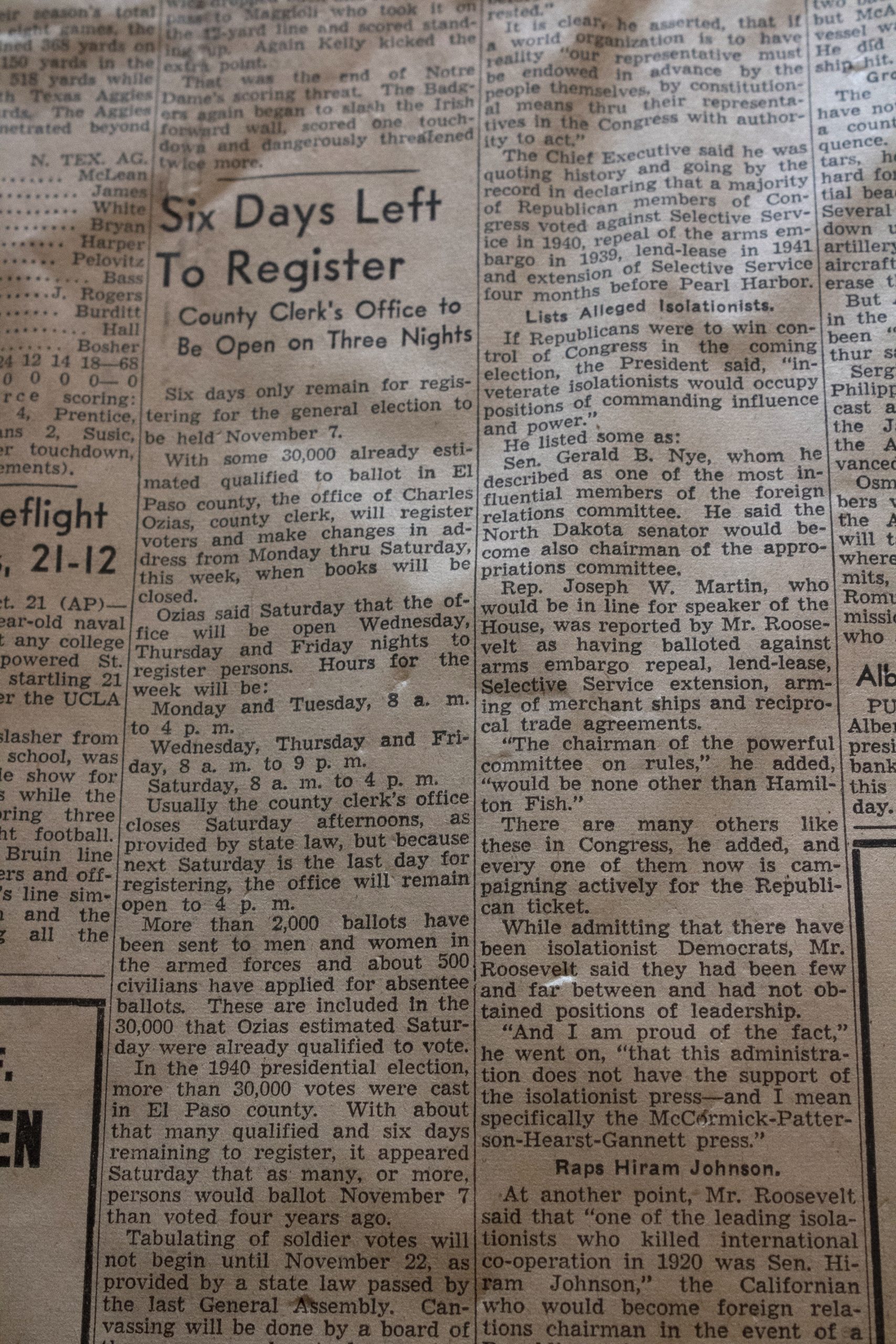 Abigail Beckman / 91.5 KRCC An article from the Colorado Springs Gazette reminds residents to remember to vote. 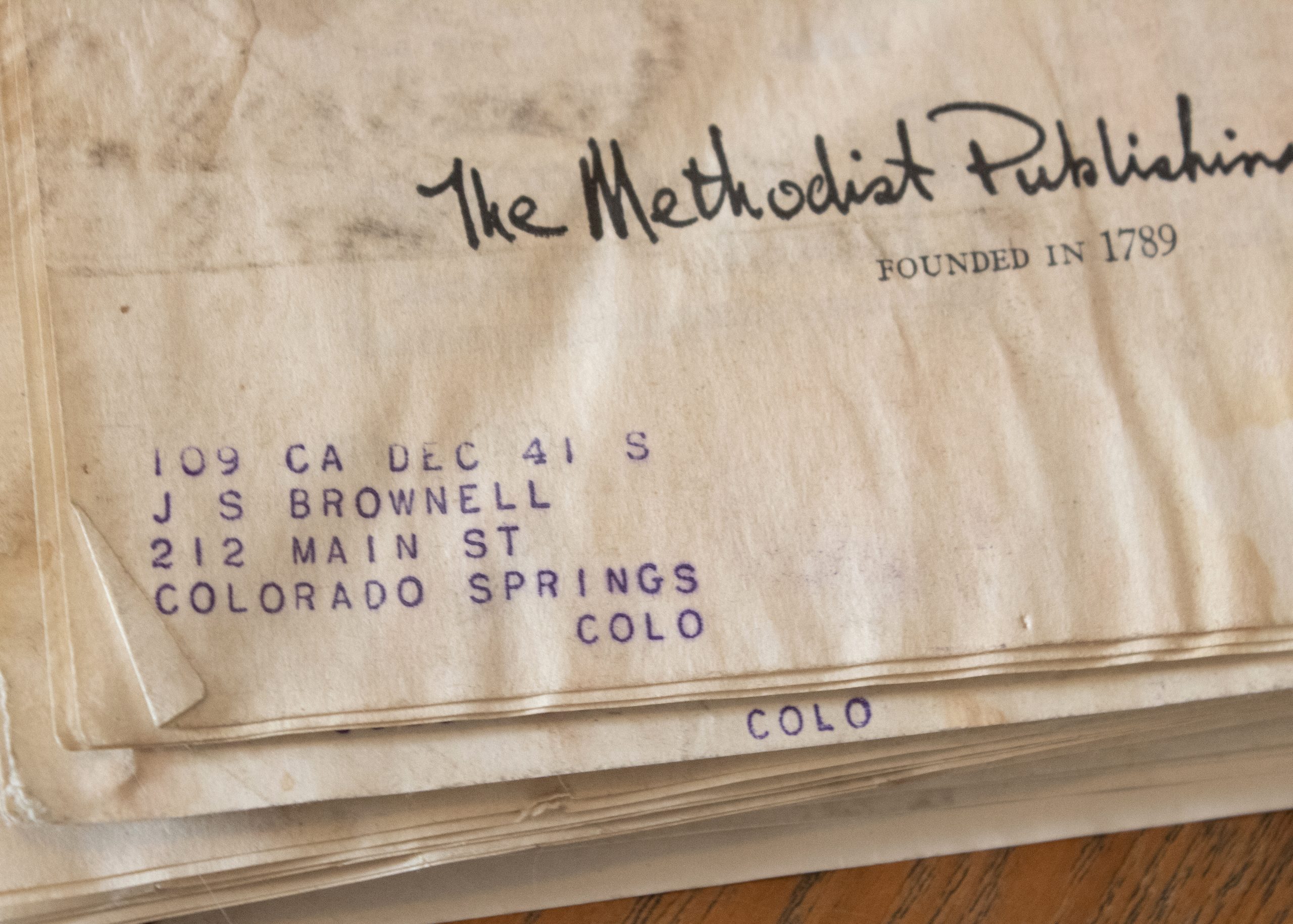 Abigail Beckman, 91.5 KRCC The postage stamp Genesis De Leon discovered on a Christian magazine under her floorboards from the early 1940s.

When the pipes burst in her house near Colorado Springs’ Old North End, a local woman was heartbroken at having to tear out the original wood floor. But as Genesis De Leon pried up the floorboards and pushed away the dust, she found something intriguing underneath.

“You just gotta find a way to pull it back so that you don’t tear the pages really bad,” she says as she kneels on the floor, carefully lifting pieces of thin, yellowed paper.

“This is all definitely local,” De Leon says examining the paper.

She brushes away the dust that lingers behind and shimmies the page loose. It’s a newspaper dated March 23, 1945 — the oldest she has found so far.

The paper is an original printing of the Colorado Springs Gazette. Headlines proclaim “Real Collapse in Germany Far Off” and “Three Armies Surge Ahead.” It’s just one of dozens of pages De Leon has found under the floor, most likely put in place to act as insulation.

There’s also near-complete editions of the Saturday Evening Post from the early 1940s, which seem to have held up better than the Gazette. Full color ads for Campbell’s Soup and General Motors scream out bright and vibrant from the pages. Editorial cartoons show soldiers returning home to find their girlfriends have moved on.

An info box about special subscription pricing during the war stands prominently in the middle of story.

De Leon folds over one page to reveal a photo of Adolf Hilter sitting next to a Japanese diplomat and man named Joachim von Ribbentrop—part of Hitler’s inner circle.

Brett Lobello, director of regional history and genealogy for the Pikes Peak Library District, says these papers are a way to see things otherwise buried by history.

He points to the photo of Hitler. Underneath is the headline “Tokyo Calls the Tune.” Below that is the following question: “Is Hitler as worried about the speed of Japanese conquests as Britons and Americans are?”

“That’s the place where...we’d never think about that because we know what happens,” Lobello explains. “But here, you’re sort of seeing that tension between the Germans and the Japanese. I’d love to read this one because we would never see this in a textbook.”

He says these papers say a lot about the original homeowners besides the fact that they did a thorough job laying the papers for insulation.

“Coming from the same house, the first thing that jumps out at me is you have your local news and you have your national news. You can sort of see that people aren’t relying on one venue for their news because everybody wants to be up on times,” he says.

Current homeowner Genesis De Leon also found a postage stamp for a man named Rev. J.S. Brownell — which you may remember is very similar to our former reporter Jake Brownell. That's what prompted De Leon to call KRCC in the first place. But the address doesn’t match De Leon’s.

It’s a mystery that Lobello is confident he can solve, though, using city directories from the 1940s.

“These give you a list of all the different residents in the city and where they live,” he says flipping through the directory from 1945 to find the “B’s.”

Working backwards, Lobello finds property records for the house from the late ‘60s. But then, there’s no record of the address in 1966 or 1967.

So, he looks to see if the numbering system or the name of the street was changed at that time.

“That didn’t happen,” he says.

What did happen, was in 1966 the house lifted up and moved to its current location, less than half a block away. And because of a series of earlier changes in street names, the house — which is now on Beacon Street — was originally on 4th Street. The owner was a Reverend Paul Brown, Pastor at Roswell Community Church which is right across the street.

So, the names don’t exactly line up. Maybe the postage had the Reverend’s last name wrong? We’ll probably never know.

Genesis De Leon says one thing she does know is that what started out as an unplanned flooring project turned into a sudden interest in history.

“I would have never gotten this into it without finding these newspapers, though. It just sparked something where I'm like ‘this is so cool!’” she says. “It makes me want to have every school kid find something like this [to make them] interested in history.”

She plans to buy a few current papers and put them under the new floors in her house for someone else to discover someday.