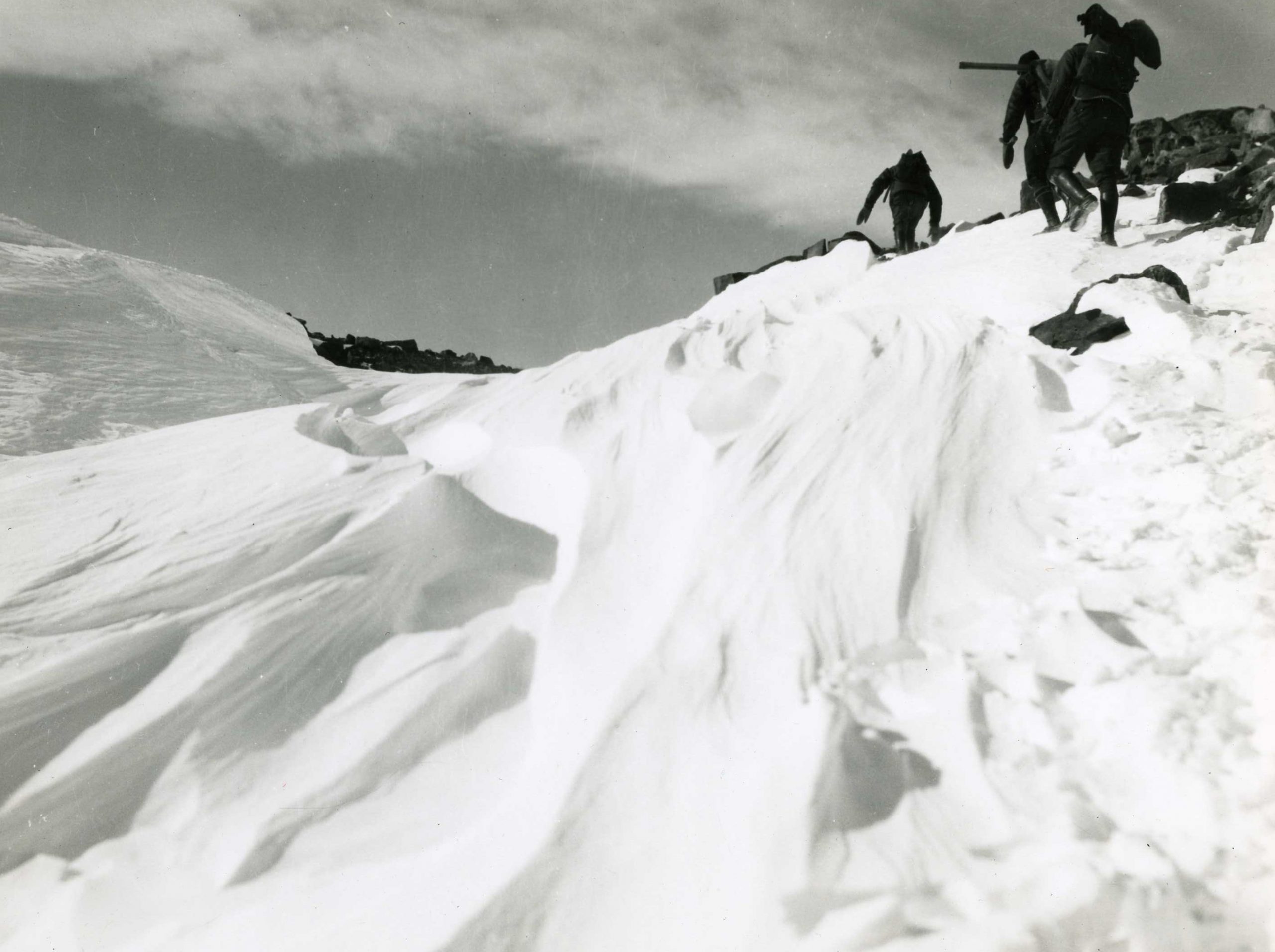 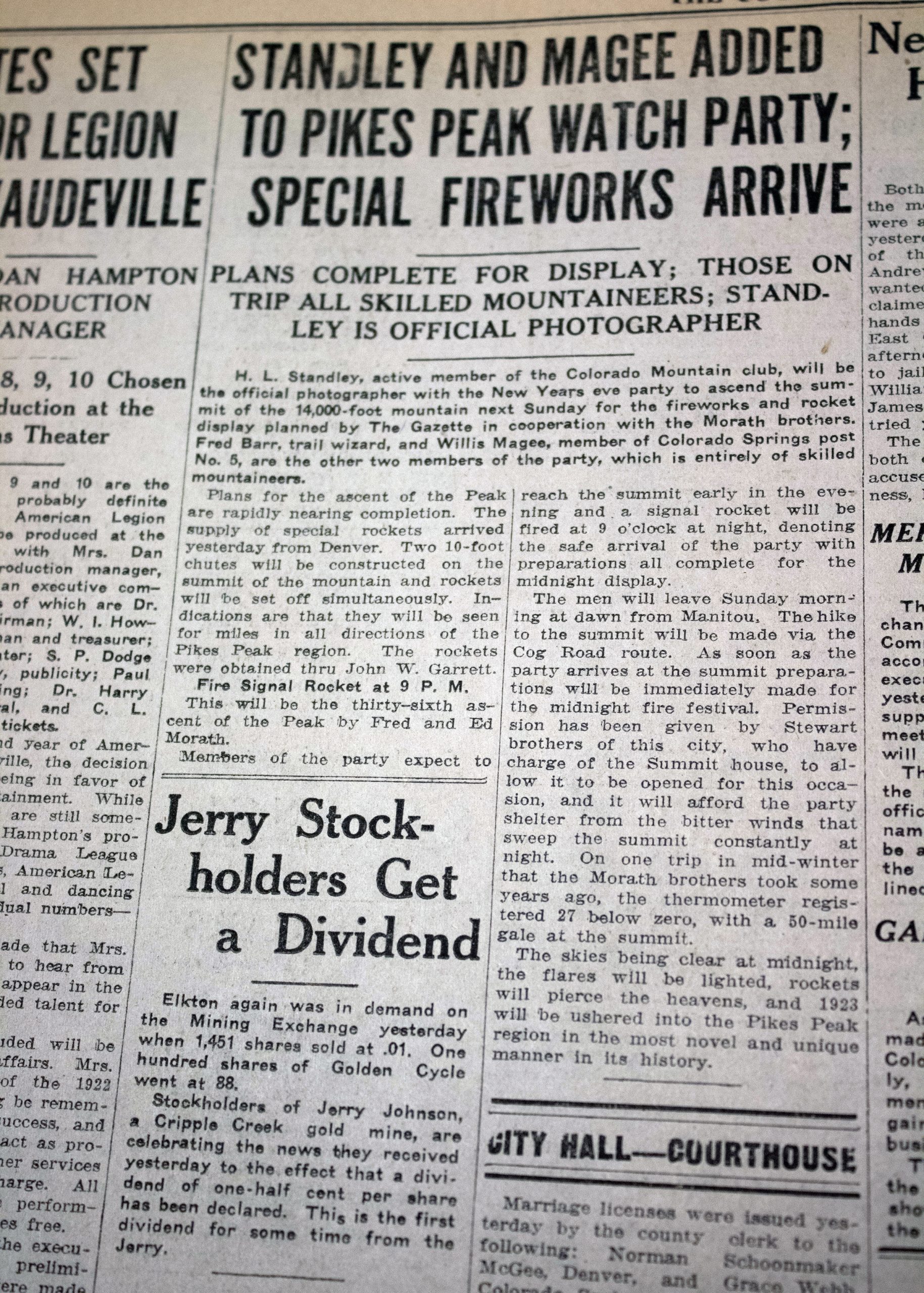 Abigail Beckman / 91.5 KRCC An article from the Colorado Springs Gazette highlighting the plans for the 1922 hike. "The skies being clear at midnight, the flares will be lighted, rockets will pierce the heavens and 1923 will be ushered into the Pikes Peak region..." 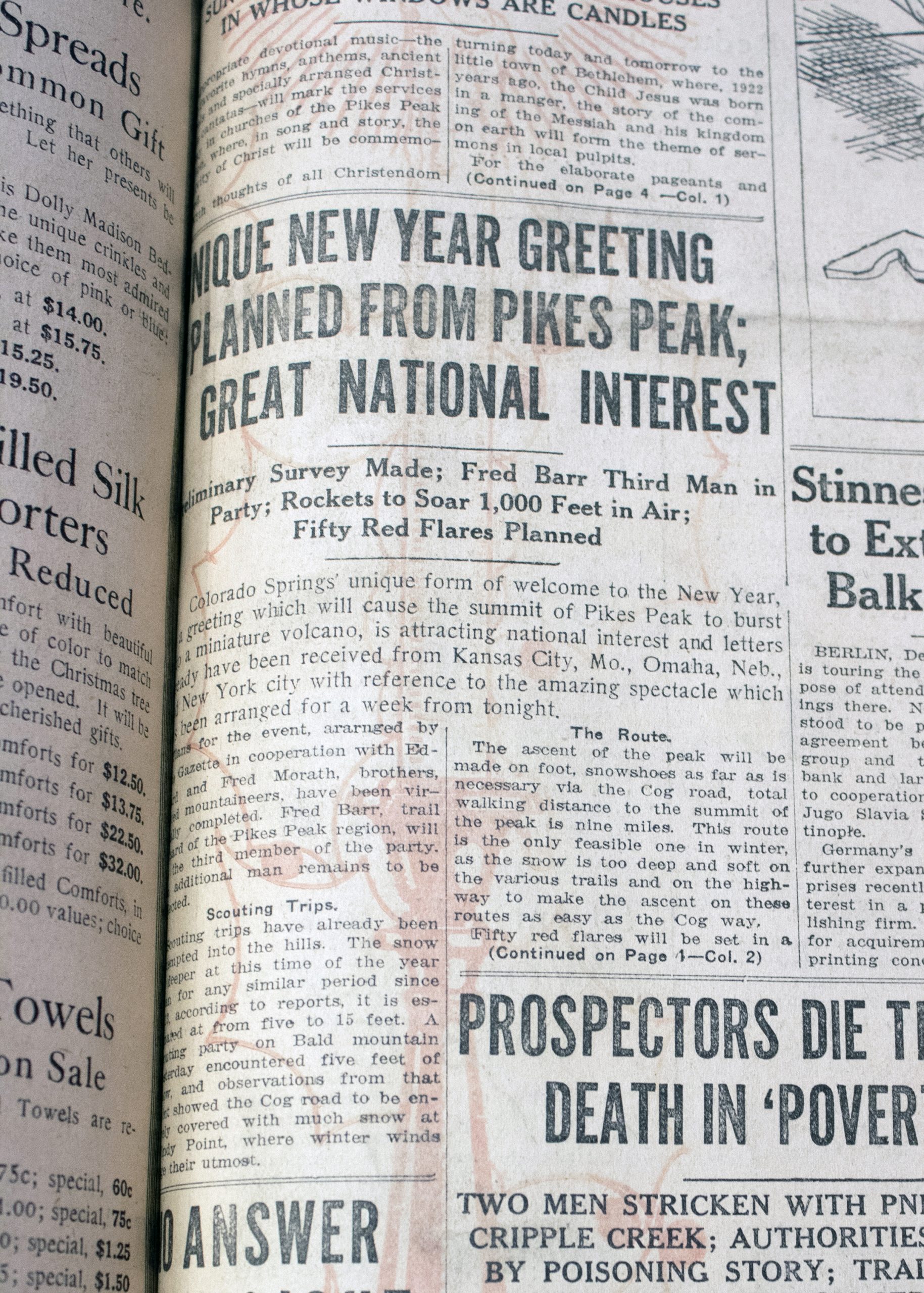 Abigail Beckman / 91.5 KRCC This article from the Colorado Springs Gazette dated Dec. 24, 1922 shows a bit of the planning process for the original AdAmAn trek. 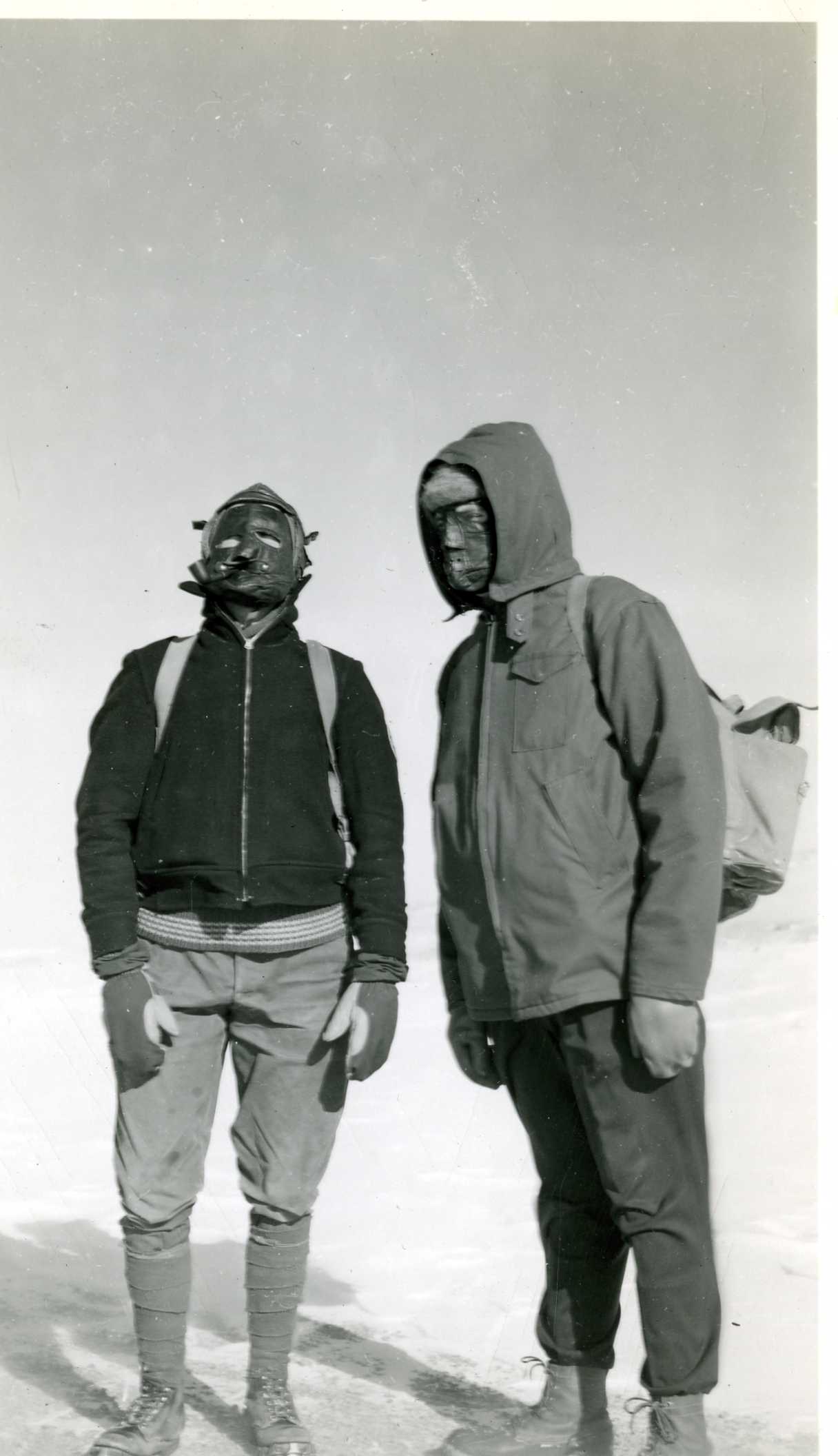 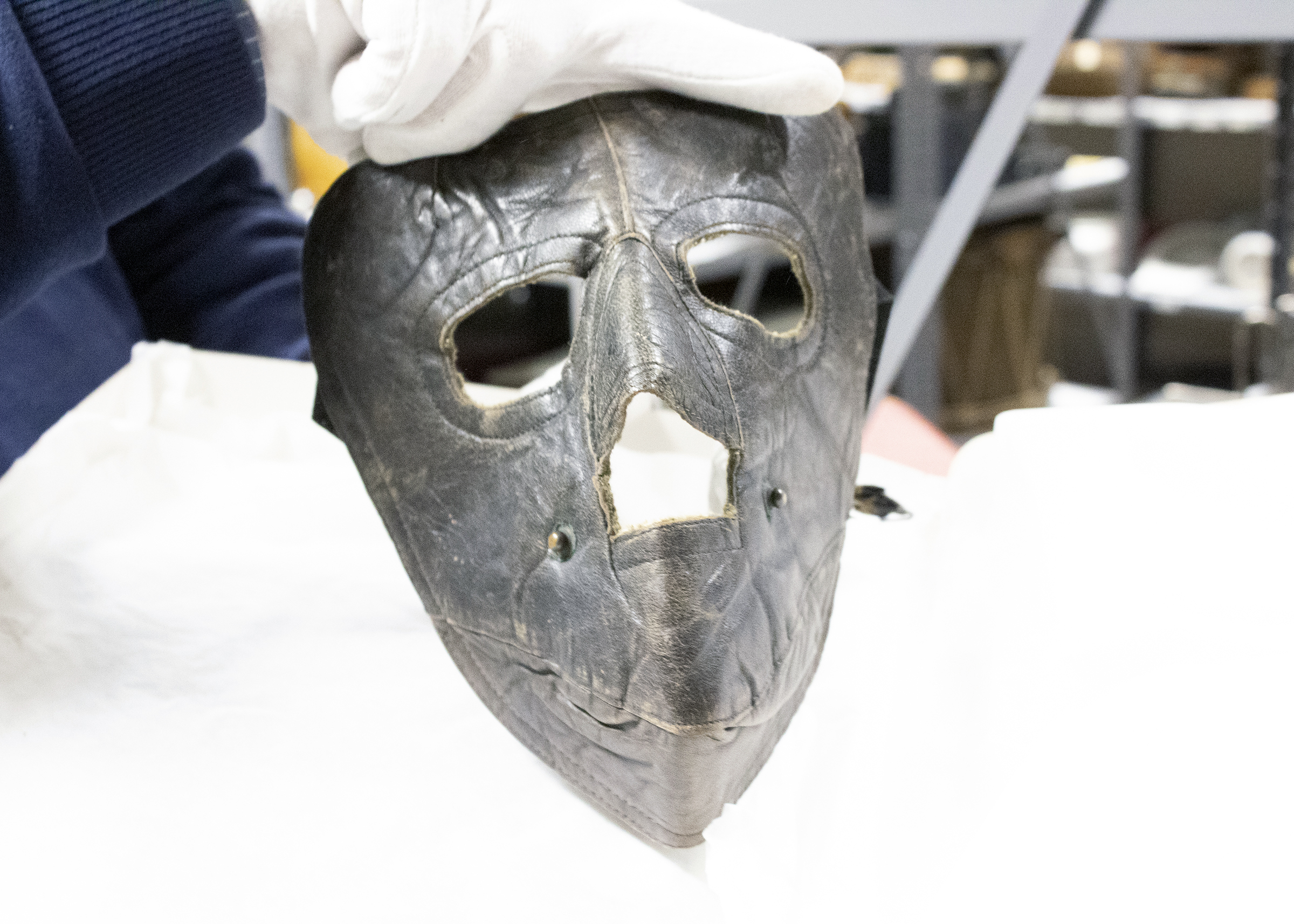 Abigail Beckman / 91.5 KRCC A close up photo of a mask worn by and early AdAmAn Club member to protect his face from the cold. This piece is part of a collection at the Colorado Springs Pioneers Museum. 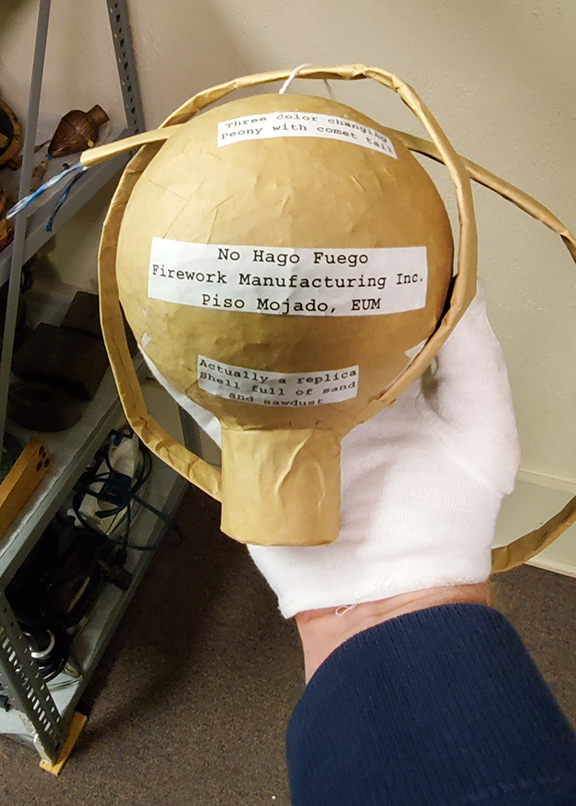 Abigail Beckman / 91.5 KRCC A replica firework that the original AdAmAn Club members carried up the mountain to set off and welcome the year 1923. 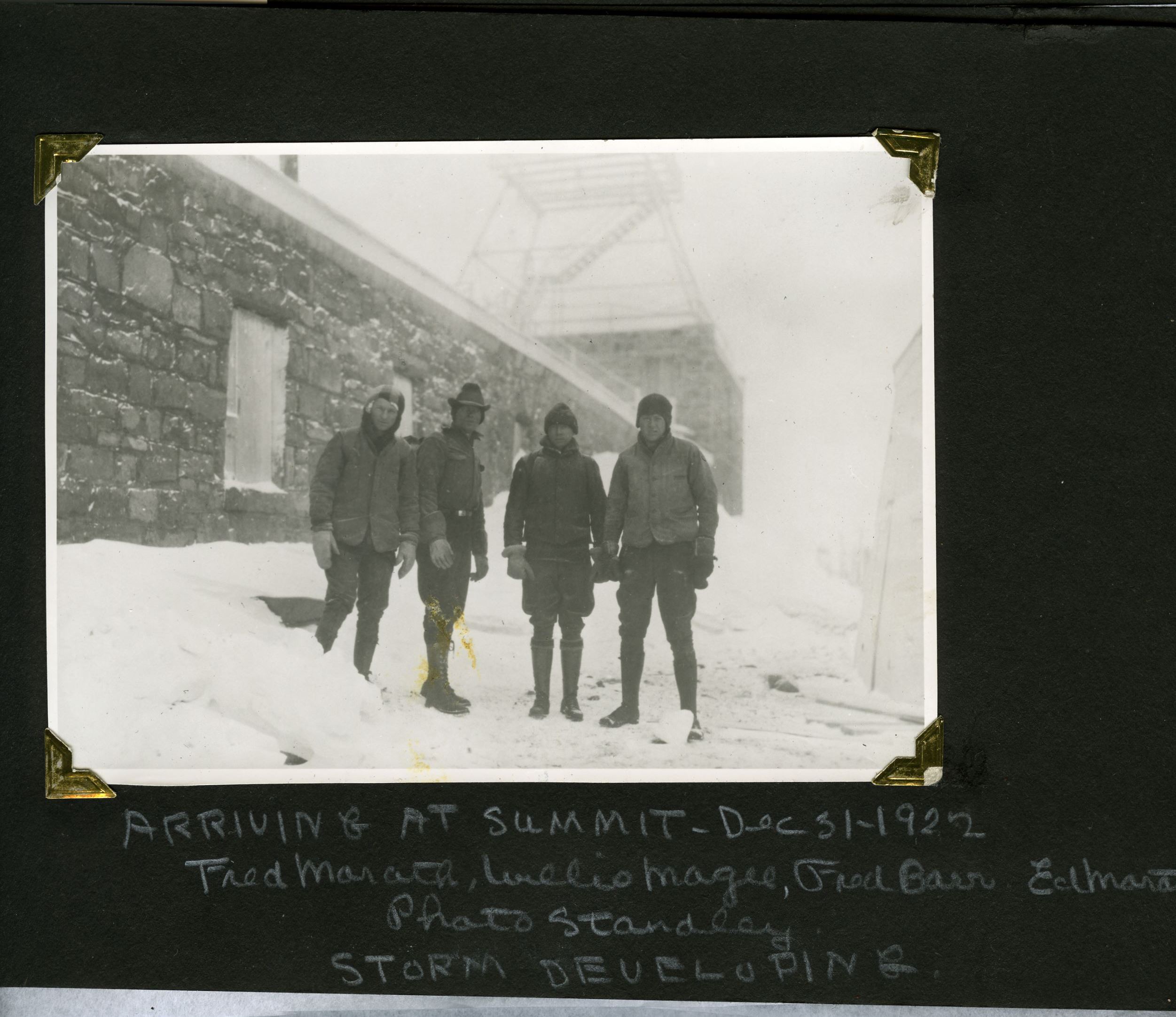 Courtesy photo / Colorado Springs Pioneers Museum Taken December 31, 1922 four members of the Frozen Five stand near the shelter on the top of Pikes Peak. According to the AdAmAn website, at the stroke of midnight, they lit the flares and the other fireworks they had hauled up the mountain... 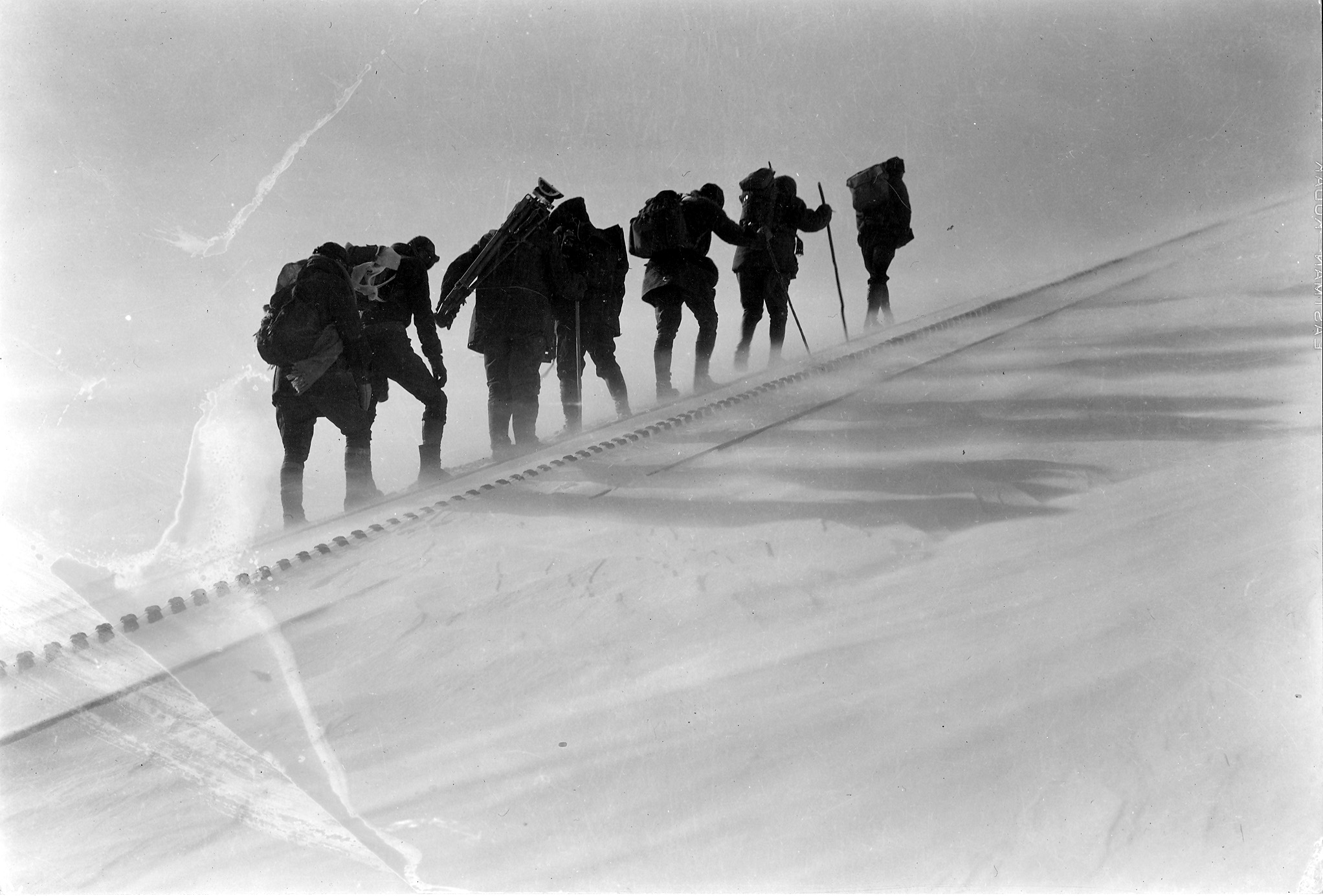 The weather on Pikes Peak is unpredictable, especially in the midst of the Colorado winter. Wind chills of 50 degrees below zero and icy, snow swept slopes are the norm. But for the past 97 years, a group of determined mountaineers has made their way to the summit of the 14 thousand-plus-foot peak to carry on a special New Year’s tradition.

They’re called the Pikes Peak AdAmAn Club — named for the tradition of adding one man (or woman) to the ranks each year. Dan Stuart, current club president, says the weather doesn’t make much difference. In fact, he says hiking in the snow alongside the other members is something he looks forward to even more than their annual fireworks show that can be seen from hundreds of miles away on a clear night.

“I think you have to be a little twisted to do this kind of thing in the middle of winter,” Stuart jokes. “But some people really love it and other people don’t apply.”

He says apply because the club has a vetting process and members vote on their newest member each year. This year’s pick is Stuart’s son, Tyler. He’s climbed with the group before but this time he’ll lead them up the mountain, following a trail even when it might be under the snow.

“There are times when it’s hard to keep track and at least one year where we just turned and went straight uphill, which was awful. But it worked,” he says.

If it’s visible, they follow Barr Trail up the mountain and stop halfway at Barr Camp. The longstanding trek to the summit begins the following morning, on New Year’s Eve.

68-year-old Ted Lindeman completed his first hike with the group at age 16. That was unusual considering his age. But he says there was a reason — the deep snow.

“[Someone suggested] one solution would be to have a two or three teenager human snow plow lead us through that zone. And so, I got to be a repeating member of the human snow plow,” Lindeman laughs.

He doesn’t do that anymore, nor does anyone else. Now, he hikes and enjoys the conversation and companionship of his fellow AdAmAn members who have dedicated this year’s journey to him. It’s Lindeman’s 50th trip up the mountain and his excitement hasn’t waned over the years— especially for the fireworks.

“And I've only missed three years,” he says. “One year I was living in Vermont. One year I realized I had married the wrong girl. And another year I was writing a thesis. At least two of those are good excuses.”

As a veteran of the group, Lindeman remembers a few AdAmAn traditions that have gone by the wayside. For instance, the club whistle from the first few decades of its existence. He says it was used as a signal, even in everyday life.

“Supposedly a number of the early members were downtown businessmen and would pass each other on their way to the coffee shop or something like that,” he says.

The current club members make a point to continue some of AdAmAn’s original practices, if not the whistle, including using mirrors and the sun to signal their progress to the city below.

The men who first braved the peak’s treacherous terrain in 1922 are referred to as the "Frozen Five.” Their equipment that day consisted of hobnail boots, breeches, stocking caps, sheepskin coats and silk stockings for face masks, according to the club’s website.

"Since the snow was so deep that year they decided to tackle the peak via the Cog Railway Route, which began its operation in 1889. While this was a shorter route, 9 miles compared to the 13 miles on Barr Trail, it was also considerably steeper and more dangerous, with grades as much as 27% in the last two miles,” the website reads.

“We have such a firm and enduring link to the mountain,” Mayberry explains. “And to have it even in the depths of the winter at midnight on New Year's Eve, that mountain is still the chief thing that many of us in Colorado Springs think about.”

Mayberry adds that the club feels of a different time.

“There is a lot of conversation about loss of social connections because of many reasons, and largely to do with the internet. But these connections and traditions matter,” he says.

That’s especially true for Dan and Tyler Stuart. While they’re not the first father-son duo to be in the AdAmAn Club, the sentimental aspect of this year’s journey is not lost on Dan.

“He's climbed about 49 or 50 fourteeners and done lots of other extensive hikes and some amazing climbs in Yosemite, too. He's earned the right to be on the hike,” he says looking at his son. “And now to have him be a member, it just helps me know that maybe I can stop hiking pretty soon and [he’ll] carry on the tradition.”

As will people from miles around as they stay up to watch the fireworks and ring in 2020.

Editor’s note: Matt Mayberry is a member of KRCC’s Community Advisory Board.