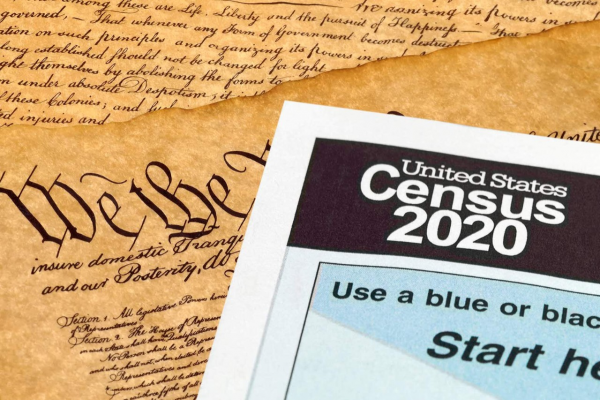 You probably got a letter in the mail recently from the U.S. Census Bureau asking you to fill out its survey. And maybe you're thinking, I don't have time for this! I just lost my job and I don't know how I'm going to pay my mortgage in the next couple of months! My kids are home and they're driving me crazy!

But filling out that survey to help the Census Bureau get a full and accurate count of America is really important.

"It's how we distribute our public funding," says Evan Curtis, the state planning coordinator with the Utah Governor's Office of Management and Budget, who helps with census outreach efforts.

He says federal and state agencies figure out how much money to give an area based on how many people are there.

"So these are big programs like Medicaid, CHIP, Title 1 funding, transportation funding-things that impact a lot of people," Curtis says.

The census, which is conducted every 10 years, also informs political representation-how many lawmakers a place gets to send to state capitols and Washington, D.C.

"And with the West changing and growing so rapidly, it's going to be really important to get these accurate counts and make sure people are represented fairly," Curtis says.

COVID-19's making the census count even more complicated than usual. College students, for example, have left campuses early, which could decrease the population count in some towns, Curtis says. And the pandemic's delaying door-to-door delivery of census forms in some parts of the country, especially rural areas.

Even without COVID-related delays and complications, some residents are reluctant to respond to the census anyway.

In Nevada, for example, the Latino community accounts for at least 29% of the population but has historically been undercounted, in part due to distrust of the federal government. This distrust-in Nevada and across the country-was exacerbated when the Trump administration proposed adding a citizenship question to this year's census.

"There's so many undocumented individuals that live in our communities, they would have hesitated and perhaps not even participated in taking the census," says Michael Moreno, who's doing census outreach within the Latino community.

The administration's proposal to add the citizenship question failed, but many Latinos are still apprehensive. Moreno wants to reassure people that the process will be safe, secure and confidential.

"That information will not be shared by U.S. Census Bureau employees or government employees with any state, federal or local agencies, law enforcement, IRS, Immigration," Moreno says, adding that there are stiff penalties for census workers if they do share confidential information.

Still, there's concern that many in the Latino community still won't participate. And that would ultimately lead to official counts being lower than reality.

There's another group in our region and across the country less likely to take part. In the last census, Native people living on reservations were undercounted by nearly 5%.

Michael Yellowplume is heading up census outreach efforts for the Northern Arapaho Tribe on the Wind River Reservation in Wyoming. At an educational event in early March, he explained to tribal members how an undercount could hurt them.

"A lot of families depend on TANF," he said, referring to the Temporary Assistance For Needy Families program. And on the Indian Health Service, which provides medical services to tribal citizens. "The government funds all that. So if we're low on numbers we're gonna be low on funding that we need for the people."

For the first time, the census is being conducted primarily online, and Yellowplume's worried that could compound the undercount in Indian Country.

"I believe that's the biggest obstacle that we run into is people don't have access to the internet," he says.

On the Wind River Reservation, only a third of households have internet access. There was a plan to set up internet hotspots around the reservation, Yellowplume says, but that's been put on hold due to the COVID-19 pandemic.

There would be all sorts of consequences from a low count. Take housing. Census numbers inform federal funding for housing, a persistent problem on the reservation. Charles Washakie, who directs the housing program for the Eastern Shoshone Tribe, says it's not unusual for two or three families to occupy a single home, yet those families often won't disclose that on census forms for fear of losing their housing.

"If we're overcrowded in most of our units, that [information] helps us get funding," Washakie says. "People don't understand that."

He says his office is chronically underfunded. They haven't built a new unit in more than 20 years. But he hopes an accurate count could change that.

Just another example of how the 2020 census could be transformative in Indian Country-for better or for worse.

Do you have questions about COVID-19? How has this crisis affected you? Our reporters would love to hear from you. You can submit your question or share your story here.