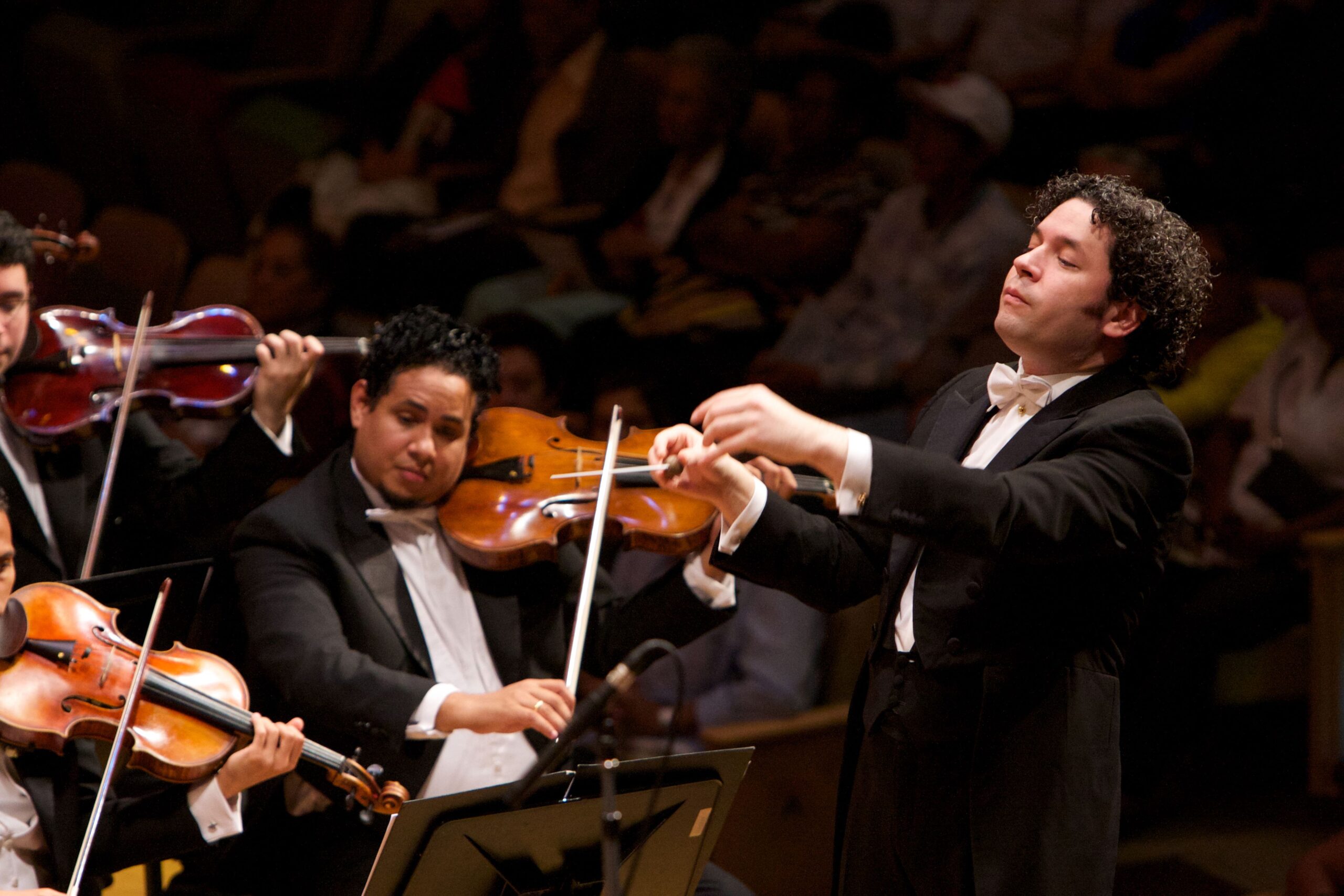 We often imagine Mozart and Beethoven as the rockstars of their time. But this summer, our Summerfest “Summer of Stars” concert series is featuring today’s classical rockstars. While instrumentalists like Sheku Kanneh-Mason and Lang Lang capture audiences online and onstage with their talent, conductors spend most of their time with their back to the crowd. And yet- is there a bigger star than Gustavo Dudamel, the charismatic, curly-haired conductor of the Los Angeles Philharmonic?

Stepping Up to the Podium

Gustavo Dudamel began with hopes to play trombone like his father, but while he waited to grow into the cumbersome instrument, he was given a child-sized violin, and found a home in the symphony orchestra. He began to study scores, and remembers setting his toys out in front of him, turning on a symphony recording, and conducting his “orchestra.” Dudamel joined the “El Sistema” youth orchestra, a program founded by Venezuelan national hero José Antonio Abreu, where he and his friends learned social responsibility and discipline, and where they were safe from the streets.

Today, in addition to his role as conductor of the Los Angeles Philharmonic and international guest conducting gigs, Gustavo Dudamel is still the chief conductor of the Simón Bolívar Symphony Orchestra of Venezuela. However, he is banned from his home country, which is in a period of serious unrest. After a 17-year-old “El Sistema” violinist was killed in 2017 during police crackdowns, Dudamel spoke out against Venezuela’s President Maduro. His planned international tour with “El Sistema” was immediately canceled and the maestro was not allowed to enter the country to work with the orchestra any further.

While some were elated that this international star was speaking out against the corrupt government, many Venezuelans felt that this was too little, too late. Three years later, Venezuelans are still calling for more support from their famous expats. Dudamel meets with orchestra leaders remotely, and with orchestra members outside of Venezuela whenever he can.

A Passion for Kids

Dudamel is a champion of youth music, not only in his native Venezuela, but in schools and rehearsal rooms across the world. His success has inspired the creation of “El Sistema” orchestras everywhere from L.A. to Scotland, Sweden, Japan, even Colorado! Dudamel leads the L.A. program, the Youth Orchestra of Los Angeles (YOLA). Additionally, he travels to meet with students of all ages, even sitting down in the violin section and playing alongside students to encourage them to continue making music. It’s part of Dudamel’s commitment to an equal opportunity and access to music for all kids. “El Sistema” has given even the poorest and most unlikely students the chance to gain life skills, encouragement, and discipline to succeed. He’s adamant that whether or not a student becomes a professional musician, having any form of art, especially music, as a part of their life is incredibly important. He says it saves lives.

Dudamel doesn’t just reserve that soft side for kids. He’s known around the world for his big smile and infectious excitement. It’s part of what makes him such a star. Instrumentalists value his collaborative approach, the give and take between the orchestra and the conductor. And audiences smile watching the maestro throw his entire body into the music, dancing to the LA Phil’s performance of a John Williams suite, a Mozart concerto, or a Brahms symphony.

His unpretentious character has earned Dudamel appearances on Sesame Street, in the 2016 SuperBowl halftime show with his YOLA (Youth Orchestra L.A.) students and Coldplay, as the animated maestro “Trollzart” (think Mozart) in the movie Trolls World Tour, and as inspiration for the character Rodrigo in Amazon’s Mozart in the Jungle series. In addition to guest-conducting major orchestras like the Berlin and Vienna Philharmonic, Dudamel conducted for the live-action Disney Nutcracker film and will conduct for Stephen Spielberg’s upcoming West Side Story movie musical. These projects, and his commitment to youth organizations have made Dudamel a household name.

Dudamel recently signed on with the LA Phil through the 2025-26 season, which will be his 17th with the orchestra. Though the organization has cancelled its in-person performances this fall due to COVID-19, they will deliver distanced or virtual performances with the likes of Kristin Chenoweth and Brandi Carlisle, virtual masterclasses, and will release their recording of Charles Ives’ complete symphony cycle.

Listen this weekend for the Simón Bolívar Youth Orchestra playing Beethoven’s 5th Symphony and Bernstein’s “Mambo” from West Side Story, as well as the Los Angeles Philharmonic with John Williams’ E.T. soundtrack and the Vienna Philharmonic with Mussorgsky’s Pictures at an Exhibition- all conducted by the excellent Gustavo Dudamel!