Colorado’s Congressional Redistricting Commission still has a few more days to reach a super-majority agreement on a new map. But if commissioners can’t hit that deadline, we now know what the state’s congressional districts will look like.

That’s because the constitution says that, should the commission not reach an agreement, a map drawn by nonpartisan staff will be submitted to the court instead. That map was released Thursday afternoon.

It’s known as the "Third Staff Plan," and it appears to take the current congressional lines as a starting point, only to tweak and shift them instead of a full reimagination.

Politically, the map creates four Democratic seats, three Republican ones, and a swing district that leans just a hair to the left.

Compare all of the proposed redistricting maps and what Colorado's districts look like right now: 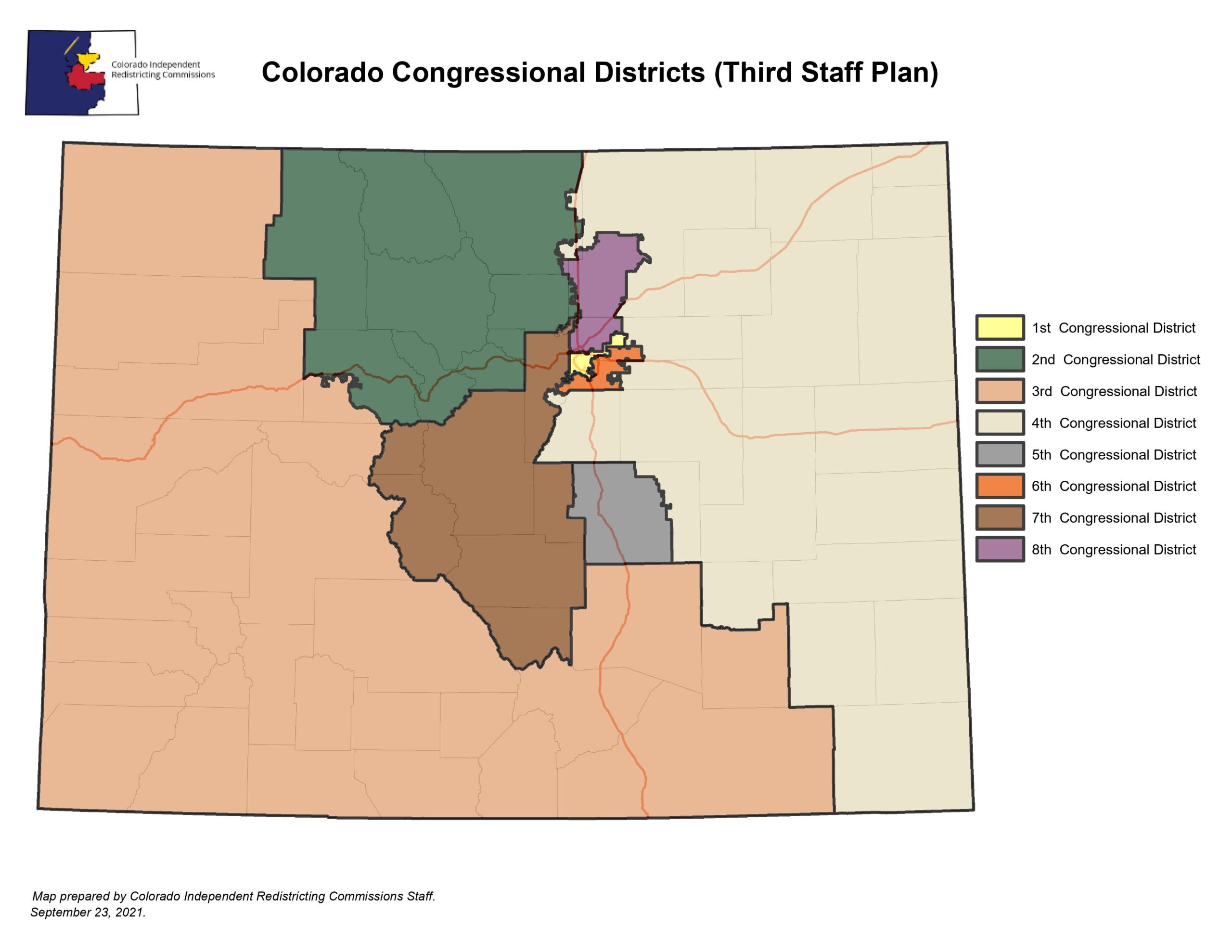 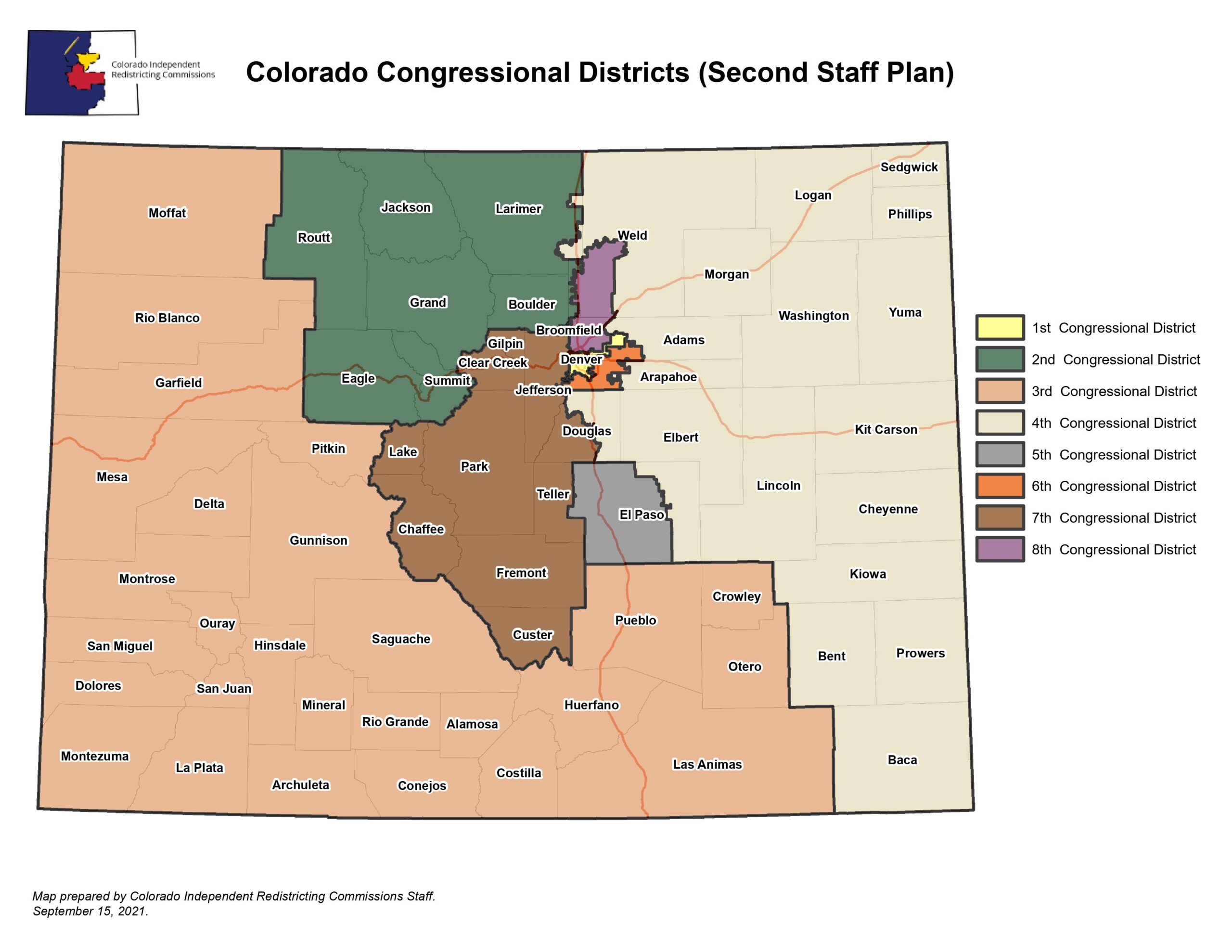 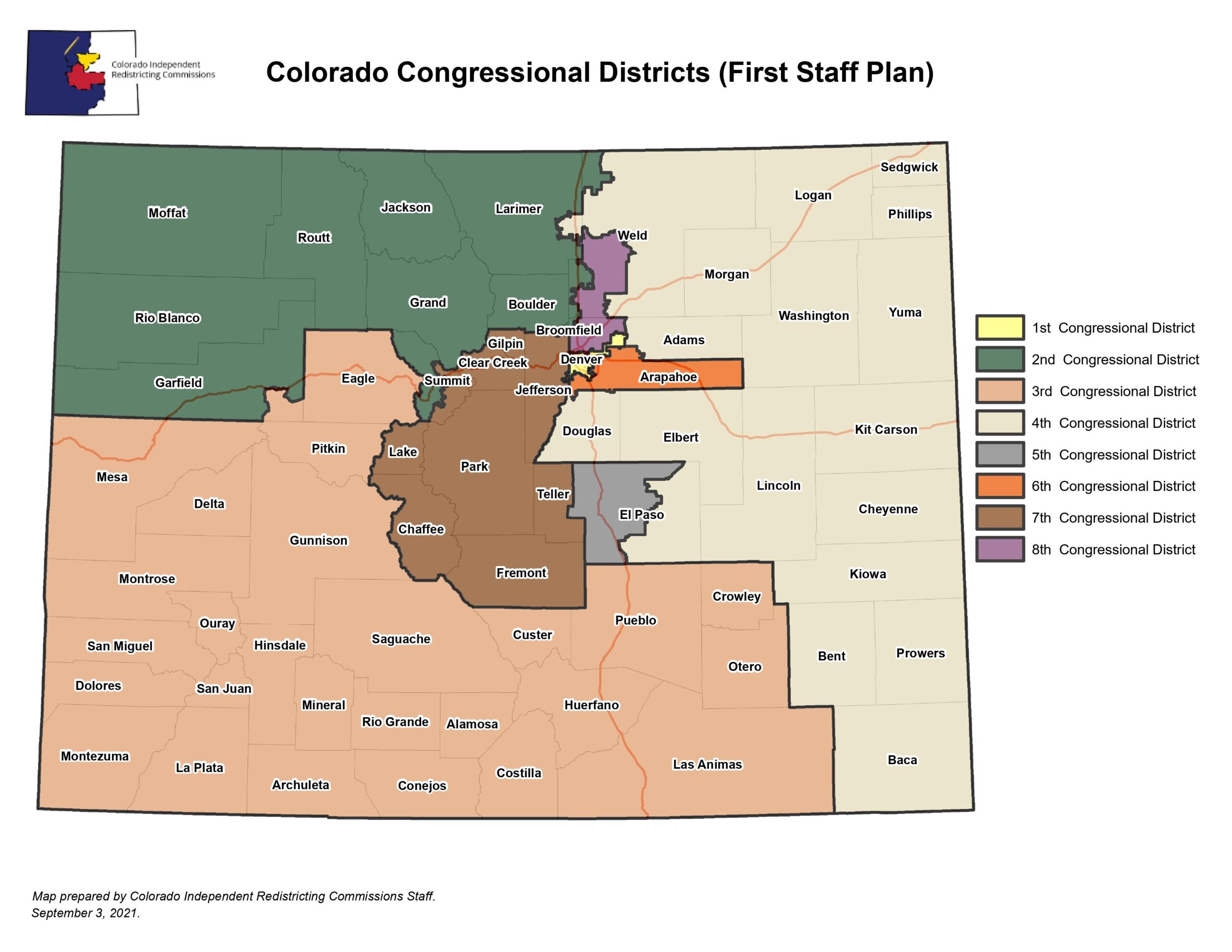 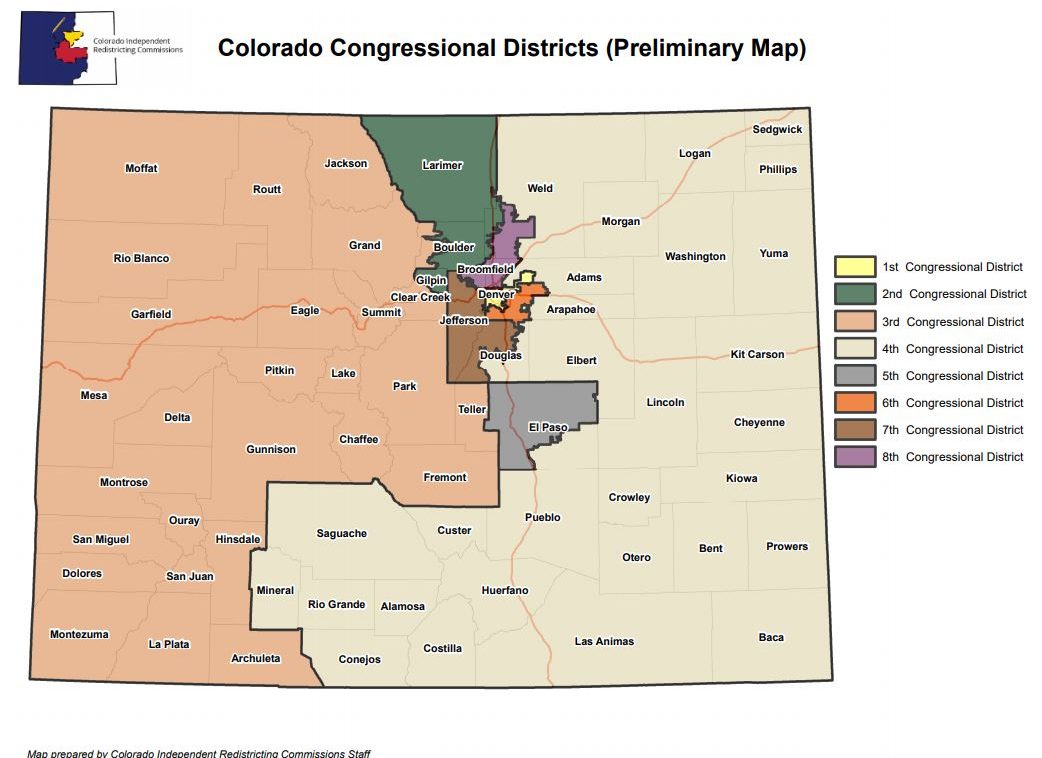 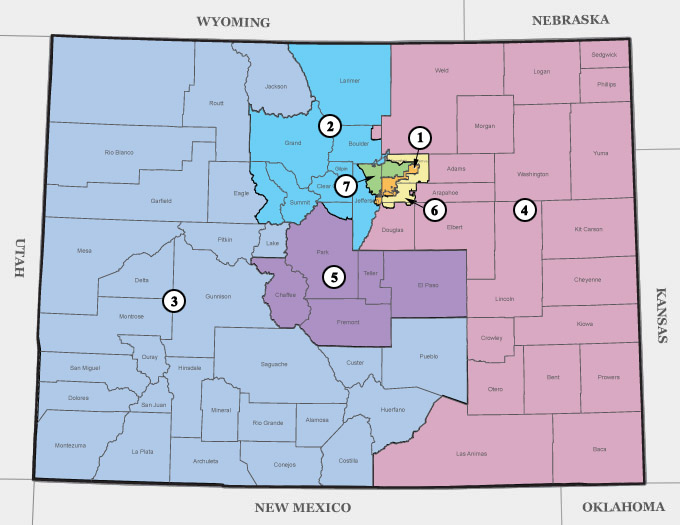 Racial and ethnic considerations have played a big role in this process, with Latino groups lobbying heavily for district lines that reinforce their political voice. This map envisions three districts where whites make up less than 60 percent of the population: the 1st, 6th and 8th congressional districts. The new CO-8 would be the most heavily Hispanic, at 38.5 percent of the population.

Here’s a quick summary of how the districts would change under this map:

CO-1 — This district is Denver, basically. It’s always been Denver and — because the commission is charged with prioritizing political subdivisions and communities of interest — was never likely to change much. It’s also the state’s bluest district, with Democratic candidates enjoying, on average, a 67-point advantage over Republicans.

CO-2 — This mountain-heavy, Boulder-anchored district is the state’s second-most Democratic, with a 34-point spread in their favor. Under the new map, the district’s eastern border along Interstate 25 shifts a bit. It also gains Jackson and Routt counties from the 3rd district, while losing parts of Eagle and Jefferson counties.

CO-3 — This district has emerged as the great battleground of the redistricting process, with some commissioners pushing the idea of reimagining it across the southern half of the state. In the new staff plan, it retains much of its current shape; losing some mountain territory while gaining Las Animas and Otero counties in the southeast. The district would likely stay Republican — they enjoy an average nine-point election advantage.

CO-4 — This massive Eastern Plains district would pick up the eastern side of El Paso County, but lose communities along I-25 and U.S. Highway 87 in Weld County to the new 8th district and two rural counties to the 3rd district. The district would be the reddest in the state.

CO-5 — In 2010, Colorado Springs was still small enough that the district based in the city included four mountain counties. But the new map captures how much the city has grown; it’s now big enough to essentially become its own district, similarly to Denver, shedding not just its mountain portions but the eastern third of El Paso County as well.

CO-6 — This suburban Denver district would cover all of the city of Aurora and the south metro cities in Arapahoe County, while losing northern portions to the new 8th district. It would be strongly blue, with a 15-point Democratic advantage.

CO-7 — This district would see one of the biggest border shifts, going from being entirely based in Denver’s northwestern suburbs to becoming a “Front Range” (in the mountain sense) district. It would gain all of Jefferson County, as well as the four mountain counties that used to be in CO-5, and Custer and Lake counties as well. Democrats would keep a seven-point advantage for the seat.

CO-8 — One thing that hasn’t changed much in any of the draft maps contemplated by the commission is the general location of this new district along the high-growth corridors of the northern Front Range. This new map would make it by far the most competitive seat in the state, with Denver’s heavily Democratic northern suburbs balanced out by conservative Greeley and nearby communities in the north.

Something to consider going forward: While this is a staff map, it was created at the direction of commissioners, who voted on specific tweaks to earlier versions, so even if it does end up being adopted, they will have played a pivotal role in its crafting.

But the commission has made it clear it hopes to avoid submitting the staff plan by default. Commissioners plan to work this weekend and into next week in the hope that they can vote a final map through to the court by Tuesday’s deadline.

Editor's Note: This story has been corrected; the original version said CO-8 would lean slightly toward Republicans. The slight advantage is actually in favor of Democrats.