Margaret Brown is most famous for surviving the 1912 sinking of the RMS Titanic. The Denver socialite and philanthropist’s escape from that near-death experience earned her the posthumous moniker of “The Unsinkable Molly Brown.”

While the musical ends with a happy ending in the Rocky Mountains, in reality, Brown’s adventures had only just begun.

Brown played a key role in helping to rebuild the devastated towns of northern France after the First World War -- efforts that later earned her the French Legion of Honor award.

An understated exhibition at Denver’s Molly Brown House, the home Brown owned in Denver from 1894 until her death in 1932, highlights Brown’s wartime relief efforts abroad.

The exhibition is titled “A Call to Arms. It features a small collection of black-and-white photographs depicting the female volunteers of the American Committee for Devastated France, better known in France for its French initials, CARD (Comité Américain pour les Régions Dévastées de France).

CARD was founded and led by Anne Morgan, a friend and colleague of Brown’s and the daughter of banker J.P. Morgan, and Anne Murray Dike, a doctor. The organization was created to provide support to the civilians in the war zones of France and was headquartered at Château of Blérancourt, a once grand castle located 40 minutes outside of Paris that was heavily bombed during the war.

One image captures a young child with dirt on her face, clinging to a loaf of bread. In the background there are rows of buildings that show signs of war. Another picture from the collection shows a mother and child sitting in front of their dilapidated, bombed-out home. 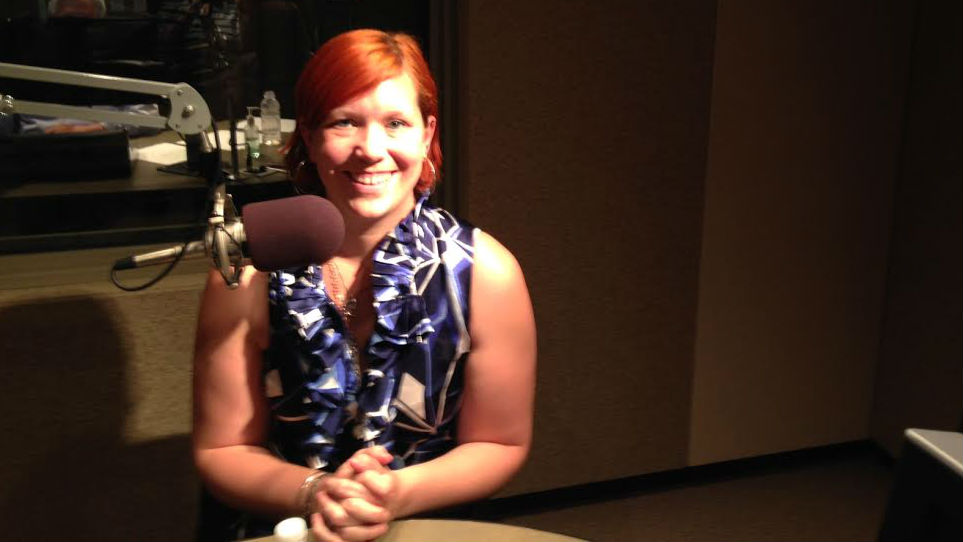 (Photo: CPR/Stephanie Wolf)Jamie Melissa Wilms, the director of education at the Molly Brown House, joined Chloe Veltman, host of CPR’s weekly arts show, “The Colorado Art Report,” in studio earlier this week to talk about the narratives that unfold through these photographs.

Here’s a preview of the interview, which can be heard in full on The Colorado Art Report this Friday at 10:30 a.m. and 7:30 p.m. The segment is also available online on demand.

CPR: How does this collection of photographs capture what Brown and the other female volunteers encountered in France between 1917 and 1924?

Jamie Melissa Wilms: From 1917 to 1924, there were 350 women who actually saw this devastation in France and they wanted to do something about it -- France was a second home for a lot of these women. They went to the Château de Blérancourt in northern France and set that up as a place of relief to help those affected by war. The collection truly shows the devastation of what was happening during World War I in France, which was something that, at that point, we weren’t experiencing here in the United States.

CPR: How was Brown involved with CARD?

Jamie Melissa Wilms: She worked closely with Anne Morgan, the founder of CARD and the daughter of banker J. P. Morgan, and also Anne Murray Dike, a physician. She brought supplies from home and even drove mobilized ambulances.

CPR: This exhibit highlights a specific time period from Brown’s life. But Brown continued her humanitarian activism when she returned to Denver. What were some of the initiatives she took on after her return?

Jamie Melissa Wilms: Margaret helped start the Denver Dumb Friends League. She worked to start the first juvenile justice system here in Denver. She also fought for miners’ rights after the Ludlow Massacre. And she was very active in women’s suffrage, speaking at the Conference of Great Women. She helped get that pushed nationally and here in Colorado too.

“A Call to Arms” can be viewed at the Molly Brown House now through September 28. For more information, visit MollyBrown.org.