Oil prices are the lowest they’ve been in five and a half years. That means it’s cheaper to fill up gas tanks, but the trend threatens Colorado’s oil boom, according to economist Martin Shields, director of the Regional Economics Institute at Colorado State University.

Right now a barrel of oil costs less than $50 on the international market, down by more than half in recent months. If prices stay this low, it won't be profitable to extract oil from Colorado's shale fields, he says.

The state's agency in charge of issuing drilling permits, the Colorado Oil and Gas Commission, says applications for permits were down in December to 70. That's compared with 78 the month before. A spokesman for the commission says it's not clear whether that's a normal fluctuation or an indication of a decline.

In order for the industry to continue creating jobs, it has to continue opening new drill sites, Shields says.

"Once you've got the well operational, you need a lot less labor," he says. "So the economic activity really comes up through the drilling and exploration process."

Stock prices for Noble and Anadarko, two of the biggest producers in the state, have fallen 30-45 percent over the past six months. 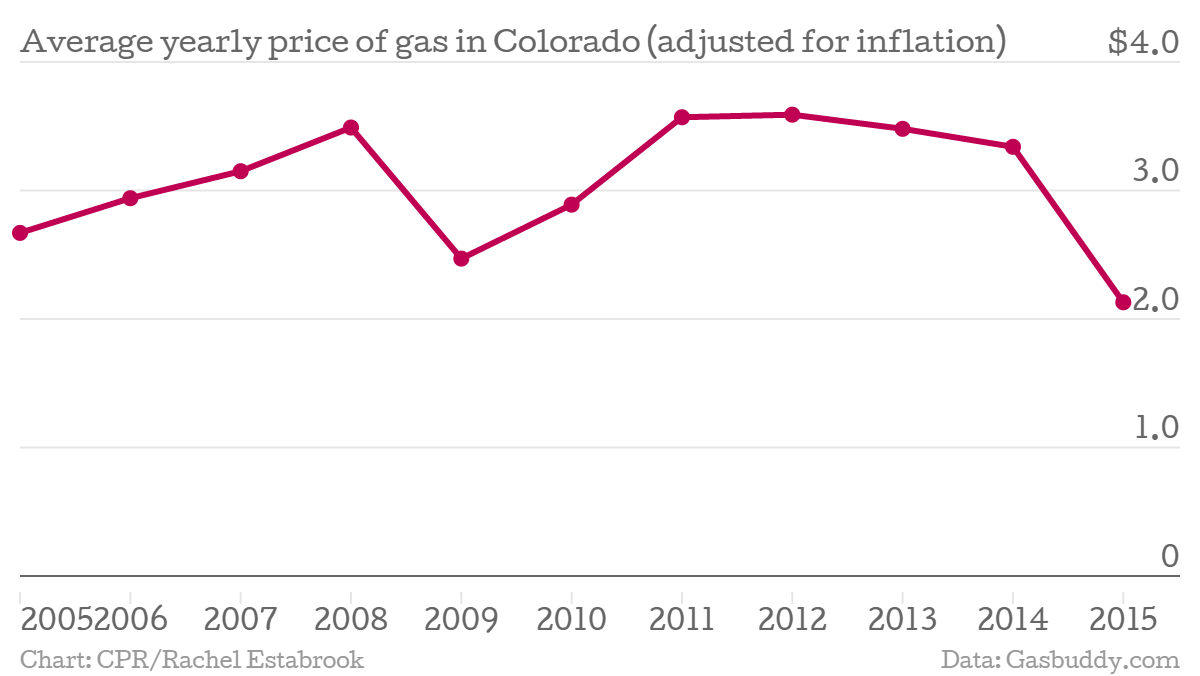 Ultimately, though, Shields predicts any harm caused by slowing production will likely be neutralized statewide by the economic benefits of lower gas prices.

The "trillion dollar question," according to Sheilds, is how long oil prices will remain this low. Shields' colleague at Colorado State University, John Elder, an economist and expert on oil prices, has a guess.

"Could we be down to $30 a barrel in the next couple months?" Elder says. "Certainly this could happen. Do I think we’re going to be at $50 a barrel a year from now? Two years from now? No, I don’t think so. I think the same factors that caused us to have $100 barrel for quite some period of time are going to come back into play."

Highlights from interview with Martin Shields

"Here's an industry that's about one percent of total employment in the economy, but it's generated about four percent of the state job growth since the recession ended. And if you think about what we think of as spin-off effects, it might be eight or 10 percent. So it's been a huge economic engine in Colorado."

"On the supply side, we've got the major producers in OPEC, and they've kind of said, we're willing to put up with this. We can pull this stuff out of the ground for $25 or $30 a barrel, we're going to keep our market share... North American shale [also] increases the supply. And that pushes prices down.

"On the demand side, we see the kind of negative pressures on prices there, as well. We've got the slowdown in China's growth. We've got the U.S. switching to more fuel efficient vehicles. We've got pretty soft economies in Europe. So a lot of reductions in demand coupled with increases in supply will lead to pretty dramatic price falls."

On what the trends could mean for Colorado's cities and towns

"The impacts are mostly going to be felt where the drilling is happening... and about 80 percent of the oil production is in Weld. And over the last couple years they've seen about a $60 million increase in property tax revenues. So they've been able to do a whole bunch of things, in terms of roads and infrastructure, recreation... and they're going to feel this through reductions in property values."