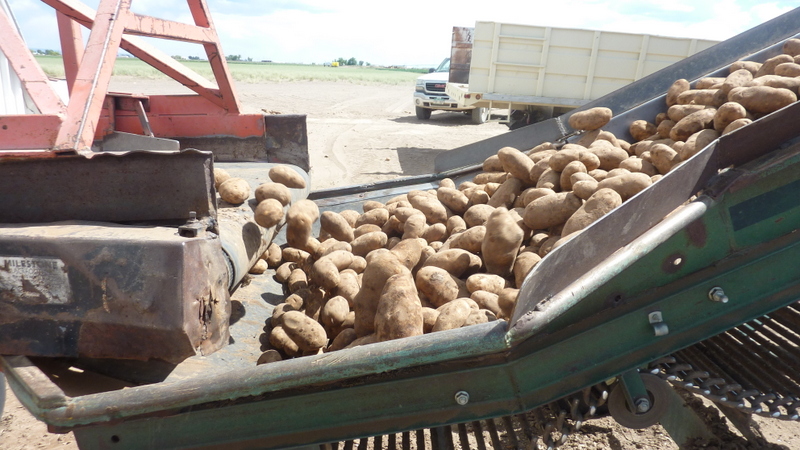 Maeve Conran A conveyor belt transports potatoes from Shriver's storage shed to a bagging operation. This load of potatoes is headed for North Carolina. 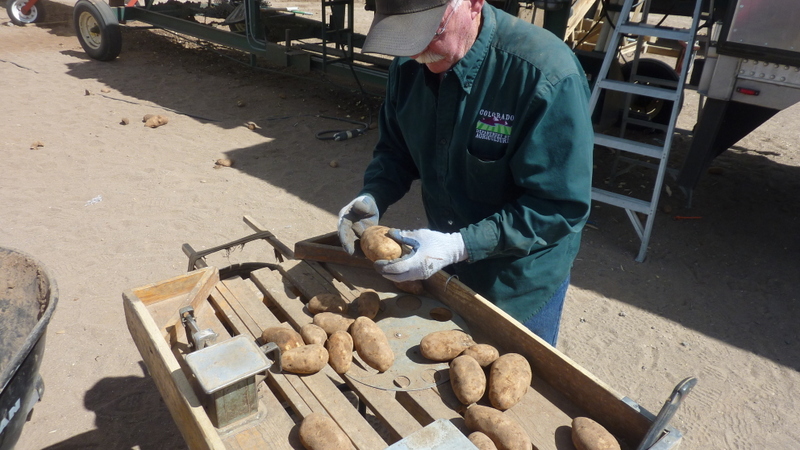 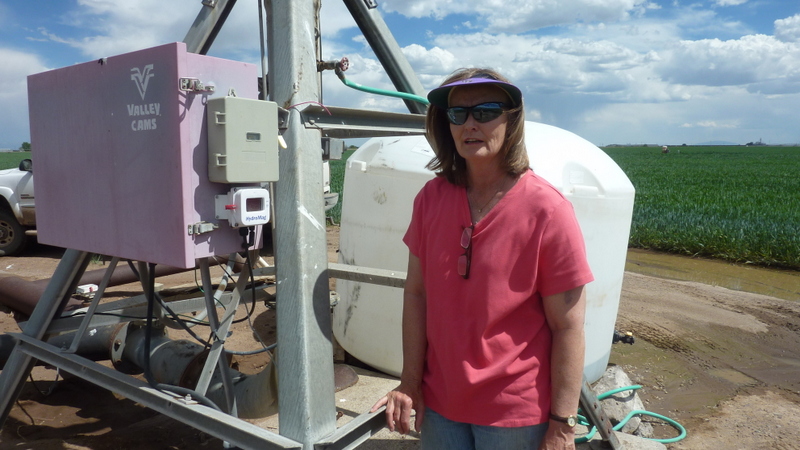 Maeve Conran Karla Shriver stands by a pumping system that draws water from the aquifer. 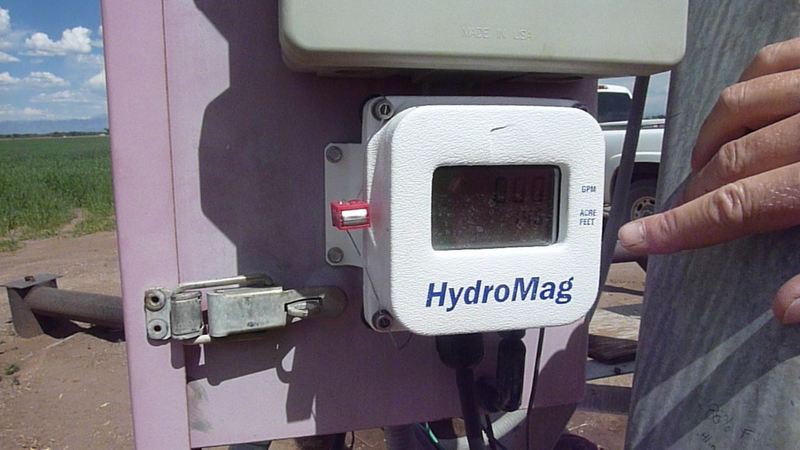 Maeve Conran A hydro pump meter which shows how much water Shriver draws from the aquifer. 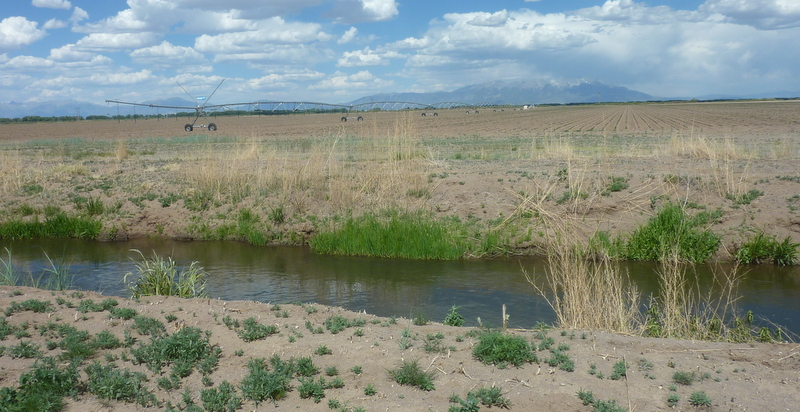 Maeve Conran One of the irrigation ditches on Shriver's farm. The ditches run dry by the end of May, which means Shriver relies solely on the aquifer for irrigation water for most of the summer. 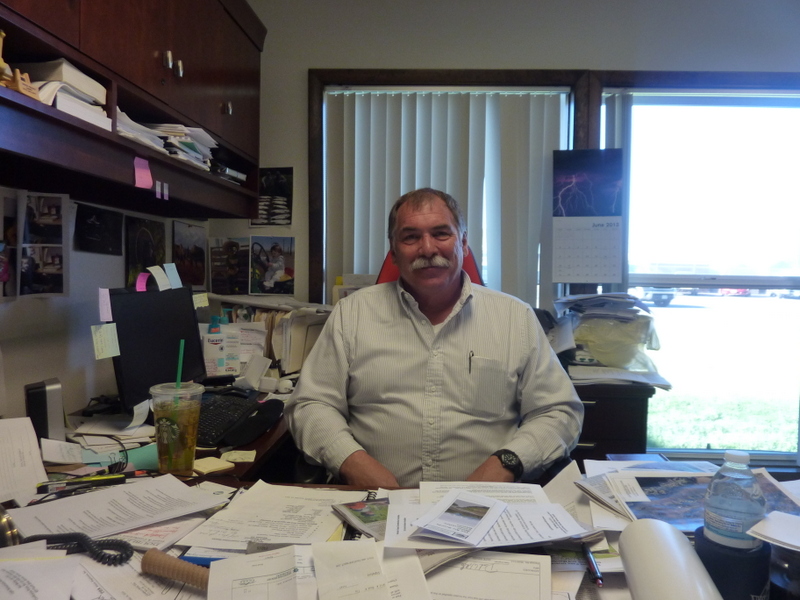 Maeve Conran Steve Vandiver, General Manager of the Rio Grande Water Conservation District, in his office in Alamosa. He’s charged with stopping the depletion of the aquifer in San Luis Valley, and is working to create subdistricts. 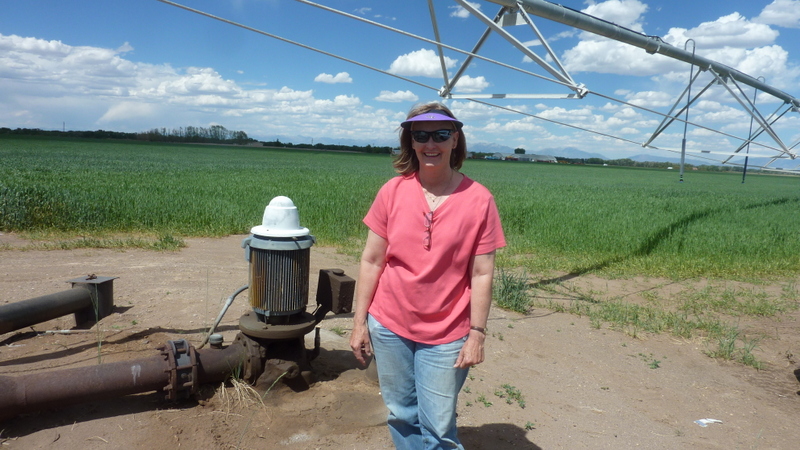 Maeve Conran Karla Shriver stands by one of the many pivot sprinkler systems that she uses to irrigate her farm, just north of Alamosa. She irrigates her land with water from ditches and the aquifer, and is concerned about the depletion of the aquifer.

In early July, Colorado designated 14 counties "primary natural disaster areas" due to agricultural losses caused by the recent and ongoing drought.  Several of those counties are in the San Luis Valley in south central Colorado.  Farmers there are now eligible for low interest emergency loans, but as KGNU’s Maeve Conran reports, that may not be enough for this agricultural hub, which is facing a long term water crisis that could permanently affect the entire valley.

Thousands of potatoes go by on a conveyor belt under the watchful eyes of farmer Karla Shriver and a local ag agent.

"Every load is inspected by the state of Colorado,” Sriver says, “so we know the quality of our potatoes going out."

The potatoes are from last years crop.  Shriver held them back from market until this spring in the hopes of getting a better price.  Now, they're headed to North Carolina.

Shriver has farmed in the San Luis Valley for nearly 30 years. Her roughly 800-acre farm stretches across Rio Grande and Alamosa Counties, and she relies on both surface and well water to irrigate her crops.

Shriver's surface water ran out at the end of May, and now she relies on water pumped from the shallow unconfined aquifer, one of the valley’s two major underground reservoirs. Shriver and other local farmers are now acutely aware that even that water is running out.

“That aquifer is in serious decline,” Steve Vandiver says.

Vandiver is the general manager of the Rio Grande Water Conservation District.  He’s one of the people charged with solving the depleting groundwater problem, and that’s not easy.  For decades, the natural recharge of the aquifer has not kept pace with pumping.  The crisis was first identified forty years ago, resulting in moratoriums on new well permits.  Vandiver says eleven years ago, the situation got worse.

“We had 3 years of very severe drought, and it really brought to light a number of things that we hadn’t really known before,” Vandiver says.  “And since that time, the aquifer has been in a very serious decline.  And it’s just because we’ve been in effectively a drought since 2002.”

Now, the water district has to come up with a management plan to try and stabilize the situation.  Vandiver says they’re in the process of creating groundwater subdistricts that are specific geographic or hydrologic areas. The first subdistrict came on line last year.  Well owners there must now pay a fee to pump water.  That money goes toward achieving Its main goal - keeping their portion of the aquifer at a sustainable level.

"We haven't accomplished that yet,” says Vandiver.  “But we are buying water rights to formally recharge into the aquifer to help with that effort, and we've done a number of other tools trying to reduce the amount of pumping. One is a fallowing program, where we use some of that money to pay farmers to not pump."

Through the Conservation Resource Enhancement Program, The US Department of Agriculture has approved $120 million to help pay farmers in that first subdistrict to stop farming land.  The ultimate goal is to have 80,000 acres of land in the valley left fallow.  That’s a 20% reduction in farming which they hope translates to a 20% reduction in water use.  But recent rises in commodity prices have made the choice to fallow land less attractive.  Factor in evolving irrigation methods, the way forward to restoring the aquifers is less clear, says Michael Wisdom, executive director of the San Luis Valley Development Resources Group.

“What if I was more of a farm boy and just figured out how to make my water 125% more efficient?” Wisdom asks.  “If I figured out different ways to apply less water to a crop and still get the same yield, why would I fallow land?”

If local water authorities cannot stabilize the aquifer, state officials will come in with their own mandates and could shut off wells completely.  That happened almost a decade ago in northeastern Colorado, when the state engineer shut down 440 ground water wells irrigating 200 farms in the South Platte basin.

To help local residents tackle the problem themselves, farmer Karla Shriver, also a Rio Grande County Commissioner, sees the subdistrict plan as the lesser of many evils that come with drought.

“Of course we’re not happy with it,” Shriver says, “but it’s reality too.  We are over extended on what is grown and we are actually mining the aquifers.  Something has got to change or we’re all gonna be out of business.”

The Rio Grande Water Conservation District has survived four legal challenges to its plans for stabilizing the aquifers.  But now, there is a resigned acceptance that without better solutions, some farms will not make it through the current water crisis.

Connecting the Drops is a yearlong collaboration between Rocky Mountain Community Radio Stations and the Colorado Foundation for Water Education. Find out more at cfwe.org.