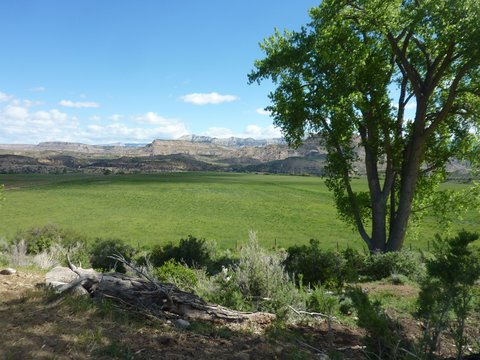 Maeve Conran Carver Ranch in Mesa County was bought in the 1970s by Ute Water District for its water rights. 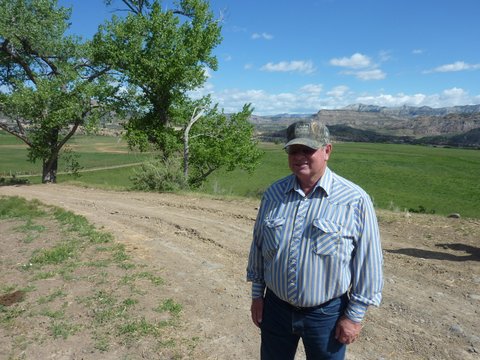 Maeve Conran Carlyle Currier, a 4th Generation farmer in Mesa County. He leases land that had been bought by a local water authority. The land didn't dry out because Currier has other water rights he can use on the land. That case is the exception.

Water has always been a source of conflict in the arid West, but in recent years the conflict between agriculture and growing cities has escalated as both entities compete for this limited resource. KGNU’s Maeve Conran has this story as part of our year long series Connecting the Drops.

Since the early 90s, the rate of population growth in Colorado has exceeded the national average, and since the year 2000, nearly one million people have migrated to the Centennial State. Demographers expect that trend to continue, reaching a total of nearly 6 million people by the end of the decade. This growth is expected mostly in the northern Front Range, and will continue to put even more pressure on an already scarce resource.

“Agriculture has a big target on it,” said Pokrandt. “There are willing ranchers and farmers who are willing to sell their water to the cities.”

In Colorado, water rights are like property rights, so they can be bought and sold. When water rights are sold, agriculture often stops on the land. It’s a practice called Agricultural Water Transfer, more commonly known as “buy and dry.”

Carlyle Currier, a 4th generation rancher on the Grand Mesa overlooking Palisade, is an exception. His great grandfather came to Mesa County in 1891, and he farms land that has been in his family for more than a hundred years. Currier also farms land owned by the Ute Water District, which provides water for Grand Junction and much of the Grand Valley. But the land hasn’t dried, because Currier has other water rights he can use on the farm.

“It’s been a good deal for me,” Currier said. But, he added, “It takes a lot of water to produce a ton of alfalfa, so it makes it easier for cities and municipal and industrial users to buy agricultural water and dry up agricultural land.”

That’s been the fate of thousands of acres of agricultural land in the state. Agricultural water rights in some parts of Colorado can fetch thousands of dollars per acre-foot. As Jim Pokrandt explains, for some farmers struggling to make ends meet, it’s a bittersweet deal that’s often too good to pass up.

“It’s a double-edged sword,” said Pokrandt. “The rancher wants to be able to sell his or her water right but then there’s also the concern in the ranching and farming community that we need to keep land in production.”

It’s that long-term impact on farming that has many people concerned. Buy and dry has been more prevalent on the Front Range where most urban development is happening. In the 1980s, the city of Aurora bought water rights to dozens of farms in the Rocky Ford area leaving dried up farmland in its wake. Similarly, in the northeast, Thornton bought 120 farms in the region for their water rights in 1986.

Brian Werner with Northern Water has been following the buy and dry phenomenon for 30 years. He says the Thornton water grab raised some alarm bells in the local agricultural community.

“The price of water in Northern Colorado has doubled in 2013,” Werner said. “So it comes to a point where the farmer says, ‘Boy do I sell it at this price and go to Tahiti for the year or retire comfortably, or do I still struggle with trying to produce a crop with everything that mother nature has to offer whether it’s drought or flood?’”

Approximately 80% of the state’s water goes towards agriculture, but that number is declining. In 1957, 85% of water rights on the Colorado Big Thompson Project in Northern Colorado were owned by farmers. Today, Werner says that number is 33%.

“There are farmers that look at their water supply as their 401K, it is how they’re going to retire,” said Werner. “And you aren’t going to take that away from them and nor do we want to. But there is still 600,000-700,000 irrigated acres in northern Colorado, the northeastern quadrant, that are producing a lot of wealth for the state of Colorado. So, there’s a huge economic impact with that as well.”

Werner and others advocate for increasing water storage in the state as an alternative to buy and dry. But reservoir expansion in Colorado has prompted opposition by many environmental groups. Werner says if municipalities don’t get the water from storage, they’ll buy it from the farms, drying up the land.

“We’re not going to stop buy and dry, that isn’t going to happen, but what we hope to do is make sure that that’s not the only alternative for our future growth.”

Other alternatives include creating conservation easements, to help protect water supplies. Also, instead of selling outright, some farmers are leasing a portion of their water rights to local cities. But water suppliers contend owning the rights is really their only supply guarantee.  Water managers and farming advocates throughout the state do agree that long-term solutions must be sought if the state’s farming industry is to be protected, and the state’s growing population is to have enough water.

Connecting the Drops is a year-long collaboration between Rocky Mountain Community Radio stations and the Colorado Foundation for Water Education.  Find out more at YourWaterColorado.org.