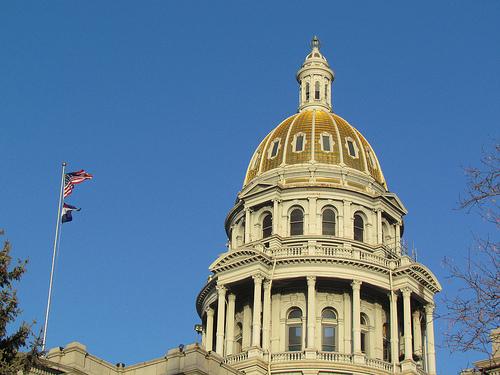 The annual legislative session is typically marked with plenty of partisanship – but this year lawmakers in both parties are working together on flood relief bills. As dozens of natural disaster bills are making their way in the statehouse, some of the more significant policies are stalled.

“When you’re in the minority party you think this is a really great place to be because you have a voice,” said Senate minority leader Bill Cadman (R-Colorado Springs), praising the flood disaster study committee for being a bipartisan effort.

“People got to work quickly on that and I think we’re doing really good work for the state,” he said.

That work includes more money to help impacted counties repair roads and limited liability to all volunteers responding to a disaster so they can’t be sued if something goes wrong. Democratic Representative Dave Young of Greeley, co-chair of the study committee, is sponsoring a bill to clarify that state funds can help communities come up with local matching Federal Emergency Management Agency funds.

“They don’t have the financial resources to come up with the 25 percent match,” said Young. “Some communities could only come up with 2.5 percent. There’s no way you can really be prepared for a crisis of this magnitude. In my area we still have a lot of people displaced by the flood.”

2013 was also a year for destructive wildfires. State officials also expect the wildfire season to become longer and even more devastating. Lawmakers are moving forward a tax credit to homeowners for removing trees from their property. There’s another measure to provide death benefits for seasonal firefighters killed in the line of duty.

But the boldest idea is still in limbo.

“We really need to get going and we’re running out of time and just like last year I see this going up to the last day and that’s very frustrating” said Senator Steve King (R-Grand Junction). He supports mitigation efforts in fire prone areas, but wants more state muscle to put out wildfires and prevent damage to watersheds.

“We have 4 million dead trees around our water, and that water provides life to 25 million people not only in Colorado but 6 lower basin states,” said King. “I can’t think of a larger priority.”

King is waiting for a state study on the cost effectiveness of an air fleet before moving something forward.

But lawmakers are not even considering some of the tougher proposals stemming from the Governor’s wildfire task force, such as a minimum statewide building code, a fee for people living near forests to pay for fire mitigation, and an upgraded mapping system that could show the fire risk on specific properties.

“One of the problems with mapping is the very people we may be trying to help we may be stigmatizing, their property values and creating an unintended glut in the market where you kind of get the scarlet letter,” said Democratic senate president Morgan Carroll.

Lawmakers say disaster relief will continue to be a top priority as they debate the budget later this month. Representative Dave Young warns that especially when it comes to flood victims many people are still hurting and displaced, and he hopes the state will have the resources to tackle those unmet needs.