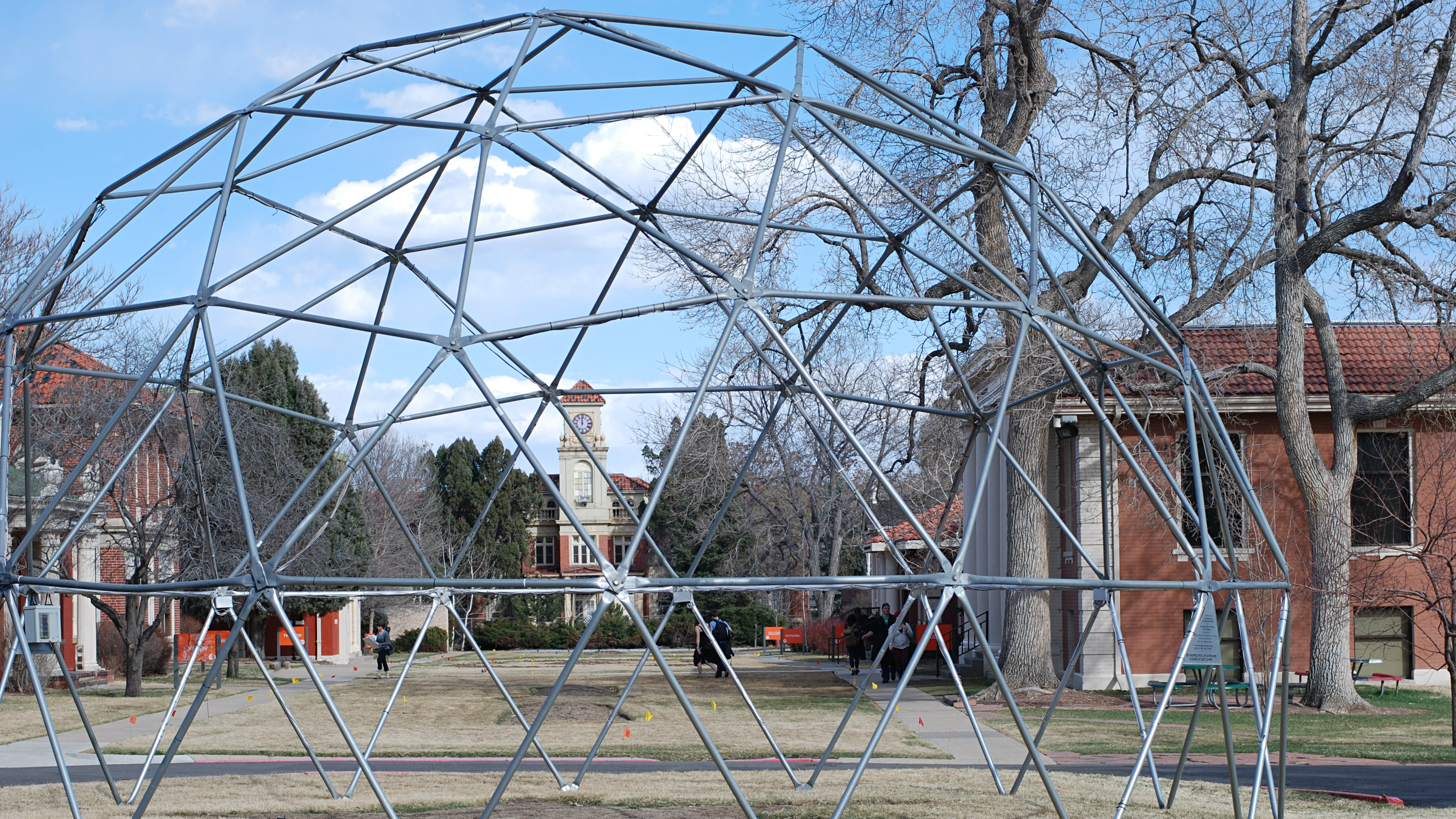 (Photo: CPR/Corey H. Jones)The Rocky Mountain College of Art and Design (RMCAD), a private, for-profit institution based in Lakewood, Colo., is finding new footing in a changing education landscape, much like many schools across the nation.

Once a small, family-owned arts college established in Colorado more than 50 years ago, the founding family sold the college to private investors in 2010.

As part of the transition, the school has made big changes to survive by adopting new teaching models, offering new classes and adding new leadership who embrace online education.

“We soon discovered the changes involved some deep cultural, academic, philosophical changes that really cut to the core of RMCAD’s history and reputation,” Julie Stewart-Pollack says.

Stewart-Pollack 16 years ago started as an instructor, moved to chair of interior design and finally became vice president before resigning in 2012.

"There was very little room for dissent," Stewart-Pollack says. "Many of us felt that we could no longer support the direction it was going.”

Since 2009, RMCAD has seen turnover in key positions including the president, academic dean, registrar and seven department chairs. Last year alone, more than 60 employees left the school for a range of reasons. While some staff chose to retire or pursue new career opportunities, a string of recent changes did prompt many of the departures.

School officials say the move to a hybrid model -- the school offers a mixture of online and campus options -- comes in part as a result of the shifting demographics of its student body.

According to RMCAD President Maria Puzziferro, the average age of incoming students is currently 27 and these “older” students typically demand more flexible and affordable alternatives when pursuing higher education.

"The college just couldn’t stay exactly the same way, the world was passing us by," Puzziferro says.

Schools across the nation face a similar predicament, according to University at Albany-SUNY Associate Professor Dr. Kevin Kinser.  Kinser also serves as chair of the educational administration and policy studies department.

“At just about any school you can think of, there is interest in and even pressure to develop online programs to try to draw additional, new student populations to help finance the overall operation,” Kinser says.

Kinser adds that efficiency is generally a top priority for private, for-profit institutions like RMCAD.

“You want to be able to standardize the educational product so that it can be delivered to as many students as possible at lowest cost,” Kinser says.

With the move to the online model, the cost of tuition at RMCAD -- nearly $22,000 for the academic year -- has decreased by nearly $6,000 since 2012. On average, the school covers 20 percent of a student's fees through scholarships.

RMCAD’s online enrollment has climbed steadily since first offered in 2010, while the number of students on campus has been declining, according to numbers reported by the school.

“Every student who leaves here is going to have to go out and contend with online, and I think it’s irresponsible if we don’t start to innovate around that,” RMCAD Provost and Vice President of academic affairs Kiki Gilderhus says. “Sometimes it’s hard to see the bigger picture because this is still really new, and new things scare people.”

That bigger picture has also led the school to launch programs like commercial photography and fashion design. And school officials say RMCAD is also emphasizing new curricular areas like business and writing skills.

In 2014, RMCAD restructured its academic calendar to align a majority of on-campus courses with the online schedule. Now one term consists of two eight-week sessions, with select classes -- like sculpture -- stretching over a 16-week period.

Artist and educator Philip J. Steele founded RMCAD in Denver in 1963 and the school became renowned for its collegial climate.

Under the Steele family’s leadership, the school set rigorous standards in order to earn various levels of accreditation.

“It was really our desire to take RMCAD from a little mom-and-pop school into a bona fide, top-notch art and design college,” Steve Steele says.

RMCAD is now regionally accredited through the Higher Learning Commission, which accredits degree-granting post-secondary educational institutions like the University of Colorado and the Art Institute of Colorado.  The school is also a member of the National Association of Schools of Art and Design, an organization which accredits the art programs at the University of Denver.

As RMCAD grew, it relocated a number of times. In 2003, RMCAD moved from the three buildings it occupied near Evans Avenue and South Oneida Street to a substantially larger campus in Lakewood that once housed the American Medical Center.

But by 2006, Steele says the historic campus proved to be a financial burden. Furthermore, other members of the Steele family wanted out of the business so the owners started a search for new financial partners.

In 2008, Bill Heavener, Ed Haddock and Jon Phelps – three private investors with ties to a number of for-profit schools including Full Sail University in Florida -- purchased a majority stake in RMCAD. By 2010, the group bought out the Steele family.

RMCAD is attempting to move in step with educational trends with its new systems and approaches.

But the rapid changes have taken a toll on the RMCAD community. Now, full-time faculty teach 10 or more courses a year, depending on class sizes. And those who dedicate more time to online courses don’t receive any extra compensation.

“Once your time starts getting demanded upon at the numbers they were proposing, it felt like: what if I can’t do a good job in the classroom now?” former assistant professor Nikki Pike says.

Pike resigned in December after five years of teaching art foundation courses while also working as a contemporary artist. Pike says after RMCAD increased faculty workloads, she struggled to stay on top of her teaching and, like many at the school, feared becoming a content facilitator rather than an educator.

“Ultimately, we need faculty to teach in the areas that are growing,” RMCAD President Maria Puzziferro says. “But when that’s not possible, we have no choice but to make changes.”

The departures included layoffs and voluntary resignations. Some faculty elected to return in adjunct roles for less pay and no benefits. RMCAD also offered some of the exiting faculty severance packages.

The severance agreements included contractual clauses restricting how openly the exiting employees could speak about their experiences. Many former faculty members declined to comment on the record for this reason.

“It was quite frankly a little exhausting because there was so much going on and a lot of tension too,” Bravo says.

A native of Pueblo, Colo., Bravo considered studying graphic design at a handful of Colorado schools. He says he chose RMCAD because of the passion and prestige of its faculty, many of whom no longer teach there.

The school held forums with students to address concerns but the amount of change proved too overwhelming for some.

Last year, around a quarter of the on-campus students transferred out of RMCAD. While officials insist most left due to financial reasons, plenty were prompted by the big changes, such as Grace McMicken.

In addition to studying at the school, McMicken also held a work study position in the admissions department, where she says she was told to minimize the tension on campus to incoming students.

“I was specifically told that I needed to pretend like everything was OK,” McMicken says. “That was really difficult because in the classroom we were really being taught one thing -- to be the consciousness of society -- and then being silenced.”

McMicken, who came to RMCAD from West Virginia, will continue her education in Seattle at the Cornish College of the Arts.

The changes at RMCAD are reverberating around the Colorado art community like Plus Gallery, a prominent art space in downtown Denver.

“It has been very jarring to hear about professors leaving and just the overall state of the program,” owner Ivar Zeile says. "It’s something that’s reverberated I think really loudly and quickly through the community.”