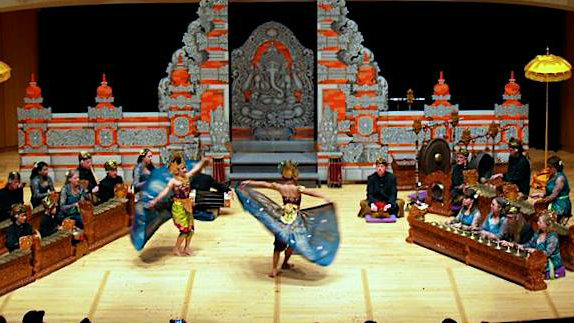 (Photo: Courtesy of Charla Bevan)Gamelan music originates from Indonesia. More than two decades ago, the art form found a home on the opposite side of the world in Denver.

Established in 1988, the Tunas Mekar gamelan ensemble plans to produce a documentary chronicling its first 25 years and exploring the sense of community inherent in gamelan performances.

"Throughout that time, Tunas Mekar has gone through a number of incarnations," Aaron Burris-DeBoskey, who plays the gangsa, a type of metallophone, says. "One of the most amazing things about the group is how widely different the musicans are as people and how this music brought us all together."

Under the direction of Balinese composer I Made Lasmawan, Tunas Mekar plays traditional gamelan music while also incorporating some original, contemporary pieces.

In 1996, Tunas Mekar performed at the 18th annual Bali Arts Festival in the capital city of Denpasar – making it at the time only the second gamelan from the United States to do so.

Members of the orchestra plan to return to Indonesia this summer, residing in mountain villages, studying the musical art form and performing.

"To see gamelan in this cultural and spiritual context is a whole different animal," Burris-DeBoskey says. "The music is not separate from everyday life, the village and the community, as it accompanies every type of ritual and ceremony there is. It's really interesting to see how it’s used in this way compared to how we experience it here more as a performance art.”

In anticipation of the trip, Tunas Mekar will perform at the Oriental Theater in Denver on Thursday, May 15.