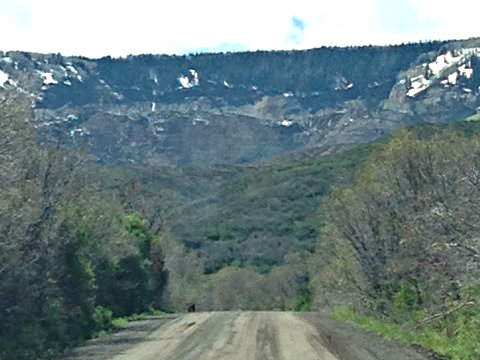 (Photo: Courtesy of the Mesa County Sheriff's Office)Authorities say they’ve found no sign of three people who are feared dead in a huge mudslide on the western slope.

They live in the area and the sheriff says they went with a pickup truck and an ATV to check on irrigation water that had been disrupted before checking an initial slide. They then apparently were caught up in the massive slide. Officials have not seen any evidence of the vehicles either.

An estimated 30-40 search and rescue personnel are on the scene trying to find the three men.

"We're all praying for a miracle," Hilkey said.

The slide happened Sunday in a remote area near the town of Collbran. That’s about 40 miles east of Grand Junction. The sheriff took an aerial tour of the slide Monday morning.

"It’s an understatement to say that it is massive," Sheriff Hilkey said. "It’s at least 2.5 to 3 miles long if not longer and half a mile wide in certain areas, and it’s incredibly deep and full of debris."

Ground crews searched the lower half of the slide while a helicopter and a drone were used on the upper half because that land is still unstable.

[Video from the Mesa County Sheriffs Office, via YouTube]

The sheriff says the search has been difficult because of dangerous conditions.  Much of the hillside is still unstable.

"We saw massive cracks in the hillsides that gives us an enormous amount of concern," Hilkey said. "There’s still a gigantic amount of dirt that looks unstable that could cause a secondary slide to come down on top of the first slide."

Officials report that part of the slide has formed an area where water is collecting.

The sheriff said there were no structures in the area and even though much of the slide was on U.S. Forest Service land, it was not open to hikers.  So it is not likely that others were in the area at the time.

No major roads have been affected, but several gas wells in the area have been shut down as a precaution, and some tanks contain "production water".

When a reporter asked Sheriff Hilkey about clean up, the sheriff responded that there would be no clean up.

"This is what the area looks like now," he said.