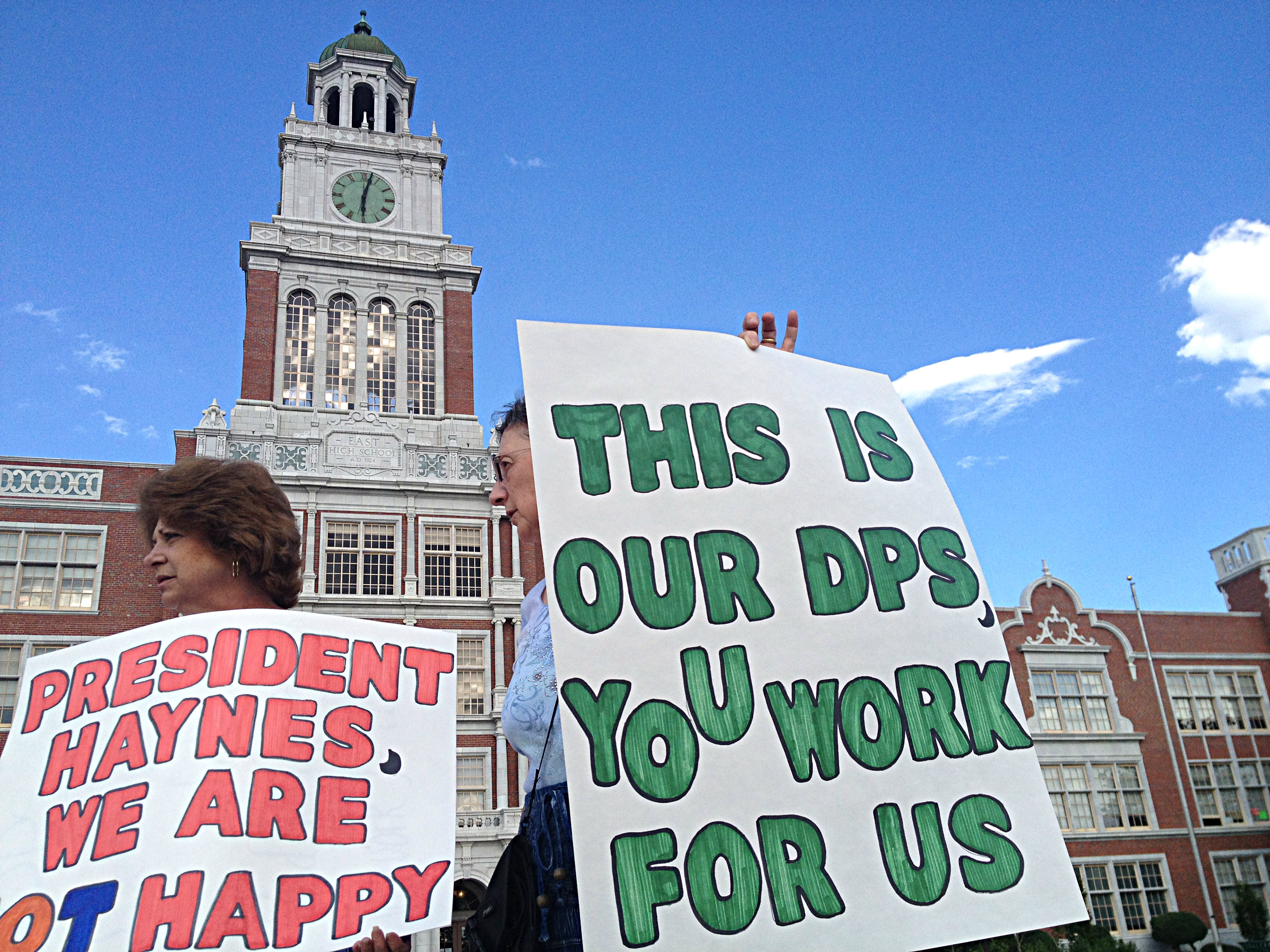 (Photo: CPR/Jenny Brundin)Some parents are threatening to take their children out of Denver Public Schools because they are upset about big changes at three Denver high schools.

Changes to how students qualify for the International Baccalaureate program riled parents of students at George Washington High School. Also, plans to merge ninth grades at Manual High School and East High School have drawn a lot of scrutiny and skepticism from parents.

District officials say, however, that they are trying to make schools less socio-economically segregated.

Ryan Warner: Now we’re going to talk about some big changes in some of Denver’s schools. The details can be very complex. But is there a theme that’s common to all of them?

Jenny Brundin: That is a good question, Ryan. I think it’s fair to say DPS is uncomfortable with the fact that there is a large achievement gap between low-income and more affluent students. DPS administrators have wanted more equity in schools for a while now and have been making drastic changes. They’ve become more focused about that mission now. But they’re doing it at times in a very ham-handed way, sometimes not providing information; other times not presenting what’s happening clearly. That’s making people very angry.

Jenny Brundin: Yes. Parents who thought they were sending their children to East for ninth grade would instead be sending them to Manual for what’s called an East "ninth grade academy," where the two groups of students would take classes together.

Ryan Warner:  So when would this change take place?

Jenny Brundin: Initially, the 2015-16 school year. But late last week, the district decided to push back the proposal by a year. First, Manual High School parents are angry about it. Manual is more than a century old and has played a pivotal role in Denver’s black community – there’s a lot of history and ritual wrapped up with being a Manual “Thunderbolt” and parents want to hang on to that tradition. Second, as word leaked out to East High and middle school parents, an email storm was unleashed on the district. I believe the district also realized belatedly that a massive change like this will take careful time and consideration.

Ryan Warner: And the plans for a ninth grade East High academy? Tell us more about what that would look like.

Jenny Brundin: At a meeting about the plan last night, East Principal Andy Mendelsberg said academically nothing would change for East students. They’d have access to all the same courses they do now. But the plan is to eventually transform Manual from a traditional high school into a career and tech academy that would include two tracks: one for engineering and one for biomedical studies. Ninth-graders would carry on at Manual or could return to East for a more traditional program.

Ryan Warner: So at last night’s meeting, what was the mood? What happened?

Jenny Brundin: It was tense but well-mannered. Mendelsberg was peppered with questions and struggled to explain exactly how it would benefit East students. The East principal said eventually he’d like Manual students to attend East classes. In return, East kids might be able to take a course in 3-D engineering design at Manual. But parents left feeling deprived of all the details that their questions weren’t answered completely. Some were upset that Superintendent Tom Boasberg was not at the meeting, though interim assistant superintendent Greta Martinez attended in his place.

Ryan Warner: So help us understand – how did this proposal come about in the first place?

Jenny Brundin: Some background first: Recently on Colorado Matters, we spoke with reporters from the online education site Chalkbeat who chronicled the years-long upheaval at Manual High School. The school is now in complete disarray, ranking last year as the city’s worst high school. So things are so bad that only 76 ninth-graders are enrolled in the school for the 2014-15 school year.

Ryan Warner: So it looks like that school – because of its low numbers – might not even be able to exist?

Jenny Brundin: Yes. East  is a top-ranked school and is bursting at the seams. The principal said an academy at Manual would reduce overcrowding. Almost half of East’s population is being accepted from outside the school’s boundaries through the school choice process. So a parent made the point that if overcrowding is the issue, why can’t the school just reduce the number of students it takes in from outside. Then neighborhood ninth-graders who would typically walk to East wouldn’t have to take a bus to Manual. This question wasn’t really answered.

Ryan Warner: So there are East’s space issues and Manual’s dwindling enrollment – but is there a larger policy at play here?

Jenny Brundin: It’s clear Manual needs a plan for it to survive. But in an interview with Superintendent Tom Boasberg it’s also clear the plan fits into the district’s larger agenda: to bring about more socio-economic integration and equity to all schools. Here’s Superintendent Boasberg:

"Our students tell us very strongly and our parents too, that they believe very strongly in quality and diversity. And they want to go to schools – elementary, middle, high school – that are very high quality, rigorous, challenging schools and diverse schools that represent our community."

Jenny Brundin: Traditionally, East High School has been tracked with many white, middle-class students in the honors and AP programs. Lower-income students who are oftentimes students of color end up in regular classes. East has made a concerted effort change that. Mendelsberg said that a cooperative program between the two schools could help channel more of Manual’s students into East’s highly ranked programs.

Ryan Warner: So if the proposal is delayed a year, what’s next?

Jenny Brundin: Details were sketchy but a district official said another meeting would be held in the fall and encouraged parents to sign up to be part of the process.

Ryan Warner: Jenny, let’s dip into George Washington – another of Denver’s big high schools. You covered a controversial plan to change a special program that students apply to in eighth grade – it’s a ninth- and 10th-grade program called “pre-IB” and it feeds into the rigorous International Baccalaureate program. The district has decided to do away with how it’s set up now, and in its place, create an expanded honors program that all students can more easily try out for. We got a deluge of listener response to your stories on this issue.

Jenny Brundin: Yes. A couple of weeks ago hundreds of parents showed up at a highly emotional meeting at George Washington High School. DPS promised to answer questions about how the new program would work but that didn’t happen, which further frustrated parents.

Ryan Warner: Parents of IB students are quite angry about this. They say having pre-IB classes that prepare students for the internationally recognized IB diploma is essential. And, they say it’s been very successful in serving highly motivated students.

Jenny Brundin: Some teachers who’ve taught in all of George Washington’s various academic programs worry about combining students. They say there can be big differences between IB and non-IB students in terms of motivation, attendance and things like handing in homework. Many IB parents feel the same way. Shelly Sibelius is the parent of two IB students:

"The reason why my daughter and son both wanted to come to an IB program is they wanted to sit in a program with other highly motivated kids. They don’t want their time wasted with someone sitting with earbuds in his ears and the teacher has spent 15 minutes trying to get him on task."

Ryan Warner: But George Washington is going ahead with this new plan, despite the pushback?

Ryan Warner: So this fall, the school may be grappling with how to teach very high-performing students in the same classes as students who sometimes struggle. How does the district plan to manage this?

"We think we can do that very well without going back to some of the frankly failed tracking programs that we’ve seen in past generations and that requires a lot of thought and a lot of design to see where we’re going to be grouping kids by level, where we’re going to be deliberately heterogeneous, and how we’re going to make sure we both provide supports for our accelerated kids to move ahead in the fastest and most challenging way possible, and to make sure our kids who are behind get caught up."

Ryan Warner:  Boasberg talked about tracking practice failing. What does he mean by that?

Jenny Brundin: What Boasberg means is there remains a massive achievement gap in academic scores between IB students and non-IB students – or even students who are in honors programs versus those who aren’t. Here’s George Washington High school Principal Michael Johnson arguing for the new plan:

"I understand the component of wanting to protect and fight for your child but also we need to look statistically at what is happening to all of our children at George Washington."

Jenny Brundin: The theory is if you have all student start off high school on equal footing, it will raise the bar academically for all students.  And, kids can choose how many honors classes they want to take. Superintendent Boasberg:

"There is not a separation, a rigid separation, from the moment a kid walks in the door.  Are you in one program or not? You are in this school. We are going to encourage folks to take honors courses. But, to be clear, the rigor, content, challenge and nature of those courses will continue exactly as they are today going forward. "

Jenny Brundin: Some parents aren’t buying it and believe these changes spell disaster for the IB program and the school. Boasberg disagrees, saying GW’s IB program will continue to be one of the finest programs in the state. Some teachers say they weren’t consulted about these changes. Boasberg says they were. Parents say they were shut out and still don’t have details on how the revamped program will work. It will start in the 2015-16 school year.