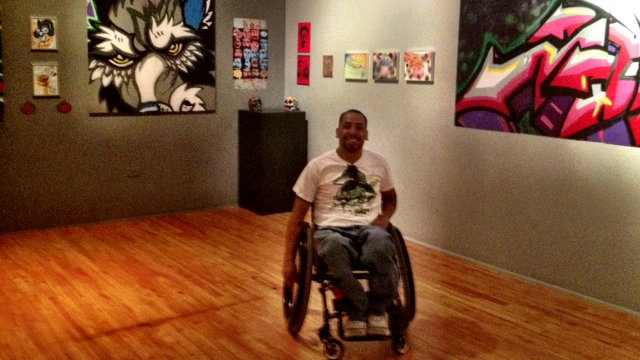 “It just blew my mind,” the 36-year-old Denver street artist says. “I couldn’t believe people could get that much detail with spray paint.”

He soon hit the streets with his own cans, old ones he found in his dad’s garage. They hadn’t been used in years.

Flores, a Colorado native who studied painting at Metropolitan State University of Denver, is one of seven Denver artists whose work is featured in the “Outside in 303” exhibition that runs through September 21, at Museo de las Americas in the Santa Fe Arts District.

CPR caught up with Flores to learn more about his involvement with the show.

CPR: How did you get connected to the Museo de las Americas?

Javier Flores: Josiah Lopez, who is also in the show, asked me to be a part of it. I was honored that they thought of me. I’ve done a lecture here before through my old painting teacher Carlos Fresquez. It was a visiting artist series called “7 Minutos” to talk about my work.

Museo is culturally significant and they’re emphasizing the fine arts to a younger crowd and exposing different forms of art to the masses. I like that they’re willing to take those kinds of risks, and the more kinds you’re exposed to allow you to form an opinion about art.

CPR: Why did you decide to participate in the exhibition “Outside in 303”?

Javier Flores: Artists in general are pretty flaky at times, and graffiti artists tend to be a little ego-centric. Not all the time, but there’s an aura of cockiness. It can be stifling for this museum environment. They’re trying to bring the outside graffiti and urban art to a more mainstream audience of people that come to Museo who expect fine art. It’s a different form of art that gets a bad rap a lot of times. People have negative experiences with it. When people get their private property tagged on, they form an opinion that that’s graffiti art. I like to show people that it’s just another form of expression.

CPR: Street art is meant for the streets; there’s this guerilla aspect, right? So what’s it doing inside a museum or gallery?

Javier Flores: Honestly it doesn’t belong indoors. I think it should be on the side of a building or on a train. At the same time, graffiti art has been happening for a long time. And this now shows people what street art can be and that it can be seen as just art in general. In a museum, you don’t necessarily want to do something that is too racy or provocative unless you’re going for that. I think most people in this show wanted to deal more with the aesthetics of graffiti art as opposed to making a social statement.

Javier Flores: I started working on my pieces for the show last fall. I have seven wood panels of traditional graffiti letters. And then I have two that are a diptych depicting a part of a wolf’s head and another one of a hawk’s head. The title of my show is “Revolutionary Bushido”. It touches on the idea of this lost aspect of Samurai morals – like a code of chivalry, almost – that are also important for not only myself but people in general as a way to conduct ourselves and to carry through with what we say we’re going to do.

CPR: How does Denver’s street art scene compare to others?

Javier Flores:  I’ve been to San Antonio, which has a huge graffiti scene and it’s also influenced highly by the gang culture that’s out there. That kind of permeates into our graffiti culture as well, as far as attitude and the way crews conduct themselves. But I think it’s more pervasive in places like San Antonio where they have bigger gang problems. The crews that are out here do kind of stick to themselves and have their own walls. When they get into altercations with other artists, they end up getting things slashed out or dissed or gone over. And it becomes a back and forth battle. What really takes away from graffiti is when people get caught up in the politics. Because this isn’t about gangs; it’s about art and how we choose to show it. I hear from a lot of people who are amazed at the amount of graffiti that we have here and the caliber of the artists in Denver. It’s really the older generation that is hit or miss. They are usually like “I really love this” or “I hate this, you’re defacing property and this is a crime.”