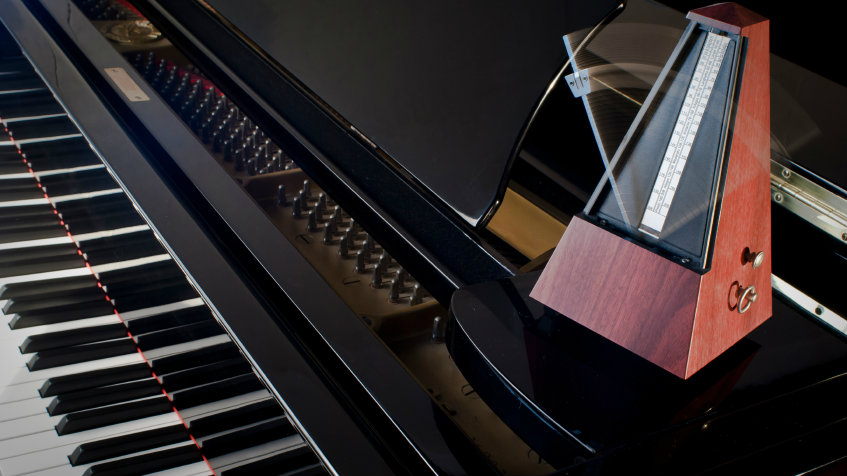 One of the things I love about music is that it is one of the few professions still around that is passed from one generation to the next in a master/apprentice model.

Every classically trained musician spends a great deal of their training in one-on-one lessons with a teacher, and the quality of that relationship and teaching is vital to the success of the student. And it’s a relationship that lasts a lifetime.

But there’s another teacher that most musicians spend far more one-on-one time with: the metronome.

You wouldn’t think of such a simple machine as being a teacher, but that is its very essence. Most good musicians have spent their most frustrating and most victorious moments in the presence of the unwavering click of their metronome.

The idea of a metronome first appeared in the ninth century, thanks to a musician and inventor named Abbas Ibn Firnas.

But it wasn’t until Galileo made his discoveries of the properties of a pendulum that the modern time-keeping device had its roots.

Two more innovations followed over the next few centuries. First, a device called an escapement (also used in grandfather clocks) keeps the pendulum swinging without affecting its motion. Second, the discovery that a double-weighted pendulum (with weight on either side of the fulcrum, or pivot point) could swing at slow speeds – as low as 40 beats per minute.

So in 1814, a Dutch fellow by the name of Dietrich Winkel incorporated those two innovations and invented what we would consider the modern metronome. Finally, the world had a useful tempo-keeping tool for music.

His ideas were quickly patented by the enterprising and underhanded Johann Maelzel (who at least did invent the name “metronome”) in 1815, and the Maelzel metronome is still available today.

As a result, Beethoven was one of the first composers to take advantage of the opportunity to be more specific about tempos in his scores than interpretive words like Allegro ma non troppo or Andante moderato can be.

Exactly how fast is Allegro ma non troppo (Fast but not too much so)? Well, for the opening of his Ninth Symphony, Beethoven specifies playing 88 beats per minute.

This specificity makes for a dilemma for conductors, especially since great performances of Beethoven’s Ninth Symphony can vary so dramatically in tempo. As a conductor, I’ve been in the situation where others have called attention to my deviation from a specified tempo. In the end, though, one must be convinced of the tempo one takes at that moment in those circumstances, long after the metronome is turned off. (More about that moment later.)

The metronome is also extremely personal. It has been a constant companion to musicians since its invention, providing a consistent and accurate tempo for practice.

But its first great value is in teaching students to listen.

The most valuable skill musicians have is the ability to listen and adjust to what is happening around them. Following and interpreting the movements of a conductor, playing and musically communicating with others in an ensemble and constantly adjusting and reacting to the miniscule variations that inevitably happen in performance all come from that ability to listen and to be aware of what is happening outside of one’s own playing.

That starts with a metronome. Students must learn to listen to its beat and adjust to it. It is a discipline, and nothing is more valuable in creating an ensemble player.

(Photo: Public domain)Once a student is able to listen and adjust, the metronome trains young players to internalize that steady tempo. The metronome then becomes a valuable tool in practice, helping to keep the player from speeding up in the easy sections or slowing down in the difficult passages, and for methodically increasing the tempo by a couple beats per minute each run-through when drilling a technically demanding section of music.

I’m a double bassist by training. I remember when I first started working on the bass part for Mozart’s “Marriage of Figaro” Overture, a particularly tricky passage because of the tempo at which it must be played, made far more difficult because of my inexperience at the time.

Over and over again, measure by measure, a little faster each time through, and with the help of a metronome keeping me honest, I learned how to play the passage accurately and fluidly. I still use the same technique with a metronome to this day.

Thus a metronome becomes a musician’s most hated and best loved friend and teacher. Unswerving in accuracy, it never fails to dispassionately tell you when you’re wrong. Out of sync.

Like most things worth accomplishing, it’s never very easy. Oh, how many metronomes lie in unrepairable pieces beneath their final impression on the wall, thrown in frustration by a musician who can’t keep up? Forty-five dollars later, another metronome mechanically measures the time it takes to create an ensemble player.

Eventually though, the metronome must be stopped. Once the rhythms and consistent tempo are mastered, the metronome goes silent and the musician listens to the heart.

Music has to breathe and be human, not mechanical. When you walk, you constantly make tiny adjustments and changes in your stride. Your heart never beats mechanically like a metronome.

And people are never perfect. We can be really, really good, but never like a machine if we want to truly express emotion in our music.

After all, the student must eventually leave the mentor behind, having internalized all the master had to teach.