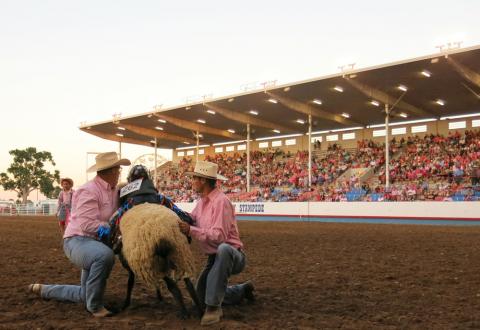 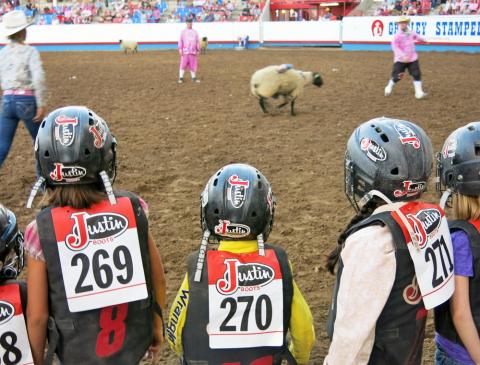 Luke Runyon / Harvest Public Media & KUNC Mutton busters look on as a participant loses his grip on the sheep. 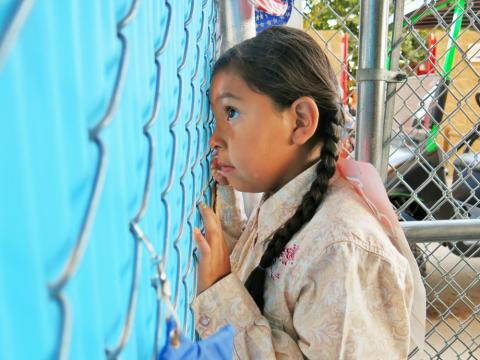 Luke Runyon / Harvest Public Media & KUNC Navaeha Salgado, 6, peers through a fence at the Greeley Stampede to scope out the sheep she'll soon be latching onto and riding around the arena. 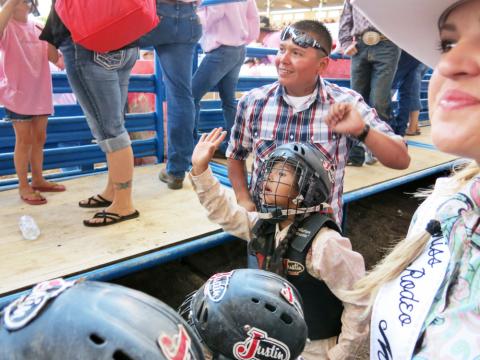 Luke Runyon / Harvest Public Media & KUNC Contestant Navaeha Salgado waves to her mother in the stands while her father, Dominic Salgado, looks on. The children who participate in mutton busting are required to wear a protective vest and helmet, and parents sign waivers.

A furry beast, a brave rider and a roaring crowd make up the list of ingredients for the Western rodeo tradition known as “mutton busting.” Think of it as bull-riding, but for 6-year-olds, and the furry beast is actually a wooly sheep.

Mutton busting has its roots in Colorado, where it was first introduced in the 1980s at the National Western Stock Show in Denver. The crowd-pleaser is now a favorite at many rodeos and county fairs across the Midwest and Great Plains.

For first-timers, the prospect of hopping on the back of a sheep for a wild ride can stir a range of emotions. Though no tears were shed on a June evening at the Greeley Stampede in Greeley, Colo. Instead, children buzzed with a mix of excitement and nervousness. Participants are usually between the ages of 5 and 7, old enough to hold their own and still light enough to make for a fair match up with the sheep.

Navaeha Salgado, 6, made the 2014 Greeley Stampede mutton busting her first foray into the rodeo event. On a warm evening she was one of a dozen participants clinging to their parent’s legs, most dressed in cowboy hats, denim and western style shirts.

“She’s very independent. She always says, ‘Mom, I can do it myself,’” said Dashia Salgado, Navaeha’s mother. “And when it comes to animals, she loves animals. So this is something that’s a good experience for her.”

To get ready for the main event, the Salgados practiced. Dominic Salgado, Navaeha’s father, did his best sheep impression, had his daughter climb on his back and then galloped on all fours through the house.

“Last night we practiced before I went to bed,” Navaeha said. “I fell off and then I got back on and I hanged on tight around his neck.”

Waiting for their turn to prove their mutton busting chops, the children stand in a line in the arena. They stand wide-eyed, glancing up to their parents in the stands, looking nervous and excited. One by one two cowboys lift the children up and onto the back of a sheep.

The riders are judged for how long they hold on and for style. On this night, Navaeha’s 88 points was a high score, enough to put her in second place. Zadie Stack, 7, of Palo Alto, Calif., took the first spot.

A mouthful of dirt, a couple fistfuls of wool and a shiny belt buckle are Navaeha’s prizes. And because she’s only 6-years-old, Navaeha said she plans to be back next year for another try at first place.

Harvest Public Media reports on farm and food issues and is a collaboration of KUNC and other public media stations in the Midwest.