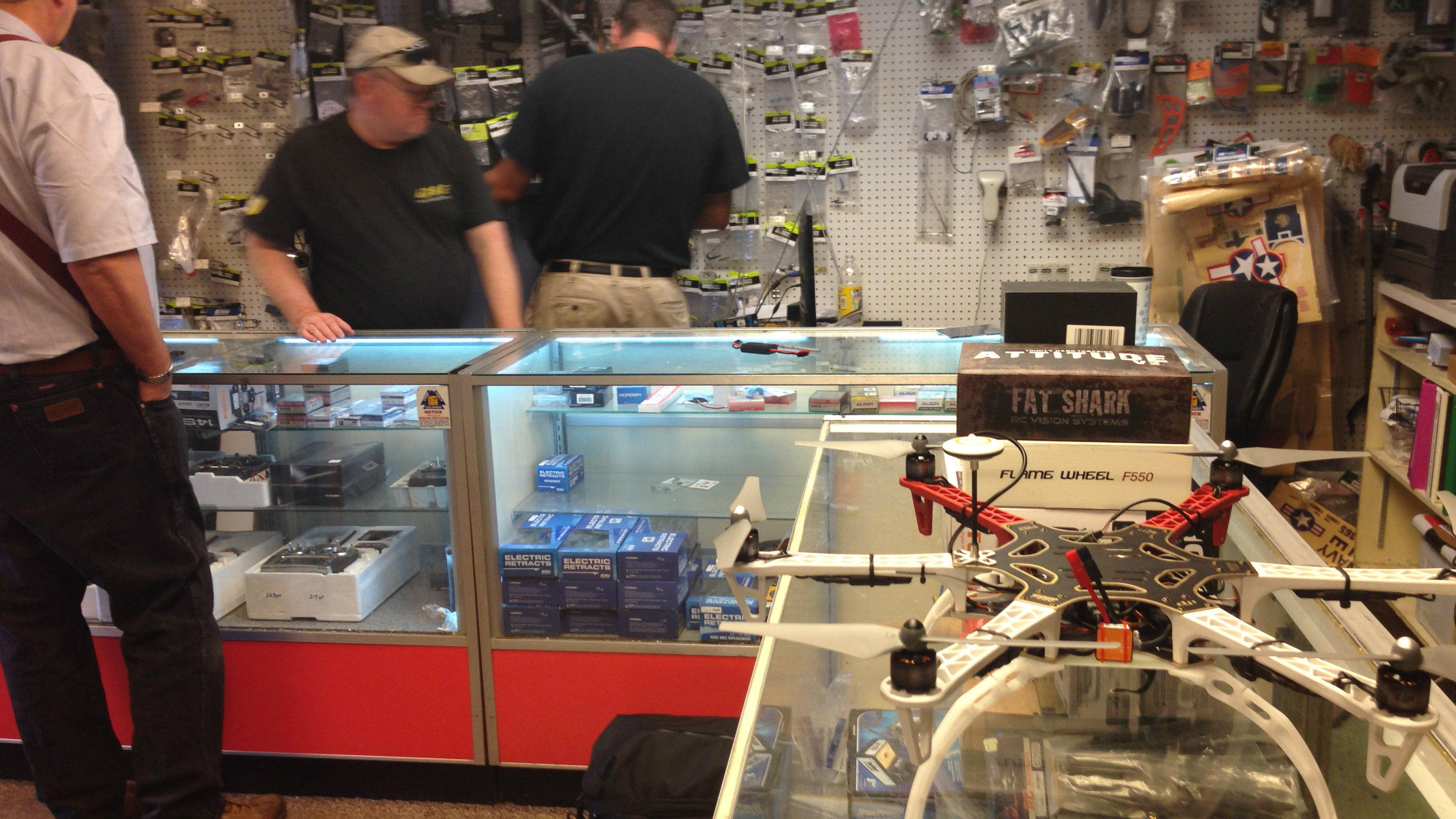 (Photo: CPR/Corey H. Jones)The first unmanned aircraft system authorized by the Federal Aviation Administration (FAA) for commercial use above U.S. soil soared over an oil field in Alaska in June.

Now other industries, from agriculture to entertainment, hope to get the green light to send drones into the sky.

This includes Colorado filmmakers like Colin Floom, who says the technology is changing what filmmakers can do.

“Drones are definitely replacing some really expensive equipment that we used to have to bring in,” Floom says. “This saves a lot of time and money to be able to fly these drones instead of setting up a big crane or using a helicopter.”

And the technology is rapidly evolving.

“They are more stable, more precise and better,” Brad Weissenfels, who owns the Action Hobbies RC Aircraft Center in Lakewood, says. “They are always getting a little bit better than previous versions.”

The store sells drones fit for carrying cameras that range in price from under $500 to more than $15,000.

Floom says he has invested thousands of dollars into his own equipment, which he never flies near crowds, power lines or cars in order to avoid accidents.

And like many, he continues to monitor the FAA’s progress on establishing drone regulations.

“It definitely affects how I can film, where I can film, if I can charge for the aerials or not,” Floom says. “There are some loopholes and ways to get around it, but I really do think it is in the FAA’s best interest to be able to make it legal for commercial flying.”

According to an FAA notice:

Users are advised to avoid noise sensitive areas such as parks, schools, hospitals, and churches. Hobbyists are advised not to fly in the vicinity of spectators until they are confident that the model aircraft has been flight tested and proven airworthy.

The FAA is still working to establish regulations around commercial use.

While the agency declined to comment for this story, it maintains in statements that commercial drone flight still requires a certified aircraft, a licensed pilot and operating approval.

“The process will take input from other sources, other agencies, other minds,” New York-based entertainment and media lawyer John J. Tormey III says. “It will need to be a collaborative solution.”

Tormey says the FAA has to weigh priorities like national security, personal safety and privacy. So it could be a while before drone regulations shift.

In March, a federal judge dismissed an FAA fine of $10,000 against a man who flew a drone without a permit near the University of Virginia to make a commercial video in 2011.

Many take this to mean that the law is fluid.

But Tormey says it’s not clear what this means for filmmakers who proceed with flying drones for profit.

“It’s not open season necessarily," Tormey says. "There has to be a reality check for people that fly drones for commercial purposes."

CPR spoke with several Colorado film and TV production companies that confirmed using drones, but would not say so publicly because of the grey area currently surrounding commercial drone regulations.

The ease of capturing landscape views is one reason.

“I think that the open space is the key to the use of drones,” Zuckerman says. “We don’t have the traffic problem that other places have.”

Colorado commonly attracts films in the $3 million to $5 million range, according to Zuckerman. These projects stand to gain the most from drones, since renting a helicopter often falls outside of their budgets.

“It’s important for us to keep up technologically, and use the best technology we have available to create movies and television,” Zuckerman says.

Roshambo Films director Jim Elkin has rented drones for film shoots in the past.

“It’s a great tool to have in your tool box,” Elkin says. “But if you’re a plumber, you also need more than just a hammer or a screwdriver.”

Elkin does not own a drone. That’s partly because operating one properly requires a specific skill set, he says.

“It’s one thing to buy one," Elkin says. "But it’s a whole other thing to be a pilot with the expertise."