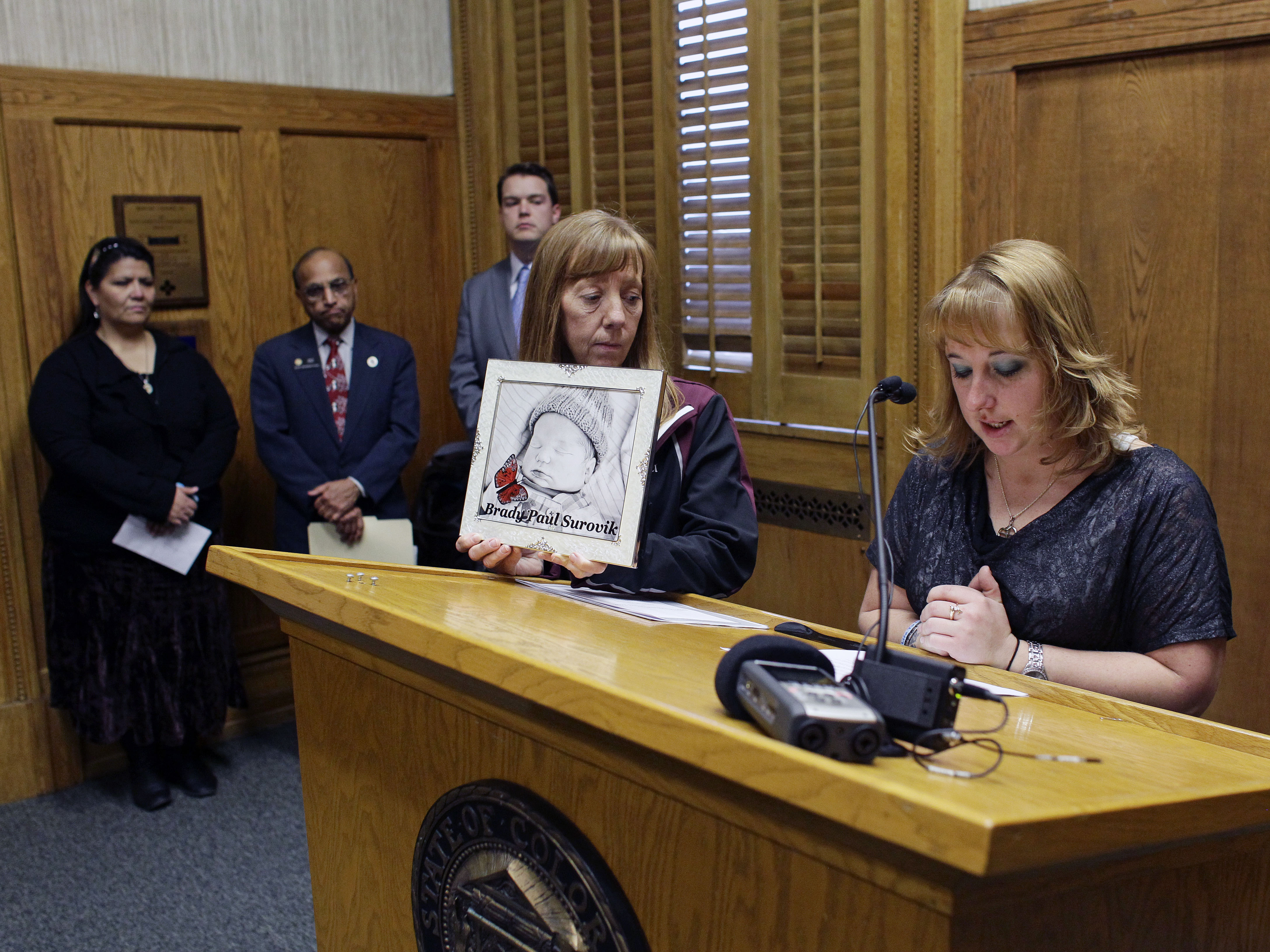 What’s in a nickname?

Both supporters and opponents of Amendment 67 call the measure on this year’s ballot “personhood.” But they disagree sharply on what it actually does.

Reproductive rights groups argue A67 falls right in line with 2008 and 2010’s failed personhood measures, which were designed to ban abortion by extending legal rights to life from the moment of conception.

But backers say that while their measure does recognize every stage of a pregnancy as a legal person, its scope is far more restricted than in past years, and won’t affect abortion or any other medical procedures.

The measure is explicitly limited to the Colorado Criminal Code and Colorado Wrongful Death Act, where “the words 'person' and 'child' … must include unborn human beings.”

“When a pregnant woman is killed, [Amendment 67] will essentially allow for two homicide charges, one for the mom, one for the baby,” says Susan Sutherland with the Yes on 67 campaign.

No charges for fetal death

The human face of A67 is Longmont resident, Heather Surovik. Surovik was more than eight months pregnant with a son she’d named Brady when her car was hit by a drunk driver in July of 2012. She survived, but the fetus did not.

The driver, Gary Sheats, was charged with vehicular assault, but at the time Colorado law didn’t allow for any extra charges in the death of the fetus.

“On top of dealing with the death of my son, I find out that the man responsible for taking Brady… was not being charged with it, because the law says that Brady was not a person,” Surovik says in a video for the 67 campaign, which calls itself A Voice for Brady.

In response to public outcry, state lawmakers passed the Crimes Against Pregnant Women Act. The 2013 law created a new class of assault charges when a perpetrator unlawfully terminates a woman’s pregnancy. But it doesn’t describe the crime as homicide because Democrats were worried that could be a slippery slope toward granting rights to fetuses and embryos.

For supporters of Amendment 67, that law falls woefully short.

“It has to be … homicide,” said Brenda Rastrelli as she participated in a small pro-67 demonstration in Denver earlier this year. “This was a baby, this was a person. As much any human being walking around, these babies should have the same right. And they have nobody to speak up for them except us.” 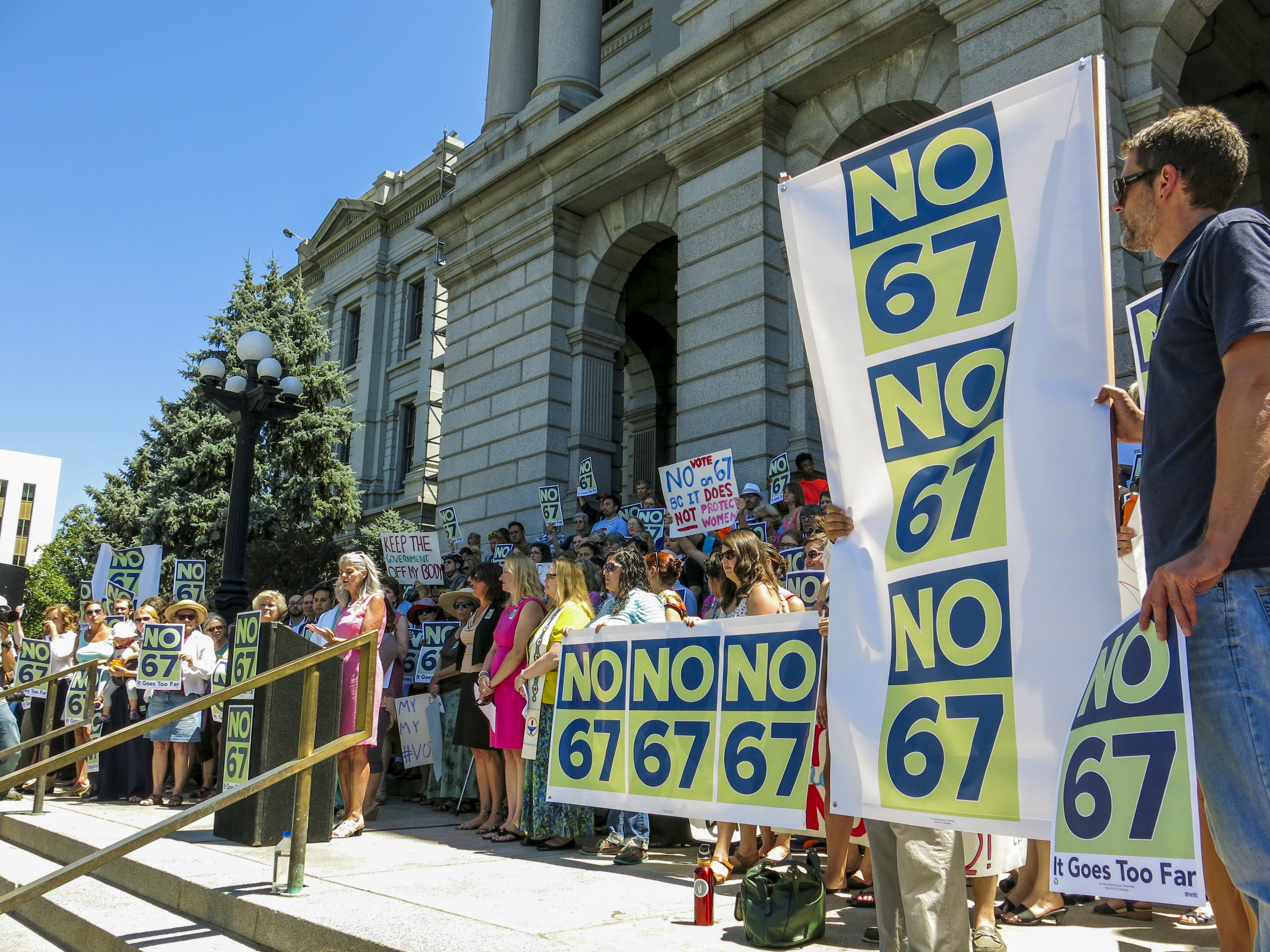 They say if Amendment 67 becomes law, any medical procedure that ends a pregnancy or destroys a fertilized egg, would be considered homicide. Those procedures could include abortions, some forms of birth control, and in vitro fertilization as it’s currently practiced.

“Amendment 67 is written in language that tries to trick us,” Christina Aguilar, head of the Colorado Organization for Latina Opportunity and Reproductive Rights, told the audience at a No on 67 rally in July at the state Capitol. “It would criminalize women and outlaw all abortion.”

At least one of the groups supporting Amendment 67 seems to agree with that interpretation. On a webpage of talking points about the measure, Colorado Right to Life states that “the Brady Amendment 67 makes abortion a criminal offense.”

For some opponents, the measure goes beyond medical matters to fundamentally degrade women’s rights.

The national group Advocates for Pregnant Women has identified hundreds of cases in recent decades where pregnant women were arrested or confined for everything from substance abuse to refusing to have a caesarian section. Many of those cases relied on laws very different from Amendment 67, but the group’s director, Lynn Paltrow, says measure would set a bad legal precendent.

“As soon as you empower state actors and others, including physicians and husbands, to act as if the fertilized egg, embryo, or fetus is already outside of the woman’s body, they can do almost anything they want to her,” says Paltrow.

A question of enforcement

So what would the real world effect of Amendment 67 be?

Mississippi College Law School professor Jonathan Will, who's studied personhood efforts nationally, says it all depends on how it’s enforced.

As Will sees it, Amendment 67 as written does make abortion a homicide. But that violates the constitutional protection of abortion rights guaranteed by Roe vs.Wade. So any prosecutor who tried to use the law to keep a doctor from performing abortions would be setting themselves up for a very lengthy legal battle.

According to the National Conference of State Legislatures, at least 38 states already have some sort of fetal homicide law. But unlike Amendment 67, many of those laws explicitly exempt abortion.

Because A67 lacks any exception for abortion, its passage would mean that if the US Supreme Court ever reversed its decision in Roe-versus-Wade, Colorado would automatically have an abortion ban in place in the state constitution.

Will believes both sides in the Amendment 67 debate are being somewhat disingenuous in their arguments: supporters for saying the measure has nothing to do with abortion, and opponents for suggesting it would immediately ban the procedure. The legal reality, he says, is likely to be much more ambiguous.