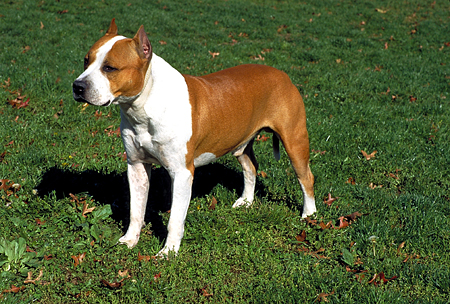 Photo: Courtesy AKC/Mary BloomAurora voters will decide on Election Day whether to keep a nine-year-old ban on owning pit bulls in their city.

“People are pretty polarized on this,” says Dr. Rhea Dodd, a veterinarian who believes the ban should be repealed. “I think people are afraid. Pits can be big strong dogs.”

'Any dog can bite'

Like many ban opponents, Dodd believes that fear is misplaced. “There’s no evidence that pit bulls are more aggressive than any other breed,” she says. “Any dog can bite.”

She points to a five-year study showing that the breed most responsible for dog bites in Colorado was the Labrador Retriever, which accounted for 11 percent of all dog bites. Pit bulls were second with 9 percent, and German Shepherds were third with almost 8 percent.

That’s one reason Aurora City Councilman Bob LeGare believes it’s unfair to single out pit bulls. “I do agree that pit bulls are at the top of the list, but there are other dogs that are at the top of this list and no one’s even discussing those dogs,” he says.  LeGare recently changed his position to oppose the ban.

There is no way to calculate the rate of bites per breed because the total number of each breed in Colorado is unknown. That’s according to the study, which was conducted by a coalition that includes the Colorado Veterinary Medical Association and the Colorado Association of Animal Control Officers.

Ban opponents also object that any dog can be misidentified as a “pit bull” based solely on its looks.  The Aurora ban prohibits the ownership of three breeds commonly called pit bulls: the American pit bull terrier, the American Staffordshire terrier, and the Staffordshire bull terrier. If a dog has physical characteristics that “substantially conform” to one of these breeds, it can be considered a pit bull and banned from the city. Dogs in the shelter may be put down.

But according to the American Veterinary Medical Association, even trained animal shelter staff can make errors in identifying dogs as pit bulls, pointing to a Florida study that asked shelter staff to identify the pit bulls from a group of 120 dogs.  Participants labeled 55 dogs as pit bulls, when only 25 were determined by DNA analysis to actually belong to a pit bull breed.

“If it looks like a pit bull, it can be euthanized. I think it’s unfair,” says Dodd. “They’re taking the lives of dogs that have never done anything wrong. It’s not only inhumane, it’s a waste of money.”

Aurora does allow an owner to appeal a pit bull determination with DNA testing. If the DNA test shows the animal is genetically less than 50% of one of the banned breeds, the owner may keep it legally.

Aurora’s Animal Care Division believes the ban is effective and supports upholding it.

“There hasn’t been a serious attack from these types of dogs in Aurora within the last several years,” according to a memo from the city’s Animal Control Division to the Public Safety Policy Committee.  At the time the ban was enacted in 2005, there were a series of attacks by pit bulls, including one on a 10-year-old boy whose arm had to be amputated.

Animal Care also expressed concern that if the ban is repealed, significant numbers of pit bulls will be moved into Aurora from neighboring cities that continue to ban the dogs. Denver, Castle Rock, Commerce City, Fort Lupton, La Junta, Lone Tree, and Louisville all have pit bull bans. Pit bulls are also prohibited on U.S. Air Force and Army bases.

The Aurora City Council decided to send the pit bull ban to voters after considering the issue multiple times in committees and council meetings over the course of 2014.

“It kept coming up in City Council meetings,” explains Rachel Sapin, who has covered the Council’s consideration of the ban for the Aurora Sentinel. “They are feeling the heat and spending an inordinate amount of time on the issue.”

In March, the Council considered a proposal to replace the ban with a vicious dog ordinance and a requirement that pit bull owners carry liability insurance.  When that measure failed, the Council voted in June to put the question to voters.

Councilman LeGare is looking for a resolution to the discussion for some time. “Taking it to the voters basically lets the voters say yes or no," LeGare says. "And probably for the next 10 or 20 years, elected officials can say, 'we're not going to address that issue.' ”

That suits Colleen Lynn, founder of DogsBite.org, an advocacy group which supports restrictions on pit bulls. “We’d like to see more city councils putting it on the ballot,” she says. “Our theory is that the majority of  Americans don’t want to live next door to a pit bull."