With Halloween days away, pumpkins, skeletons and fake cobwebs are plentiful in Arvada's Memorial Park neighborhood. But the decorations that scare Rudy Zitti are all the new ‘No Soliciting’ signs.

Zitti, a staffer with the conservative group Americans for Prosperity, is one of the reasons those signs are there. He and scores of other campaign workers from across the political spectrum have been knocking on doors here, urging people to vote, every day since ballots arrived in residents’ mailboxes earlier this month.

No sooner has Zitti wrapped up his rounds, delivering door hangers with Uncle Sam on them to a few solicitor-friendly homes, than the next canvasser arrives, this time from Democratic Sen. Mark Udall's campaign.

Neighborhoods like this one in politically divided Jefferson County are the front line in the massive ground game being played by political parties, candidate campaigns, and independent groups. All hope to turn out enough of their supporters to claim victory next Tuesday.

According to Palacio, Democratic volunteers and staffers knocked on around 150,000 different doors across the state in the past week, part of a get out the vote campaign that dwarfs the party’s past efforts.

With the state’s top races still locked in a dead heat, all sides agree the ground game could be the X factor in this election.

Political analysts predict the U.S. Senate and gubernatorial races will come down to a margin of just one or two points.

“That’s turnout-able,” says longtime Colorado pollster Floyd Ciruli. “That’s a number you can manage by getting a few extra votes per precinct.”

But those few extra voters may need some nudging to make sure their ballots end up in the mail, not the trash.

Making the best of a tough year

For Democrats, a strong get out the vote effort may be their only hope of counteracting this year’s tough political environment.

Turnout for midterm elections is generally much lower than in presidential years, and the people who are less likely to participate – younger voters and minorities – are a big part of the Democratic base. This year in particular, polls indicate Democrats are less enthusiastic about the election than Republicans. 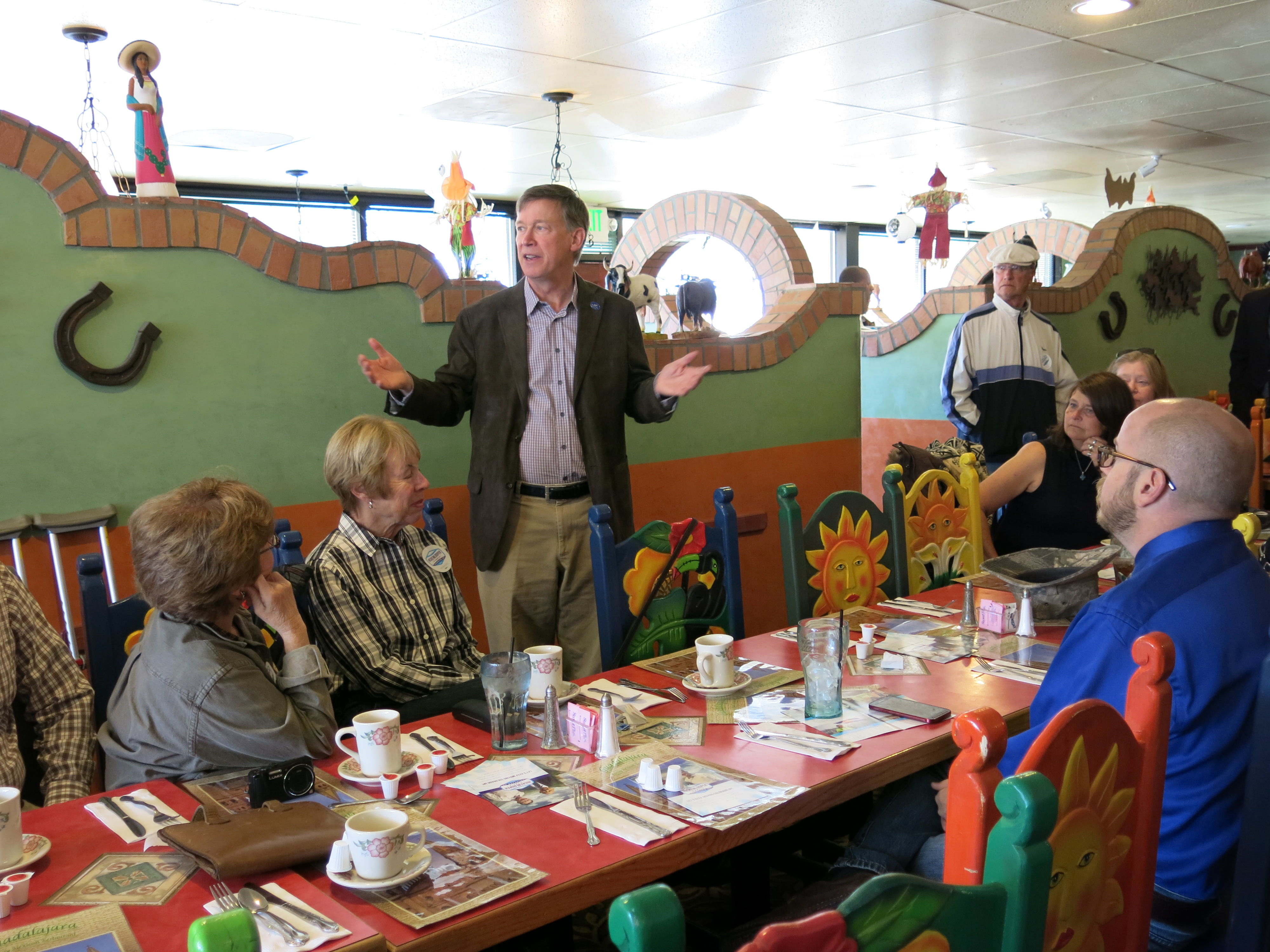 (Photo: CPR/Megan Verlee)But Democrats have history on their side. Four years ago Michael Bennet’s U.S. Senate campaign revolutionized the ground game. That was another Republican wave year, but Bennet used data mining and a massive voter-contact effort to boost turn-out. After Bennet eked out a win, his strategy went national and is being used in 10 other battleground states this year.

In Colorado candidates are building on Bennet’s get out the vote framework and hoping to expand it.

“Field is what Democrats in Colorado do best,” says Palacio. “We want to make sure that we’re doing it better in 2014 than we’ve ever done it before.”

A high-tech update to traditional tactics

For their part, Colorado Republicans agree their party lost the turnout war in recent elections. But they say things are different this time around.

“I think Republicans for many years here in Colorado got a bit complacent,” says party chairman Ryan Call. “We had for decades a significant voter registration advantage, Republicans over Democrats, and so you didn’t have to work as hard as you do now.” 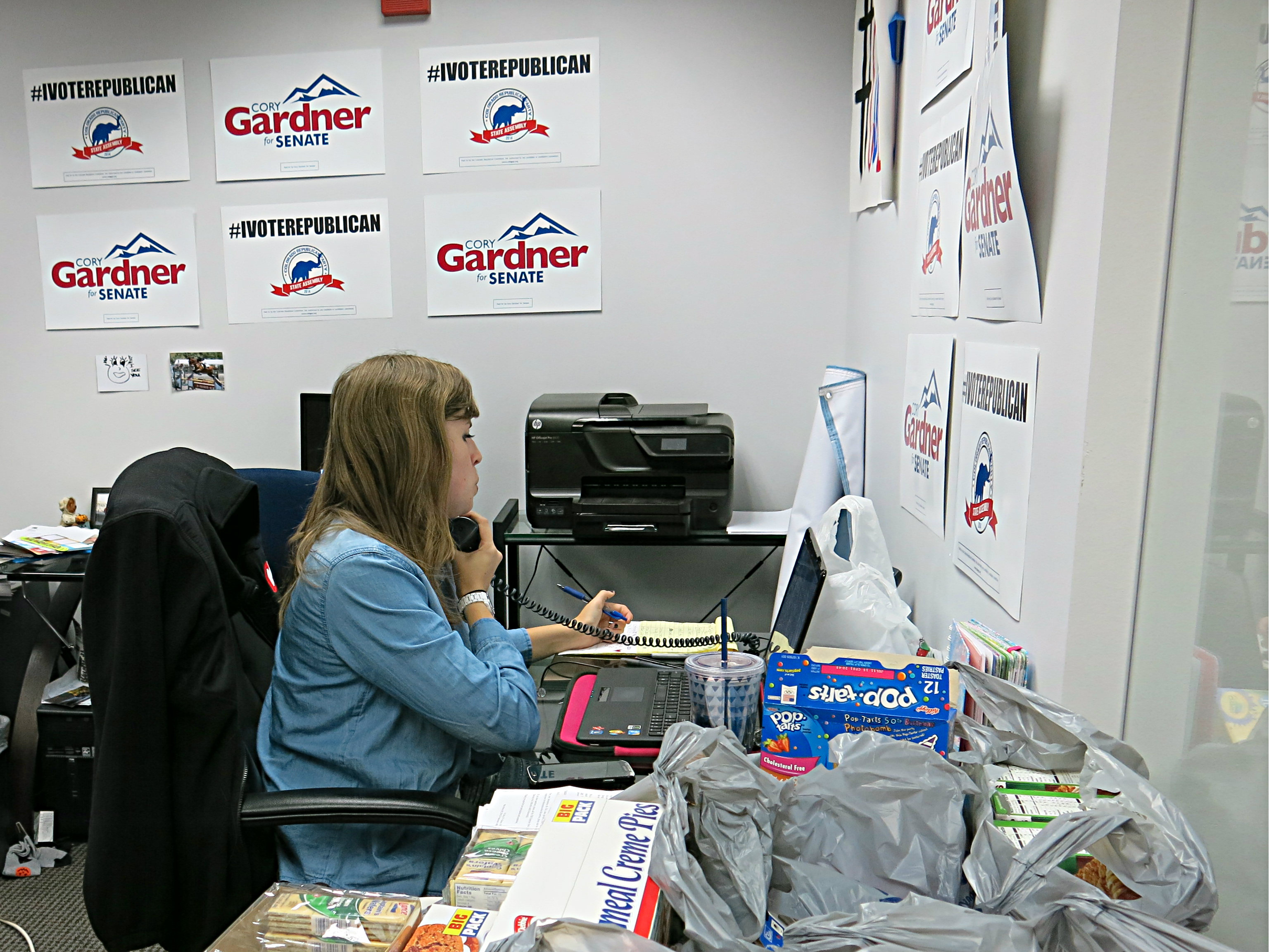 The tools used to turn voters out have gone high-tech: Possible supporters are logged in databases and tracked by field workers wielding tablets with specialized apps. But Call says all this focus on the ground game actually marks a return to old fashioned campaigning, with its focus on person-to-person contact.

“In order to cut through all the noise people are hearing in television and radio and even in the online space, you do have to connect directly with the voter,” says Call. “In many ways it is a bit of a ‘Back to the Future.’”

As the parties scramble for the few extra votes they hope will lead them to victory, they face one big wild card: Colorado’s new election law.

This is the first general election when every registered voter got a mail-in ballot, no matter how long it’s been since they voted. No one seems quite sure what that will mean for turnout, but it does greatly expand the potential voter pool.

“All of those people are getting a ballot, and they’re on lists, and that list is accessible to the parties,” says pollster Ciruli.

And parties aren’t the only ones playing the ground game. More than a dozen independent groups from across the political spectrum have get out the vote efforts going in Colorado right now, and many say this year’s effort is their biggest ever.

Some plan on staying.

Dustin Zvonek, head of the Colorado chapter of Americans for Prosperity, says the organization intends to keep all 35 of its in-state staff on the payroll after Election Day. In part that will give the group more of a voice in state policy debates, but the goal is also to keep volunteer networks strong for future elections.

“For us, the ID work and the persuasion work is really a year-round effort, not an every-two-year-cycle effort,” says Zvonek.

Get out the vote efforts use a lot of different strategies to nudge people to vote. They try to appeal to a sense of civic duty, leverage social, and provide practical information on how to vote.

But as he trudges from door to door in Arvada, AFP staffer Zitti has possibly the most compelling pitch of all for an election-weary public.

“You want the phone calls to stop, the mail to stop, and the door knocks? Best way to do that is to mail it in.”

With control of the U.S. Senate and the Colorado statehouse potentially hanging in the balance, voters who do procrastinate are likely to find Zitti, or others like him, ringing their doorbells all the way to Election Day.