More than 5,000 Colorado 12th graders have refused to take the new state-mandated science and social studies tests as student anxiety about over-testing grows.

Hundreds of high schools students in Boulder staged a mass walk out Thursday and Friday, refusing to take their 12th grade social studies and science tests.

Fairview High School students say they want to send a clear message that when it comes to testing, enough is enough.

The new state tests – the Colorado Measures of Academic Success, or CMAS - are supposed to measure how much students have learned in science and social studies since 9th grade. It’s the first time the tests are being given to upperclassmen in high school and they say the new exams won’t impact their future.

A group of students released this video late last week outlining their complaints:

Students protested outside Fairview High School in zero degree temperatures holding signs that read, “education not standardization.” They took turns standing outside, collecting non-perishable food items for a food bank. Inside, dozens of students were busy writing letters to state lawmakers expressing why they chose to skip the tests.

Students complain the new tests don't reflect what they’ve learned in school. Fairview Senior Jennifer Jun says some of the material was taught years earlier, or not at all.

"For them to be testing us on things that we never learned about just doesn’t make sense to us," Jun says.

Senior Chaya Wurman says students also worry that part of a teacher and school's evaluation could eventually be tied to the results of tests. 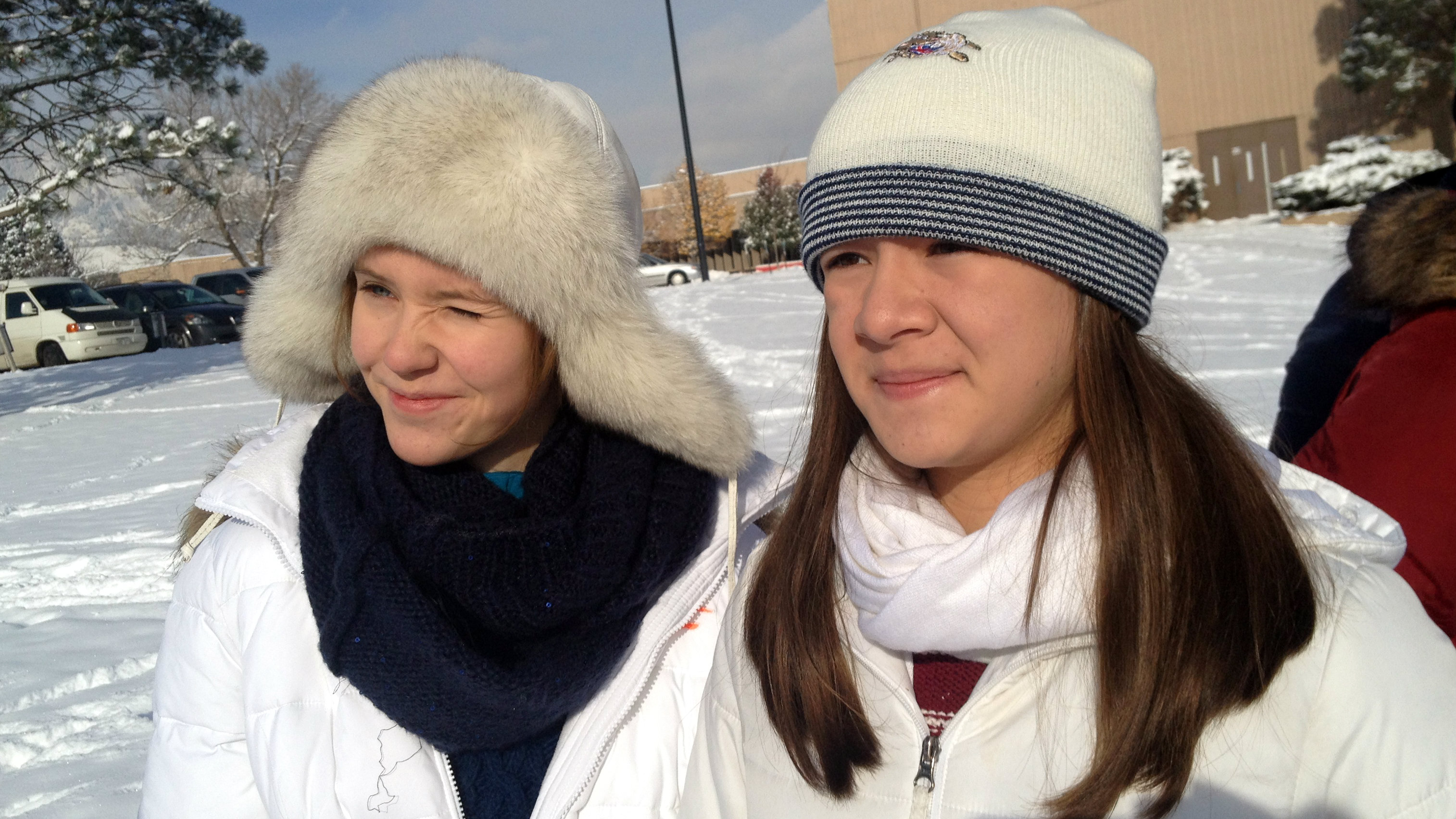 District officials told students if they opt out with parents’ permission, it’s considered an excused absence. If they don’t show up, it’s counted as unexcused.

“We understand they are exercising their rights on this and their feelings about it -- both them and their parents,” says Boulder Valley Superintendent Bruce Messinger. “If their parents have signed an opt-out form and we respect that and we’ll go forward.”

Messinger says he’s not a huge supporter of broad-based state assessments across all grade levels and all content areas. He says there probably does need to be a social studies test at some point in high school, but not in 12th grade.

Despite discussion in local school board meetings and the media, “I’m not sure 12thgraders knew this was coming until it happened this fall,” she says. Zurkowski adds the department could have done a more effective job communicating to students why law requires them to take the tests.

Given that 11th graders take many tests, including the college entrance exam the SAT, districts, surveyed two years ago, decided to administer the science and social studies tests in 12th grade.

Zurkowski acknowledges this first group of 12th graders won’t get the results until after they graduate, but the information she says will help the state and their district and school.

“Districts will be able to utilize that information and make adjustments as they deem appropriate for the students who come next,” she says.

In Douglas County, the school district provided this chart showing preliminary test completion rates for many of its high schools. They range from a high of 83 percent at D.C. Oakes to 27 percent at ThunderRidge.

After administering the test to his 12th graders, Tony Hughes, a teacher at McLain Community High School in Jefferson County, told the school board last Thursday night  many of his students took the 70-minute test in five to 10 minutes.

“I’m sure this will reflect poorly on me and McLain, but truly the students have no buy in,” he said. “Students are fairly resentful of the test, they feel like they’ve been over tested. They’re very keen on the fact that they are not accountable for the scores so they don’t have a buy-in. Their question is 'what does this test matter for me?' ” 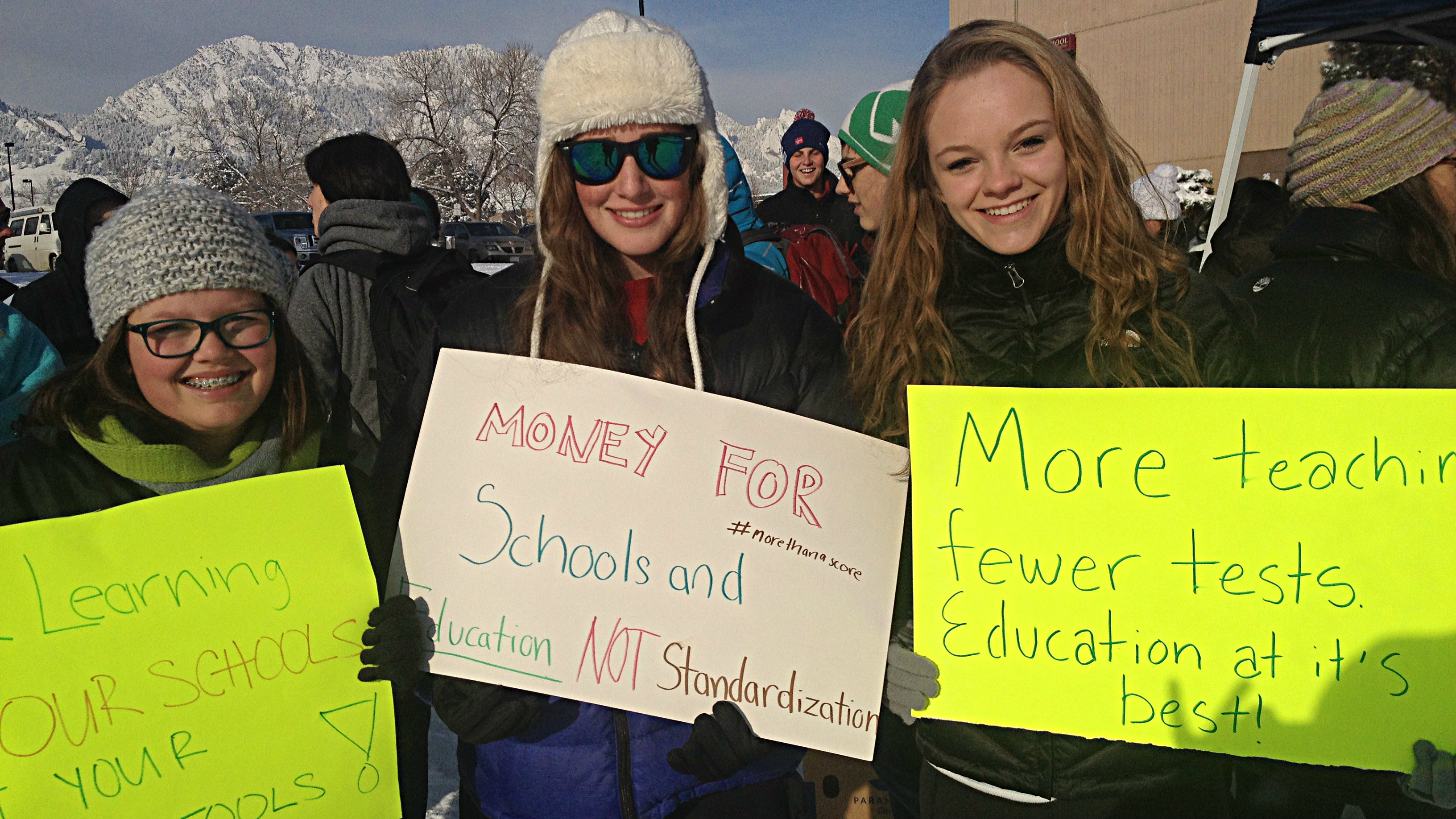 (Photo: CPR/Jenny Brundin)Others have concerns that testing impacts 9th, 10th, and 11th graders. The lower classmen were off on Thursday and Friday at Boulder Valley's four largest schools — Boulder, Broomfield, Fairview and Monarch high schools — to accommodate the senior tests. That’s about 5,700 students.

Cherry Creek High School was scheduled to test seniors on Thursday and Friday with no school for freshman, sophomores, and juniors.

One unknown is the impact of Thursday’s walkout. Schools are supposed to show a 95-percent test participation rate. If they don’t reach that in two content areas, the school’s rating is supposed to drop a level.

The school and district can contest that if they show a good faith effort was made to inform students and parents about the test.

“We’ll clearly demonstrate that we created the opportunity," says Boulder Valley Schools superintendent Bruce Messinger. "If students opt out or their parents opt out ... it is what it is.”

Zurkowski, with the state education department, says down the road, local school boards may decide to use the test as a graduation standard to show the student has mastered the subject, instead of requiring a certain number of courses. Colleges have indicated that, in the future, they may use scores to allow students into credit-bearing courses so they won’t be required to take remedial classes.

Legislation also allows flexibility for when science and social studies tests can be administered in high school assessment.

“There was an effort to hit the right balance," Zurkowski says. "I’m not sure we did and until we have the conversations afterwards I don’t know long term where these two assessments will be."