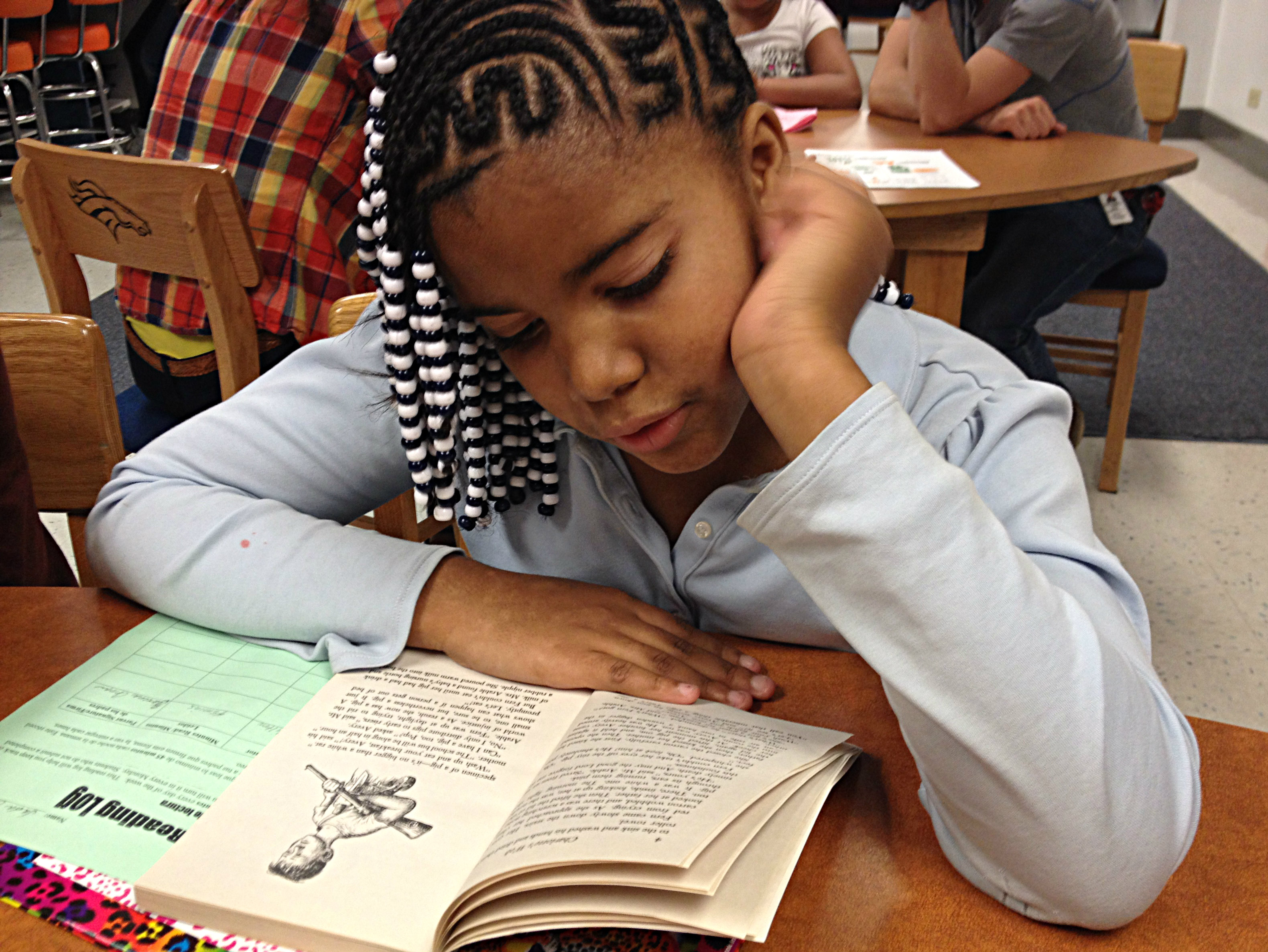 (Jenny Brundin/CPR News)For children in Colorado who don’t know where they’ll rest their heads at night, life is stressful. They worry about moving, wonder how to help their families and dream about a different future.

“I feel like I don’t want to get attached to anybody,” says 9-year-old Gada Cowan.

Gada lives at The Crossing in north Denver. It’s a program of the Denver Rescue Mission where families find shelter, mentoring and life skills training. The goal is to move from homelessness to self-sufficiency.

Gada is one of three children CPR News interviewed about their hopes and worries as part of our ongoing coverage about kids growing up in poverty in Colorado.

The stress of moving

Before Gada landed at The Crossing, she’d lived for a while in her great-grandma’s basement. Chicago was too violent to go outside so the family moved to North Carolina and then here.

At her old school, Gada says she didn’t have too many friends and now she says she doesn’t understand why girls like her one day, and drop her the next.

10-year-old Nakisha Johnson – everyone calls her Pinky – was at a shelter before this for several weeks and before that, at her grandpa’s house.

“It’s just weird,” she said. “Because it’s like we just stay a place for a few months or weeks and then we just move to a new place.”

“I always think that we’re going to move somewhere that’s just not right for me,” she said. “What I worry about the most is sometimes I worry that people don’t actually like me.”

James Rodriguez, 9, said he doesn’t like moving because “we only stay there for about five days,” he said.

And there’s another reason: “Maybe because some are bullying me or something? Might be because I’m smart?”

Trying to have fun

“Sometimes I have to take a minute inside my room and start crying and then when I stop crying, I get up and I go outside and have fun,” Gada said.

When she wants to have fun, Gada likes singing and is really into theater.

Pinky likes playing foosball with the other kids here after school in the Bronco Room. It’s where she gets help with homework. 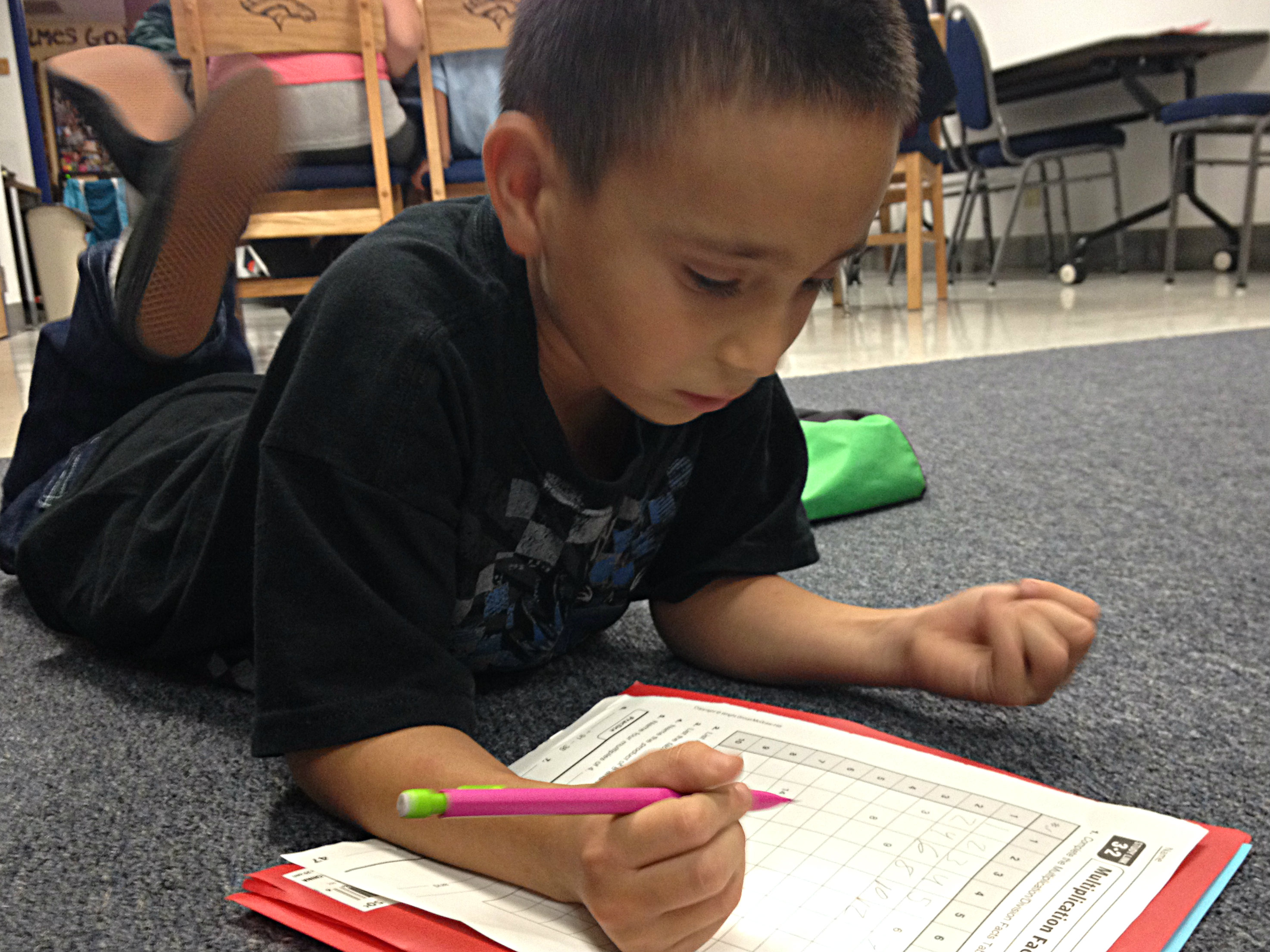 (Photo: CPR/Jenny Brundin)That’s why they like the Bronco Room so much – they have friends who feel like they do.

“I noticed that I’m not the only one who feels this way,” James said. He feels safe here as he works on math homework.

It’s also a change of scenery. The kids say they don’t like sitting in their rooms but often their parents don’t want them roaming around outside.

As Gada talks, rows of beautiful white hair beads fall into her face. She smiles and laughs a lot but it's apparent these children carry a lot of weight.

“The stress is kind of hard," Gada said. "Every time we’re in here we end up spending money when we’re supposed to be saving it because we’re trying to get through the stress by spending, but it’s not really a good idea.

“When I see my mom stressed out, I listen to her when we do family meeting, and I tell her the same thing that she says to us, ‘We have to get through this, you dry up your tears so we can get through this,'" Gada said. And when her mom breaks down and cries, "I want to cry too, but I tell myself I can't cry because I'm trying to get out of here and help ourselves."

But what she worries about most is “when we get out of here we won’t have money to buy an apartment and we’re going to have to come straight back here.”

Sometimes Pinky hears her parents talking about rent, not having enough money to pay it, and that worries her.

“Any time I try to go to sleep, I get very tired but I just can’t sleep,” she said.

Every day, Pinky looks forward to the day her family gets a house.

“What we need most in the world is a new home because my mom doesn’t want to stay here for the rest of her life,” Pinky said.

When James sees his mom or sister stressed, he’ll turn on the TV to get their mind off things.

“They’re sometimes sick and they feel bad and I see that in their will. I just ask them if I can do anything for them, and I just do it for them,” James said.

When I ask what his family needs most, he thinks immediately of his mom.

“My family mostly needs is her spirit and believe in herself and she can do it and she needs her kids to help her,” he said.

"I really don’t see myself [as] poor"

There is a strength in each one of these children. They all look at what they have, not what they don’t have.

Gada said if her family had money, she wouldn’t be different.

As for Pinky, the girl who describes herself as “respectful” and “a great friend to others, her dream has to do with a tennis ball.

“I have a tennis ball,” she said. “I’ve always wanted to become a famous tennis player and if my parents don’t have a house, they can just come live with me.”

“I really don’t see myself [as] poor because I’m very special and I’m the one who’s really working in class,” said James. “Sometimes I don’t get what I want because my mom doesn’t have that much money, at least I get something like I get food and at least we get to stay somewhere.”

Editor's Note: Since Jenny Brundin interviewed the children in October, Pinky’s family has left the program. James’ family moved to their own housing, but is still actively participating in the program. And Gada’s family is still at The Crossing, doing well. Recently, Gada played one of the orphans in the production of Annie at Random Acts of Kindness Theater.