If you’re looking to buy a condo in Denver, you've probably noticed there aren’t many options.

Only 2,205 building permits for condos and townhomes are expected to be issued in the Denver metro area during 2014, according to the Home Builders Association of Metro Denver and  Apartment Appraisers & Consultants. That’s less than half of the 4,642 permits issued in 2005.

Developers and some politicians say the problem is it’s too easy to bring a defect lawsuit in Colorado. So for the second straight legislative session, they will try to make it harder to sue for construction defects.

“All of the big national homebuilders, be it Lamar, Meritage, DR Horton, they all build a multifamily product in every other market but this one,” said Chris Elliott with the development firm E5X Management.

Condo owner Cap Witzler, who owns a home in Denver’s Beauvallon building, thinks that’s a terrible idea. For more than a year, his condo windows were shrouded in an opaque blue film as contractors repaired shoddy work that led water to pool in the condos. 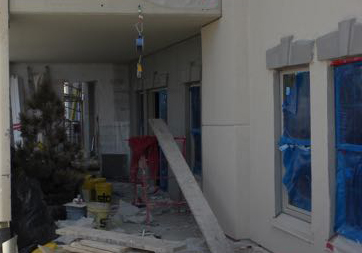 (Photo: Courtesy of Cap Witzler)“We had sopping wet carpet that we could just walk in and squeeze water out of it,” Witzler said.

If the HOA wasn’t able to file a lawsuit, Witzler said the 200 units at the Beauvallon may have needed to absorb the cost through a huge assessment. Instead they were able to settle with the developers, who had to pay $17 million for the fixes.

Lakewood Mayor Bob Murphy calls that an extreme example. In his view, it’s the multitude of frivolous lawsuits that kept new condo projects out of Lakewood for nearly a decade.

“The lawyers get involved and this thing is on its way to a lawsuit before even minor fixes can be performed,” he said.

The city passed what Murphy said is the first ordinance of its kind, making it harder to file defect lawsuits. Still, Murphy admits the measure hasn’t had an immediate impact in the three weeks since it’s been passed.

“There’s no specific project yet,” Murphy said. “And it’s December, the ground’s kind of cold, so we don’t really expect to see any projects rising out of the ground for awhile.”

“Even if you do make it easier for developers to put up new homes, you’re not going to see a surge in new construction. You’ll see more construction, but it’s just not happening anywhere,” Newport said.

Condo construction is near record lows across the country. Strict lending standards following the foreclosure crisis have forced more Americans into apartments. There are almost 10 times as many apartment permits approved in the Denver metro as there were before the recession with 9,800 building permits pulled in 2014.

Molly Foley-Healy with Community Associations Institute Colorado, which represents HOA boards, said the lack of building has more to do with the economy than lawyers run amok. HOAs, she says, don’t enter into defect lawsuits lightly.

“But if you can’t get a real settlement to correct those defects HOA’s are stuck,” said Foley-Healy. “And the boards of those HOA’s have got to protect their homeowners.”

She agreed there should be some reforms, like incentivizing HOAs and developers to settle early on to avoid unnecessary litigation, but she says allowing developers to set the ground rules for how fixes are made is not in the best interest of homeowners.

“Most every individual, regardless of your political affiliation, your home is your biggest purchase, and your rights to recover for defect should never be compromised,” she said. Rather than arguing their case at the legislature next month, she says developers should sit down with HOAs to come up with a more balanced solution.