Luis Robles’ life started off almost idyllic. The Denver teen was born in a small town in northern Mexico where his Dad had an estate, a hacienda, with a farm and dairy. There were cows and chickens and his dad would make cheese and yogurt.

But 18 years ago, drug traffickers moved in. One of Mexico’s most brutal drug gangs tried to extort his Dad, by demanding money to protect the estate.

Luis’ parents worked hard in Colorado. They always had at least rice and beans to eat but Luis remembers it was hard sometimes to keep the lights and water on. His mom cleaned homes after people had been evicted. Luis remembers his Dad’s back-breaking work outside, welding and smashing rock into concrete.

In the throes of the recent recession, his Dad couldn’t get enough work. One image sticks in Luis’ head: his Dad’s scrap metal truck.

“I remember sometimes he would wake me up,” he says. “I hated this.  I feel bad about it now but I was embarrassed, like he had a truck, he would go through the dumpsters, go through the trash trying to find scrap metal so that he could sell and then go buy whatever we needed.”

Sometimes his dad would drive Luis to his middle school in that truck. Luis would ask to be dropped off a block away. He was ashamed. Luis says it was stressful for his father, not knowing English and the move from Mexico that wasn’t his choice.  His dad turned to alcohol. Luis remembers one day, his mom had served his dad a meal.

“He didn’t like it,” Luis says. “He just got really mad. Me and my friend were there and he just threw the plate at my mom.” 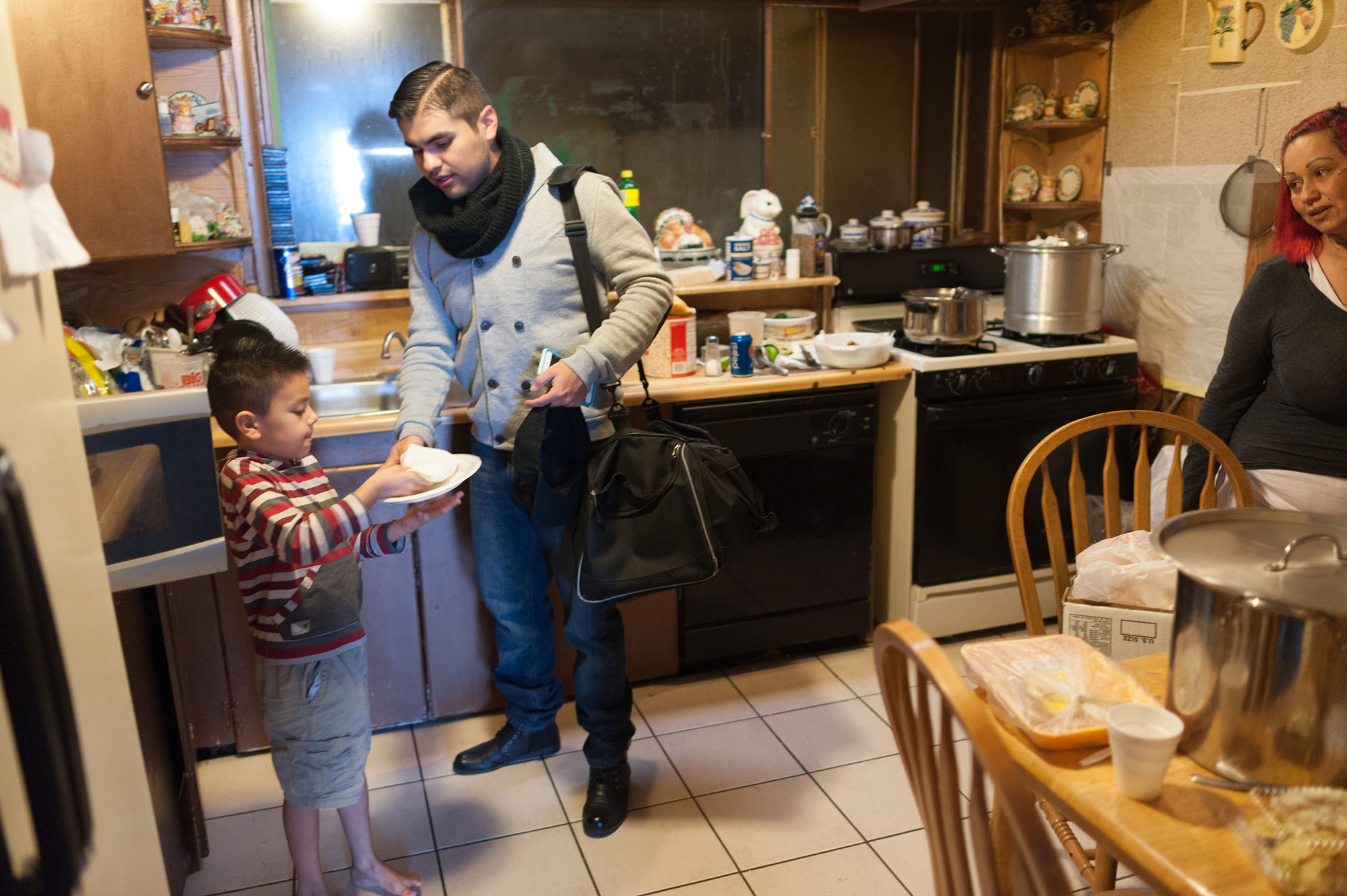 (Photo: For CPR/Kevin Moloney)Luis reflects on his father a lot. It’s a complicated relationship and Luis tries to understand him, and understand how hard it’s been to get ahead.

“You go back down”

When Luis was in middle school, his 16-year-old brother  became a father, and then again two years later. His brother’s choice ties into how Luis’ dreams got stuck.

“The mother of the kids was a drug addict,” says Luis. His family has unsuccessfully tried to gain custody of the children.

Luis ended up taking care of his brothers’ kids after school. It was a lot for an eighth grader.

“You struggle and you’re doing good, but then something happens, and you go back down,” he says.

In high school, Luis wanted to get the best education he could. He applied to a private school -- Kent Denver. He was accepted and applied for financial aid. It was then he found out his visa had expired, and as a result he wasn’t eligible for scholarships. It was at that moment he realized, everything he’d been working for couldn’t happen because he wasn’t in the U.S. legally.

“My two biggest dreams are going to college and becoming a citizen,” he says, his voice cracking with emotion.

Luis turned down Kent Denver. He enrolled instead at CEC Middle College, a career and tech high school.  He ended up taking accelerated classes. He got college credit and is getting a fifth year in community college that’s paid for.

Luis worries about how he’ll pay for the second year. But his family’s has other worries. His brother wound up in jail and was later deported back to Mexico. Luis’ mom figured out at one point how much they’d spent in one year on legal fees for his brother’s jail and deportation issues.

“It was enough to pay for one year of college for me,” Luis says.

At thousands of dollars a month, those legal fees are the families’ biggest expense, and the process has been been going on for over five years. On top of that, the family’s also struggling to pay for his older sister’s kidney dialysis.

Luis carries all this inside. He tries to keep his own goals from fading. He wants to one day serve in the military, he says, to find the role models he never had at home. But first, he  wants to get his bachelor’s degree in sports medicine at Colorado State University. He’d ultimately love to be a physical therapist.  It’s a goal he won’t give up.

He dreams of living on campus which he sees as a respite from the constant roller coaster of hopes and dashed hopes. Like many kids who are undocumented and in poverty, he has a simple wish.

“Be carefree for just a bit,” he says.  “I don’t remember ever just being a kid.”

It’s that sense of not having to care -- just for a minute.

Holding it all inside

Luis got deferred action status. That gives him the right to work in the U.S. two years at a time. He has to reapply in March.  Asked whether his parents are supportive, he pauses.

“I know they’re proud but at the same time I know that they’re going through a lot,” Luis says. “So I don’t want to bother them with what’s going on with me. I’m really close to my mom so I know I can go to her with whatever’s going on but I don’t.”

Luis just bottles up his resentment towards his brother. He says Project Voyce -- a Denver non-profit where he works -- has helped with moral support and he’s learned leadership skills. He helps high school students communicate with teachers and he teaches them how to advocate for themselves.

“Project Voyce,” he says, “They’re the closest thing to a support system I have.”

Then, as Luis thinks about what he does to cope with all the uncertainty in his life, his eyes fill with tears.

He also gets a release from gymnastics and tumbling. His high school didn’t offer sports so in his sophomore year he joined the cheer team at North High, so he could experience pep rallies and football games. Now, Luis volunteers there as a tumbling coach. He liked gymnastics and competing so much he joined a competitive “All-Star” cheer team at a local gym.

“I can just step out of this shy person I am,” Luis says. “To them [the audience], when I'm out there, they don’t know about all that’s going on. I just perform. I like to compete.”

This story is part of our ongoing exploration of Colorado kids who are living in poverty, how it affects their lives and our common future. We'd like to hear your ideas about about what can be done about child poverty in Colorado. Share your thoughtsthrough our Public Insight Network.