Colorado skiers, you've probably noticed a decline in the quality on your favorite mountain lately. The end of the season is nigh.

So let's set our sights on next year! (Yes, it's time to decide where you'd like to sit in traffic next winter.)

Multi-mountain passes are a great way to ski more than one mountain without breaking the bank. The biggest of those passes for the 2015-2016 season went on sale recently at early bird prices, and I've rounded them all up in one handy place.

But beware: Prices will go up soon for many of them and sellers say supplies are limited. Details are below, but for the latest price, be sure to click through to each website. 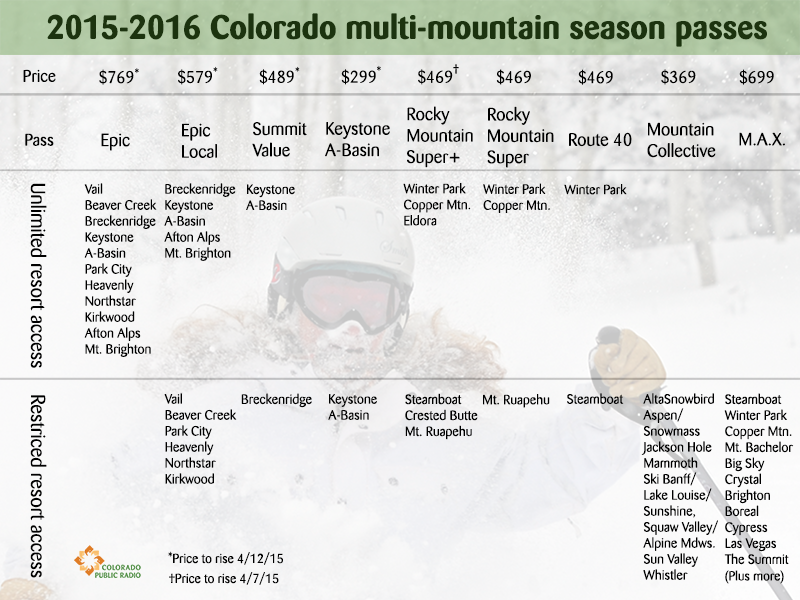 For a die-hard skier who wants access to Colorado's top-flight mountains, the Epic Pass is hard to beat. For $769 for an adult or $399 for a child, you get unlimited access to Vail, Beaver Creek, Breckenridge, Keystone, Arapahoe Basin, Park City (Utah), Heavenly (California), Northstar (California), Kirkwood (California), Afton Alps (Minnesota), and Mt. Brighton (Michigan). The price is up about $40 over last year and $80 from the year before. And they'll rise again on April 12.

Other options include the Summit Value Pass ($489 for adults) for those who want to stick to I-70, and the Keystone-Arapahoe Basin Pass ($299 for adults).

The $469 Rocky Mountain Super Pass + will get you unlimited access to Winter Park, Copper Mountain and Eldora Mountain Resort; six days at Steamboat Springs, three days at Crested Butte, and seven days at Mt. Ruapehu in New Zealand. The price will go up $70 on April 7 though -- that'll be a $100 premium over last year's price of $439.

The standard Rocky Mountain Super Pass gives you unlimited access to Winter Park and Copper Mountain, and seven days at Mt. Ruapehu in New Zealand. That $469 price is not scheduled to go up.

The new $469 Route 40 Pass gets you unlimited access at Winter Park and four days at Steamboat.

If you don't need to ski a different hill each week and only plan on making a few trips each season, you might consider four packs. Winter Park, Aspen Snowmass, Copper Mountain and many others, are now selling lift tickets in packs of four at a fairly significant discount. These sales generally end before the next ski season begins.