The glut is the legacy of a Drug Enforcement Agency program that was set up to stem prescription abuse back in 2011, when the White House identified proper medication disposal as one of four major ways to reduce the abuse.

But many of Colorado's law enforcement agencies haven't disposed of a single pill since Sept. 27, 2014, when federal money went away.

It used to be the DEA paid for drug disposal as part of its take-back program. And at its height, the program involved more than 100 agencies in Colorado. 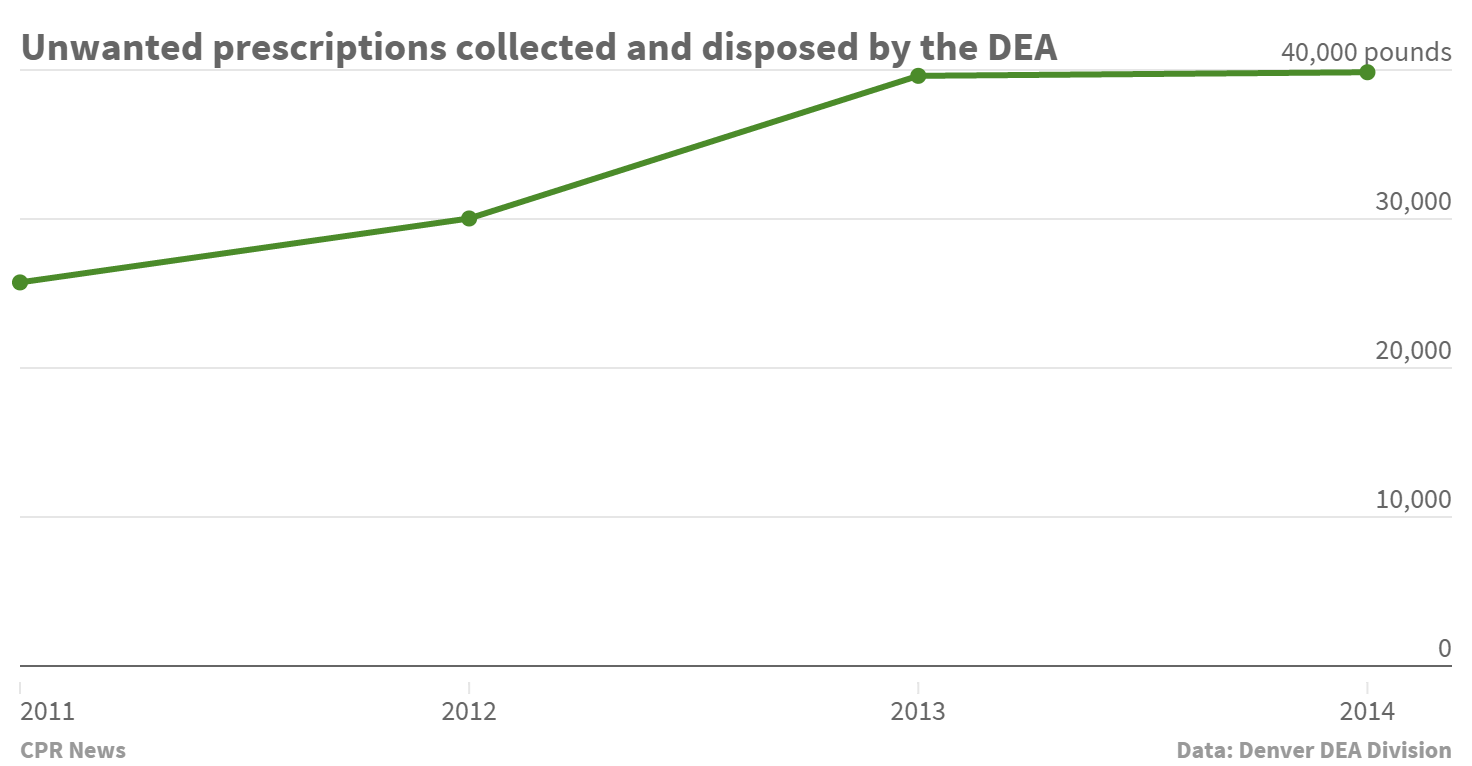 That left most law-enforcement agencies with a choice: continue to accept unwanted medications or close up shop. Some, like the Jefferson County Sheriff's Office, continued to accept medications and even hold their own take-back days.

"The need for us to continue to allow the public to surrender their unwanted pharmaceuticals is important. It’s part of our public service," said Jefferson County Sheriff's Office's public information director, Jacki Kelley.

The cost to the department is "fairly insignificant, to be honest," said Kelley. "Yes, there will some dollars that will be spent in order to do this in a safe and effective manner."

Others, like the Larimer County Sheriff's Department, have been directing people to one of Colorado's original 21 permanent take-back locations.

For those permanent take-back locations, there's only one EPA-approved disposal facility, about 35 miles from Denver, in Bennett to get rid of the drugs.

All these changes come at a time when the DEA was collecting as much as 40,000 pounds of unwanted medication per year.

So far, the organizations that the state has deemed "permanent" take-back locations have been left to themselves to figure out how to dispose of prescription drugs -- or whether to get rid of them at all. Depending on who you ask, you get a different answer.

In Leadville, Police Chief Mike Leak said he didn't know it had been at least six months since the DEA had disposed of any medication.

"I think it's better that they turn them in and I'll figure out what to do with them," he said of people with unwanted prescription pills. "I'll get something worked out, someplace."

"We had a problem and we realized there wasn't a solution coming," he told the Daily Camera.

At the Littleton Police Department, evidence technician Robert Silvas says they're running out of storage space. He estimates the department could keep going for two to three more months.

"You ever seen these people's closets that are just packed to the max? They got bags and clothes stacked and towels... that's kinda what it looks like," Silvas said.

The site at the University of Colorado Anschutz medical campus is one of the few permanent sites that has actually disposed of the medication that they're collecting. That's because the CU School of Pharmacy has paid for it so far.

The future of prescription disposal

For some of these locations, help can't come soon enough -- and it may take the form of $300,000 earmarked in the state's new $25 billion budget for the Colorado Department of Public Health and Environment to help the permanent locations safely dispose of medications.

Greg Fabisiak, CDPHE'S environmental integration coordinator, says the incoming money will support the existing sites, possibly by finding contractors who will pick up unwanted medications and transport them for disposal.

Some of that money will go to create a communications network that could keep sites up to date on news that might affect their prescription collections.

Fabisiak says CDPHE is also working to create and support a state-wide system that has at least one box in each county.

CDPHE is also working to identify a retail pharmacy that might be willing to act as a disposal agent. Though, there are some Colorado pharmacies that accept unwanted medication now.

"That's our hope someday, is that we'd be able to broaden the network so that we have more than just law enforcement agencies collecting them," Fabisiak said.

That still leaves certain law enforcement agencies, like Yuma, as the only option for at least 50 miles. Yuma Police Chief Jon Lynch says their box could be full "within a matter of months."

"We may end up getting rid of this drug take-back box because we have nowhere to store the medicine we've got coming in," he said.

Fabisiak says the $300,000 is designed to provide a network of services that can keep places like Yuma operating.

"But I have no funding right now to support that now," he said. "It's really kind of a local decision as to whether they feel its right to continue to collect."

Editor's note: An earlier version of this story misstated the name of the University of Colorado Anschutz Medical Campus.