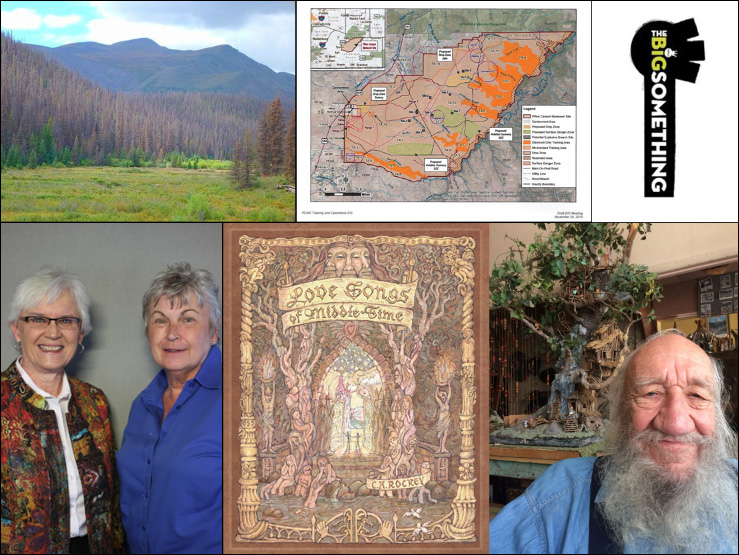 On this episode of The Big Something Radio Programme, news director Andrea Chalfin speaks with the authors of a paper about the conflict between the military and ranchers in Piñon Canyon; Big Something intern Emelie Frojen looks into the beetle kill on Wolf Creek Pass; Former Colorado Springs Mayor Mary Lou Makepeace and former City Councilwoman Jan Martin look back on their careers in politics; And a portrait of Manitou artist Charles Rockey as he releases a book of fables and illuminations 15 years in the making.

The Army created its Pinon Canyon Maneuver Site in Southeastern Colorado in the 1980s.  It was still the Cold War, and the Pentagon identified a shortage of training land at Fort Carson as weapons and tactics evolved. Through a series of public meetings and land acquisitions, the Army established the training site, but left a bitter taste in the mouths of many locals.  More than twenty years later in 2006, the Army announced plans to expand the site, an act that spurred folks into organized resistance, which was eventually successful.

That resistance is the subject of a recent paper from two professors in Colorado Springs, who looked at the strategies employed by both the military and the opposition. UCCS Professor of Geography and Environmental Studies David Havlick and Colorado College professor of Southwest Studies Eric Perramond sat down with KRCC's Andrea Chalfin earlier this year to discuss their paper.

At the time this interview was recorded, the Army was undergoing a required review process for expanded training at the Maneuver Site, which has since been approved.  The Army expressly stated that the expanded training would not require a physical expansion of the site.  Many of the nearby residents say it's only a matter of time.  Others expressed support of the changes, saying that the military simply has to have somewhere to train as strategies and technologies continue to evolve.

If you’ve driven over Wolf Creek Pass in southern Colorado in the past several years, you’ve probably noticed that much of the once green spruce forest has died off and turned red. This past Spring, Big Something intern Emelie Frojen looked into the causes and effects of this alarming change.

Last month, KRCC welcomed StoryCorps back to Colorado Springs. StoryCorps is a non-profit organization dedicated to recording and preserving the stories of people around the country from all backgrounds and walks of life. They set up their mobile booth at Ivywild School in Colorado Springs, and invited the public to record interviews with friends and loved ones. In the following interview, former Colorado Springs Mayor Mary Lou Makepeace, and former Councilwoman Jan Martin sat down together to talk about the challenges and joys of being a woman in politics.

You can hear more installments of StoryCorps on NPR every Friday morning on KRCC during Morning Edition, or at their website, storycorps.org.

In our last segment, Noel Black brings you a profile of beloved Manitou artist Charles Rockey. He just released a book of fables and illuminations--Love Songs of Middle Time--that he’s been working on for the  past 15 years. You can buy copies of the book at the Manitou Art Center, the Manitou Heritage Center, and Miramont Castle in Manitou.