James Holmes, who pleaded not guilty by reason of insanity after he shot and killed 12 people at a midnight premiere of "The Dark Knight Rises" in 2012, has been found guilty of first-degree murder.

The verdict means the 27-year-old former neuroscience graduate student could get the death penalty for the attack.

The courtroom was tense as Judge Carlos Samour opened the envelope from the jury.  Families of the dead were in the gallery. Many of the injured, who testified in the trial, were there too. Some wept as each of the murder convictions were read. Others sighed with relief. 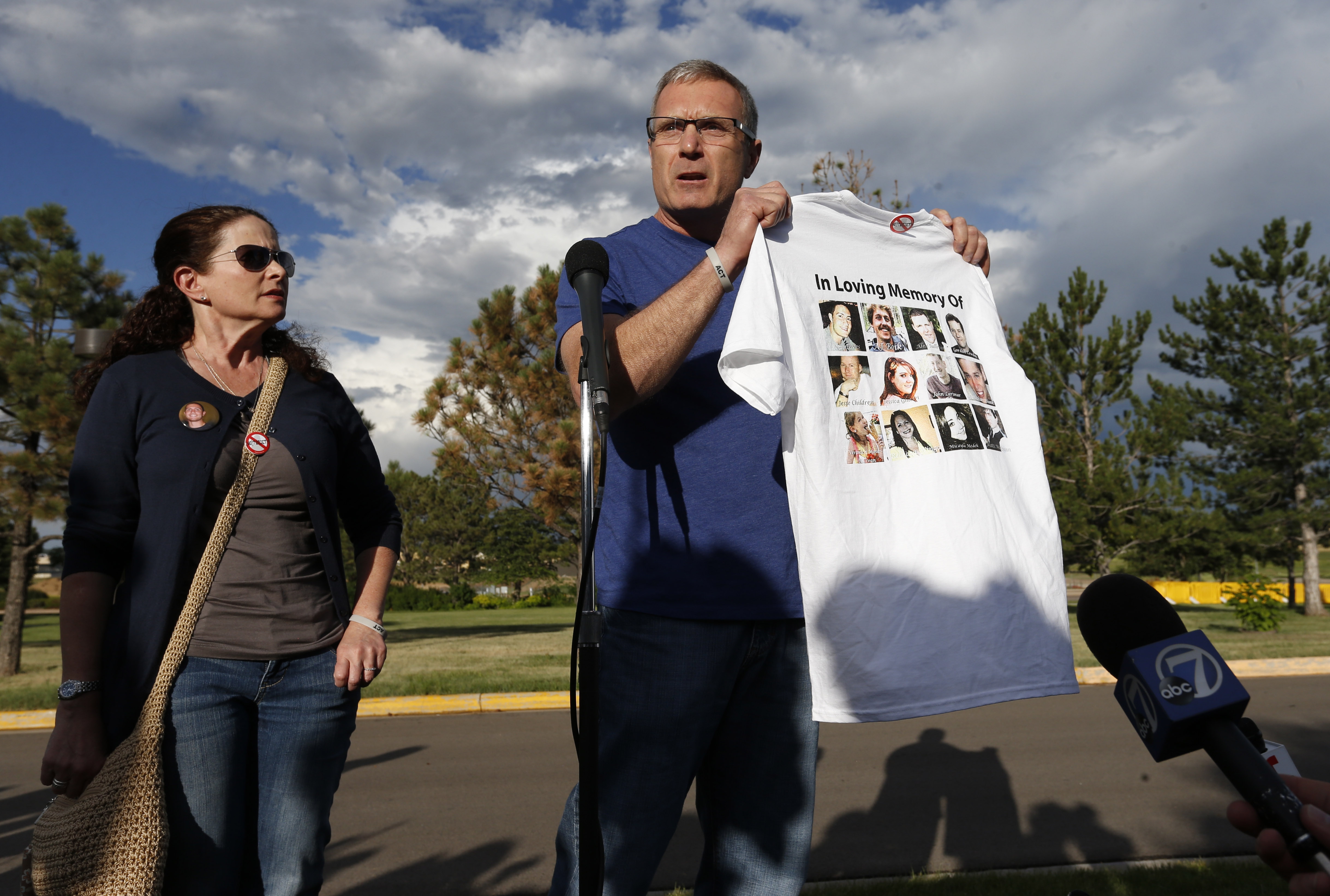 (AP Photo/Brennan Linsley)Holmes, dressed in a blue dress shirt and khakis, his hands in his pockets, stood at the defense table as the verdicts were read. He didn't acknowledge his family in the courtroom. He showed no visible emotions as he listened to the repeated "guilty" verdicts being read.

Prosecutors emphasized the deep planning that went into the attack, how Holmes spent months gathering weapons, building bombs in his apartment, and recording his thoughts in a notebook that he sent to his psychiatrist the day before the shooting.

In that notebook, he debated how to cause the most carnage and why he selected the particular theater he did to carry out his plans.

Prosecutors also emphasized the lengths Holmes went to hide those preparations. For instance, he bought the guns and equipment using a credit card so his parents couldn’t see the bill. He also spaced out his purchases so as not to draw attention. All of these details were woven together to argue Holmes was thinking and functioning rationally -- and knew what he was doing was wrong. Those were the two things needed to overcome the insanity defense.

In the end, it took jurors only a day and a half to return guilty verdict.

Relief and a desire to move on

Outside the courtroom, a rain storm had just passed the judicial complex and a bright rainbow formed in the background as observers filed out. Some talked to reporters gathered there.

Jansen Young was among them. Her boyfriend Jonathan Blunk died shielding her from the bullets, and she said she was shocked at how quickly the jury returned a verdict.

"I felt so much relief, I just feel closure and a weight lifted that I didn’t even know was there," she said.

Visibly angry, Young said that while she was in the courtroom she kept her eyes on Holmes as the guilty verdicts were read.

"I wanted to know what is his response and there’s just nothing. Which I mean is how I feel toward him is nothing. He’s a speck of nothing in my life, and I don’t want to give him any energy.”

Tom Sullivan, whose son Alex died after being shot in the heart, said, "I hope I can do everything I can to see that this guy’s Colorado privileges are taken away, that he no longer gets to breath the sweet air us Coloradans get to breath anymore."

Tom Teves, who also had a son named Alex die in the theater, said he didn’t care whether Holmes was to be put to death for his crimes, or whether he would the rest of his life in prison.

"All I care is that he wasn’t back on the street to kill somebody else’s kid, because you know what it sucks to have your kid dead, it sucks and it’ll never stop sucking," he said. 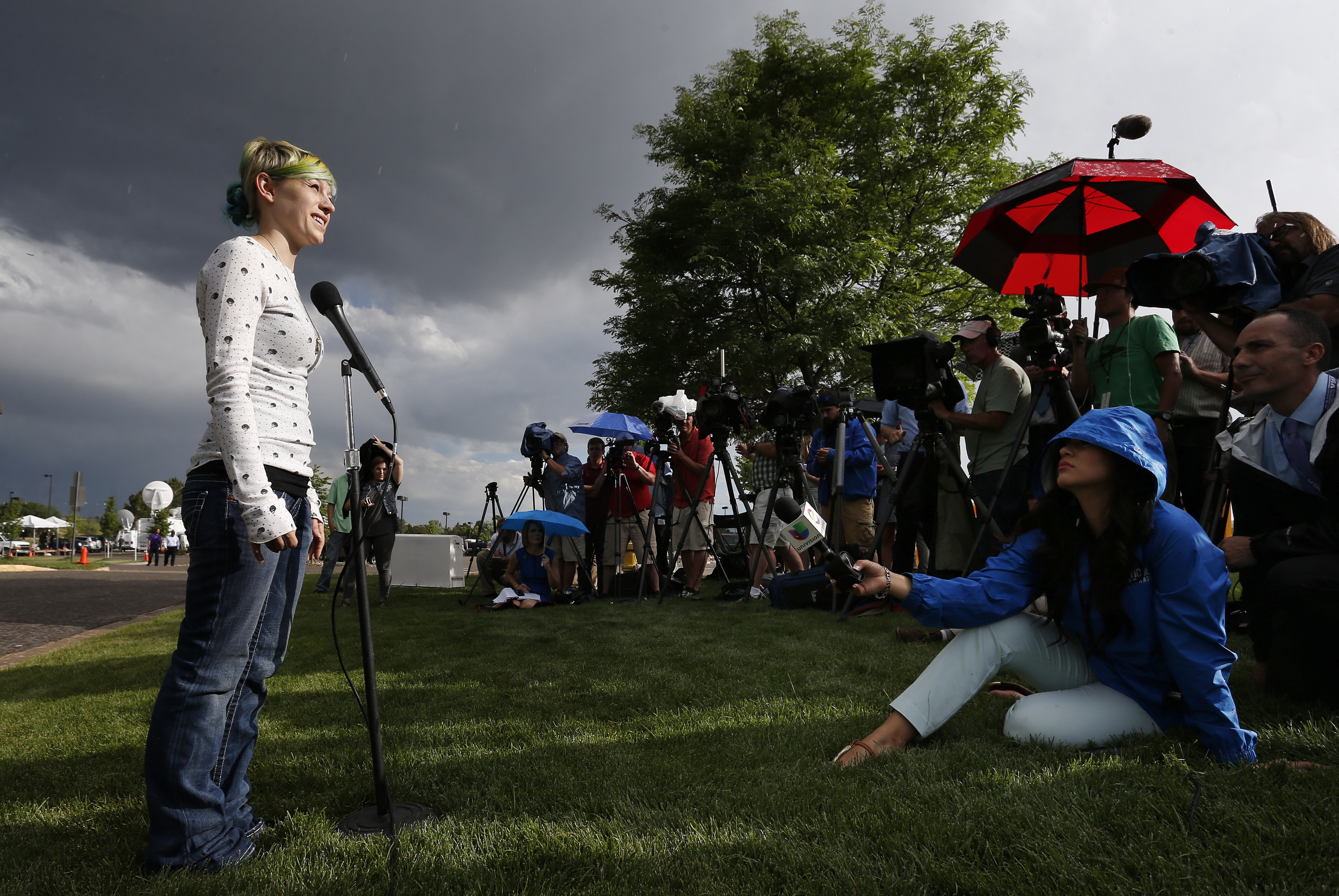 (AP Photo/Brennan Linsley)Marcus Weaver, who was shot in the arm, saw his friend Rebecca Wingo killed as she sat next to him in the theater.

“When they announced Rebecca’s name the tears just flowed out of my eyes, and still right now it’s a level of sadness and there’s this pain in my stomach. And then they of course read my name off too but at that point I wasn’t just watching anymore and trying to hold the tears back," he said.

Sandy Phillips, whose daughter Jessica Ghawi was killed, said "We're very happy this animal, this monster, will never see the light of day."

Phillips and her husband, Lonnie,  Jessica's stepfather, relocated to Colorado to attend the trial. They've lived in a camper parked at a generous stranger's house not far from the court, and spent countless hours in the courtroom during the trial.

"We see him watching himself on every video that’s presented. We watched him watch the coroner’s reports and the videos of the dead, and not shed a tear," she told Colorado Matters on Wednesday, before the verdicts were handed down.

"This has been an emotional and difficult time for the victims, their families, loved ones and friends," Gov. John Hickenlooper said in a statement late Thursday. "My hope is that this step brings some peace to each of them, and begins the healing process for all of Colorado. We have great respect for the work of the jury and are so grateful for their service and commitment."

Sentencing phase will likely be emotional

"What we can expect from the prosecution [during the sentencing phase] is a lot more emotional testimony," said Karen Steinhauser, criminal defense attorney and former prosecutor. She teaches at the University of Denver law school.

"Victims, survivors are able to talk about now the impact that this crime has had on them -- on their lives, on their families, on every aspect of their life," she said. "The defense has an opportunity to put on mitigation, to try to show that the jurors should spare their client's life. We may hear from his parents. We may hear more about his struggles with mental illness. We may hear more about his life in general. But, you know, the defense attorneys are going to do everything in their power to try to persuade the jury to spare their client's life."

To get the death penalty, the prosecutor will have to show "that there is at least one aggravating factor. For example the number of people who were killed, the fact that one of them is a child, the fact that this was done in the manner in which it's done," Steinhauser continued.

"The bottom line in this type of penalty phase is that the ultimate decision for the jurors is whether they believe that death is the appropriate sentence for the defendant. And it's a tough decision for people to make. There aren't as many rules of law and instructions that are given to the jurors in that. So it becomes much more of a personal decision, in some ways, than the legal issues that we've been dealing with in [the first] phase of the trial."