Here are some questions and answers about the new PARCC tests, which sparked student walkouts last fall.

PARCC, which stands for Partnership for Assessment of Readiness for College and Careers, is a consortium involving 10 states. PARCC developed a common set of tests designed to reflect the tough new academic standards known as the Common Core. Parents might be familiar with the tests known as CSAP and TCAP – they’ve been around since 1997. PARCC is replacing those.

What are these new tests hoping to be measure?

The idea is to gauge how well students have learned new standards -- those encourage critical thinking and real-world problem solving. Students have to do much more complex thinking than just fill-in-the-blank answers.

Why was there a need for tougher standards and tests?

Thirty-four percent of graduates from the class of 2013 who went to public colleges in Colorado needed remediation in at least one class. Colorado is only producing 22 college graduates to every 100 students who enter a high school here. And nationwide, there was a sense that there needed to be a higher bar to get students ready for post-secondary education.

Why did so many students - especially at the high school level - refuse to take  these tests?
Just half of Colorado's 11th graders took the PARCC English tests. That cohort was instead focused on their ACT college entrance exams. Others believed they're simply being over-tested. Still others had concerns about the results of the tests being used to evaluate teachers when the scores don't "count" for students.

How did Colorado students do on the tests?

Depending on the grade, in English/language arts between 37 and 42 percent of students met or exceeded expectations. That's the highest-achieving category. 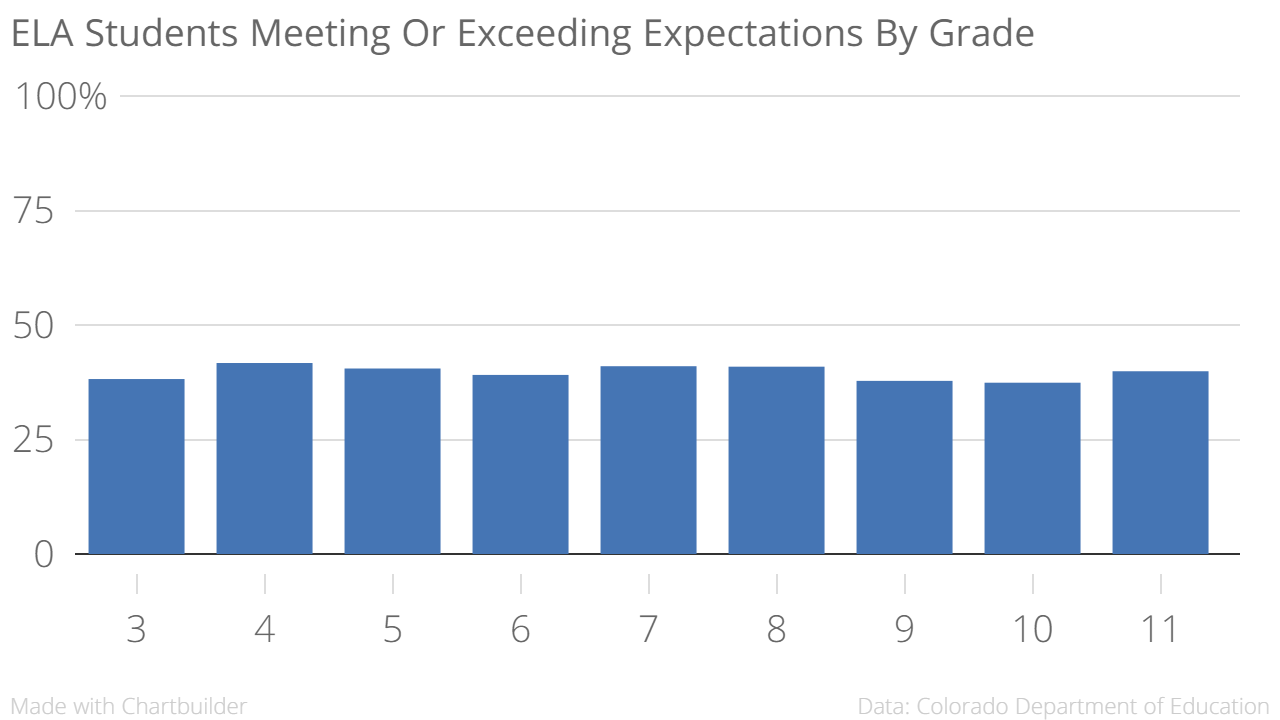 In math, the performance wasn't as good. On the low end, just 19 percent of eighth graders are where they should be in math; on the high end, 37 percent of third graders are on target. 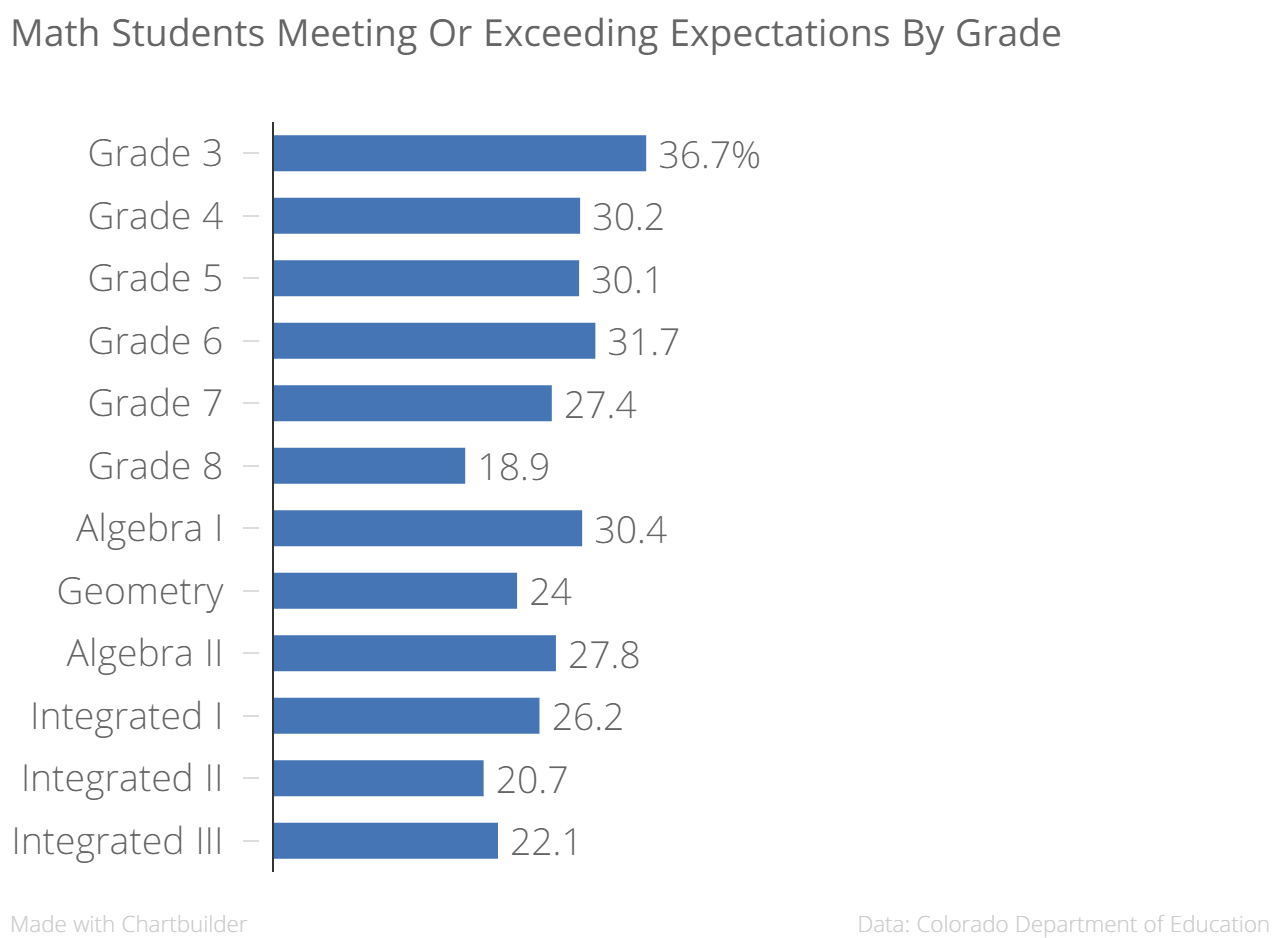 These are new tests so there is no past performance to compare to. But these results are similar to scores by students in other states. Test scores are relatively low because the material kids are learning and being tested on is much harder than before. Also – these are new tests. Not only is it an entirely new way of thinking, students had to get used to taking tests on a computer.

“These scores don’t provide an apples-to-apples comparison to old test scores,” Interim Commissioner of Education Elliott Asp said in a statement. “The new tests measure different things – such as where students are in developing the critical-thinking and problem-solving skills outlined in the Colorado Academic Standards. We should all consider these scores as a new baseline from which we will measure the future success of Colorado students.”

Officials expect scores to rise in the future.

Regarding the low test scores this year, parents shouldn’t panic, says the Colorado Department of Education’s Joyce Zurkowski.  She says what students are learning is harder now, because so many high school graduates were getting to college needing remediation classes.

“That’s what we’re trying to address is make sure that students are getting honest messages earlier and so that when they are leaving high school and being told that they are ready for the next step, they truly are,” she says.

She says the more rigorous tests are analogous to moving from the junior varsity team to the varsity team.

On these harder tests, are we still seeing gaps between student groups?

Yes. The gender gap is quite large in English –  with many more girls than boys meeting or exceeding expectations. Gaps were as large as 16 percentage points in seventh and eighth grades. 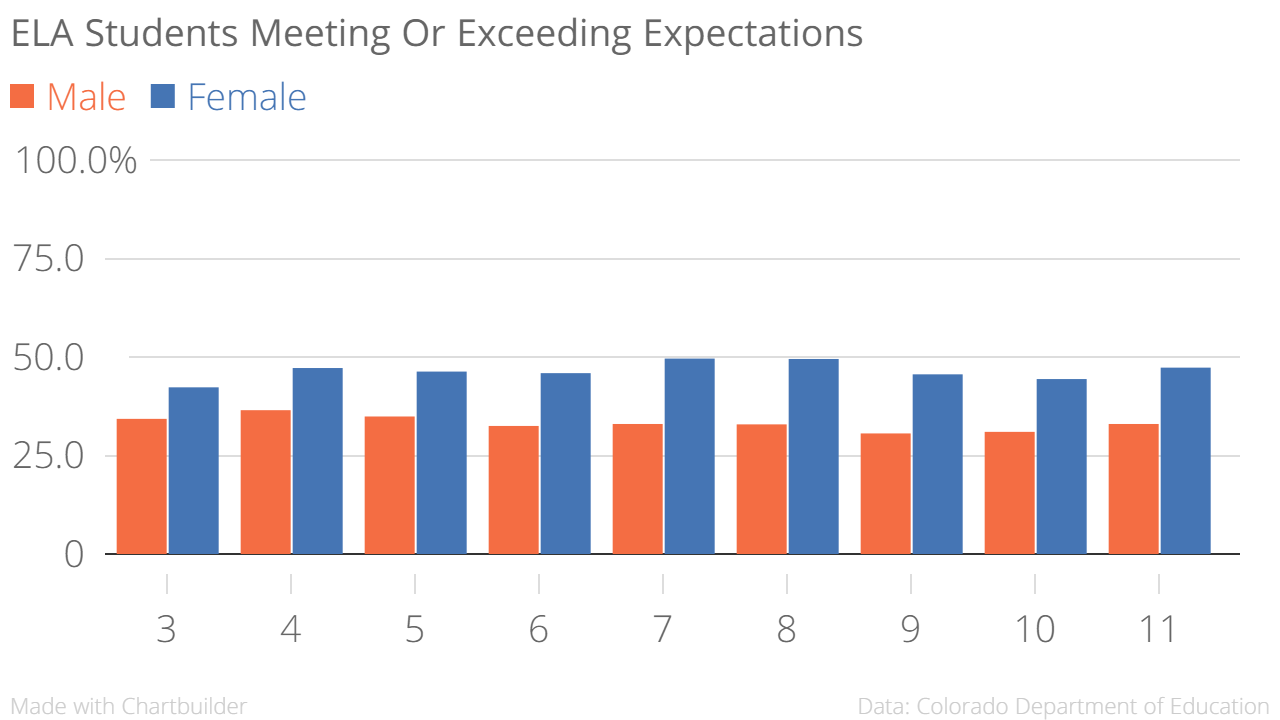 In math, the gap is quite small, with boys ahead in some grades and girls in others. 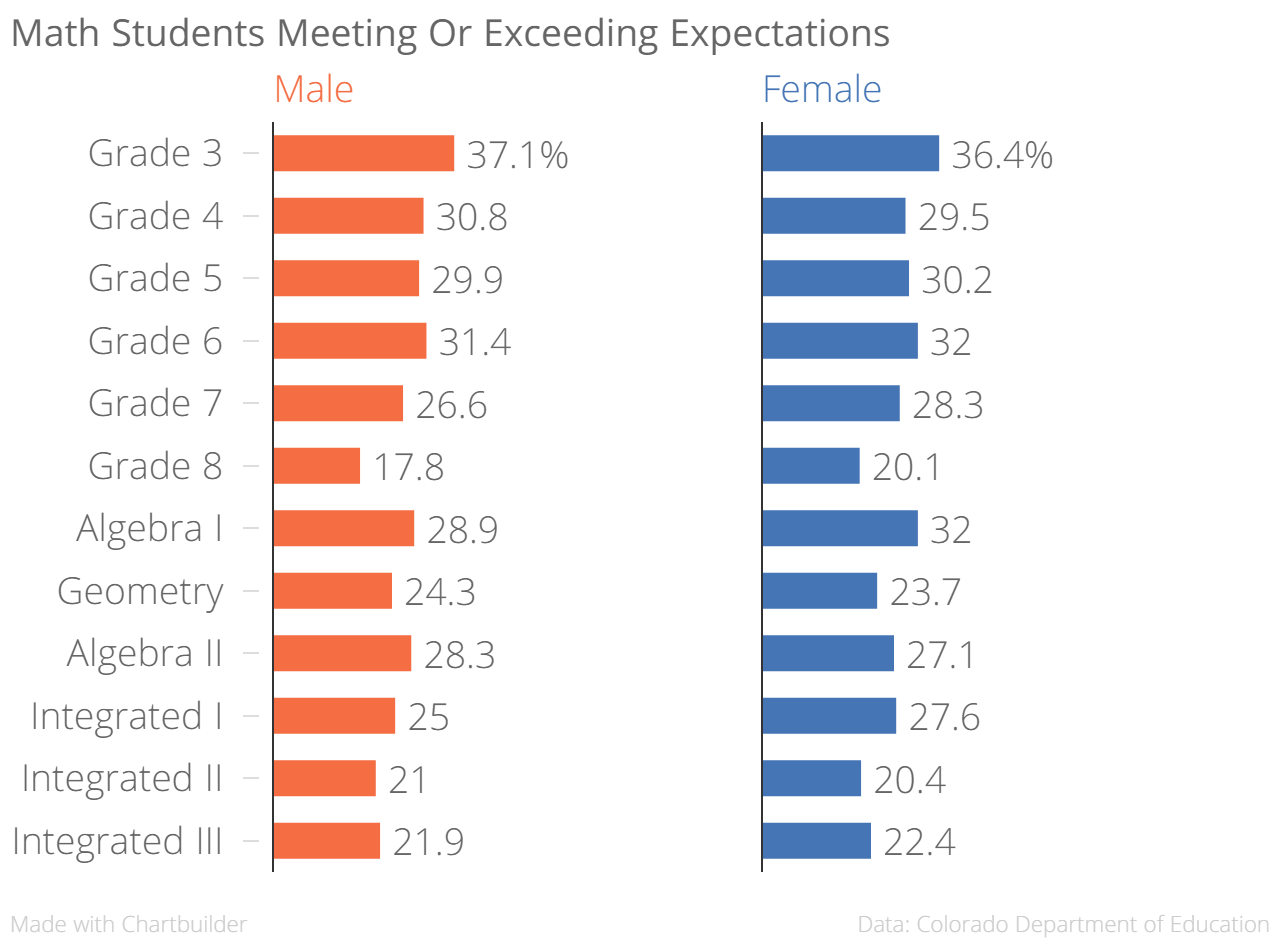 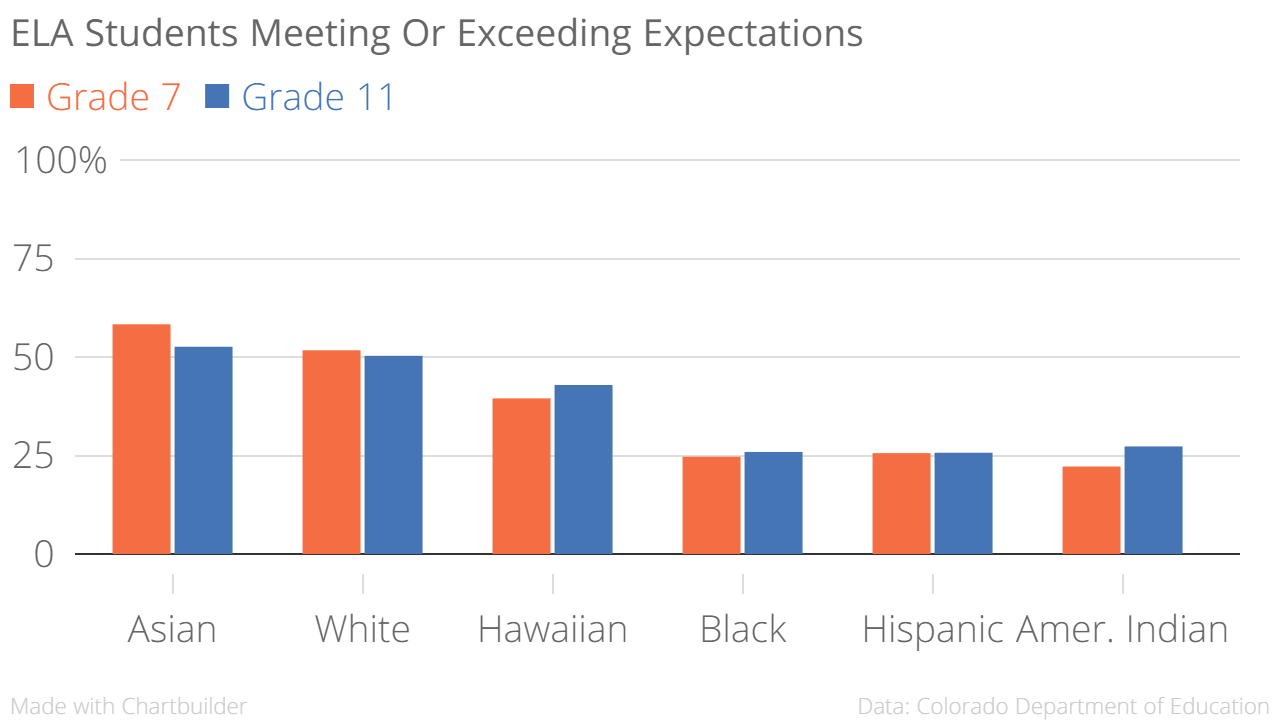 The gaps are even larger in math. For example, in fourth-grade math, just 14 percent of black students are at or above grade level compared to 51 percent of Asian students and 40 percent of white students. In high school math, gaps are roughly 20 to 25 percentage points between whites and blacks and Hispanics – but Asians score up to 43 percentage points higher than other minorities. 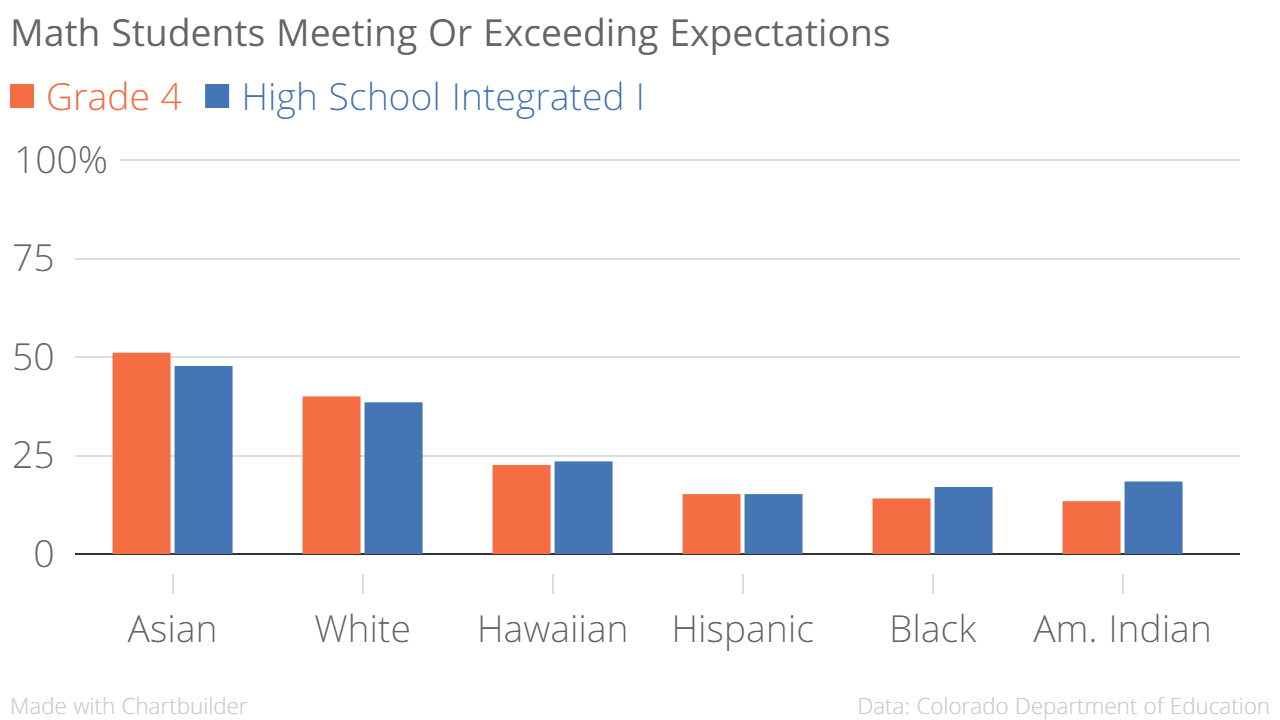 And low-income students score on average 22 to 32 percentage points lower than other students. 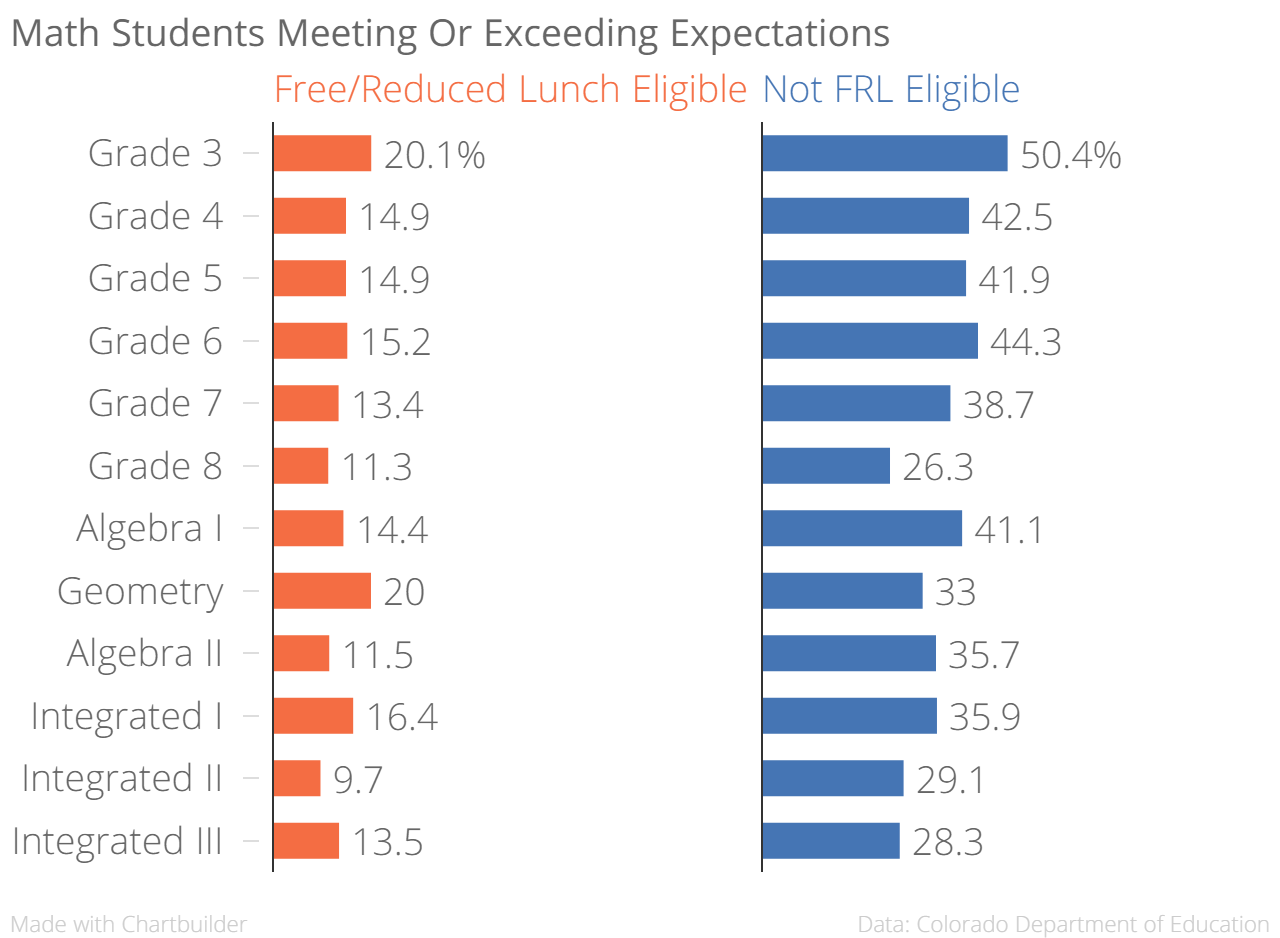 How did state school board members react to the scores at their meeting today?

They reacted skeptically, questioning the accuracy of the scores in measuring what a student knows.

Most expressed concern about using the results to evaluate teachers and schools. Board member Deborah Scheffel and others questioned using PARCC for high-stakes accountability when tests “dramatically disadvantage” students who are learning English and students who have poor vocabulary and syntax, they said.  Scheffel said the tests are very “language-intensive” and questioned whether they measure what students are learning.

Several board members noted that testing experts testified before the board that it can take four to give years to get a test “right.”

“If you take these results at face value, almost two-thirds of our students have failed," said board chair Steve Durham. "I have a hard time believing that number. I’m not inclined to believe that these results are as dire as they appear but there is no way for me to assert that with any greater degree of certainty than anyone else on this dais can assert that they are in fact an accurate and true measure of what’s going on and that’s the  fundamental problem with these tests.”

How did state education officials respond?

State education officials appear to have more faith in the tests. They did acknowledge that the validity of test results at the 9th grade level will be questionable because participation rates were low. (10th and 11th graders, who also had low participation rates, won’t be taking PARCC tests next year.) But participation rates at the elementary school level were about the same as for the old tests, and middle school rates were slightly lower. But because more white affluent students opted out of the tests, Interim Commissioner Asp urged caution when interpreting school and district-level scores because there is wide variation in scores, depending on who participated in the tests.

How are teachers and superintendents reacting to the scores?

Like state education officials, they are urging that the test results be viewed through “a lens of great caution.”

Bruce Caughey, the executive director of the Colorado Association of School Executives, which represents school superintendents, says last spring’s roll out of the tests created many inconsistencies.

“The tests were almost entirely given online and came with a number of widely-reported technical glitches and frustrations for our kids,” he said in a statement. “Also, both the number and extraordinary length of the tests in Colorado led to high opt-out percentages, especially in affluent areas. Because of these disruptions, we have serious questions about the accuracy and generalizability of these results. Frankly, at this point it’s difficult to tell what the results mean.”

How did individual schools and districts perform on the tests?

Those scores are being released separately this year. That won’t happen until early December, when parents will also get detailed information on how their children scored and breaking down those scores and what they mean. It will tell them the level their children performed at, the school average, the district average, the state average, and the average of all the states in PARCC.

What will these PARCC test results be used for?

They’re designed to give parents, teachers and students a sense of whether students have mastered grade level standards by the end of the year. They’ll allow school administrators to compare how their students are performing compared to their peers in other schools in a district, to other districts across the state, and to other states that take PARCC tests.

Teachers and principals will also be able to track yearly growth. That is, if a student enters seventh grade two years behind grade level, how much did they catch up in one year? And finally, the hope is that teachers will be able to take this information and use it to adjust how they teach in future years.

Will the tests change next spring after student protests last fall?

Also, the overall testing time was shortened by 90 minutes. Last spring Colorado students had two windows of tests which many said made it feel like they were taking tests all the time after spring break. Those tests will now be given in one window.

Will the tests count for anyone?

PARCC tests don’t count for students but they may count in the future towards teachers’ evaluations. There is a one-year pause in the accountability system to give students and teachers more time to get used to the tests. So districts and schools also won’t be assigned a rating this year as they normally do. They will resume in the 2016-17 school year.