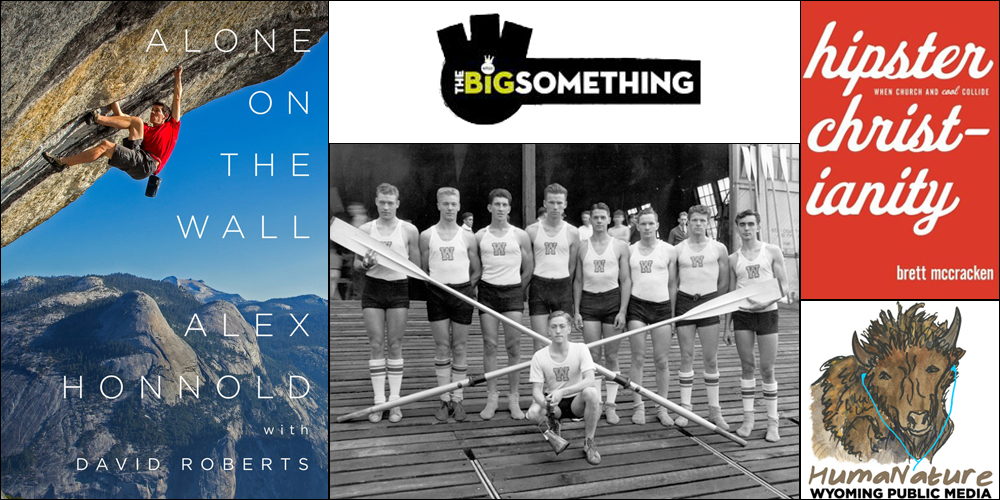 On this episode of The Big Something, author Brett McCracken discusses his book Hipster Chrisitianity, When Church and Cool Collide ; Daniel James Brown shares the incredible story of how a young team of working class American rowers beat the odds--and the Nazis--at the 1936 Olympics in Berlin; Rock Climber Alex Honnold talks about his career climbing some of the most iconic rock walls in the world, with no rope; and we bring you an episode of the show HumaNature from Wyoming Public Radio about a search and rescue mission in the Rocky Mountains.

For many in the Pikes Peak region, the words “evangelical Christian” are likely to evoke religious and political opinions across the spectrum. No matter where you stand, though, evangelicalism has been a major part of Colorado Springs history over the past three decades. For the upcoming episode of KRCC’s documentary program Wish We Were Here, we’ve been exploring how evangelical culture has changed over the past decade since Former New Life Church Pastor Ted Haggard’s sex and drug scandal shook the foundations of the so-called Evangelical Vatican. One of the many emerging subcultures we look at in the episode is what author Brett McCracken calls Hipster Christianity. McCracken is a lifelong Christian who, despite his southern baptist background, has also long preferred the music of Radiohead and the films of Terrence Malick to the Christian rock and flims that he was raised around. In his 2010 book Hipster Christianity: When Church and Cool Collide, he asks what it means that a new generation of millennial christians, like himself, increasingly align more with the art, music, and in some cases, even politics of their secular peers. Here’s an excerpt of our interview with McCracken, some of which you’ll hear in next weekend’s episode of Wish We Were Here.

For many journalists and writers, the best stories can often fall into their laps after years of chasing down leads. This was the case for New York Times best-selling author Daniel James Brown, who happened upon the story of a plucky young group of working class kids who banded together to beat the Nazis in a legendary Olympic rowing competition that was almost forgotten. Colorado College professor Steven Hayward spoke to Brown about his book The Boys in the Boat just before his lecture on the CC campus this past week.

If you’ve ever seen footage of Alex Honnold rock climbing without ropes (aka free-soloing), the very mention of his name probably makes your palms sweat. Now 30 years old, Honnold has already become one of the most legendary climbers in the history of the sport as much for his capacity for danger as for his calm demeanor. But it would be inaccurate, says Honnold, to describe him as a daredevil. To prove why, and how he sees himself as simply a hardworking athlete driven by a solid work ethic and lots of preparation, he’s written a new book called Alone on the Wall with writer David Roberts. KRCC’s Noel Black spoke with Honnold shortly after the release of his book earlier this month.

In our last segment, we bring you a story from the podcast, HumaNature, produced by Wyoming public media. HumaNature is a show about the complex and sometimes troubling relationship between humans and their habitat, and it features real stories of life, death, survival, and exploration in the natural world. This is episode three of the show, called "When a Search and Rescue Becomes a Search For Something Else," and it takes place in the Colorado Rocky Mountains.

If you enjoyed that episode of HumaNature from Wyoming Public Radio, you can find more at humanaturepodcast.org.