Just when you thought you couldn’t take anymore heat, here’s a sobering fact: Colorado ranks among the top 10 states with the fastest-warming summers. And as the climate changes, temperatures could rise even more. 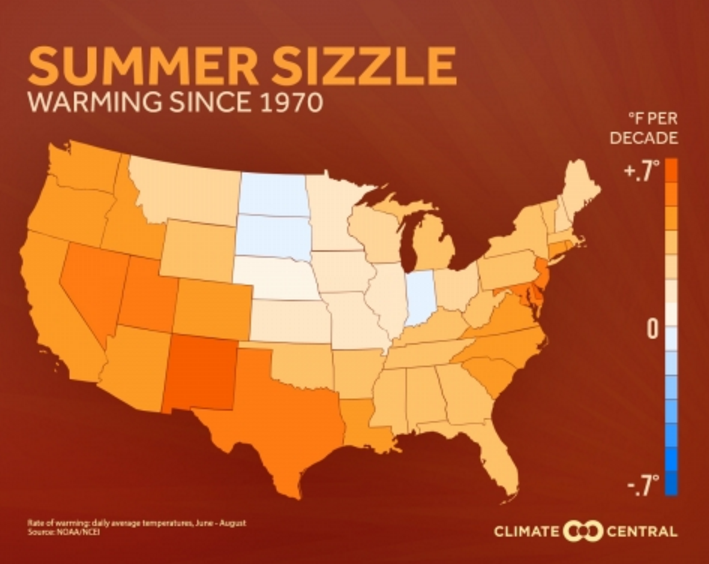 The big takeaway is that Climate Central expects National Weather Service-designated danger days of high heat to more than double across the country by 2050.

Historical data analyzed by Climate Central paint a picture of Colorado cities already seeing prolonged heat. Greeley and Fort Collins rank among the top 20 cities that have seen the fastest rate of increase in 90 degree days since 1970. Boulder ranked third among cities that have seen a change in air moisture.

The findings interest Colorado State University Epidemiologist Brooke Anderson, who studies the impact of heat on human health. She said current research shows that the risk of death and hospitalizations can increase during really hot weather.

“Most people probably think about heat stroke and dehydration when they think about the health risks,” she said. “But there are a lot of other threats too from other causes including more general things like cardiovascular and respiratory [conditions].”

In Colorado, one concern is that hotter summers can lead to increased ground-level ozone. Front Range residents are already familiar with ozone alerts, which warn the public to limit ozone causing pollutants. People who already have asthma and other respiratory illnesses may be particularly susceptible to negative impacts of high ozone.

One big research question for Anderson is why residents in cities with extreme heat—say Miami—are have a higher threshold of heat tolerance compared to residents in colder climates—like Anchorage.

“I think for Colorado and more generally across the United States one of the key concerns is to figure out how to adapt to heat as it gets hotter,” she said.

As the climate changes, Anderson said it’s going to be increasingly important to understand how and why the human body adapts to the heat.