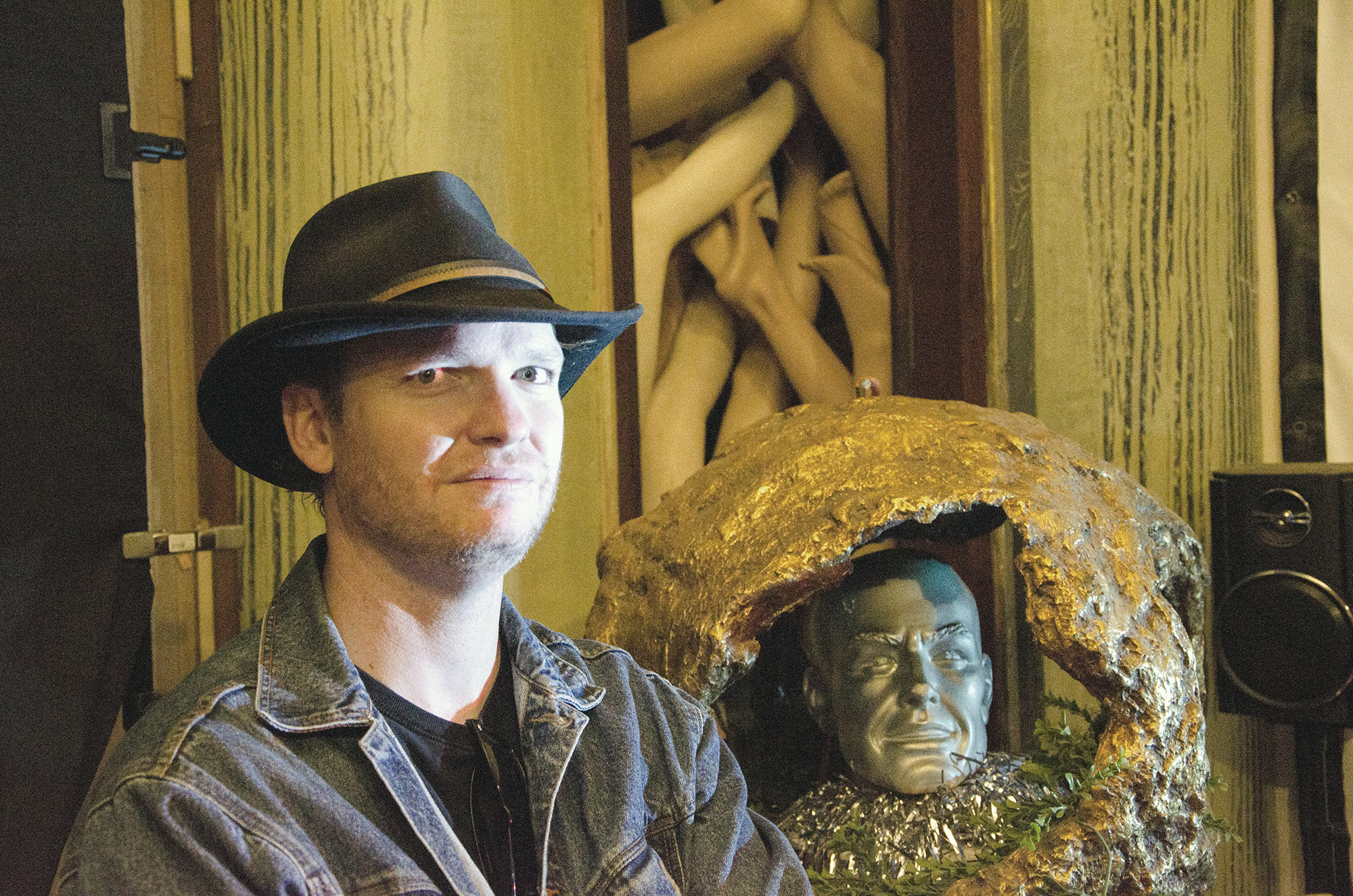 They change wires and turn knobs until a screen finally turns on.

He wants the vintage TV to display the name of the current exhibition at Rule Gallery: “Between Stations.”

Bagley says the title is a nod to when one AM radio signal bleeds into another. And you’re stuck between the two stations.

“It was a good metaphor for what’s happening to all of us getting kicked out of this space,” Bagley said.

Rule Gallery will move to a new home in September after its final exhibition in the River North neighborhood -- known as RiNo. “Between Stations” runs through Saturday, Aug. 27.

The whole block was bought by a developer that plans to demolish the buildings. That also includes a gallery called Hinterland, which opened in 2008.

“It’s been highly stressful as a gallerist because you can’t really plan exhibitions out,” Rule Gallery owner and director Valerie Santerli said. “You can’t really do your full job when you don’t know where you’re going to land.”

Artists have helped turn the once industrial area in north Denver into a thriving art district. Cheap rents and warehouse spaces kept them in RiNo.

But that’s also opened the door for developers to buy out plots and rebuild. And this, along with higher rents, have forced out some artists and galleries.

Out With The Old

Robin Rule is the gallery’s namesake. In 2013, she died of cancer at age 55. She’s remembered as a bold contemporary art visionary who co-founded her first Denver gallery nearly 30 years ago. 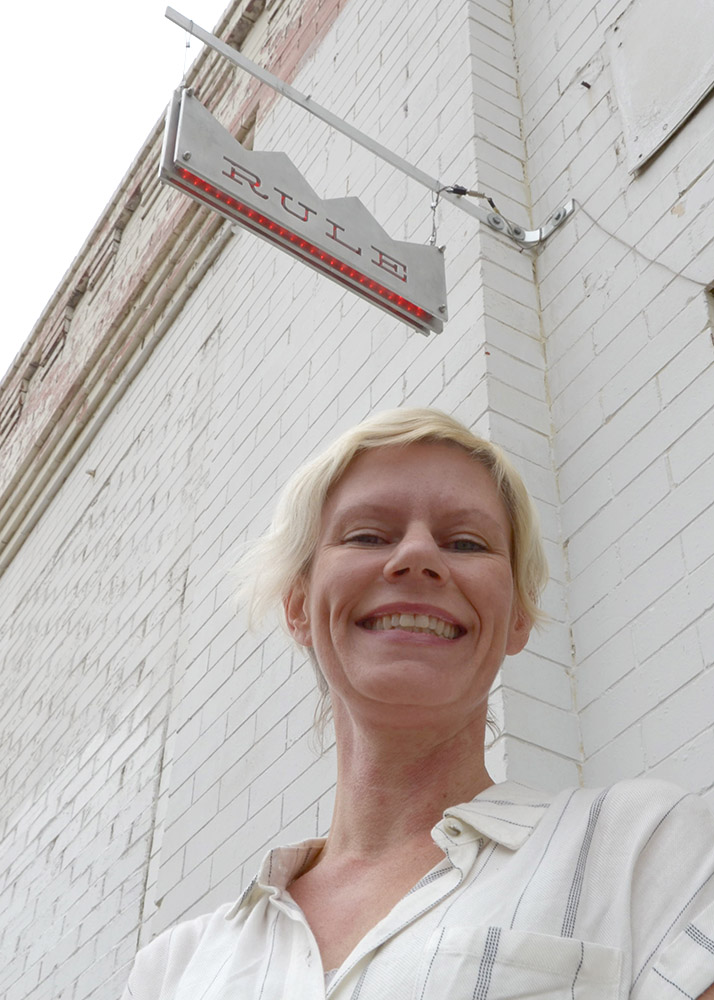 (Corey Jones/CPR News)“She was a tastemaker and intimidated a lot of people,” Santerli said. “I think she was a very powerful woman.”

Rule was also a risk-taker, and the gallery has tried to carry on that legacy, Santerli said. It shows with “Between Stations.” Four artists use a range of media and technology, from digital video and wood sculpture to drawings created with a photocopier. Artist Chris Bagley uses small, vintage travel TVs to display his dad’s photography negatives.

“The goal is to do things that are non-traditional,” Santerli said. “I think once you walk through the exhibition, you’ll see things you wouldn’t normally see in a commercial gallery.”

For artist Steve Legg -- who goes by the moniker “s.legg” -- it’s bittersweet to be a part of this show.

“Everything is changing and all this stuff is going to be Starbucks-y and condominiums ripping up cool places like this,” s.legg said. “I think we’re so eager to trash anything old just to build new and different and neat and expensive.”

Rule first opened in RiNo in May 2011 at 3340 Walnut Street. But the gallery left and went on hiatus in February 2013 after founder Robin Rule was diagnosed with cancer.

“After speaking to her family, we decided it would be a tragic loss if someone didn’t carry it on,” Santerli said.

So Santerli kept it alive with the help of two of Rule’s other former assistants Rachel Beitz and Hilary Morris. The gallery hosted a couple pop-up exhibitions that included one in RiNo. Rule Gallery officially re-opened at 3254 Walnut Street in June 2014. The building dates back to the late-1800s, Santerli said.

“There’s a lot of Art Deco components, we’ve heard there are underground tunnels here. There’s this whole history of a speakeasy,” she explained. “It’s old, it has history, it has emotion in the walls.”

As the RiNo neighborhood rapidly evolves, the art district has adapted to meet the challenges, creative director Tracy Weil said.

“Things change, that’s how the world is,” he said.

Weil co-founded the RiNo Art District in 2005. Back then, the group of artists worked with a budget of $8,000. In 2014, the budget was around $75,000. RiNo now has around $1.3 million. One big reason is that in November the neighborhood voted to create a Business Improvement District.

That places a mill levy that adds a tax increase of about 5 percent on property owners. And that money benefits the creative sector and small businesses. Weil said it was a game-changer for RiNo.

“Developers are now realizing art can activate a community and help fix up an area that may be disregarded and it’s important to keep those artists around, which is great,” he said.

In fact, the art district is working with the developer that bought the site where Rule Gallery stands. The developer has agreed to add some affordable spaces -- $1 to $1.25 per square foot -- for artists, Weil said.

And although Wazee Union and its nearly 60 studios are gone, the Globeville Riverfront Arts Center recently opened with 73 private studios with six more on the way in the nearby Globeville neighborhood. Most of those spaces are now occupied.

Weil also points to Denver’s plan to build a new facility that will provide affordable spaces for artists, musicians and more in RiNo.

But Ice Cube Gallery director Karen Roehl says that’s not a viable solution for her artist cooperative, which left the Dry Ice Factory building in RiNo this summer because of a rent hike.

“They’re not going to be up and running for five years. So there’s nothing they can do for us. We’re being displaced now,” Roehl told CPR News in June. “It’s great, but why would we get excited about something five years down the road?”

Roehl, who also has a work space at The Temple in Denver, has found a new home for Ice Cube Gallery at a new complex called Concept being built on an old farmstead in Commerce City. The first building is expected to open next year. In the meantime, Ice Cube will host a pop-up exhibition called “The No Show Museum” at the site on Friday, Sept. 30.

“Concept is up for whatever ideas we might have,” Roehl says. “We’re broadening the boundaries of where art in Denver is happening.”

Despite the loss of some artists, the RiNo Art District has more than ever, creative director Tracy Weil said.

The RiNo Art District also worked out a deal for Rule to stay in its current building for another year, but the gallery had already found a new space in Denver.

“RiNo has been incredibly supportive, and we’re really sad to leave the district,” said owner Valerie Santerli. “They’re doing a lot more to keep the arts here than people are aware.”

It turns out that relocating is nothing new for Rule Gallery, which has now moved more than 10 times. Santerli says this is a chance for the gallery to reinvent itself when it moves to 530 Santa Fe Drive in September.

“And that’s one thing that Robin Rule taught me," Santerli said. "You have to just keep moving forward."

Editor’s note: We originally reported that the Globeville Riverfront Arts Center has 85 studios. That’s incorrect. The number is actually 73 with six more on the way.