Editor's Note: This story is part of a long-term reporting project from CPR News that explores how climate change is affecting Colorado, what's being done to address those changes and more.

At first, they look like a mirage on the edge of the horizon of southern Colorado’s broad and sweeping San Luis Valley. Then, as you rumble south down Highway 17 through Moffat and the other barely-holding-on valley towns, their wave-like ridges reveal a unique reality.

Finally, as you turn east and head into the Great Sand Dunes National Park and Preserve, mountains of sand tower almost 800 feet over you and the valley floor.

“A piece of Arabian desert transplanted into this plain,” wrote Dr. Friedrich Adolph Wislizenus, in his remembrance of an 1848 expedition to northern New Mexico.

But this isn’t the Arabian Peninsula. Nor is it the coast. These dunes were created in this landlocked valley by prevailing winds that pick up sand and deposit it in the shadow of the Sangre De Cristo mountains. The 30-square-mile dune field offers a view unlike any other in Colorado.

“I would rather go three days around, than travel once more over the sand hills with a wagon,” Wislizenus wrote more than 150 years ago, a thought echoed by many hikers since then.

These days, most visitors will play in the cool water of adjacent Medano Creek before they climb up one or two dunes. Few venture up into the mountains on the eastern side of the dunes. And it’s there the park is investing in an ambitious project that’s symbolic of how land managers are approaching one of their biggest long-term issues: climate change.

In Colorado’s other national parks, the effects are more subtle: warmer temperatures are complicating already difficult climbs at the Black Canyon of the Gunnison. And in Mesa Verde, scientists wonder if the changing climate is affecting the stability of ancient Pueblo ruins. 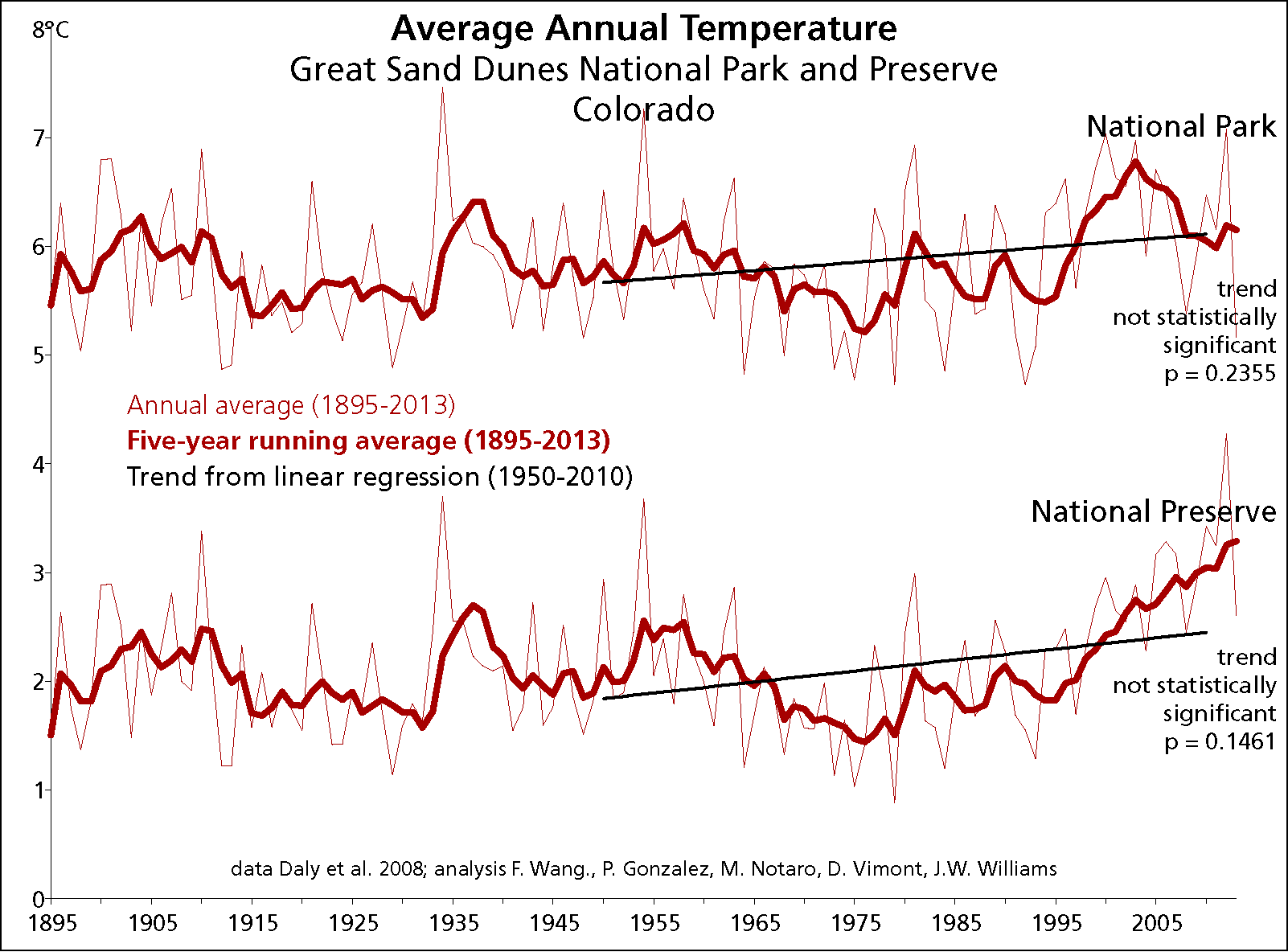 A recent study looked at pikas, a tiny rodent-like mammal that lives on mountain peaks and can die from overheating after just a few hours at eight national parks across the West. Researchers concluded there’s “encouraging evidence” the small mammal will be able to survive at the Sand Dunes.

But one climate model from the National Park Service says that unless the world’s carbon emissions drop by 40 to 70 percent, temperatures at the park could rise by up to 9 degrees by 2100.

Under those scenarios, invasive plants like leafy spurge could move in, streams and creeks could run dry, and wildfires could become more frequent. That has staff at the Sand Dunes thinking hard about how they can help the park adapt to a warming climate.

Which brings us to trout.

One of the park’s current projects is the restoration of the native Rio Grande cutthroat trout to the Sand Creek watershed, which tumbles down the Sangres to the north side of the dunes. Fred Bunch, resource management specialist at the park, said the park has spent about $120,000 on it so far, and plans to spend about double that before it’s all said and done.

But Bunch said the money, which comes from visitor fees, Sand Dunes is spending on the trout project is worth it. It's park service policy to restore native species. And the Sand Creek watershed, wildlife officials believe, is an ideal place for the fish now -- and they hope it will be decades from now as well.

"It's all a function of elevation,” Bunch said. “Higher elevation streams may be a great area for habitat for the Rio Grande cutthroat as we see this climatic variability.”

Andrew Todd, a research biologist for the U.S. Geological Survey in Lakewood, has been collecting data for the Sand Creek project for a few years now. He developed his interest in fish years ago as a kid when his dad would take him and his siblings fishing near Aspen.

For some reason, Todd said, they would always catch a ton of fish. Finally, 10 years ago, his dad ‘fessed up.

"He'd make sure we were on the water right after the stocking truck came through,” Todd said. “So our whole childhood fishing experience was based on a lie."

These days, Todd is devoted to the plight of the Rio Grande cutthroat. The state fish of New Mexico is native to that state and southern Colorado. It was decimated first by miners who overfished it in the 19th century, then by the invasive rainbow, brook and brown trout the miners brought in as replacements.

“Over time, your cutthroat trout population will lose out,” Todd explained. “They interbreed with rainbow trout and they don't compete well with brown and brook trout."

Today, the Rio Grande cutthroat exists only in 10-15 percent of its historic range. It's so rare, in fact, that the Center for Biological Diversity, an Arizona-based environmental group, sued the federal government last month because they want the fish to be protected under the Endangered Species Act.

Taylor McKinnon, public lands campaigner for the Arizona group, said he supports the NPS-led project. He just wants more projects like it.

"This lawsuit is necessary because the fish, despite efforts from a lot of people, is continuing to decline,” McKinnon said. "Endangered Species Act protections will compel a more vigorous recovery program, a more coordinated recovery program. And it will provide the agencies the resources they need to get the job done."

The surviving fish are mostly relegated to small rivers in the Rio Grande basin. Those isolated populations are particularly susceptible to the effects of climate change -- droughts and wildfires can erase them in short order.

Wildlife officials got a scare earlier this summer during the Hayden Pass Fire about 60 miles north of the Sand Dunes. They were worried that another rare cutthroat trout that only lives in one small location in that area actually went extinct because of the fire.

It turns out the fish survived, but that wildfire made the stakes clear.

“If you have a really small stream, just one stream, [with] no tributaries, and it burns you could lose that entire population,” Todd said.

That's not the case at Sand Creek, where nearly the entire watershed is on public land. The area they are trying to restore isn't just one small piece of water. It's a whole self-contained system, from snowmelt-fed lakes to where the creek seeps underground on the valley floor. 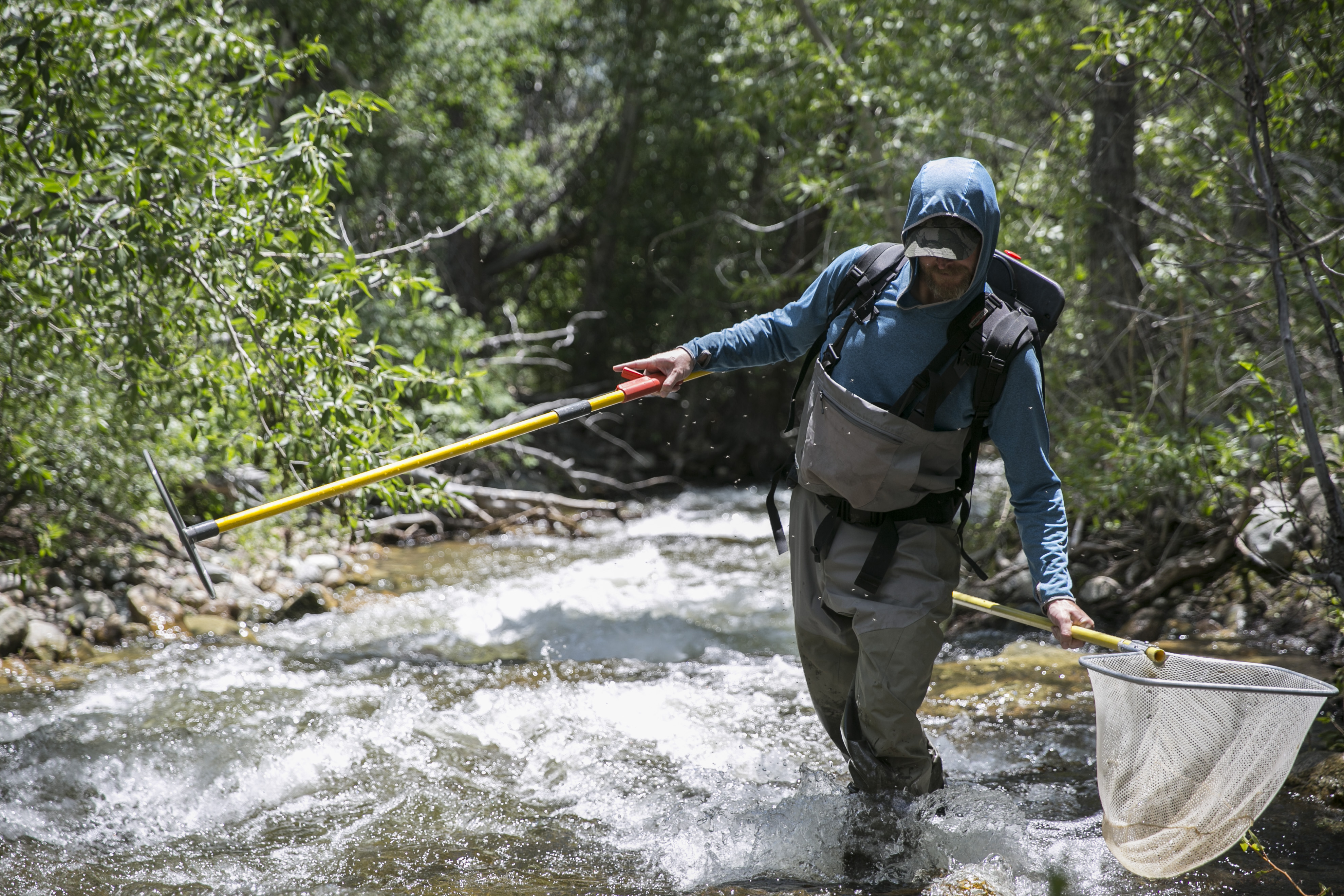 “You could potentially have a fire in there that burned a good portion of the watershed,” Todd said. “As long as it doesn't burn the whole thing, you're well buffered against things like wildfire.”

If the project is successful, Todd said that Sand Creek and its tributaries would make up one of the largest cutthroat trout watersheds in the state.

The water temperature data Todd has collected so far shows promise for the Rio Grande cutthroat. Up at the top of the mountain range, Todd said the sun actually warms Sand Creek quite a bit. But as it falls below treeline, and its colder tributaries dump into it, it gets really, really cold.

"Our standard for cutthroat trout is around 17 degrees [Celsius],” Todd said. “In Sand Creek, where it hits the sand it's about 12 or 13 [Celsius]. So we've got a good 4- or 5-degree buffer before we start to butt up against temperatures here that would preclude trout from being here." 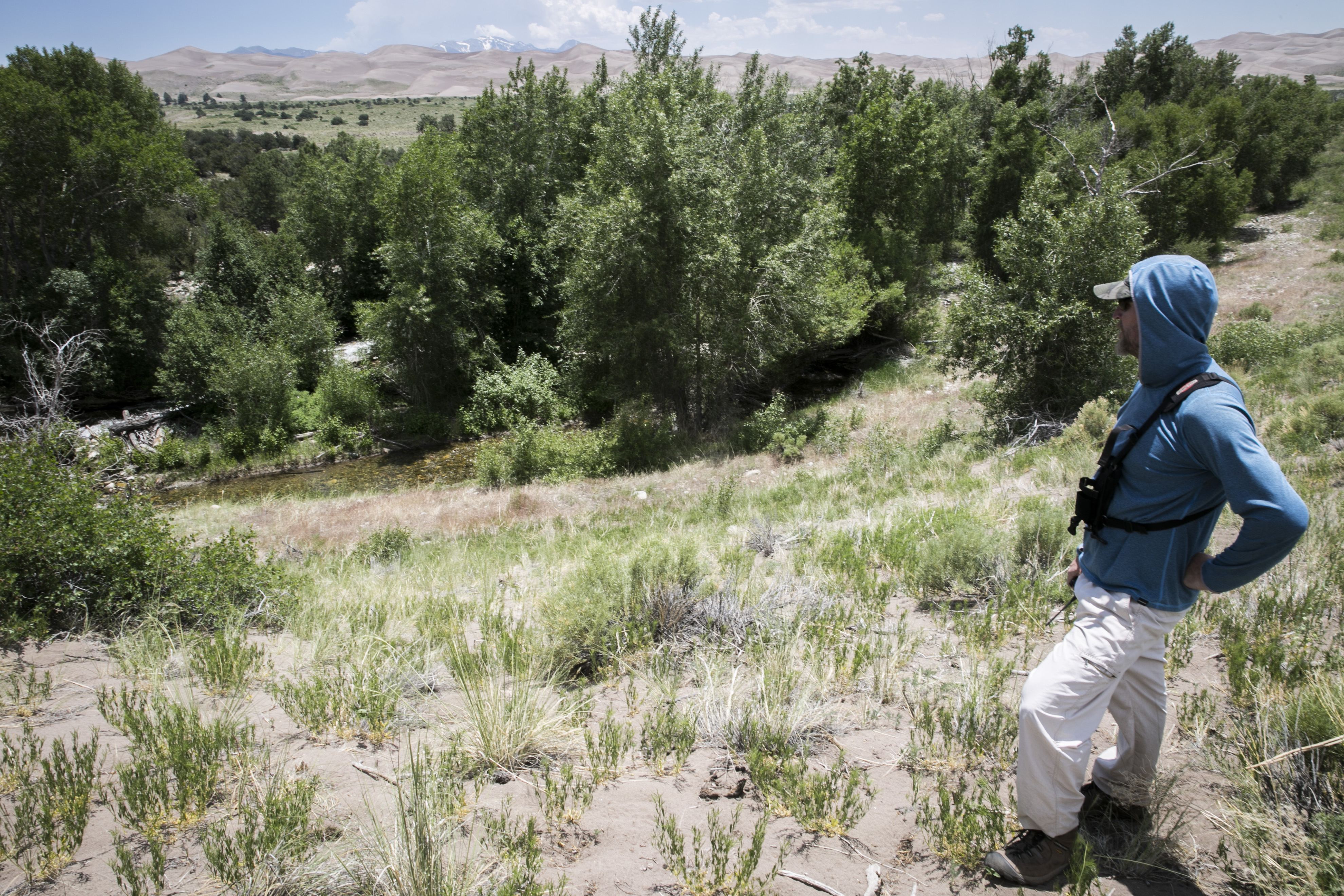 If that kind of change takes place, the Sand Dunes will have “many other problems” to deal with, he surmised.

Killing Many Fish To Save A Few

Eventually, Colorado Parks and Wildlife will remove all the non-native fish from the watershed using a natural pesticide called rotenone. It kills only fish and leaves other wildlife unharmed.

After the creek, its tributaries and the nearby lakes are cleared and restocked with Rio Grande cutthroat, the fish will need about three years to recover. That means anglers who fish the drainage will have to look elsewhere for awhile.

"It's the consequence of restoring,” said John Alves, Colorado Parks and Wildlife’s senior aquatic biologist for the southwest region. "There's drainages nearby that also have trout."

It’s possible that CPW could apply rotenone in stages; a waterfall halfway up the creek provides a natural barrier. So once the top half is cleared, they don’t need to worry about non-natives in the lower part invading again.

It’s also very difficult to reach Sand Creek, which helps keep out “bucket biologists” -- anglers bent on undoing the government’s work by dumping non-native fish back into a cleared waterway. 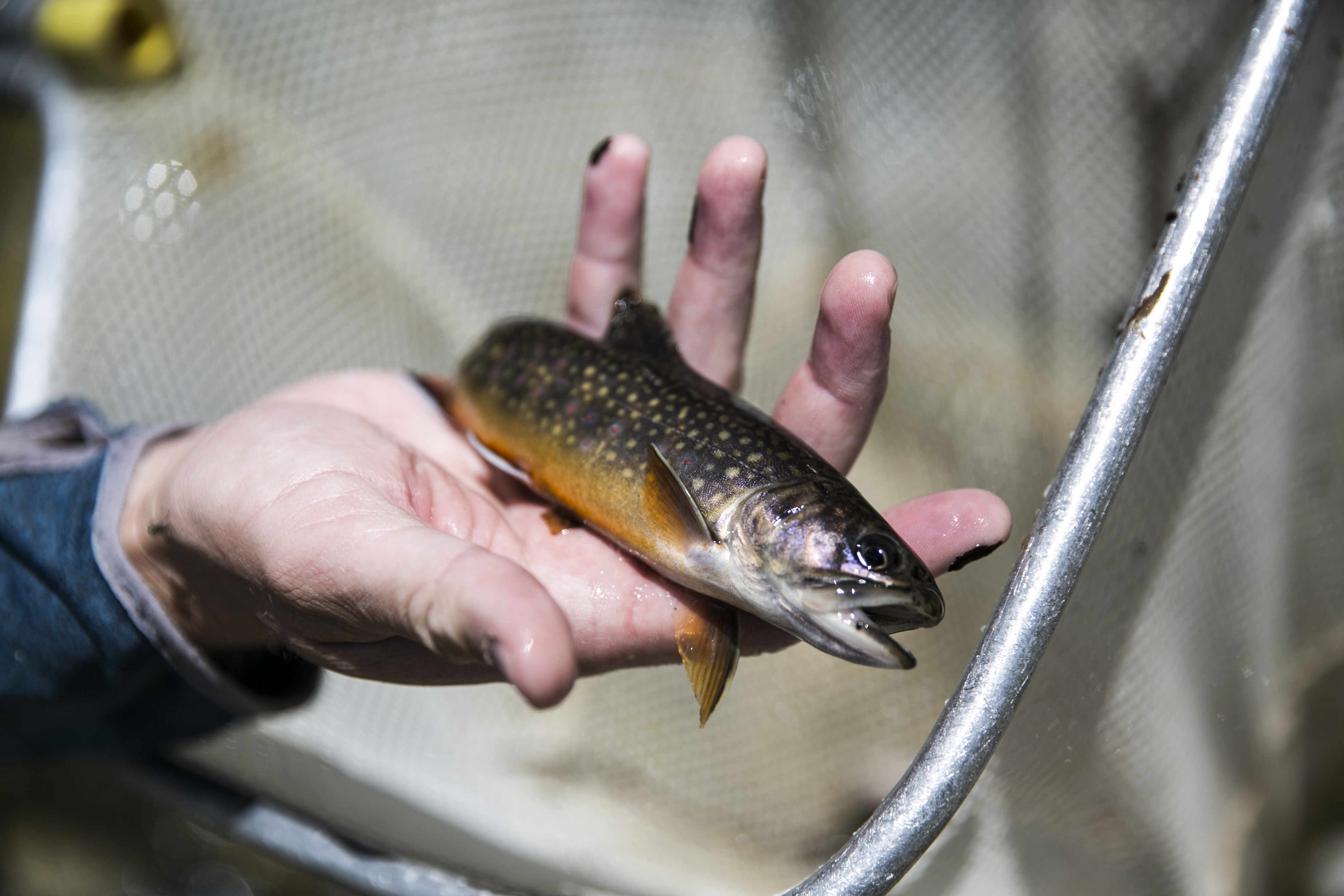 “When you go in and you try to reclaim it for the natives, not everyone is always on board," Todd said.

The whole idea of killing off a watershed is off-putting to at least one angler. Phil Armstrong has fished there for more than decade and said while he can appreciate the desire to restore a native fish, he’s disheartened by the “heavy-handed tactics” the state will use.

"Nothing natural is left in this state. People have been everywhere. Mining has been everywhere,” he said. "We're only taking human intervention steps to get to some approximation of that. We don't know what that watershed was like a hundred years ago.”

Andrew Todd concedes that point. He doesn’t have proof that Sand Creek historically held Rio Grande cutthroat. But philosophical arguments aside, Todd said the important thing is to strike a balance between native and non-native fish.

“We need to decide what level of biodiversity we want to protect,” Todd said. “It's one of the prettiest fish in Colorado. And I think it's worth preserving."

The project is something of a sequel for the NPS’ Fred Bunch. The park restored Rio Grande cutthroat to Medano Creek using similar tactics back in the 1980s and 90s. Bunch said he’s excited to expand anglers’ chances of catching a native trout even more -- especially given that their dollars are paying for the Sand Creek project.

“If this species is restored to 12 miles of prime habitat, that is a huge victory,” he said.

Bunch said he wants anglers to be able to count on a “consistent experience” at the park and preserve. With the climate forecasted to be anything but consistent, what the National Park Service does now, in southern Colorado and elsewhere across the country, faces its real test in the decades to come.

Editor's Note: An earlier version of this story incorrectly said pikas were rodents. While they may look rodent-like, they are actually more closely related to rabbits. Both belong to the taxonomic order Lagomorpha, while rodents are of the order Rodentia. We regret the error.