Arapahoe Basin will soon get bigger. The White River National Forest on Monday gave the green light to an expansion plan for the Summit County ski resort.

The expansion will open up about 338 acres of skiing terrain in an area just west of the existing boundary known as the Beavers. Skiable acres will grow from about 1,000 to more than 1,300.

"It feels really good to be done with the EIS," Alan Henceroth, COO of Arapahoe Basin, said, referring to the environmental impact statement process that he said took about five years to complete. "[But] there's a lot more work to go."

See a map of the expansion plan: 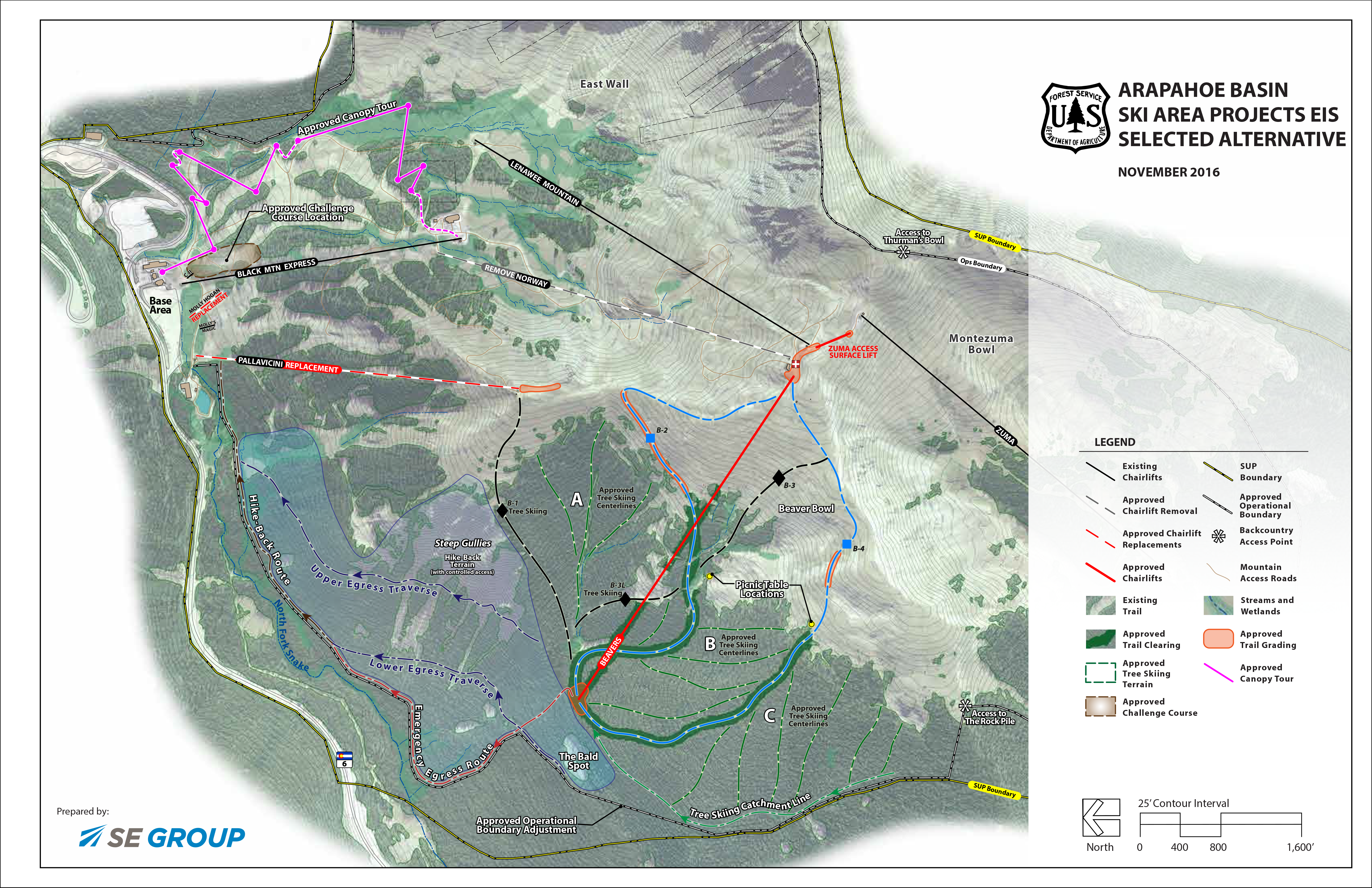 Henceroth said construction should start sometime next spring, though the exact details are still fuzzy at the moment.

"The project is going to take us a couple of summers to build," he said. "We'd like to get started on it as soon as possible. We can't quite say a start date yet -- we're waiting to get some of those other pieces in line."

Friends of Arapahoe Basin, a citizen group opposed to the expansion, said in an official objection letter that it will harm the environment “all in the name of profit.”

“From the Lynx habitat, Boreal Toad, Big Horn Sheep, migratory birds, all are being marginalized in Summit County as the ski industry pushes harder and further into the wild forest,” the group wrote in August.

"We did a lot of these things in the effort to minimize the environmental footprint," he said.

Friends of Arapahoe Basin's Colleen Merrick, a local nurse who's been riding the resort for more than a decade, said she's concerned about overcrowding.

"All these people with Vail passes get played out at Breckenridge, at Keystone, at Vail, and then they come to the Basin as a second resort and flood the Basin," she said.

A-Basin was a special place for locals, she said. But because of the expansion she won't buy an A-Basin pass this year.

"I feel really let down," she said.

Fitzwilliams said the Forest Service expects usage to increase only slightly. More likely, Henceroth added, was that the expansion will help with congestion issues.

"It's going to do a great deal to retain the character of A-Basin because it's going to do such a good job of spreading people around," Henceroth said. "We're going to keep lift lines small and slopes uncrowded."

Merrick said her group wants to seek a court injunction to stop the expansion.

"It all felt rubber stamped from the beginning," she said.

This could be the last major expansion of a ski resort in the White River National Forest. Most resorts' skiable boundaries are butting up against their "special use" permitted boundaries, Fitzwilliams said. Breckenridge, for example, added more than 500 acres of skiing terrain in 2013.

"We don't have much more room," Fitzwilliams said.

Henceroth said other than a few slivers of unused land here and there, A-Basin will soon be at its special use permit boundaries.

"This is it for a while," he said. "Probably a long while. We have nothing else brewing for expansion at this time."

That's one reason why resorts are turning their attention to summer adventure tours to increase profits. Special use permit boundaries would have to be redrawn for a major expansion -- and Fitzwilliams said that's not likely.

"I would question the need. There's a limit," he said. "You can't just connect them all."

Editor's note: An earlier version of this story incorrectly stated that a zip line would be part of the project. Plans for that were dropped.