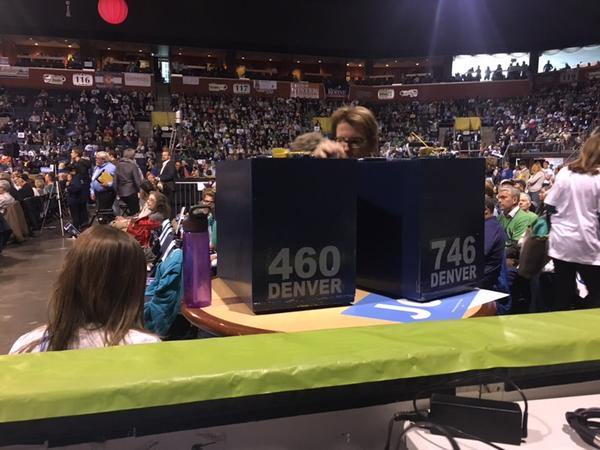 Sandra Fish for KUNC Ballot boxes at the Democratic state assembly in Broomfield. 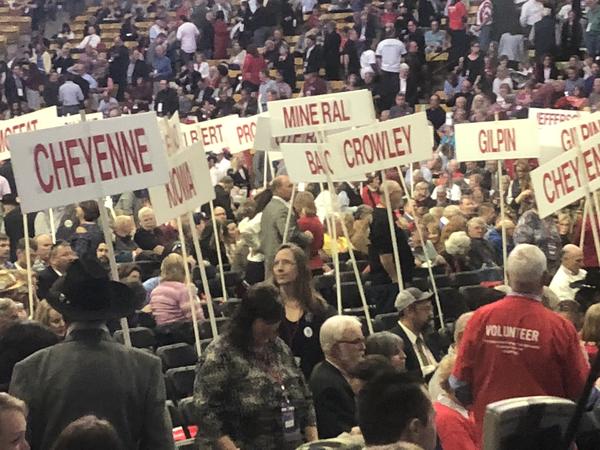 Bente Birkeland / Capitol Coverage Delegates on the floor of the Coors Events Center at the Republican state assembly.

Crowded fields -- especially in the race for governor -- narrowed considerably after Colorado's Democratic and Republican state assemblies on Saturday, April 14.

Republicans nominated Treasurer Walker Stapleton with 44 percent of the vote and Greg Lopez, former mayor of Parker and former state director of the Small Business Administration, with 33 percent of the assembly vote.

Businessmen Victor Mitchell and Doug Robinson are both waiting to see if they gathered enough petition signatures to make the primary ballot.

Controversy at the GOP assembly

Controversy swirled at the GOP assembly held at the University of Colorado Boulder's Coors Events Center.

Days before the assembly, Stapleton withdrew his validated petition signatures because of allegations of impropriety and decided to go the assembly route.

Saturday, in her speech to delegates as attorney general, Coffman brought up Stapleton's 1990s DUI. Anti-tax crusader Douglas Bruce handed out flyers criticizing Coffman for being divorced and never having children.

Riley Buford, a youth pastor and delegate from Ordway, said he came into the day undecided.

"I base my decisions on moral issues of the day, so I look at moral issues," he said. "Definition of marriage and abortion and just the way that we've been spending out money in this state. I'm going with Greg Lopez. I like his stance."

Scout Ennis, a Boulder delegate, worried that her party isn't fired up enough for the general election.

"I think there's been way too much infighting that has led to failure for the conservative slate," Ennis said, adding of Stapleton, "I think a lot of people are throwing their support behind him just because he has the money, he has the name recognition. I don't see a lot of enthusiasm for him."

The Democratic assembly in Broomfield, on the other hand, was a congenial and enthusiastic affair. Current officeholders noted a lack of infighting among their candidates. Chants of "blue wave" often echoed at the 1st Bank Center.

Kennedy and Polis took the stage together to support Secretary of State candidate Jena Griswold. Party Chairwoman Morgan Carroll noted that Democratic candidates had avoided criticizing one another for the most part.

Christopher Nicholson, a Boulder County delegate, cast his ballot for Polis, who would be the first openly gay man elected governor in the nation.

"Colorado has an opportunity to send a message to the entire country that it stands for inclusion," Nicholson said. "I came out when I was 15-years-old as a gay man. Over the last 16 years, I've never had the opportunity to vote for someone like me for high political office."

Millie Perez is a first-time delegate and former Puerto Rico resident who now lives in Security Widefield in El Paso County. She supported Kennedy, though she said the candidates were similar on the issues.

"I like her because she is looking forward for a bright future for our sons and for our grandsons and for the benefits of all Colorado," Perez said. "They have almost the same perspective, but Kennedy has more spunk."

Although Kennedy came out on top at the assembly, Polis is aiming to spend millions of his own money, with about $1 million in ads scheduled before the primary.

Kennedy said that doesn't worry her.

"I have people all across the state who are helping support my campaign financially," she said. "I will have the resources to win this election."

Carroll ruled the assembly a success but said the party isn't taking anything for granted.

"They were motivated, they were passionate," she said of the 3,000-plus delegates. "They're not assuming a blue wave, they're ready to work for it."