Even in the digital age, TV is still king — at least when it comes to political advertisements. But the way some of those ads are paid for and reported leaves more questions than answers.

The governor’s race could easily be the most expensive state campaign in Colorado history, but because many of the candidates have super PACs raising money and making ad buys, much of the TV spending will not be open to the public. TV stations are not required by the Federal Communications Commission to disclose the contracts.

Democrat Jared Polis doesn’t have a PAC, and so all of his spending is public record. We can tell how many ads he’s running in Colorado: nearly 5,000 spots on broadcast TV alone. We can say where the spots are running: in every major metro across the state. And we can say he’s spending more than $2.4 million through next month.

But we know almost nothing about how PACs supporting his fellow Democratic challengers, Mike Johnston and Cary Kennedy, are spending money. The same dynamic is playing out on the Republican side, where Victor Mitchell is self funding, and all of his ads are reported by stations. His challengers, Walker Stapleton and Doug Robinson, have PAC support, and those TV ad contracts aren’t posted — unless by mistake.

The federal law that regulates broadcast licenses says stations don't have to post that information because these groups aren’t officially part of the candidate’s campaign.

PACs can raise unlimited amounts of money, but can’t coordinate with campaigns. About half the candidates running for governor have PACs supporting them.

“They’re becoming common,” adds Perkins. “And one thing that troubles me a little bit... the degree to which people just take it for granted that it’s the candidate’s PAC, and legally it’s not supposed to have anything to do with the candidate.”

Some candidates’ campaigns, like Cary Kennedy’s, post b-roll footage online where it can be found and used by supporting PACs. The two organizations are not supposed to communicate.

It’s clear to anyone with a TV that PACs are spending millions of dollars on ads, but we’ll likely never know the details. Still, campaigns say TV stations readily give this information to them. So the campaigns know what their challengers are spending, but the stations withhold the information from the public. Stations CPR News contacted either didn’t respond to requests for comment or declined interviews.

A spokesperson for KCNC, the CBS affiliate in Denver, disputed that campaigns get access to this information. “We do not share advertising sales information with other clients, agencies or anyone else,” the spokesperson said in a statement. 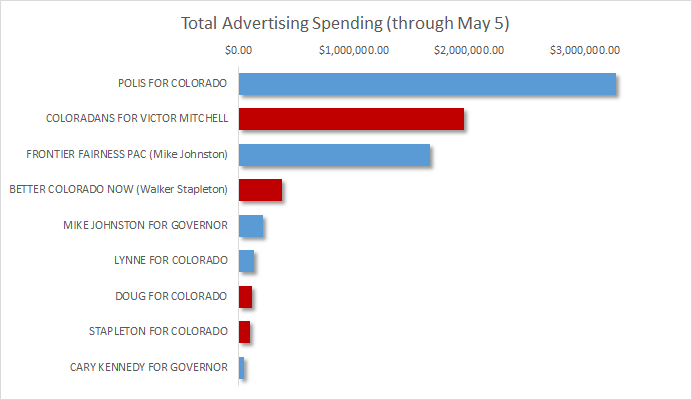 Meredith McGehee, executive director of Issue One, which advocates against the role of money in politics, says the Colorado legislature could do something about this.

“A state government does not regulate a federal licensee like a television station,” says McGehee. “However they could place a requirement on anyone running for state office to make these disclosures.”

The groups do have to disclose basic expenditures. We know the PAC supporting Democrat Mike Johnston, Frontier Fairness, has spent $1.6 million on advertising. But that’s all the detail we have. We don’t know how much is going to TV or radio or social media. A representative for Frontier Fairness didn’t respond to requests for comment.

McGehee says the right to know where the money is spent is important, and states like California and Massachusetts have passed laws to require more disclosure than federal law requires, even requiring top donors be listed on the actual TV ad.

“It’s not in anyway a restriction on the speech or any kind of requirement for what can be said or any kind of censorship,” says McGehee. “It's simply saying, ‘let’s give American citizens this information so they can make up their own mind.’ It's a fundamental principle that started back in the 1920’s when radio was first invented.”

But that principle is not shared by Colorado’s TV stations. Channel 7, the ABC affiliate in Denver, was posting the details for commercials from super PACs in the governor’s race. We reached out to ask them why. They had no comment, other than to say the contracts would be removed from the website.