A colored photo of a southwestern rug practically jumped off the page of the Pueblo Chieftain classifieds in July and early August. The headline advertised a “rare” and “must-see” textile.

The rug had several columns, with bright red squares down the center and a few lining the edges of a neutral-colored background. At first glance, the square-shaped symbols looked like swastikas — a symbol Hitler’s Nazis made synonymous with death in World War II.

But, as it turns out, they weren’t swastikas at all. They’re sacred Navajo emblems that pre-date World War II known as the “whirling log,” “falling log,” or “swirling log.” It looks like a cross with shorter 90-degree-notches at the end of each line, creating a swirling shape.

The symbol all but disappeared from Navajo artists’ wares after the 1930s, making it extremely rare these days. Leonard Brown of Pueblo, the owner of the rug in question, said it took him more than a decade to convince a woman to sell it to him.

“This rug looks exactly like it did when it was made 110 years ago,” he said. “There’s nothing wrong with it.”

Brown has been buying, selling, trading and collecting items for decades. He’s selling parts of his collection now because he’s moving out of state.

Brown, who's nearly 80 years old, is selling the rug for $5,000. His walls now have empty spaces where other rugs, photos and paintings once hung.

“You missed a whole bunch of stuff,” he said, pointing out holes in his still-massive collection. “Part of my kitchen cabinets I had to reinforce because I had so much weight up there.”

But Brown said it’s this rug’s design that’s attracted quite a bit of interest, including from this reporter. He said he's had to correct callers who believe the symbols are swastikas.

The sacredness of the “whirling log” makes it challenging to get some Native Americans to speak to non-Natives about the subject. That’s according to Edison Eskeets, a trader at The Hubbell Trading Post, a national historic site and the oldest operating trading post on the Navajo Nation and in the United States. Several Navajo artists were contacted and either didn’t respond to requests or hung up the phone when asked to speak about the symbol’s significance.

Eskeets said the whirling log represents humanity and life and is still used for healing in hundreds of Navajo ceremonies.

“It kind of has everything on it,” he said. “It represents the constellation, the moon, the sun, the equinox. It’s down to the earth, the four directions, the rotation of mother earth, all of that … it’s the rotation of life.”

It’s been debated on whether or not the sacred symbol rotates to the left or right. But Eskeets said that for the Navajo, it goes in both directions. The four sacred mountains — Blanca Peak and Mount Hesperus in Colorado, Mount Taylor in New Mexico, and the San Francisco Peaks in Arizona are also represented in the symbol. 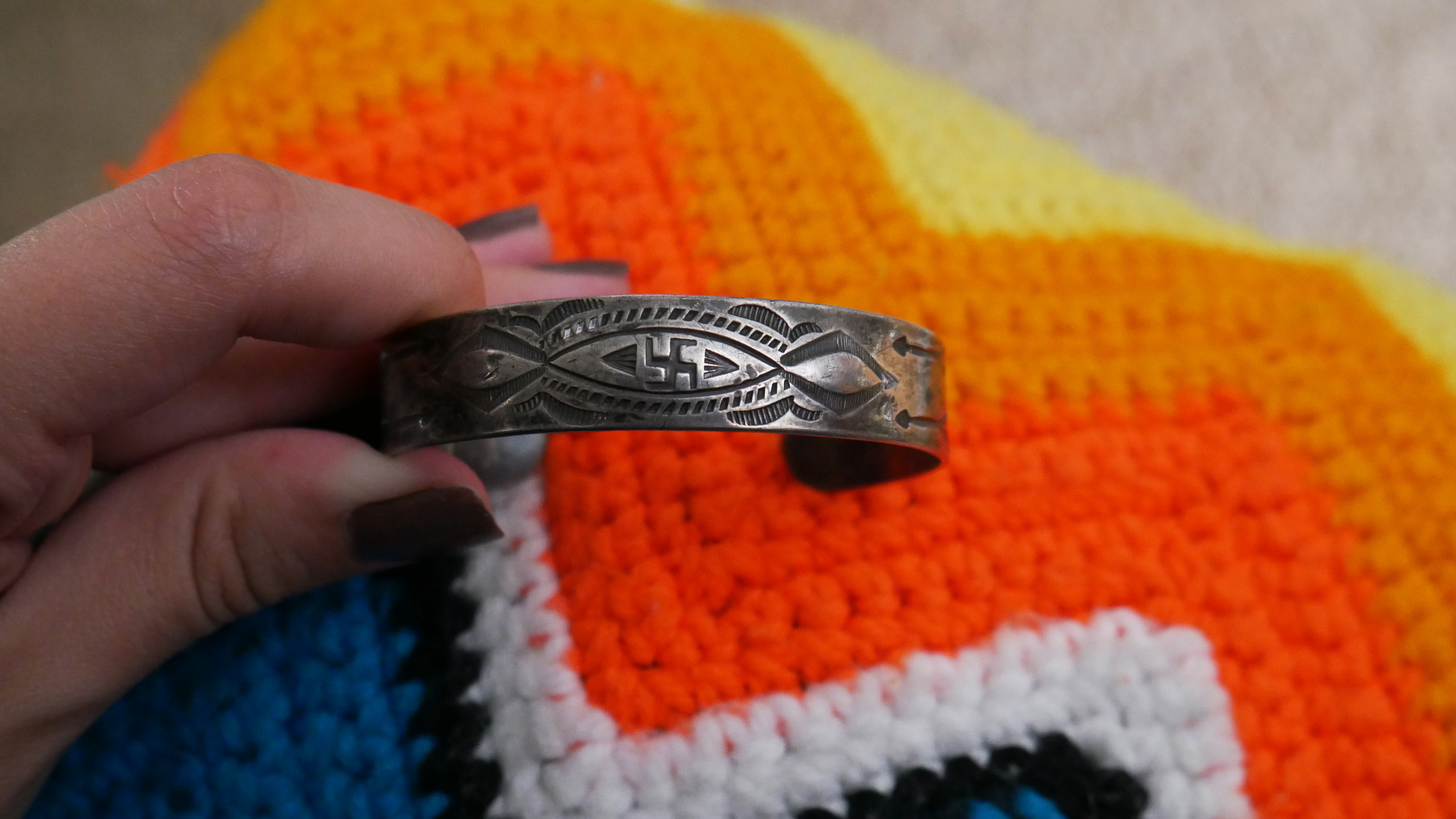 A number of other cultures and indigenous groups besides the Navajo also use the design, including Mayans, Tibetans, Indians, Asians, Hindus and more.

“That symbol is not just our symbol. It’s a universal symbol,” Eskeets said.

During World War II, Eskeets said the U.S. government asked the Navajo to “hold off” on using the symbol. So for an unknown amount of time, Eskeets said metalsmiths, weavers and other artists stopped incorporating it into their work. That helped create the misconception that items with a whirling log are no longer being made at all.

“There are plenty — hundreds and hundreds of Navajo textiles with the whirling log in it, but they all ended in the 1930s,” said Alexander Anthony, owner of Adobe Gallery in Santa Fe, which specializes in contemporary and historical southwestern art.

But Eskeets said the symbol never really went away entirely. Some Navajo artists use the symbol in their work today. The Hubbell Trading Post sells a number of brand new rugs with the whirling logs on it.

Anthony’s gallery also has an old piece of pottery and bracelet with the emblem on it. The going rate for these older items can be from a few hundred dollars to $20,000, he said. And just because a handful of the goods in circulation are more than 50 years old, doesn’t necessarily mean they’re more valuable. The condition of the item matters more.

Brown advertised the rug for several weeks and has yet to sell the textile. Anthony said plenty of collectors are aware of the symbol’s history and appreciate Native American art. But, he said, it’s important for any sellers and interested buyers to know the story behind the whirling log — and understand when and why a piece was made.